Audrey Bland and Charles Wilson, both U.S. Army Veterans, both stay in temporary housing at Veterans Place in Pittsburgh. Wilson testified to state lawmakers about the program that helps prevent homelessness on Tuesday. 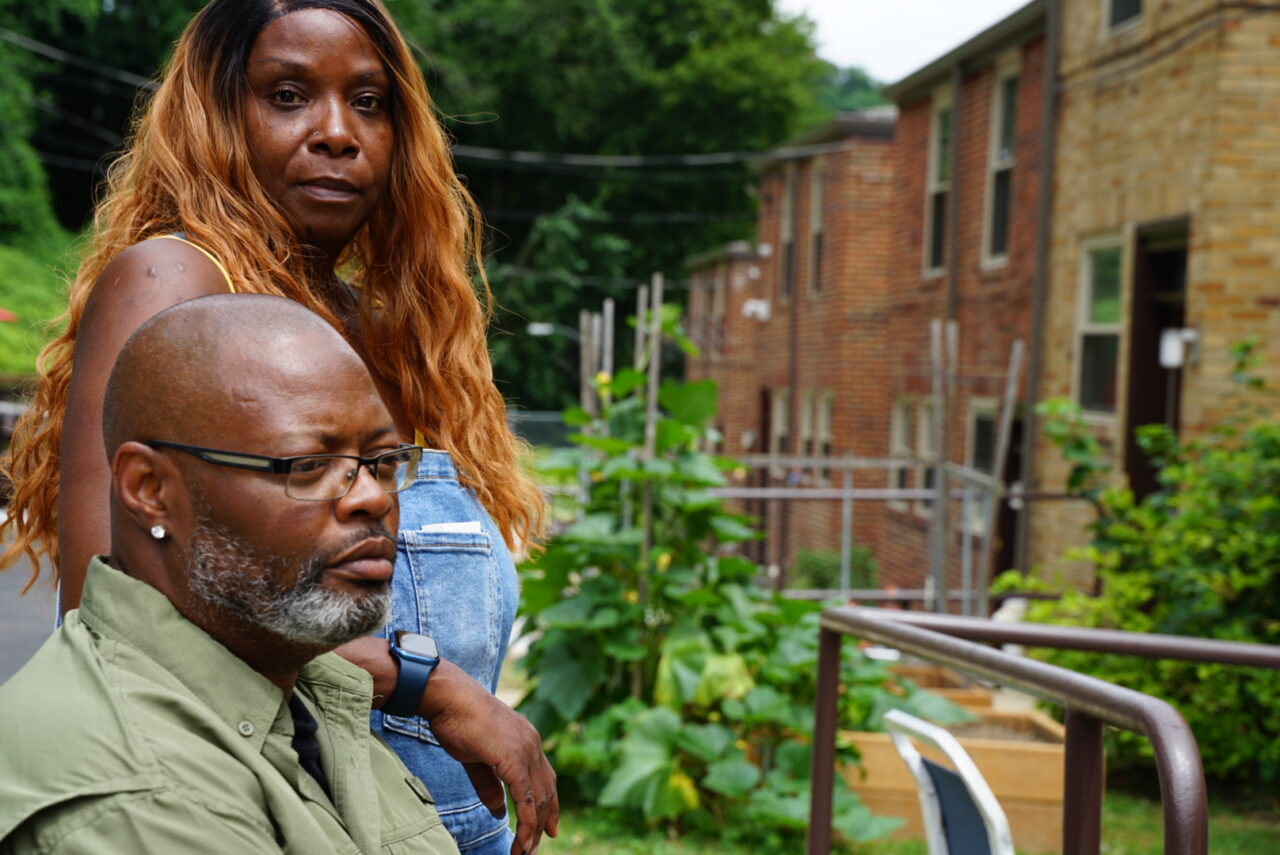 Audrey Bland and Charles Wilson, both U.S. Army Veterans, both stay in temporary housing at Veterans Place in Pittsburgh. Wilson testified to state lawmakers about the program that helps prevent homelessness on Tuesday.

Timothy Martin had been planning to make the military his career. But that ended when he was hit with an enemy’s rocket-propelled grenade.

“Upon my exit there was no transitioning programs. There’s no skill bridge. There’s nothing like that,” he said. “It was, ‘Here’s your exit papers, Good luck.’”

So, he drove in his car until he ran out of gas. That happened to be in Pittsburgh, where he began living out of his car and showering at a Planet Fitness. But eventually he found a new mission: ensuring that veterans got more help than he had. After working his way to a master’s degree in social work and serving in Veteran’s Affairs, he was named the Chief Veteran Affairs Officer in Allegheny County in April.

And on Tuesday he told a visiting group of state lawmakers what he’d learned on the way.

In a system where case managers often have 70 or more veterans to help return to civilian life, he said, “People are going to fall through the cracks.”

“I’ve been doing this for a decade now, and I see veterans today that I saw 10 years ago,” he added. While homelessness was the most immediate concern, “You’re not addressing the issues that put them in the homeless situation. So they’re going to cycle through.”

There are around 50,000 homeless veterans across the country, about 1,000 in Pennsylvania and 100 in Pittsburgh, according to recent estimates. And Martin was among eight local officials urging the six-member panel of lawmakers to help provide more than housing.

‘People are literally dying’
The hearing took place at Veterans Place, a Pittsburgh nonprofit with 48 apartments and 13 townhouses available to veterans, along with variety of programs to help them avoid homelessness again.

Rob Hamilton, the executive director of Veterans Place, told lawmakers that it has taken 18 months to get all the approvals needed for eight additional living spaces for individuals with unique disabilities or gender identities that aren’t served by their current housing.

“That’s insane,” he said. “In 18 hours they could die. We’ve had overdose deaths here… People are literally dying to get into these rooms.” 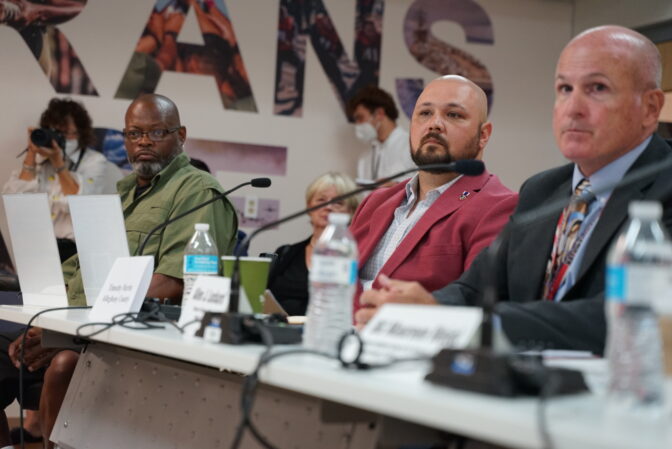 Timothy Martin (second from the right), the chief veterans affairs officer in Allegheny County, testified to state lawmakers Tuesday about what can be done to reduce veteran homelessness.

Hamilton and others cited a number of everyday challenges facing veterans and those who serve them.

Pension programs have income requirements that are too strict, while a housing voucher available to veterans provides a maximum of $700 a month — not enough for more than substandard housing, often located in areas where they might be tempted to become involved in drug abuse.

For any veterans who served before 2001, it can take up to a year to receive the paperwork they need to receive their benefits. And it takes many months for veterans to find psychologists or therapists — a problem is particularly acute in rural areas with few options.

But participants said they had seen improvements. A new statewide portal, PA VETConnect, is making it easier to veterans to find resources. And a special COVID aid program increased the amount residential facilities receive from around $60 per day to $160 per day for each veteran they house. Hamilton urged lawmakers to get in touch with federal leaders to keep the rate at $100 per day.

Weigl also said the federal government should notify states when a new veteran moves in.

“Unfortunately I can’t tell you where all our veterans are,” she said. “We don’t have as great a database as we should.”

‘It’s part of a community’
Such cooperation can make a huge difference.

Allen Lockard, the director of Veteran Affairs in Indiana County, said the agency couldn’t find any homeless veterans when they did a search last year. He attributed that success in part to the collaboration of 18 different agencies and nonprofits who meet regularly to identify ways to help veterans.

Meanwhile, Sally Mounts, the chief development officer for City Mission of Washington County, says her Christian-based recovery program has been successful in part because she doesn’t have to follow as many government regulations. The program receives about $5 million in donations and $3 million through several thrift stores it runs. Mounts said that allows the agency to avoid the bureaucracy of a government-funded program. 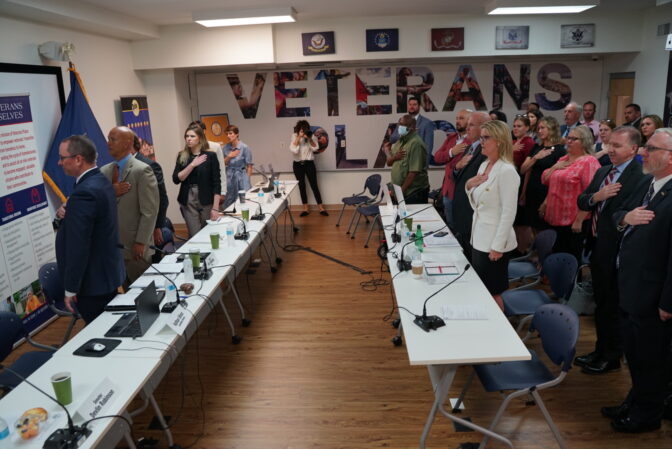 Advocates in Southwestern Pennsylvania who work with homeless veterans testified to state lawmakers that they owe it to help serve these veterans after the veterans served the country.

“As a Christian organization, we can sort of write our own rules,” she said. “And we had people who stayed at our mission as long as four years.”

The program has 130 staff, all of whom are Christian, to serve about 150 residents. The program doesn’t require clients to be Christian, but does encourage it. And the staff will kick out people who start using drugs.

Hamilton, the executive director of Veterans Place, said his organization takes the opposite tack for some veterans, following what he calls an evidence-based, harm-reduction approach. Veterans Place will offer housing to people who are on medication-assisted treatment or still using drugs, as the organization works to address their needs.

One nonprofit is trying something new. William Reed, a board member for Veterans Outreach, spoke about a small therapeutic village made up of 15 “tiny houses” currently under construction in Harrisburg.

Reed said that this community was directed at veterans for whom traditional programs don’t work. The goal is to help them develop a sense of connectedness.

“Because it’s part of a community and not a blue tarp on the Interstate 83 bridge,” he said, “there’s other people there who are going through the same thing.”