An abortion-rights opponent kneels next to a group of volunteer clinic escorts outside Allegheny Reproductive Health Center, located in Pittsburgh's East Liberty neighborhood.

Pittsburgh poised to become an abortion battleground if Roe falls

If the U.S. Supreme Court strikes down the constitutional right to abortion, Pennsylvania could see more people from other states coming for abortions. 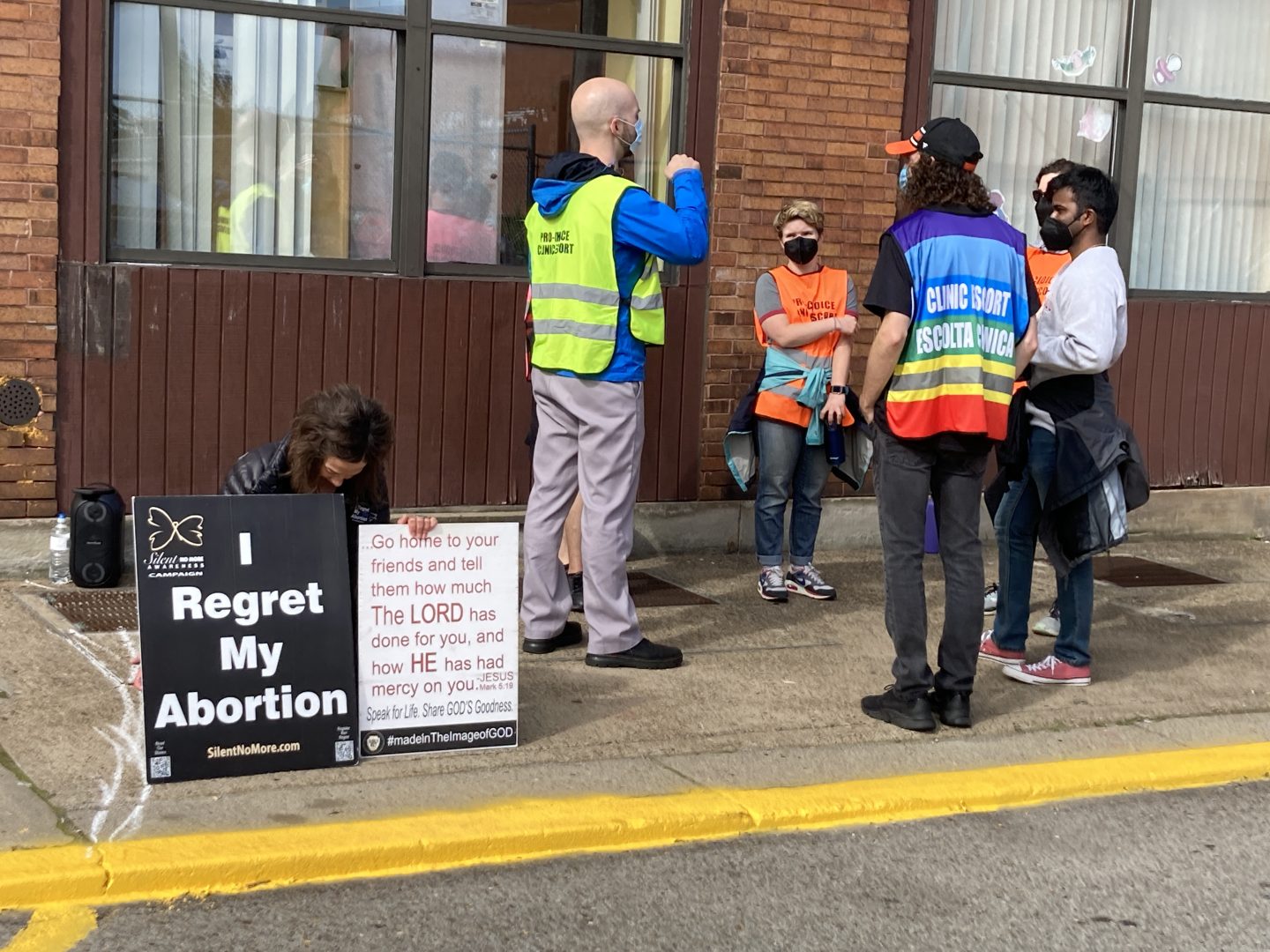 An abortion-rights opponent kneels next to a group of volunteer clinic escorts outside Allegheny Reproductive Health Center, located in Pittsburgh's East Liberty neighborhood.

Most patients who come to Allegheny Reproductive Health Center seeking abortion care arrive in cars with Pennsylvania license plates, according to volunteer Laura Horowitz who greets patients outside the medical clinic.

“Sometimes we see West Virginia, sometimes Ohio, occasionally New York,” said Horowitz. “But we are expecting that to change.”

But if the U.S. Supreme Court strikes down the constitutional right to abortion, as it is expected to do, Horowitz might regularly start seeing cars from as far away as Michigan and Kentucky. And because Pennsylvania is a deep purple politically, abortion providers here may be in a precarious position as conservative lawmakers and prosecutors in other states could try to stop their constituents from seeking abortions elsewhere.

When a Supreme Court draft opinion of a Mississippi abortion case leaked this May, it portended a new reality for abortion access in the U.S.

Legal experts predict that in the coming weeks a majority of justices will vote in favor of some version of that opinion, thus returning the question of abortion to the states; more than half are likely to outlaw the procedure.

When that happens, “We’re gonna see a ton of litigation that comes about from states trying to impose their own values across their borders,” said Greer Donley, who specializes in abortion and contraception at the University of Pittsburgh Law School.

Statehouses are already debating these issues.

This spring, the Missouri legislature seriously considered but didn’t pass a bill that would have allowed private citizens to sue someone who helps a Missouri resident get an out-of-state abortion. On the other side, Connecticut altered its extradition statute to protect abortion providers from out-of-state summons.

Donley notes that California, New York, New Jersey and Illinois are all considering laws similar to Connecticut’s, “But in Pennsylvania, we’re not going to be able to pass that unless something dramatic shifts in the legislature.” 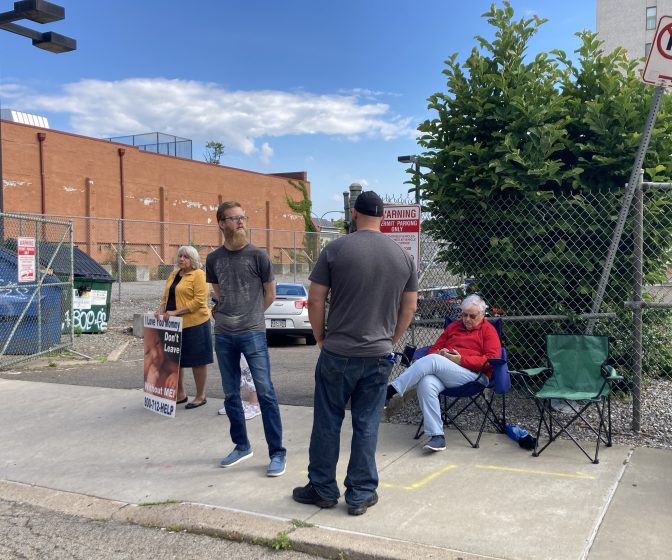 This leaves Pittsburgh providers to fend for themselves in a potential post-Roe landscape.

Clinics in this city are predicted to become a hub for abortion care for thousands of people from across the Midwest and Appalachia.

And these patients could bring with them the threat of interstate litigation.

Abortion has dramatically changed in the near half-century since it became legal. Today, most elective terminations are achieved via a two-pill regimen.

The portability of medication and a patchwork of state laws could create a host of confounding legal questions.

For example, Ohio will likely ban abortion, which will cause residents from that state to travel to Pittsburgh for abortion care. It’s plausible for a person in Cleveland to drive two hours to Pittsburgh, pick up medicine to terminate their pregnancy, but not take the medication until they return home.

“Did [the abortion] occur in Pittsburgh, where the pills were obtained? Or did it occur in Ohio, where the fetal tissue was expelled?” said Donley.

Then there’s the question of personhood that gives fetuses certain legal protections. Could a Pennsylvania abortion provider be charged with homicide or conspiracy to commit murder in another state? And how long would a pregnant person have to reside in a different state for a prosecutor to bring charges against the Pennsylvania abortion provider?

“States, based on the leaked opinion, are going to have pretty wide latitude to try to legislate to extend laws across borders,” said Rachel Rebouché, interim dean of Temple University’s law school.

Rebouché co-authored an article with Donley and Cohen that comes out next year in the Columbia Law Review on this topic. “I think we should expect the unexpected.”

Once the Supreme Court delivers its ruling, it will likely open up an area of law that’s undeveloped and in flux.

“We will be absolutely very busy over the next couple of years,” said Sue Frietsche, a senior attorney at the Women’s Law Project, which provides legal counsel to western Pennsylvania’s two abortion providers.

This point is one of the few where opponents and supporters of abortion rights find agreement.

“We’re looking at unbroken ground, and so that makes it very hard to predict,” said Laura Echevarria, the press secretary for the National Right to Life Committee. The organization opposes abortion and has affiliates in all 50 states.

Legislation that restricts abortions, including the Texas law that allows private citizens to sue providers, is increasingly passing judicial muster. Initially, experts wondered if the legislation was constitutional, but it’s withstood challenges in state and federal courts.

Criminal defense attorneys are already raising concerns about the potential criminalization of abortion. .

Though she says nothing is off the table, Echevarria anticipates efforts targeting out-of-state providers will focus on civil penalties. One possibility is laws that permit a person to seek monetary remedies if they need emergency medical care after an abortion.

But these interstate legal battles might lead abortion providers to decide that caring for out-of-state patients brings too much liability, warns Drexel’s David Cohen. “They’re going to have to engage in a risk assessment.”

Pennsylvania geographically is sandwiched between East Coast states that are looking to protect abortion access and Midwest and Southern states that want to restrict it. Politically, the Keystone State is also in the middle, so the right to abortion may not always be assured.

Currently, the state’s Democratic Gov. Tom Wolf will veto any legislation that restricts abortion access, and Republicans don’t have a wide enough majority to override his veto. But due to term limits, Wolf has less than a year left in office.

Abortion laws could remain unchanged if Pennsylvanians elect Democrat Josh Shapiro in the fall. If Republican Doug Mastriano wins, then the right to an abortion could evaporate when he takes office in January.

“This story is getting written right now,” said Frietsche of the Women’s Law Project. “The way the ending comes out will depend on what people do between now and a couple of years from now.”

A majority of states are expected to make abortion illegal if Roe is overturned, so if abortion access does go away in Pennsylvania, the consequences of this will extend far beyond the commonwealth.

Philadelphia is among the 2026 World Cup cities. FIFA predicts US `No 1 sport'