Sales of body armor are on the rise. Who’s buying and why? 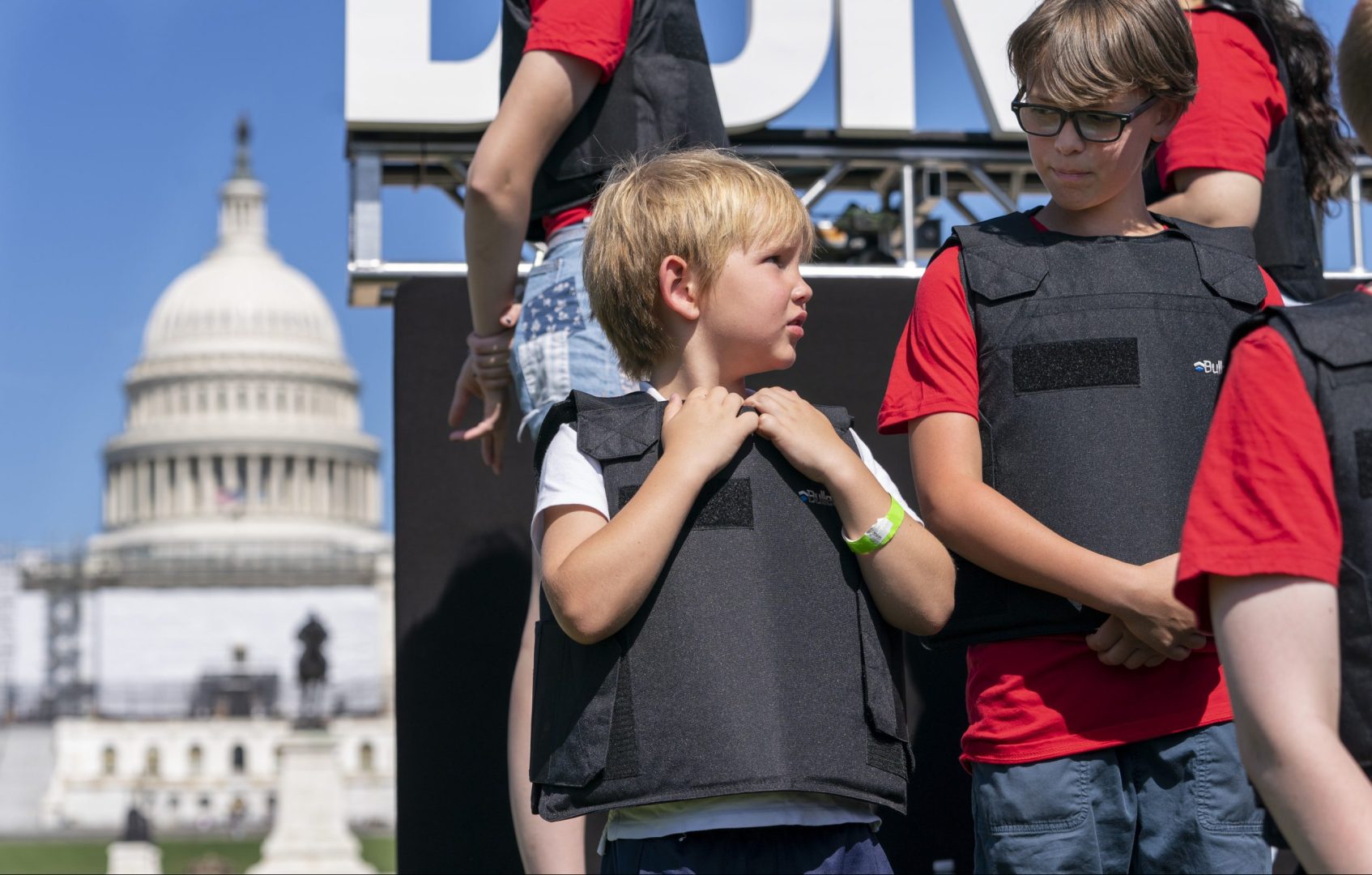 Retailers and manufacturers of body armor are reporting increased sales that are due in part to new customers seeking added protection following the recent spate of mass shootings.

These businesses believe their customers are looking for more protection in a world that has been feeling increasingly unsafe. After the shooting at Robb Elementary School in Uvalde, parents especially have felt like they need to do something, David Reece, the CEO of Armored Republic, said.

Dave Goldberg, the CEO of National Body Armor, said his company experienced a boost in sales immediately following the mass shooting at a grocery store in Buffalo.

“We’ve been increasing ever since,” he said. “We went from having most products in stock, shipping same day, to now taking four to six weeks.”

Customers are buying items such as covert bulletproof T-shirts and backpacks as well as standard bulletproof vests of various strengths.

This broader trend in increased body-armor sales tracks with a rise in gun sales in the past few years. In April 2021, gun sellers across the U.S. reported that first-time gun buyers were pushing a surge in sales.

Retailers have also reported boosts in sales throughout the coronavirus pandemic during summers of civil rights protests, police shootings and other shootings. 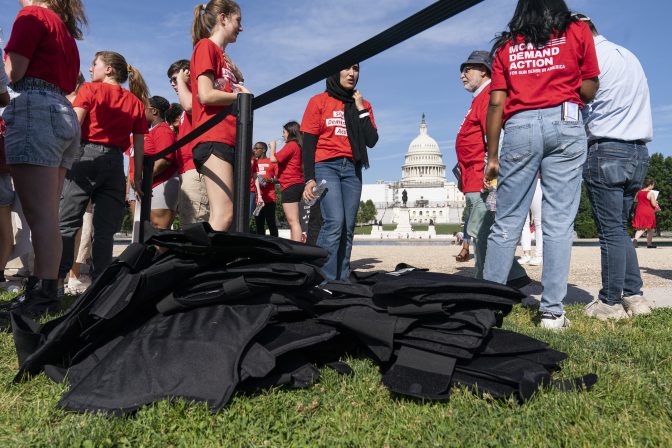 Body armor is piled up after a Students Demand Action event, near the West Front of the U.S. Capitol, Monday, June 6, 2022, in Washington. The group demanded action on gun safety in the wake of the mass shooting at Robb Elementary School in Uvalde, Texas.

Restrictions on who can buy body armor in the U.S. are few and far between. People convicted of a violent felony are banned from purchasing body armor, but regulatory enforcement of that law is lax, according to sellers.

Connecticut requires sales of body armor to be made in person, and New York just passed restrictions on what types of body armor can be sold and who can buy it. Beyond that, no states require any kind of background check or permit. Sellers say they require buyers to be at least 18.

Most of the companies that spoke with NPR for this story just started within the last decade. Many buyers early on were law enforcement officers or journalists, usually working in hostile environments.

Many retailers said gun owners are the most common return customer. They purchase body armor as an accessory to go with their weapon, retailers said. But there is growing popularity among people who just want a body shield to wear in everyday life.

“Most people haven’t worn body armor before, and they just want to be able to wear something and feel comfortable that if they were shot with a handgun, they’re gonna be protected,” Goldberg said of National Body Armor’s customers.

Tactical gear and bulletproof vests have long been worn by members of far-right groups, like the Proud Boys, during protests, noted P.B. Gomez, the founder of the Latino Rifle Association. His group is not affiliated with the National Rifle Association.

“But increasingly, it’s becoming popular among leftist progressive people of color — people who want to protect themselves at protests when they’re in situations where they might be confronted by far-right agitators. They want to have that protection,” Gomez said.

At UARM, the customer base tends to be people working night shifts at gas stations or liquor stores, according to Wolf Milan, the company’s business development manager.

The company, with headquarters in the U.S., also sells armor and tactical gear to troops in Ukraine, where it has manufactured products since before it entered the U.S. market officially in 2018, Milan said.

Goldberg said he has seen “everyone across society” looking to buy his company’s covert bulletproof T-shirts, which can be worn underneath clothing.

“I would say it’s doctors, lawyers, Uber drivers, people that work in restaurants or anywhere there’s a threat,” he said. “We had someone get stabbed at a golf course here in town, and they got one.” 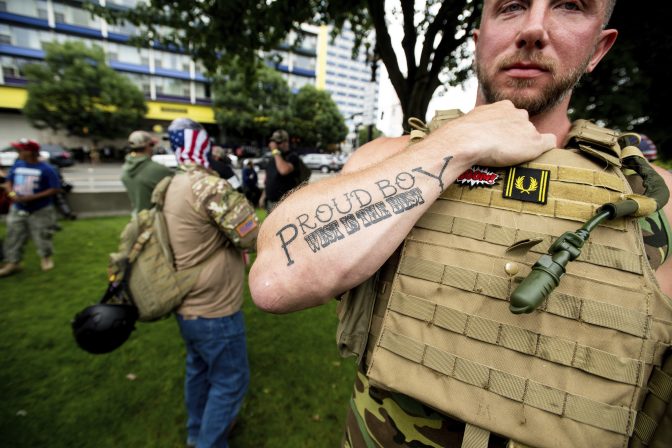 Joseph Oakman, a member of the Proud Boys, wears body armor during an “End Domestic Terrorism” rally in Portland, Ore., on Saturday, Aug. 17, 2019.

Excluding business done in Ukraine during the conflict with Russia, UARM reports that in the last two years, sales have jumped roughly 150% — about two and a half times what they were in 2019.

In the first three months of 2022, roughly half the sales were to traditional customers (that would be veterans, gun enthusiasts or people who work in security or law enforcement). The other half of sales were to completely new buyers. In 2021, the percentage of first-time buyers was less than 30%, Milan said.

Reece, of Armored Republic, reports that from April to May of this year, sales of bulletproof backpacks increased by almost six times — following news of the shootings in Buffalo and Uvalde.

He believes that the sudden short-term burst in activity “will decline very quickly.” 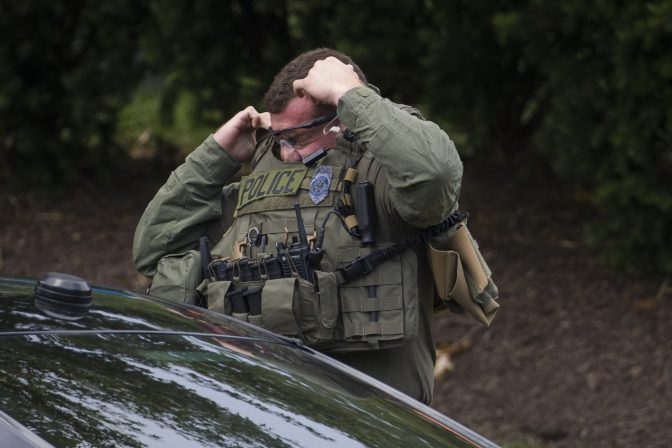 A Fairfax Police tactical officer puts on his body armor near the building that houses Gannett and USA Today, Wednesday, Aug. 7, 2019, in McLean, Va.

New York moves to restrict who can buy body armor

The Violence Project has found that at least 21 mass shooters over the last 40 years have worn body armor, the majority in the last decade. The gunman in the Buffalo mass shooting is just the latest example of that.

During that supermarket attack, the shooter, a white supremacist looking to kill Black people, wore full body armor. The store’s security guard attempted to shoot the attacker but was thwarted by his body armor, which was strong enough to protect against rifle rounds. The guard, Aaron Salter, was killed by the shooter.

Following news that the gunman wore such strong body armor, New York state moved to limit who can purchase this equipment.

Gov. Kathy Hochul signed a package of laws in the wake of the Buffalo shooting that raised the minimum age to buy semiautomatic rifles to 21 and banned the sale of body vests to certain civilians. Only people in approved professions can buy and use this particular kind of protection, according to the law. However, that list of who can buy these vests will come at a later date.

But as The Trace, a news website covering gun violence, reports, the particular kind of armor worn by the gunman in Buffalo (hard armor plates that protect against rifle rounds) isn’t banned under this law. Just soft body armor is, and it’s easier to conceal and protects only against smaller rounds.

“We don’t sell products to the general public that are more superior than what the police have anymore,” Goldberg said. “We’re trying to sell and do the right thing to sell to professionals. And you have people out there who are doing questionable things.”

Other retailers and buyers are not happy with New York’s new law.

Gomez, with the Latino Rifle Association, agreed. He said it’s communities of color and those who are targets of police brutality who are most at risk with a law like this. They are seeking body armor to protect against police shootings or attacks during protests, he said.

Reece says the body armor law is flat-out unconstitutional as well as a “heavy-handed act of a showboating legislature.” Armored Republic intends to sue the state of New York in federal court over this law, he said.

“I believe that evil people are going to do evil things. And it is very easy for people with evil intent to bypass laws or bypass intentions of manufacturers and sellers and to find black market resources,” he said. “I think that preventing access to tools is not a way of helping free people to defend themselves against evil.”

Jan. 6 panel says Trump fleeced his base and 5 other takeaways from the 2nd hearing