Mehmet Oz speaks to supporters at a rally in Bethel Park on June 13, 2022 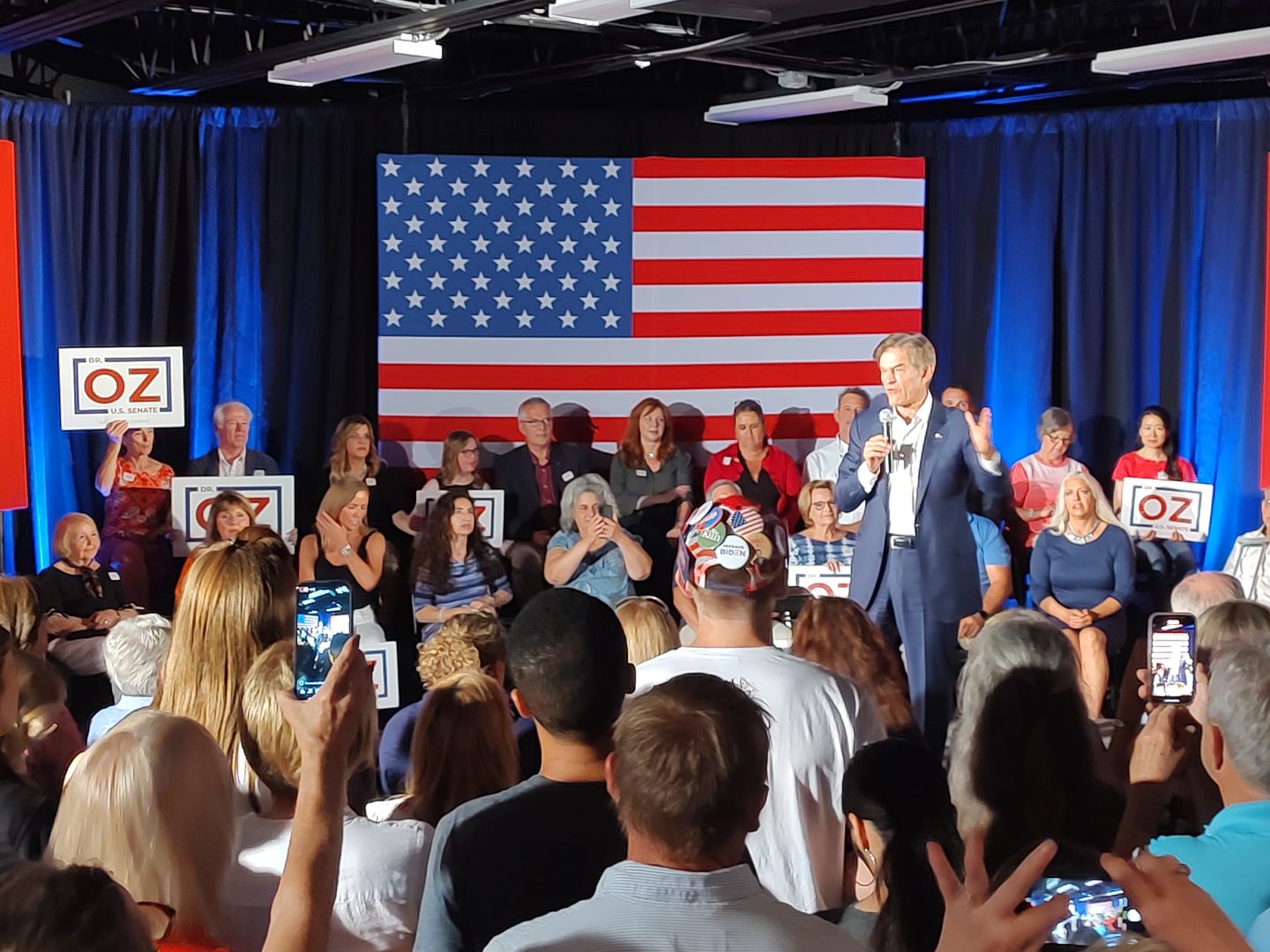 Mehmet Oz speaks to supporters at a rally in Bethel Park on June 13, 2022

It’s been just a couple of weeks since Dr. Mehmet Oz was declared the Republican nominee for Pennsylvania’s US Senate seat. But in a half-hour appearance at a Bethel Park restaurant Monday night, it was clear he was already tacking toward a general election season.

“We will win this election because there are a lot of conservative Democrats, moderate Democrats who do not like what they see in the far-left side of their party,” Oz told a rapt crowd packed into an intimate upstairs bar space. “They’ll come with us. Independents will come with us, and I’m hoping Republicans will as well.”

During a half-hour appearance, Oz made not a single mention of Donald Trump, whose endorsement helped him win the primary. He didn’t discuss guns or abortion either — even though the Senate is currently weighing a modest set of bipartisan gun reforms, and a Supreme Court decision to overturn abortion rights is expected within weeks.

Instead, Oz offered an economics-focused stump speech of familiar Republican talking points. He spoke at length about energy policy, a Republican touchstone in western Pennsylvania, and said it would provide economic gains beyond the state’s borders.

Referring to spiking energy costs, Oz said encouraging more natural gas drilling “would be the single biggest way of reducing inflation, which is stripping our savings away. … And it would give us not just energy independence but energy dominance.”

In general, Oz called for an “all-in approach” to problems like crime, deficits, and failing schools. He was, at times, vague about what policies he was prescribing. While he called for leasing more federal lands for gas drilling — a step the Biden administration announced in April after faltering efforts to halt it — he offered few specifics about his approach to crime, beyond saying the solutions need to be “focused and thoughtful.”

Oz was more pointed in his criticisms of his Democratic rival, lieutenant governor John Fetterman. He accused Fetterman of having a “radical ideology,” correctly noting that Fetterman had previously supported democratic socialist Bernie Sanders for President. He faulted Fetterman for not having worked in the private sector, and suggested Fetterman was opposed to natural gas drilling. (Fetterman’s stance has morphed over the past half-decade to a more friendly position on drilling.)

Oz also noted Fetterman “proclaim[ed] we should release one-third of all inmates, including violent offenders.” Fetterman, who as lieutenant governor sits on a state pardons board, has consistently pushed for the more expansive use of pardon power. But that attack, which has appeared in GOP talking points before, appears to refer to a number of Tweets Fetterman has posted in past years, in which Fetterman was quoting an estimate by former Department of Corrections Secretary John Wetzel that a sizable portion of inmates could be released with no risk of public safety.

Still, Oz said he was “praying for John Fetterman’s quick recovery” from a stroke on the eve of the primary election. Fetterman has been off the campaign trail since, though he has said he expects to return next month.

Such remarks went down well with the Republican faithful in attendance. And it was clear that Oz and party leaders were hoping to bind up the wounds left by a bruising seven-way Republican primary race in which Oz and his top rival, former hedge-fund manager David McCormick, spent millions on ads attacking each other.

“We just came through a very, very competitive and intense primary process,” said Sam De Marco, who chairs the Republican Committee of Allegheny County. “But you know what? We have our slate now, we have our nominee now, and everybody … needs to get behind Dr. Oz, [gubernatorial candidate] Doug Mastriano, and [lieutenant governor candidate] Carrie Lewis DelRosso.”

“If it’s one thing Democrats do well, it’s unity,” DeMarco added, in a statement that might surprise some Democrats. “They can be stabbing each other in the back in the morning, but in the afternoon, they’ll come together to vote for their candidates.”