“In order to change Washington, we have to change the people we send there.” 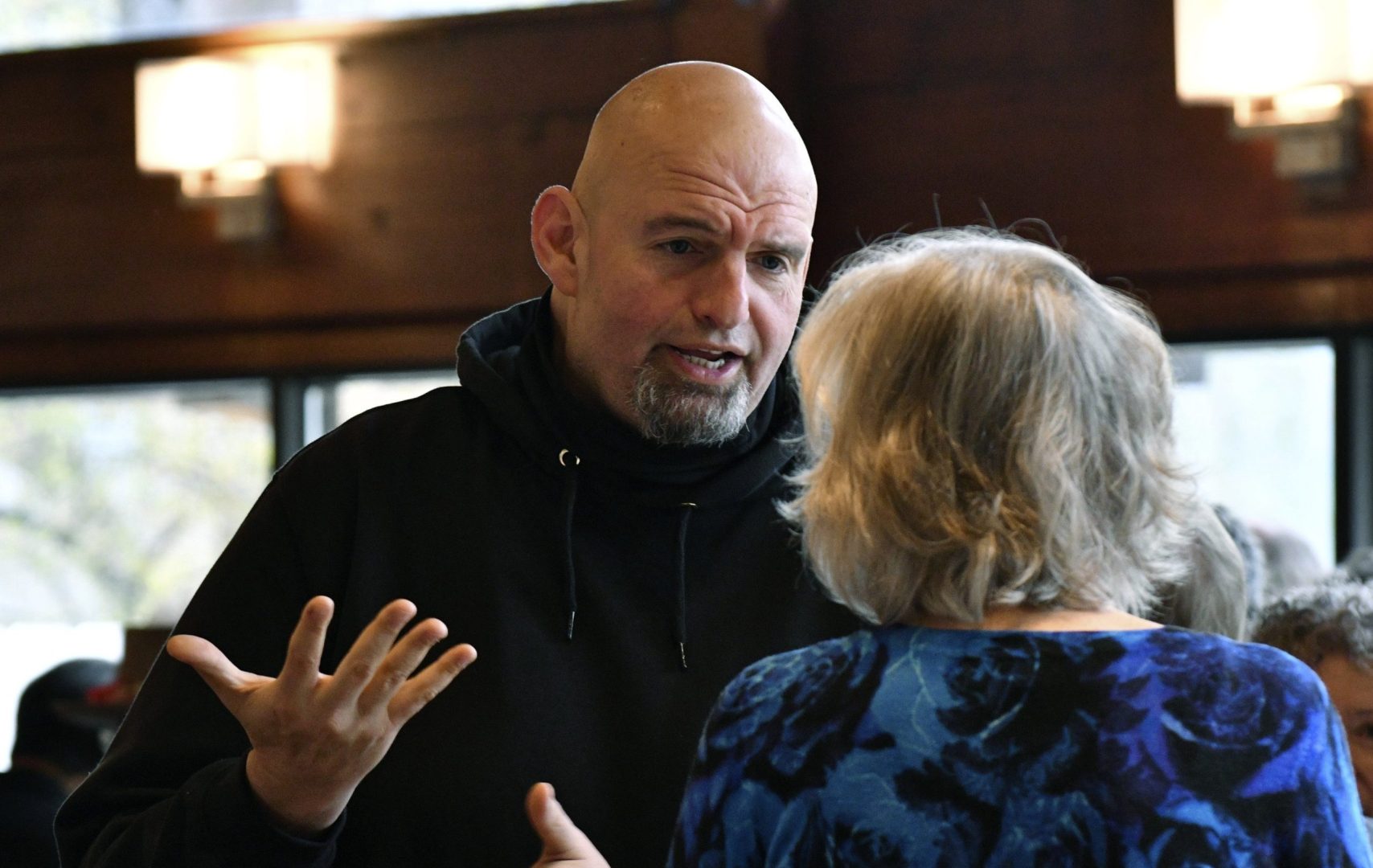 The Nevada Democrat, nearing the end of her first six-year term, ignores the fact that her party controls both chambers of Congress and the White House as she explains the rationale for her candidacy.

“I’m running for reelection because you deserve a senator who will cut through the gridlock and dysfunction in Washington and deliver real results for your family,” Cortez Masto says on her campaign website. “I’ll work with anyone — Democrats, Republicans and independents — to help Nevada’s families succeed.” 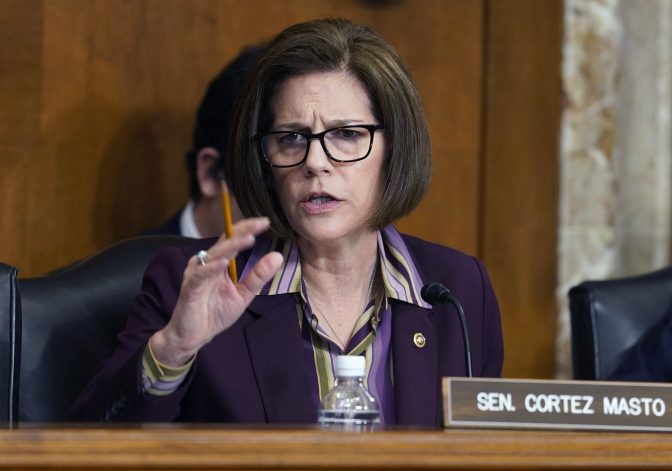 Sen. Catherine Cortez Masto, D-Nev., speaks during a Senate Energy and Natural Resources hearing to examine the President’s proposed budget request for fiscal year 2023 for the Department of Energy, May 5, 2022, in Washington.

Cortez Masto, who will easily win her party’s nomination for another term on Tuesday, is far from alone.

Many of the nation’s most vulnerable Democrats are actively trying to distance themselves from Washington — and their party. Responding to deep frustration from voters who will decide their fate in November, Democratic candidates in swing states like Pennsylvania, Wisconsin, Nevada and New Hampshire are railing against the institutions their party has managed for the last 16 months.

It is a strategy born of necessity given the political climate Democrats are facing in 2022: President Joe Biden remains deeply unpopular and an overwhelming majority of U.S. adults believe the country is moving in the wrong direction. The Democrats who control Congress have failed to deliver on core campaign promises, and perhaps most concerning, the cost of basic goods like groceries and gasoline is soaring under their watch. The nationwide average price for a gallon of gasoline topped $5 for the first time ever over the weekend.

Privately, Democrats concede they’re trying to strike a delicate balance. Some of the gridlock on Capitol Hill is the result of division in their own ranks.

More fundamentally, Republicans are doing everything they can to undermine the Democrats’ plans — on policy and politics. Senate Republicans have blocked Democratic legislation to address concerns about the economy, health care, climate change, gun violence and voting rights at almost every turn. The GOP is also devoting tremendous resources to undercutting the Democrats’ political messaging.

Five months before Election Day, the Senate Republican campaign arm, backed by allied outside groups, has begun to unleash a nationwide advertising campaign attacking Democrats in key states. The barrage of ads is coming months before the GOP typically releases its initial major wave of television advertising. 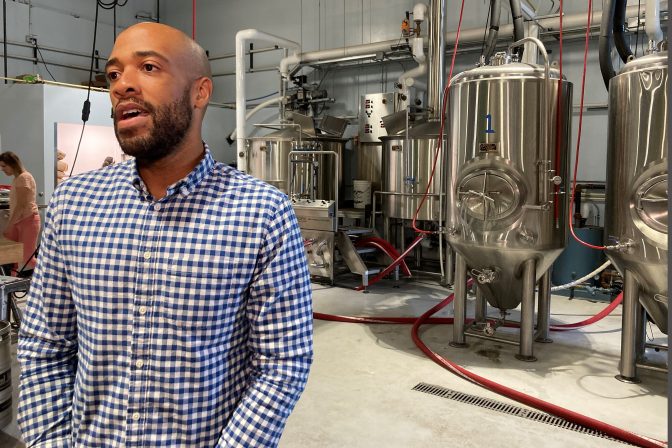 Between the beginning of May through the end of this week, spending reports obtained by The Associated Press reveal that the NRSC and the allied nonprofit One Nation has spent nearly $3.7 million combined on TV ads to weaken Arizona Sen. Mark Kelly; another $3.3 million against Georgia Sen. Raphael Warnock; $1.5 million against Pennsylvania Lt. Gov. John Fetterman, the Democratic Senate nominee; $958,000 against New Hampshire Sen. Maggie Hassan; and $5.6 million to shape the Senate contest Wisconsin, which won’t pick its Democratic nominee until Aug. 9.

The Republican groups have yet to run any attack ads against Cortez Masto, but they have placed television reserves exceeding $4.9 million to run through the end of August.

Wisconsin has emerged as a top target months before Democrats decide which candidate to run against two-term incumbent Republican Sen. Ron Johnson.

In an interview, Lt. Gov. Mandela Barnes, a leading Democrat in the race, described the Democratic-controlled Senate as an “out-of-touch millionaire’s club.” He insisted he was not running against his party, although he had nothing positive to say about Biden when asked to assess the Democratic president’s job performance.

“I’ll be honest, voters are frustrated by a lack of action from people on both sides of the aisle. I agree with them. I’m frustrated, too,” Barnes said. “In order to change Washington, we have to change the people we send there.”

It’s much the same in Pennsylvania, where Fetterman released the opening ads of his general election campaign last week just days after securing his party’s nomination.

“The big guy is running for Senate to take on Washington,” the narrator in one of the new ads says of Fetterman, who is 6 feet and 9 inches tall. Fetterman’s message is even sharper in the other TV spot: “Washington, D.C., attacked towns like this for years,” the narrator says. “We need help. They just talk.” 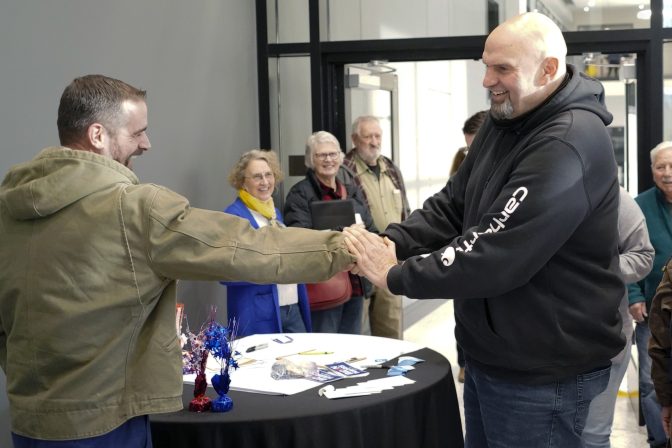 In this photo made on Friday, March 4, 2022, Pennsylvania Lt. Gov. John Fetterman, right, greets Brian Sims, a candidate for Pennsylvania Lt. Governor, as they visit with people attending a Democratic Party event for candidates to meet and collect signatures for ballot petitions for the upcoming Pennsylvania primary election, at the Steamfitters Technology Center in Harmony, Pa. Fetterman is running for the party nomination for the U.S. Senate. The irreverent, blunt, 6 feet 8, tattooed Fetterman faces the Pennsylvania’s Democratic Party committee backed U.S. Rep. Conor Lamb and Malcolm Kenyatta, a second-term state representative from Philadelphia. (AP Photo/Keith Srakocic)

And while it may be somewhat simple for candidates like Fetterman and Barnes, who have never served in Congress, to run against Washington, incumbent Democrats in Arizona, Georgia, Nevada and New Hampshire may have a more difficult task.

In New Hampshire, Hassan is asking voters to send her back to Washington, where she has served for almost six years. She’s expected to face a challenging general election, even as Republicans struggle to rally behind a top-tier challenger.

In recent weeks, Hassan has condemned the Biden administration’s withdrawal from Afghanistan and its policies on the U.S.-Mexico border. And in one of her campaign’s first TV ads, Hassan said she was challenging fellow Democrats in Congress to do more to lower the price of gas.

“I’m taking on members of my own party to push a gas tax holiday and I’m pushing Joe Biden to release more of our oil reserves,” Hassan said in one ad titled “Relief.”

Democratic strategists suggest that most of the party’s leading candidates have personal brands years in the making that would allow them to overcome concerns about their party’s leadership in Washington. Indeed, Cortez Masto is a former Nevada attorney general and Hassan is a former New Hampshire governor.

To separate themselves from their national party brand, Democrats in key states hope to keep the focus on hyper local issues instead of making the November election a referendum on the party that controls Washington. History suggests it will be a difficult task.

Cortez Masto is focused on what she’s accomplished for the people of Nevada instead of Washington dysfunction, said campaign spokesperson Josh Marcus-Blank.

“Sen. Cortez Masto took on the chaos of the pandemic in Nevada, delivering the federal support needed to bring the 30% unemployment rate down to pre-pandemic levels, and now she’s leading the fight to take on the Big Oil companies squeezing Nevadans,” he said. “Her opponent is basing his entire campaign on Trump’s Big Lie and has made millions at a firm representing those same companies, which is a contrast we welcome.”