Delta-8 is being marketed in the mid-Atlantic area, including in stores like this one in downtown Baltimore on May 12, 2022.

Despite its legal status, delta-8 is not subject to any regulations or mandatory testing in Pennsylvania, and its packaging isn’t required to note potential side effects. 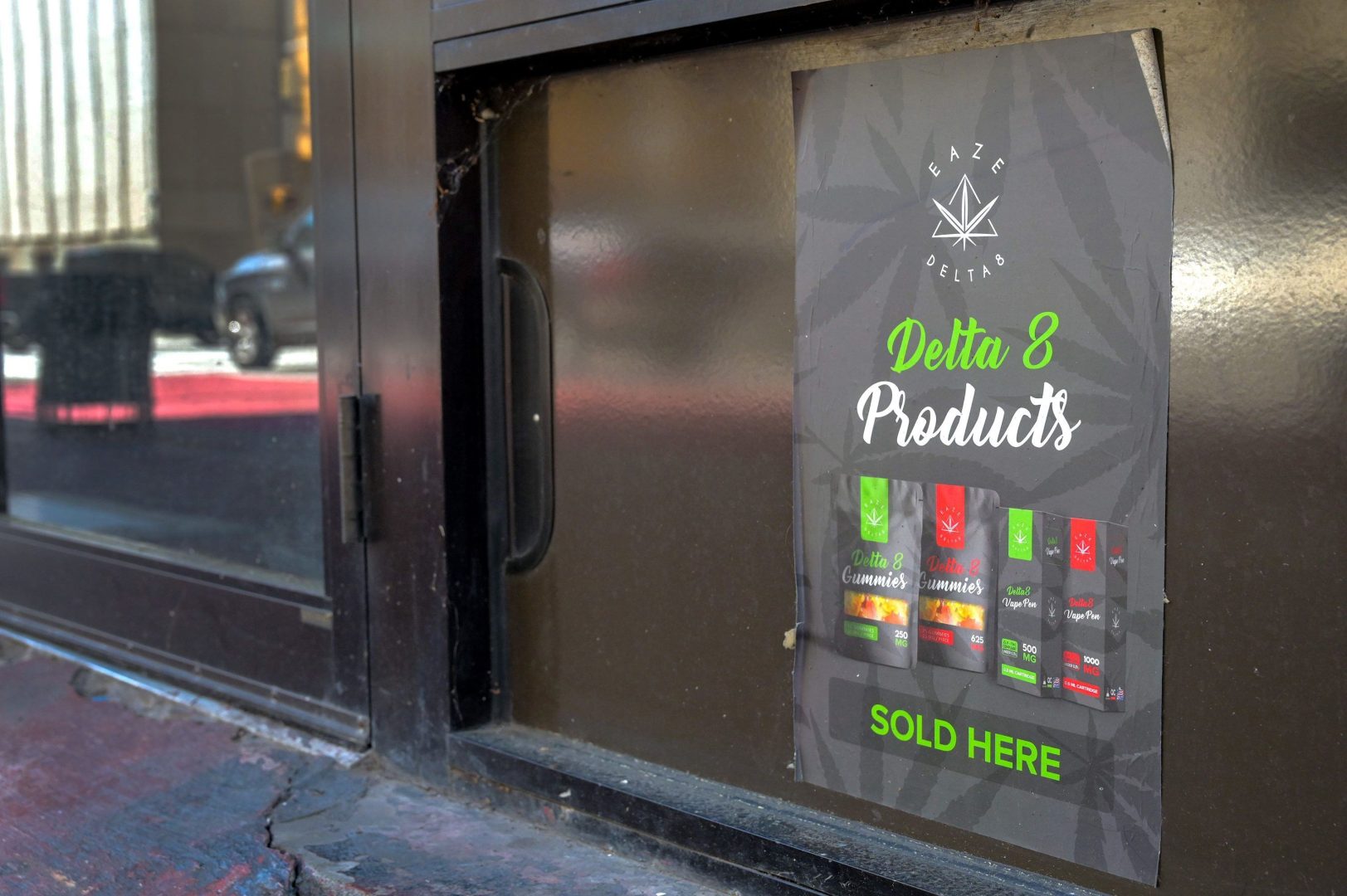 Delta-8 is being marketed in the mid-Atlantic area, including in stores like this one in downtown Baltimore on May 12, 2022.

Clarification: A previous version of this story stated unequivocally that the hemp derivative delta-8 is legal, when its status is in fact in dispute. The story has been updated to include more detail and comments from the Pennsylvania District Attorneys Association.

Pennsylvania lawmakers and advocates for legal cannabis say uneven access to marijuana has pushed consumers toward a widely available — but unregulated — psychoactive product whose exact contents are often impossible to discern.

A state senator is now pushing to implement regulations that would keep it available while ensuring it is safe to consume.

Delta-8 tetrahydrocannabinol (THC) — known as delta-8 — is a cannabinoid derived from hemp. Its properties resemble those of delta-9, the main cannabinoid in marijuana that produces the high. But users say delta-8 creates milder effects.

In 2018, Congress unintentionally sanctioned the sale of delta-8 when it passed a federal farm bill legalizing hemp production. Since then, it has become widely available in edibles, vape pens, oils, and food products sold at head shops, gas stations, and online.

In Pennsylvania, some consumers have turned to it for its reported milder side effects, and because of the state’s complex cannabis landscape: Accessing medical marijuana can be time-consuming and costly, and recreational cannabis remains illegal.

But despite its hazy legal status and easy availability, delta-8 is not subject to any regulations or mandatory testing, and its packaging isn’t required to specify serving size or potential side effects.

The Food and Drug Administration warns consuming delta-8 could result in “serious health risks.” National poison control centers received 2,362 calls related to delta-8 between January 2021 and March 2022, according to the agency, and 40% percent of those calls involved “unintentional exposure.” Of those exposures, 82% involved “pediatric patients.”

The potential for children to consume delta-8 is one of the reasons why state Sen. Judy Schwank (D., Berks) plans to introduce legislation that would regulate the product. Schwank said she was contacted by a parent whose middle schooler bought a vape with delta-8 in it.

“My concern initially came from the fact that there may be youth that are using this product as an alternative to recreational marijuana to get high,” Schwank said, “and may inadvertently be poisoning themselves with other products that are inside.” 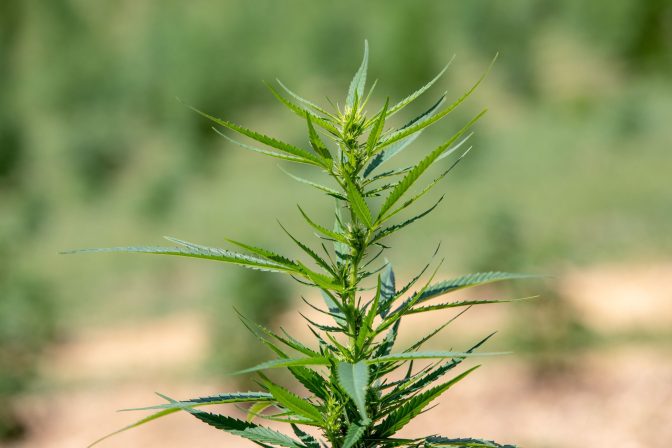 Delta-8 tetrahydrocannabinol (THC) — known as delta-8 — is a cannabinoid derived from hemp.

‘There’s not a set recipe’

When it first appeared on shelves, delta-8 seemed like a godsend to people who didn’t want to buy cannabis illegally or who couldn’t access Pennsylvania’s medical marijuana program. Advocates acknowledge access to the program is limited due to cost, red tape, and meager public knowledge.

Jonathan John, a Pennsylvania-based chemist who manufactures and sells delta-8 products through his company Circus Cannabis, said delta-8′s milder effects are popular among people who are new to marijuana. People who have used products containing delta-9 before and felt it was too strong, also favor delta-8′s lower potency.

“Some people that are older tend to like that,” John said.

Pennsylvania requires that medical marijuana be tested for lead, mercury, butane, ethanol, E. coli, and dozens of other chemicals and pesticides. No such requirement exists for delta-8.

That’s led to concerns about toxicity and possible contaminants in the products.

Chemists who produce medical marijuana or recreational marijuana in states where it’s been legalized test their products to make sure reactions went according to plan and extract any remaining solvents.

“Certainly it’s cheaper to not have an added step in your process. This would require extra equipment and time,” Vrabel said. “We don’t know if companies are doing this or not.”

When ProVerde Laboratories tested 16 delta-8 products on behalf of the US Cannabis Council — a trade group that lobbies on behalf of cannabis companies — four contained lead and seven had potentially dangerous amounts of nickel, copper, and chromium.

“I am a big advocate of delta-8 as a potential therapeutic and recreational product,” Hudalla said. “I am just not an advocate for using consumers as guinea pigs for novel chemical compounds that have not yet been tested.”

He said containments can be removed to create a safe product, but “it takes an extra step, extra time, and costs a bit more to produce.”

John argued that the concerns about solvents contaminating delta-8 products are overblown. If a chemist manufactures delta-8 edibles correctly, John argued, they have to remove almost all of the solvent, or the distillation process won’t work.

Berks County District Attorney John Adams recently bought a random assortment of vapes and gummies containing delta-8 and delta-10 — another form of THC that can be derived from hemp — and sent them to Pennsylvania State Police for testing. The lab found that every product tested contained illegal levels of delta-9.

Adams’ finding is not an outlier. Studies have found that delta-8 products often contain more delta-9 than is legal and sometimes contain less delta-8 than the packaging claims.

John said that the process for manufacturing delta-8 always produces delta-9, but the lack of standardization in manufacturing techniques can make it difficult for chemists to remove the delta-9.

“This is a new thing. And a lot of these people that are creating delta-8, there’s not a set recipe for them to do it,” John said. “They’re experimenting.”

There’s also another wrinkle of uncertainty. John noted that testing delta-8 products for delta-9 levels isn’t straightforward and that it can be difficult to know which labs are reliable.

“Some labs will say that it doesn’t have delta-9 in it, and some labs will say it does, and it’s the same sample,” John said. “Because we don’t have to send it to a specific lab in Pennsylvania, you can kind of shop around.”

Delta-8′s legal status is murky and confusing at best, with varying opinions on whether federal law allows the legal sale and use of delta-8.

Under Pennsylvania law, delta-8 — whether produced synthetically or extracted from hemp — is a Schedule 1 controlled substance under the Controlled Substance, Drug, Device, and Cosmetic Act.

Brook Duer, a staff attorney at the Penn State Center for Agricultural and Shale Law, said cannabis sativa L that meets the definition of “industrial hemp” under the state’s Hemp Research Act “is legal to grow and possess in Pennsylvania.”

But once the delta-8 THC is extracted from the plant, “that chemical compound is no longer within the definition of ‘industrial hemp.’”

“Frankly, when all of this was put into place, I am not aware that anyone anticipated that other THC types might become sought after, extracted, and highly concentrated for human consumption,” Duer, who was previously chief counsel for the Pennsylvania Department of Agriculture, said via email.

“Those who violate the law are subject to prosecution under state statute,” the statement continued.

The association said it “is not aware of any arrests related to this emerging issue,” but that “we know that some counties are working to remove delta-8 products from the shelves.”

Becky Marcinko, a recent Penn State graduate, said she and many of her friends buy delta-8 products from a delivery service in State College.

“I’ve had nothing but positive experiences,” Marcinko said.

She said she was unaware of potential issues with contamination and doesn’t think most of her friends are either.

John and Vrabel said this lack of knowledge is common.

“It’s a trust thing, right? Typically, when you walk into a store and purchase a product, you don’t think of all these things,” John said. “You’re assuming because the store is putting it on their shelves, that they’ve done their due diligence and that it’s a safe product for you to purchase.”

Steve O’Neill, a retired federal law enforcement officer who lives in Edinboro, had a medical marijuana card for a year. But once he tried delta-8, he decided not to renew it.

“They make you jump through so many hoops to get the card in the first place,” O’Neill said. “I tried delta-8. … It did what I needed.”

O’Neill buys his delta-8 products online for less than what his medical marijuana card cost.

In Pennsylvania, a medical marijuana card costs $50 annually, and the required yearly appointment with a doctor can range from around $100 to $300.

Marcinko said she also looked into getting a medical marijuana card but abandoned the idea, also because of cost.

“I wasn’t sure if I would have qualified for it,” Marcinko said, referencing the state’s qualifying conditions which include anxiety and cancer. “It was kind of expensive to have a consultation.”

Schwank said a number of her constituents reached out to her to say that they used delta-8 because medical marijuana cards aren’t accessible.

That information persuaded Schwank to propose regulating delta-8 rather than banning it as she originally planned to do. She wants the packaging to be more clear about what delta-8 is, its effects, and what a serving size is. She also wants to mandate tests to ensure that the products don’t contain delta-9 or any contaminants.

“It needs to be tested by the state or by a third-party laboratory, and then, again, listed on the label of the product,” Schwank said.

John said that delta-8 manufacturers should be subject to the same regulations as manufacturers in Pennsylvania’s medical marijuana program. He would also like to see distribution licenses for stores that sell delta-8, noting that hemp farmers need a license to sell hemp.

If it were regulated, delta-8 could benefit potential medical marijuana patients, Vrabel said.

“I think that if it were regulated, it would be an awesome stepping stone,” Vrabel said, especially for patients who are “nervous” about how they would react to medical marijuana.

For now, consumers should research which brands have a good reputation and see what information they publicize. Companies sometimes publish test results for their products on their websites. Although these aren’t always reliable, John said a reputable brand will include them.

“Go to that brand’s website. Follow that brand on Instagram or social media, and make sure that that brand is being transparent,” John said. “They should be updating you on test results, they should have a known address, some way to reach out to them, a customer contact.”

“After everything that we just discussed,” Vrabel said, “I would almost go to your buddy in high school instead.”

Christina Baker is an intern with the Pennsylvania Legislative Correspondents’ Association. Learn more about the program.