Alvernia University looks to expand in Reading, in part with public funds 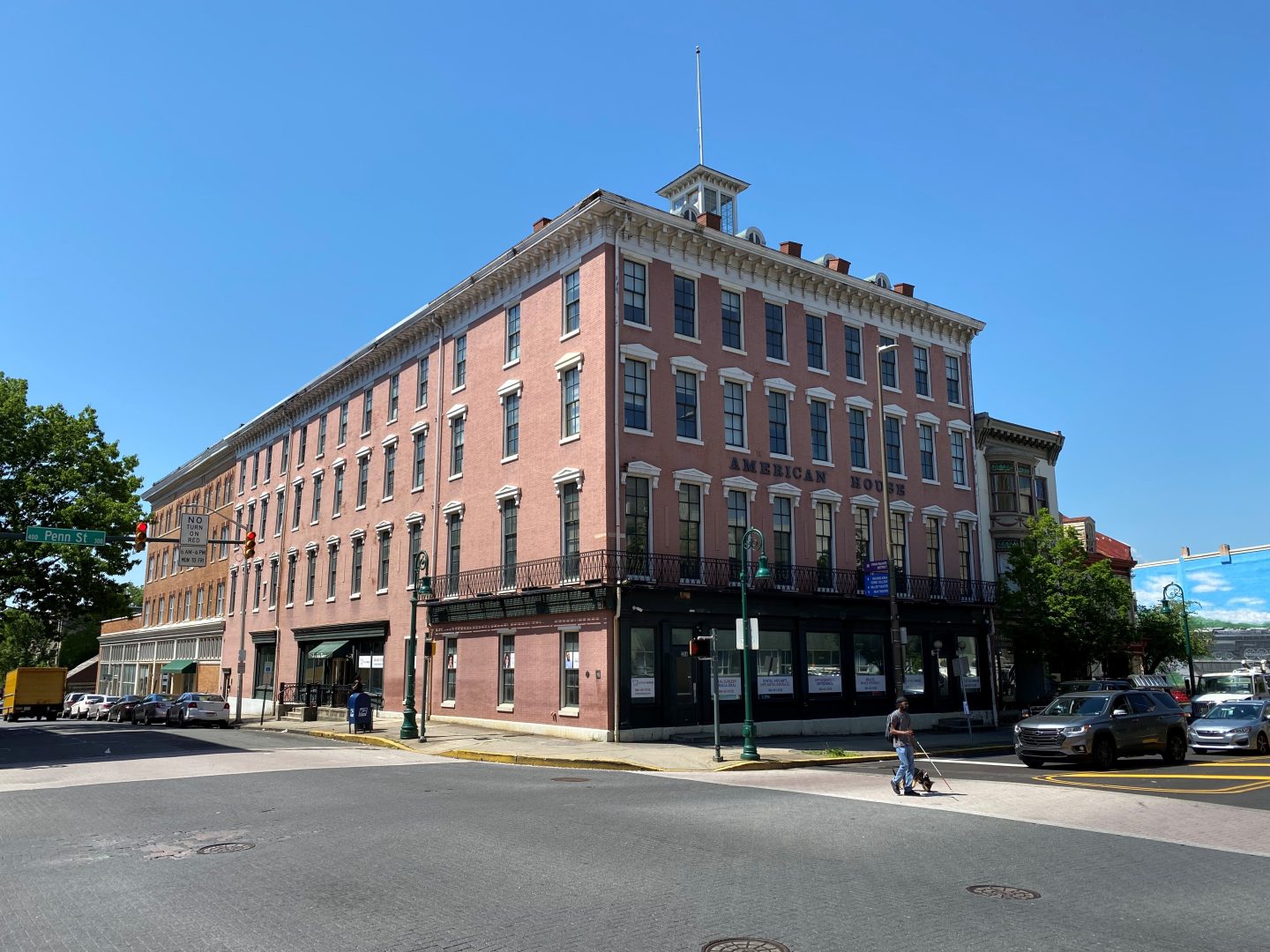 (Reading) – The private university with a vision to transform a portion of Reading into a “CollegeTowne” is eyeing another piece of prime real estate in the center of downtown.

Alvernia University wants to buy a four-story historic former hotel. The building would be used for student housing, medical professions training and to be a site of a health clinic, according to the school’s proposal.

Alvernia, with an enrollment of a little more than 2,000 students, has already created a big splash with its renovation of the former I-Lead charter school building at 401 Penn Street. It is now looking caddy corner, to the American House at 354 Penn Street. 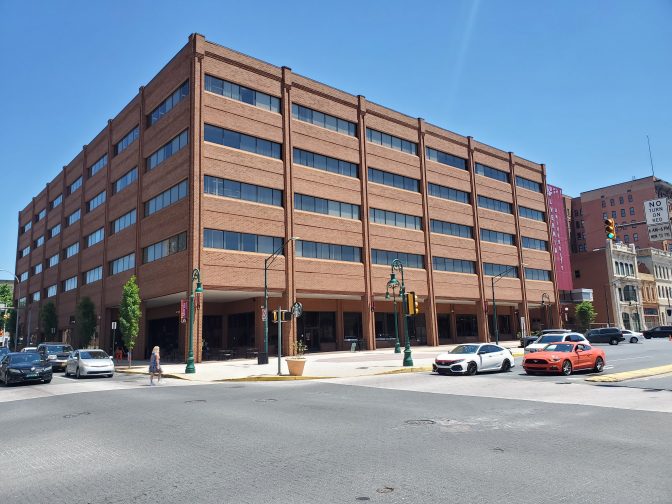 The private university is asking for around $5 million in city and county funds for “Phase 2” of the CollegeTowne plan, which is estimated to cost the school $20 million in total, according to its proposal to the city and the county’s grant officer.

Alvernia spokesperson Kristopher Nolt said the school is requesting funding for expansion in Reading and while it is looking at the American House as a possible location, the school has not yet bought the building.

A paper trail of proposals, letters of support and emails give insight into how the school could further transform downtown with its expansion.

In black and white

Alvernia University is asking for a public investment to help it buy the 45,000-square foot building at 354 Penn Street.

The plan is detailed in a proposal submitted earlier this year to the city of Reading.

That money would help the college create a health sciences facility for nursing students and a community health clinic in the American House building, according to the proposal.

Communications from an Alvernia trustee to city officials indicates the school is hoping to use money from the city’s American Rescue Pan Act money. How much the city puts into the project, if any, could be revealed in upcoming committee discussions about how to use that money.

A Right-to-Know request submitted Thursday by WITF to the city for all applications for APRA funds has not yet been fulfilled by the city.

The university is looking to get another $1 million from the city to support a business incubator. It may also help fund event planning, arts projects and marketing that could benefit the city, according to the proposal.

The proposal does not detail how the school will fund the projects if the city declines its request.

The school is also looking for $2 million in aid from Berks’ American Rescue Plan Act coffers to support educational programs, according to a county official.

Records at the Berks County Recorder of Deeds and Tax Assessment offices do not indicate the building has been sold. Attempts to reach the owners of the building, Arc Realty LLC, were unsuccessful.

Arc Realty bought the property for $1.2 million in late 2020, according to the deed records. Alvernia’s proposal states that it is “in the process of acquiring the facility for $1.45 million.”

The plan says the building will be renovated for retail space and student housing.

The case for pubic investment

A pitch for the city to invest in the project is detailed in an email written to elected city leaders last month by Alvernia trustee Barry Schlouch.

“This is truly a win-win-win opportunity,” Schlouch wrote.

In the email, Schlouch referred to benefits listed in the proposal. They included students spending an estimated $5 million annually in the local economy, increased property values and more revenue from taxes and parking.

In response to a request for comment, Morán and his administration did not go into detail about possibly helping the school fund the project, saying they want the review process, which starts next week, to proceed without interference.

The administration did express optimism about Alvernia’s plans to expand.

“The Morán administration welcomes new developments with great enthusiasm and is eager to learn about CollegeTowne’s expansion plans,” city spokesperson Christian Crespo said in a written statement. “It’s evident that Reading Downtown is experiencing significant momentum, and many organizations want to contribute to its success.”

Applications for the county are still in review, and the county will award funds in the next two weeks, Mayo said.

Leadership from companies such as Penske, Weidenhammer and Liberty Environmental wrote letters of support for the expansion of engineering school space in Reading to empower the local workforce.

Alvernia has been in contact with the Preservation Alliance for Greater Philadelphia about the building.

Jennifer Robinson, director of preservation services for the alliance, said she met with the university’s director of facilities earlier this year to discuss an easement on the building’s facade.
A predecessor to the alliance, the Philadelphia Historic Preservation Corp., donated a facade easement to the American House in 1985.

A façade easement protects the building’s exterior from alterations that don’t align with preservation guidelines, from demolition, and imposes a maintenance standard on the owner. It basically acts as long-term protection for the original appearance of the building.

With a façade easement, the building owner at the time of the donation agrees to restrictions on alterations, demolition and maintenance in perpetuity.

Several businesses occupy space in the building, and some tenants say they have heard about the potential change in ownership and use.

Brad Waples is the owner of Custom It Printing, an art and clothing boutique that has been on the the South Fourth Street side of the building for the past eight years. Waples is a member of Alvernia’s Cultural Coalition, an initiative of the university’s O’Pake Cultural Center for Economic Development and Entrepreneurship.

“I’m actually super excited about Alvernia taking over this space, especially with what they’ve done with their building across the street,” Waples said. “Just being here for so long, and understanding what this building needs as far as improvements and proper management.”

Waples said that whenever potential development arises in Reading, so does the conversation about longtime businesses and residents getting pushed out.

He did note that property values will likely go up once there are more students living in that area. But he said that Reading real estate is so cheap that redevelopment could make the area attractive while not also being unaffordable.

Waples said he sees the potential development as a net positive for the city.

“With the push to have more people live downtown to support the college, I think that’s also going to lead to more amenities downtown,” Waples said. “So in the vein of seeing a better downtown, a more vibrant downtown and more active downtown, a more economically viable downtown, I think all of those things will be a positive that’s brought on by Alvernia.”

Anthony Orozco are a part of the “Report for America” program — a national service effort that places journalists in newsrooms across the country to report on under-covered topics and communities.