Election officials don’t expect the results to change much. 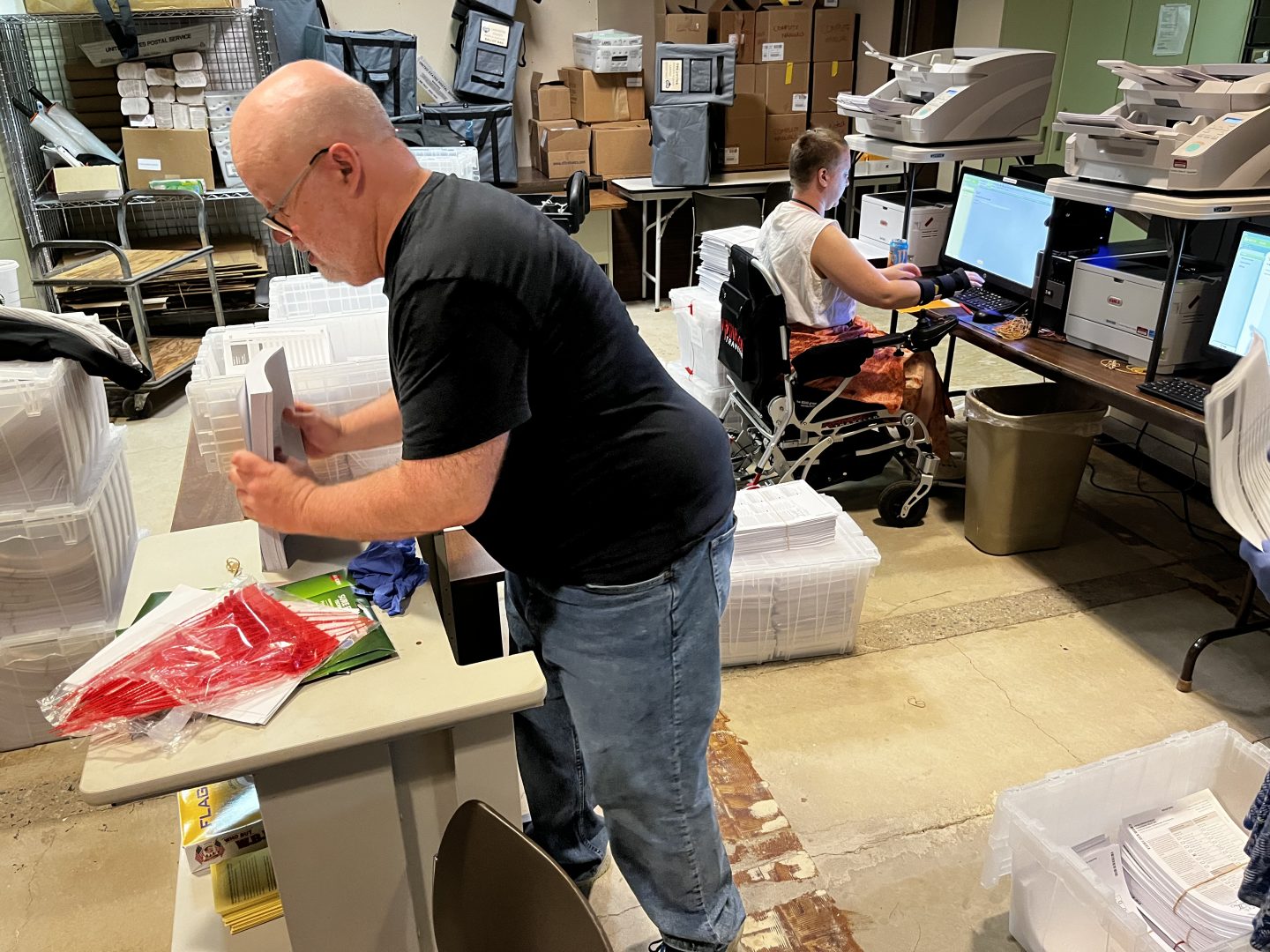 When Lancaster County poll workers began counting mail-in ballots during the May 17 primary, they found thousands of them were printed with an incorrect identification code.

So, they were unable to be scanned.

Over the next two days, poll workers tirelessly re-marked the votes on functional ballots and ran them through the machines again.

County Commissioner Ray D’Agostino said they swiftly resolved the issue by breaking into teams of three.

Chief Clerk of Elections Christa Miller said her team is better prepared for the recount.

“We all kind of saw the writing on the wall from this, starting the day after the election. This time I feel like we all saw what was coming. You were able to prepare weeks in advance,” she said. “We’re hoping we can get through about 1,000 [ballots] per hour on each scanner. It’s a pretty conservative number. I think we’ll be able to do well more than that.”

Oz leads McCormick by 402 votes in Lancaster County, but trails Kathy Barnette by 2,395 votes in one of the seven counties she currently leads. She finished third in the statewide vote.

Urged by former President Trump, who did it himself during the 2020 Election, Oz has declared himself the presumptive winner of the contest. State election leaders say the race remains too close to call. 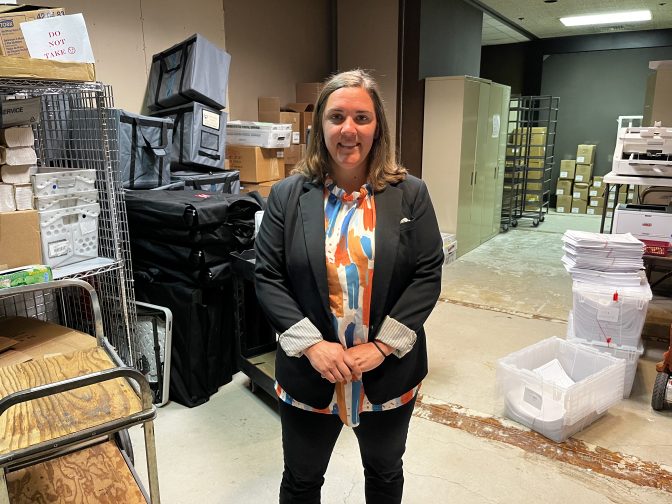 How does a recount work?

Counties determine their own recount methods, but state election law dictates how voter data is recorded and transmitted.

State law requires ballots to be rescanned on different machines from the ones that originally scanned them. Those with “overvotes, undervotes or marginal marks” must be recounted by hand.

Lancaster County is using three machines they already own for rescanning in-person ballots and one new machine for mail-ins.

Franklin and Lebanon counties plan to start their recount Wednesday. Dauphin County will conduct “logic and accuracy testing” of their vote recount system, ahead of their recount starting on Thursday.

Jonathan Marks, Deputy Secretary for Elections and Commissions with the Department of State, said the results are not affected by counties’ state-approved recount protocols.

Results from all counties must be submitted to the Secretary of the Commonwealth by 8 p.m. on Wednesday, June 8.

Christa Miller said representatives from both McCormick and Oz’s campaigns will be able to watch the recount process in Lancaster County.

“Each candidate is able to have two watchers as well as a lawyer present, so they can have up to three people present at the time,” Miller said. “So, we will just basically keep a list of who’s there at one time.”

“I’m very thankful for the hard work all the election workers across the Commonwealth are putting in to go through this process,” Todd Bartos said. But, he did not indicate whether he believes the recount will change the outcome of the election.

“You’d have to talk to the [Oz] campaign about that,” he said. 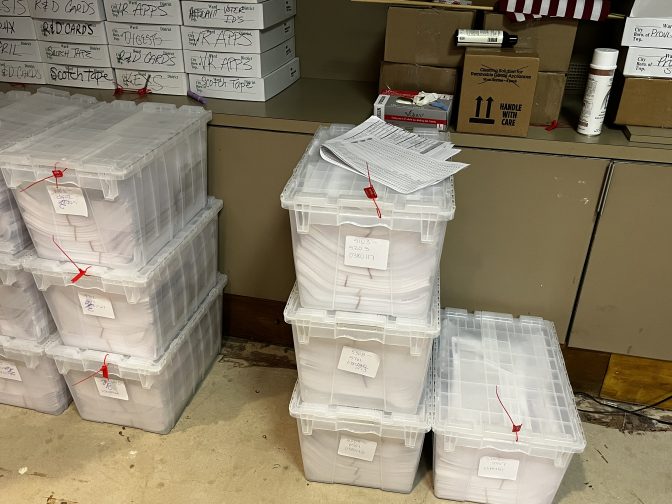 Lancaster County ballots set aside to be recounted. (Robby Brod)

With just hundreds of votes separating Oz and McCormick, their legal teams have turned their attention to the commonwealth’s hundreds of undated mail-in ballots.

Trailing in the race, and outperforming his opponent with mail-in votes, McCormick wants them to count, while Oz does not.

Seeking to let the undated ballots count, McCormick’s representation claimed in a lawsuit they were “indisputably submitted on time… and no fraud or irregularity has been alleged.”

The Pennsylvania Republican Party and the Republican National Committee have joined Oz in working to block the effort.

State election law requires the outside mailing envelope be signed and dated in order for a ballot to count. Federal law says the signature/dating doesn’t matter as long as the ballot is received on time from a qualified voter.

McCormick is now requesting that precincts in 12 counties recount their ballots by hand, citing what he calls, “inconsistencies between data shared by the counties and by Pennsylvania’s Department of State.” He calls for a hand recount in some precincts in Allegheny, Bucks, Centre, Chester, Cumberland, Delaware, Erie, Lancaster, Monroe, Schuylkill, Westmoreland, and York counties.

There is no evidence any state or county officials reported incorrect data during the primaries, or that a hand recount is more accurate than that of a machine.

Last week, the Department of State estimated there are roughly 1,200 Republican mail-in ballots left to be adjudicated, including about 860 mail-in ballots missing a signature. 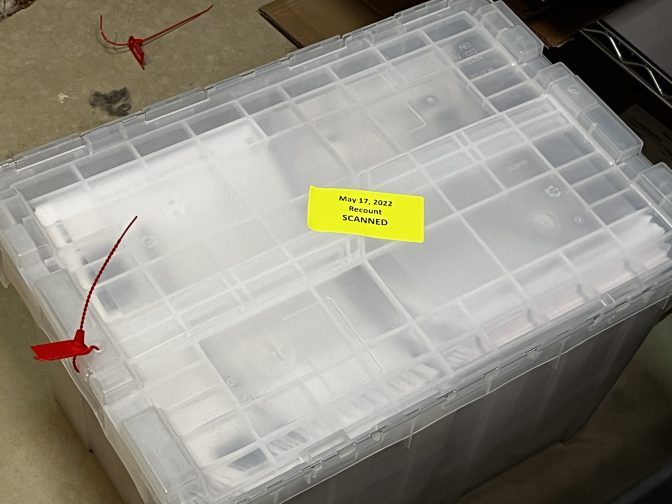 A box of ballots in Lancaster County that will be run through different machines from the ones that scanned them during the May 17 primary. (Robby Brod)

Recount will not likely change much

Few races in state history have ever been this close, and just six since 2004 have gone to a recount. But vote-counting machines have modernized in recent years to become quicker and more secure than ever, with minimal risk of human error in the tabulations.

The Department of State’s Jonathan Marks said slim margins like this are rare, but he’s confident that running ballot machines again will not alter the count.

“The last time we had an election that close was in 2003 with a Superior Court race, where that was decided by several hundred votes. And that actually predates our statewide recount law,” he said. “Usually the margin doesn’t change a whole lot. The votes will generally go up a little bit for each candidate.”

“It is really hard to compare this to other historical precedents, because the procedures and the technology are much more uniform than they have ever been,” she said. “I’d be stunned if you had more than, like, single digits of votes changed because of that.”

She said more people should understand how secure the voting process is, and a recount won’t uncover any significant wrongdoings.

“That’s the part people are not paying attention to. You come in. You sign your name, and there’s somebody in the middle [where I vote] who gives you a voter number. They can’t match it to your vote in any way,” she said. “Then, the person who signed you in has to initial that and put the number in the book. So, three different people have to verify that it was actually you and that we counted you and we handed you one ballot.”

Miller said if any votes are going to change the results, they will happen in court.

“Adjudication more comes into play on those ballots,” she said. “It will on these, just because [voters] didn’t have the chance to immediately change them at the polls.”