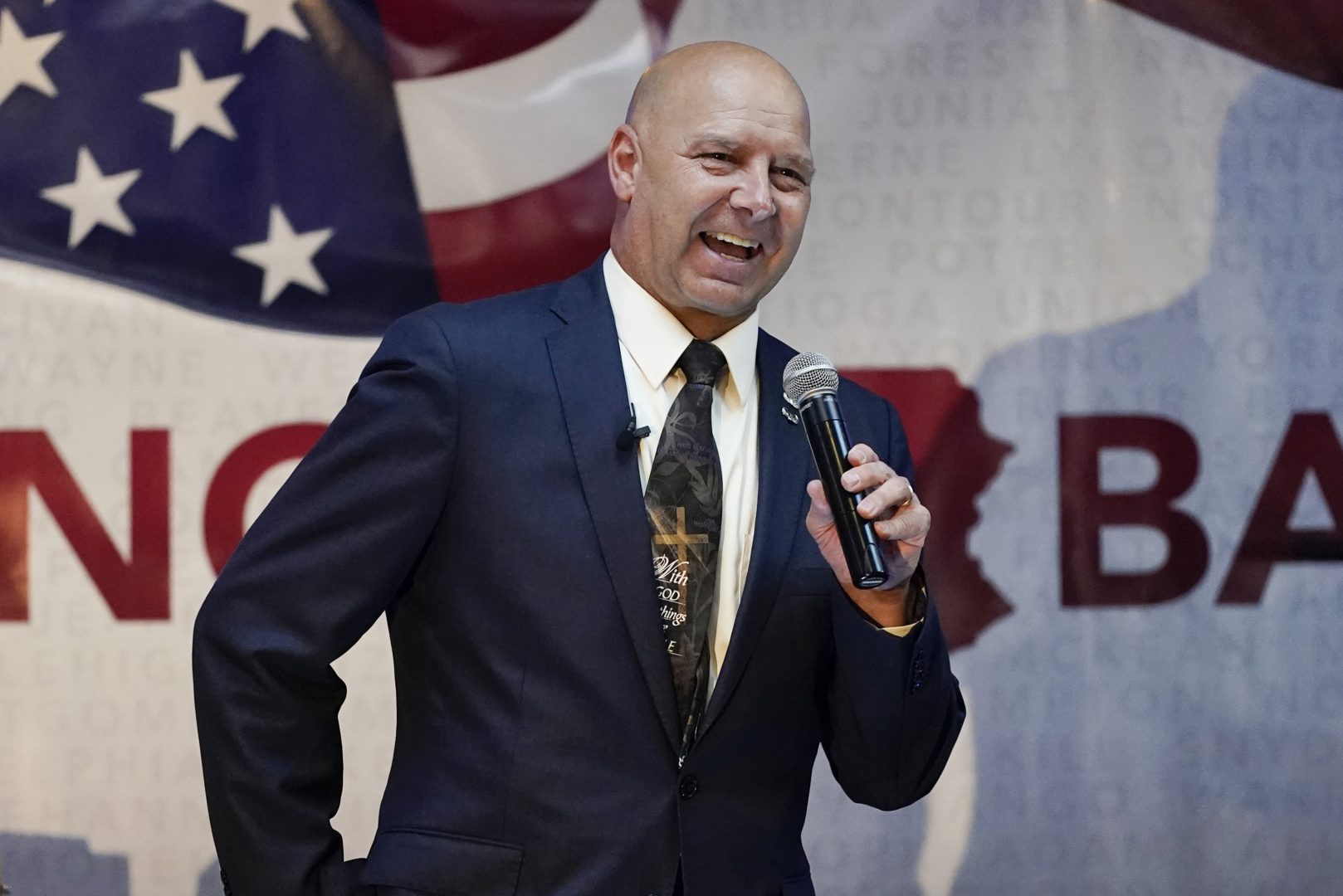 (Pittsburgh) — The victory party took on the feel of an evangelical worship service after Doug Mastriano won Pennsylvania’s Republican gubernatorial primary this month. As a Christian singer led the crowd in song, some raised their arms toward the heavens in praise.

Mastriano opened his remarks by evoking Scripture: “God uses the foolish to confound the wise.” He claimed Pennsylvanians’ freedom would be “snatched away” if his Democratic opponent wins in November, and cast the election in starkly religious terms with another biblical reference: “Let’s choose this day to serve the Lord.”

Mastriano, a state senator and retired Army colonel, has not only made faith central to his personal story but has woven conservative Christian beliefs and symbols into the campaign — becoming the most prominent example this election cycle of what some observers call a surge of Christian nationalism among Republican candidates.

Mastriano — who has ignored repeated requests for comment from The Associated Press, including through his campaign last week — has rejected the “Christian nationalist” label in the past. In fact, few if any prominent candidates use the label. Some say it’s a pejorative and insist everyone has a right to draw on their faith and values to try to influence public policy.

But scholars generally define Christian nationalism as going beyond policy debates and championing a fusion of American and Christian values, symbols and identity.

Christian nationalism, they say, is often accompanied by a belief that God has destined America, like the biblical Israel, for a special role in history, and that it will receive divine blessing or judgment depending on its obedience. 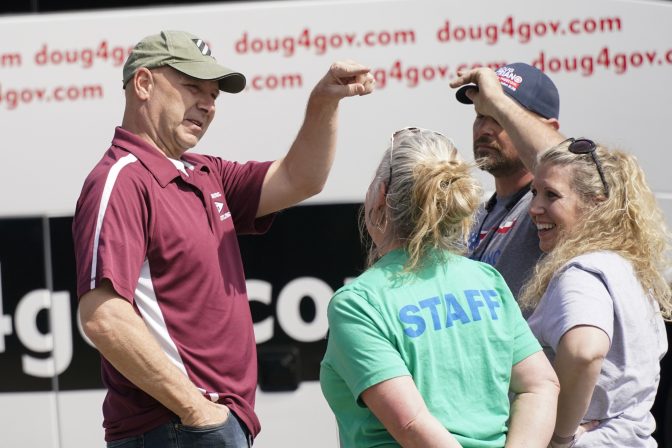 That often overlaps with the conservative Christian political agenda, including opposition to abortion, same-sex marriage and transgender rights. Researchers say Christian nationalism is often also associated with mistrust of immigrants and Muslims. Many Christian nationalists see former President Donald Trump as a champion despite his crude sexual boasts and lack of public piety.

Candidates seen as Christian nationalists have had mixed success in this year’s Republican primaries, which typically pitted staunch conservatives against opponents even further to the right.

There were losses by some high-profile candidates, such as U.S. Rep. Madison Cawthorn and an Idaho gubernatorial hopeful, Lt. Gov. Janice McGeachin. The former spoke of a “spiritual battle” on Capitol Hill and a need for “strong, God-fearing patriots.” The latter was photographed holding a gun and a Bible and said, “God calls us to pick up the sword and fight, and Christ will reign in the state of Idaho.”

Some of Idaho’s Republican primaries for the Legislature were won by candidates touting Christian values or sharing priorities with Christian nationalists, such as sports bans for transgender athletes. U.S. Rep. Marjorie Taylor Greene, R-Ga., who uses biblical phrasing to “be a watchman on the wall” against those seeking to “destroy our faith,” easily won her primary.

Watchers of Christian nationalism consider Mastriaono’s win — in a rout, with 44% in a crowded field despite opposition from the state party establishment — by far the highest-profile victory for the movement.

Mastriano has called the separation of church and state a “myth.”

After his victory, the comments section of his campaign Facebook page had the feel of a revival tent:

“Praise Jesus!” “God is smiling on us and sending His blessings.” “Thank you Father God!!”

Mastriano “is a unique case where he really does in his speeches highlight this apocalyptic idea” where his supporters and causes are on God’s side, said Andrew Whitehead, sociology professor at Indiana University-Purdue University Indianapolis and co-author of “Taking America Back for God: Christian Nationalism in the United States.”

“It literally is good and evil,” he continued. “There’s no room for compromise, so that is the threat to democracy.”

In the book, Whitehead and co-author Samuel Perry measured rates of Christian nationalism by drawing on a 2017 Baylor University survey. It gauged opinions on such things as America’s role in God’s plan and whether the U.S. should be declared a Christian nation, advance biblical values and allow school prayer and religious displays in public places.

Their research found about one in five Americans align with many of those views. That’s down from nearly one in four a decade earlier, just as Americans have become less religious overall. But Whitehead said Christian nationalists, who are more numerous among Republicans, can be expected to maintain their fervor.

Christian nationalism is emerging alongside and in some cases overlapping with other right-wing movements, such as the conspiratorial QAnon, white supremacy, and denialism over COVID-19 and the 2020 election. Christian prayers and symbols featured prominently in and around the U.S. Capitol during the Jan. 6, 2021, insurrection there.

Mastriano, who sought to overturn Pennsylvania’s vote for Joe Biden in 2020, attended the rally preceding the attack and chartered buses to bring others. Though he says he left when things turned violent, video showed he passed through “breached barricades and police lines,” according to a Senate Judiciary Committee report.

Robert Jones, CEO of the Public Religion Research Institute, said those Jan. 6 displays were not surprising.

According to a recent survey by the institute, white evangelical Christians were among the strongest supporters of the assertion that God intended America as a “promised land” for European Christians. Those who backed that idea were far more likely to agree that “true American patriots may have to resort to violence … to save our country.”

“To my mind, white Christian nationalism is really the threat,” Jones said.

Conservative Christian themes are also playing a role in local elections, including in blue states, although many proponents say they view it not as nationalism but as supporting their religious freedom and values.

Pastor Tim Thompson of 412 Church in Murrieta, California, who hosts a YouTube channel with more 9,600 subscribers and envisions a conservative future for the state, recently started a political action committee aiming to “take back our school boards” and give parents authority over curriculum.

Judeo-Christian values are the foundation of America, he argued.

“People are afraid to speak up for these values because they are afraid that the left is going to slap a label like ‘racist’ or ‘Christian nationalist’ on them,” Thompson said. “I don’t care about those labels, because my wife, children, church and community know who I am.”

Pastor Jack Hibbs of Calvary Chapel Chino Hills in Chino Hills, California, has also sought to influence local elections. While he does not let candidates campaign at the church, he frequently offers endorsements as a way of signaling to his flock those who are “pro-family, pro-life and pro-freedom.”

But “the hair on my neck goes up” when he hears the term “Christian nationalism,” he said. And he was embarrassed to see Christian imagery during the Jan. 6 riot: “That was a sad day, to see those sacred symbols and words pimped like that.”

Yet while he believes the founders created a secular nation, Hibbs said every Christian should have an equal say.

Elizabeth Neumann, chief strategy officer for Moonshot, a tech company that aims to counter online violent extremism, disinformation and other harms, said Christian nationalism began picking up steam around 2015 amid a rising narrative of purported persecution of Christians.

Neumann, who served in the George W. Bush and Trump administrations and grew up in an evangelical Christian household, called the movement “heretical and idolatry” and an “apocalyptic vision (that) very often leads to violence.” Many pastors are pushing back against it, she added.

“I see Christian nationalism as the gasping, dying breath of the older generation in America that is afraid that Christians are going to be replaced,” she said.

Associated Press religion coverage receives support through the AP’s collaboration with The Conversation US, with funding from Lilly Endowment Inc. The AP is solely responsible for this content.