People pay their respect at a memorial set up outside of the Robb Elementary School in Uvalde, Texas Thursday, May 26, 2022. Law enforcement authorities faced questions and criticism Thursday over how much time elapsed before they stormed the Texas elementary school classroom and put a stop to the rampage by a gunman who killed 19 children and two teachers. (AP Photo/Dario Lopez-Mills) 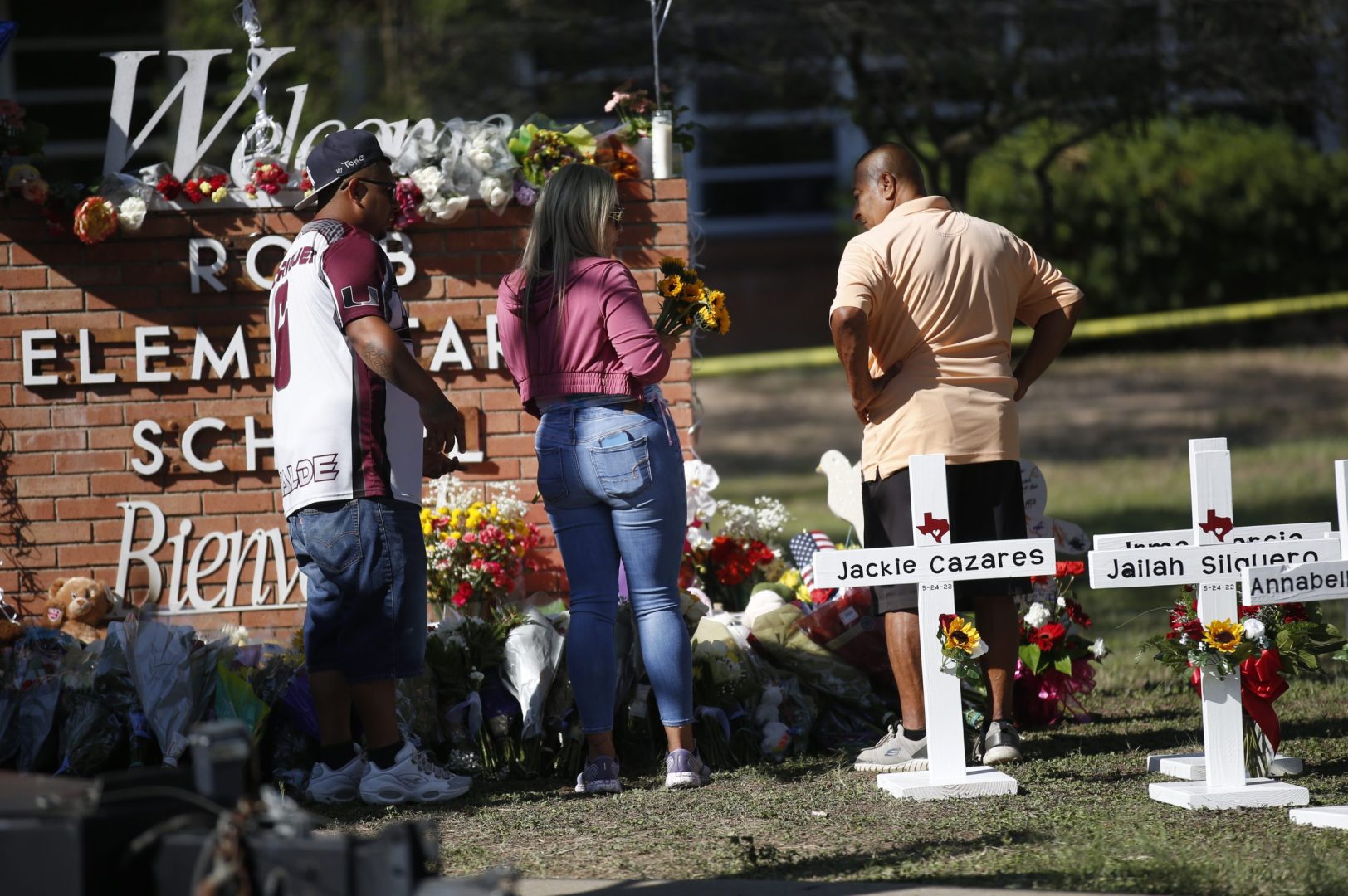 People pay their respect at a memorial set up outside of the Robb Elementary School in Uvalde, Texas Thursday, May 26, 2022. Law enforcement authorities faced questions and criticism Thursday over how much time elapsed before they stormed the Texas elementary school classroom and put a stop to the rampage by a gunman who killed 19 children and two teachers. (AP Photo/Dario Lopez-Mills)

(Undated) — America’s latest mass shooting, at an elementary school in Uvalde, Texas, has claimed the lives of 19 children and two adults. The 18-year-old gunman legally purchased two AR-15-style rifles before the attack, thus catapulting conversations about gun control and regulation to the forefront for Second Amendment defenders and gun control advocates. Here is what some gun owners across the U.S. are saying.

Hilary Hellwig, 34, is a longtime gun owner and gun rights advocate from Pennsylvania. She said she believes that it’s important for individuals to protect themselves and that more regulations aren’t necessary, nor would they prevent mass shootings.

Hilary Hellwig, a 34-year-old hairdresser from Souderton, Pa., comes from a family of hunters and military veterans. Her father took her to buy her first gun for self-protection when she turned 21, Hellwig told NPR, but she believes she should have been carrying a weapon earlier than 21.

“The world is a crazy place, and I always felt safe knowing I could protect myself as a young woman — pepper spray can only get you so far,” Hellwig said. “I believe[d] then and I believe now we have the right to bear arms and that should never change.”

When asked whether she thinks the shooting in Uvalde should serve as a turning point for gun control, Hellwig said no: “People will always find a way to harm one another if they really want to.” Her views on gun control haven’t changed after the shootings in Buffalo, N.Y., and Texas.

Instead of stricter gun laws, she believes teachers should be allowed to carry firearms to protect themselves and their students should the need arise. She believes that attackers would be dissuaded if they knew teachers weren’t defenseless targets.

“Stop making school such an easy target,” she said.

She remembers when she was a student at Temple University in Philadelphia, where she would receive notifications on her phone about students getting attacked in the area every other week, she said.

“It’s about how guns can protect and make us feel safe,” Hellwig said. “I know it would [have] made me feel safer if I was carrying or I knew my teachers were as well.”

Lynn-Wood Fields was born and raised in Montana, where guns were a part of everyday life. She grew up shooting and hunting with her father, who always stressed the importance of weapon safety. She believes more regulations are needed in the wake of America’s mass shootings.

Lynn-Wood Fields, 42, was born and raised in Whitefish, Mont., just outside Glacier National Park, where she grew up shooting and hunting with her father. And in high school, most people she knew had guns kept in their cars — not just for recreational shooting, she said, but for hunting to literally put food on the table.

From the time she was young, her father instilled the importance of weapon safety. Her father was also a strong supporter of gun regulations, she said. ” ‘It just makes common sense,’ ” Fields said her father told her.

She was a college freshman with many friends still attending high school when the 1999 Columbine High School mass shooting happened. But in 2012, when a gunman shot and killed 20 children and six educators at Sandy Hook Elementary School in Connecticut, she was a mother terrified for her own son. That was her turning point.

“We have created a situation with domestic terrorism where people don’t feel safe. I mean, I have thought when I’m out in public at a farmers market, ‘What if this is the moment?’ ” she told NPR. “That is not healthy, for us to be thinking as a country, as somebody to walk around and think, ‘It could happen here.’ ”

With so many mass shootings over the years, Fields said she thinks that background checks should be in place and that AR-15-style rifles should be banned — or at least high-capacity magazines. She also believes more parents need to be elected into positions of power to push gun control legislation through, instead of laws getting hung up because of party lines.

Fields said she worries so much only because she believes Montanans are some of the kindest people on the planet. However, she said, it takes only one person to commit an atrocity.

She hugged her two sons, a kindergartner and a sixth-grader, extra tight when she dropped them off at school in Missoula the day after the shooting in Uvalde. As a mother, Fields said, it’s her job to make sure her children feel safe, but at times she questions whether she’s lying when she promises they will be OK.

“You don’t want them to feel like they can’t go to school, but then you’re also feeling like, ‘Am I lying to you? Like, are you safe?’ ” Fields said. “That is a real hard thing in our hearts right now.”

Gary Marbut, 75, is the president of the Montana Shooting Sports Association and has over 50 years of firearms experience. Marbut said he doesn’t think new gun regulations need to be put into place following the mass shooting in Uvalde. Instead, he believes teachers should be armed to deter such attacks.

Gary Marbut, a 75-year-old Army veteran and president of the Montana Shooting Sports Association, has over five decades of firearms experience. He lives in Missoula, the same city as Fields, where he enjoys competitive shooting. He believes the tragedy in Uvalde “confirms that events like that are unstoppable.”

Marbut said that school shootings are rare and that there are countless other dangers parents and their children should be concerned about. Having said that, he also believes teachers should carry weapons to defend students and themselves if necessary. He said he’s reluctant to see schools turn into “mini-prisons” guarded by armed police officers.

“I think, unfortunately, that maybe in these times that’s unavoidable,” Marbut said.

He said law enforcement should undergo better training when it comes to handling active shooter situations.

LeVar Bryan, 42, works as a security specialist for the Department of Energy in Tennessee. He said he believes people should have the right to have firearms to defend themselves, but also believes some regulations need to be in place.

LeVar Bryan, 42, spent seven years with the Anderson County Sheriff’s Office in Tennessee after graduating from college. These days, he works as a protection specialist with the Energy Department in Oak Ridge, just outside Knoxville. He’s originally from Beaufort, S.C., and many of the men in his family served in the military and law enforcement, while the women worked as educators in South Carolina and surrounding states.

As a father of three, he’s worried by the news of mass shootings in schools, which is why he believes schools need to do a better job of protecting students.

“I worry about the officers placed in those schools and whether they are able to perform the tasks needed to take care of these kids,” Bryan said. “This country should legally have to provide [parents] the assurance that these kids are going to be safe. We have to make every damn effort.”

He also said firearm regulations need to have a standard set across the country. But instead of leaving policy development up to the politicians, the government needs to bring in experts from across the force protection world to help make decisions.

And though he believes in the right to bear arms for everyday citizens to protect themselves, he thinks politicians twist and skew the Second Amendment. Weapons like AR-15-style rifles are devastating, he explained, and anyone wielding a weapon like that should have to undergo some kind of vetting process.

“Everything from back then isn’t applicable now. At that point in time, they said it was for a well-trained militia, a group that got together to focus on the craft to have the ability to protect others,” Bryan said. “My belief is that we should all be able to have weapons to have an even playing field for everyone, but you should have to go through certain qualifications.”

Dustin Fulmer is a member of the Sandy City Fire Department and served eight years in the Air Force. He enjoys hunting and recreational shooting, and though he supports some increased firearm regulations, he believes too many weapons are in circulation for new legislation to make much of a difference.

Before joining the Sandy City Fire Department just outside Salt Lake City as a paramedic, Dustin Fulmer, 29, served eight years active duty in the Air Force as a pharmacy tech and then as a close air support coordinator. He grew up shooting and hunting in Nebraska and continues to do so in Utah, where he has lived the past three years.

Fulmer said part of him believes in gun control — such as raising age requirements, registering weapons and implementing background and mental health checks — but another part of him thinks just too many weapons are in circulation for those efforts to make a difference.

At the same time, just the thought of responding to a mass shooting as a first responder makes him sick to his stomach, especially as a man who wants to have kids someday.

A place to start would be to treat weapons like motor vehicles, Fulmer said, where individuals need to pass a series of tests from time to time to continue having and using firearms.

He suggested gun owners undergo a safety test to ensure they can handle weapons safely, as well as mental health checks every handful of years. If an individual is going through a crisis or is found unfit to possess their firearms, those arms should be taken away until that individual is deemed mentally fit enough to have them again.

“You will definitely eliminate a lot of those things that can happen,” he said. “But you’re still going to have those onesies [and] twosies, just pure evil [people] that are going to find a way.”