House Minority Leader Kevin McCarthy, R-Calif., heads to his office surrounded by reporters after House investigators issued a subpoena to McCarthy and four other GOP lawmakers as part of their probe into the violent Jan. 6 insurrection, at the Capitol in Washington, Thursday, May 12, 2022. The House Select Committee on the January 6 Attack has been investigating McCarthy's conversations with then-President Donald Trump the day of the attack and meetings that the four other lawmakers had with the White House as Trump and his aides conspired how to overturn his defeat. (AP Photo/J. Scott Applewhite) 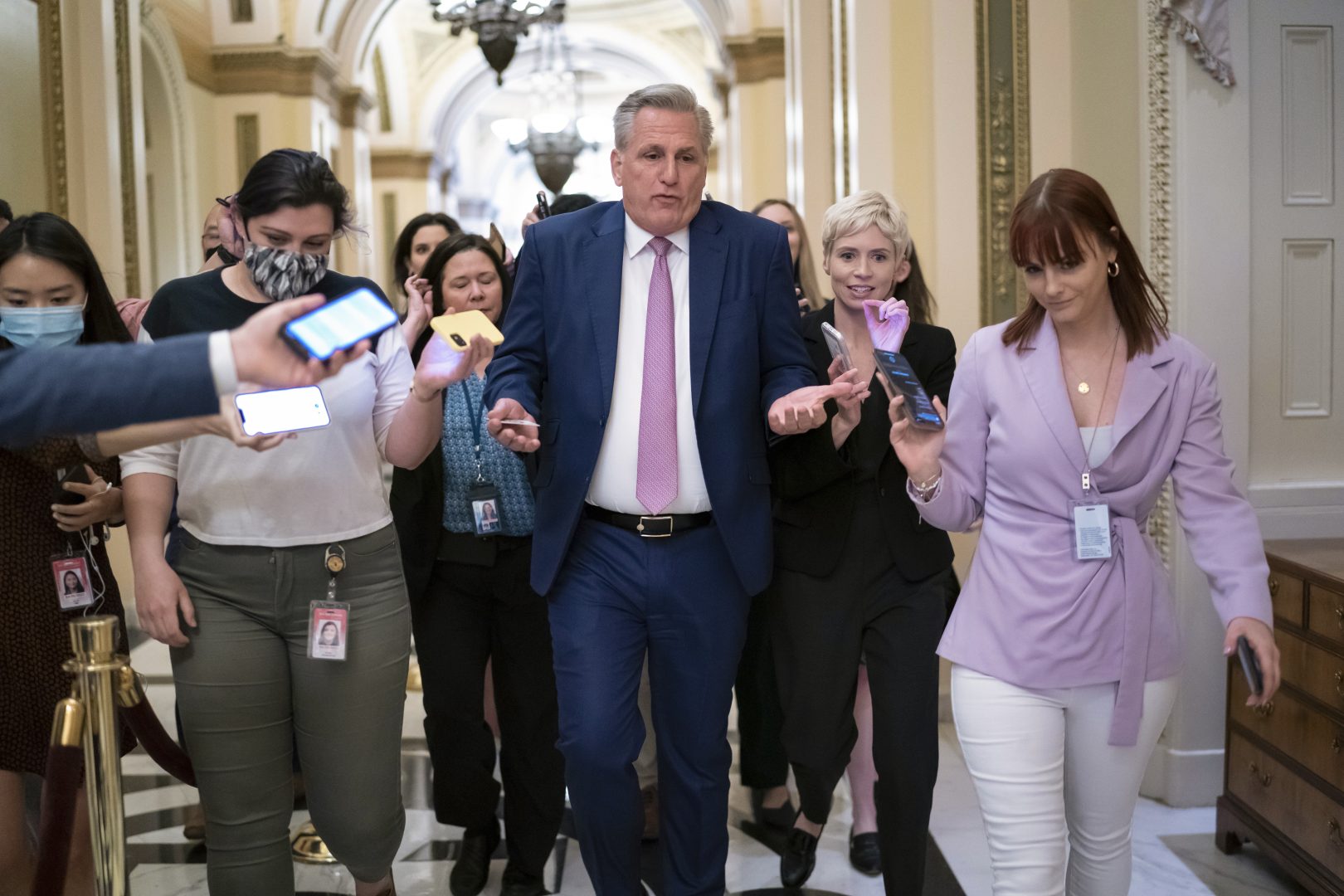 House Minority Leader Kevin McCarthy, R-Calif., heads to his office surrounded by reporters after House investigators issued a subpoena to McCarthy and four other GOP lawmakers as part of their probe into the violent Jan. 6 insurrection, at the Capitol in Washington, Thursday, May 12, 2022. The House Select Committee on the January 6 Attack has been investigating McCarthy's conversations with then-President Donald Trump the day of the attack and meetings that the four other lawmakers had with the White House as Trump and his aides conspired how to overturn his defeat. (AP Photo/J. Scott Applewhite)

(Washington) — Republican Leader Kevin McCarthy is making it clear that he will likely defy a subpoena from the House committee investigating the Jan. 6, 2021, Capitol attack, escalating a standoff with the panel over his and other GOP lawmakers’ testimony.

In an 11-page letter to the panel Friday, an attorney for McCarthy argued that the select committee does not have the authority to issue subpoenas to the lawmakers under House rules and demanded answers to a series of questions and documents if his client were to comply.

Attorney Elliot Berke requested a list of “topics that the Select Committee would like to discuss with the Leader, and the constitutional and legal rationale justifying the request.”

“I expressly reserve Leader McCarthy’s right to assert any other applicable privilege or objection to the Select Committee’s subpoena,” Berke wrote.

Committee spokesperson Tim Mulvey responded Friday evening, “Leader McCarthy and other Members who have been served subpoenas are hiding behind debunked arguments and baseless requests for special treatment.”

He added, “The refusal of these Members to cooperate is a continued assault on the rule of law and sets a dangerous new precedent that could hamper the House’s ability to conduct oversight in the future.” Mulvey said committee Chairman Bennie Thompson, D-Miss., “will formally respond to these Members in the days ahead.”

The House panel believes testimony from the Republican lawmakers is crucial to their investigation as each of the men was in contact with then-President Donald Trump and his allies in the weeks and days leading up to the Capitol insurrection. Some participated in meetings and urged the White House to try to overturn the 2020 presidential results.

McCarthy has acknowledged he spoke with Trump on Jan. 6 as Trump’s supporters were beating police outside the Capitol and forcing their way into the building. But he has not shared many details. The committee requested information about his conversations with Trump “before, during and after” the riot.

His apparent defiance presents a new challenge for the committee after lawmakers decided to take the extraordinary and politically risky step of subpoenaing their own colleagues.

“For House Republican leaders to agree to participate in this political stunt would change the House forever,” the California lawmaker wrote Thursday in an op-ed in The Wall Street Journal with GOP Rep. Jim Jordan of Ohio.

The committee now must decide whether to enforce the subpoenas even as it looks to wrap up the investigation and prepare for a series of public hearings in early June. It could refer the lawmakers to the House ethics committee or take steps to hold them in contempt.

The subpoenas were issued to McCarthy, Jordan, and Reps. Scott Perry of Pennsylvania, Andy Biggs of Arizona and Mo Brooks of Alabama in mid-May. The panel has already interviewed more than 1,000 witnesses and collected more than 100,000 documents as it investigates the worst attack on the Capitol in two centuries.

“I have no relevant information that would advance any legitimate legislative purpose,” Jordan said in a letter detailing his reasons for not cooperating. The others indicated after the subpoenas were issued that they too would not cooperate.

Perry’s lawyer sent the committee a letter earlier this week saying he could “not in good conscience comply” with the subpoena because he does not believe it is valid under House rules.

Requests for comment from Biggs and Brooks were not immediately returned.

The panel had previously asked for voluntary cooperation from the five lawmakers, along with a handful of other GOP members, but all refused to speak with the panel, which debated for months whether to issue the subpoenas.

McCarthy and the others were summoned to testify in front of investigators this week and next week. McCarthy, who aspires to be House speaker if Republicans take over the majority next year, indicated that the committee’s decision will have a lasting impact.

“Every representative in the minority would be subject to compelled interrogations by the majority, under oath, without any foundation of fairness, and at the expense of taxpayers,” he wrote in the op-ed.

In a separate move, McCarthy and the No. 2 House Republican, Louisiana Rep. Steve Scalise, filed a court brief in support of Donald Trump ally Steve Bannon, who is facing criminal contempt charges for defying a subpoena from the committee. In the brief, lawyers for the two write that the committee does not have the authority to issue subpoenas, an argument that has been dismissed in other court proceedings.

The lawyers also wrote that McCarthy and Scalise filed the brief “out of concern for the potential damage to House institutional” rules and order.