Passing Pa.’s next budget could be painful after high-profile GOP primary losses 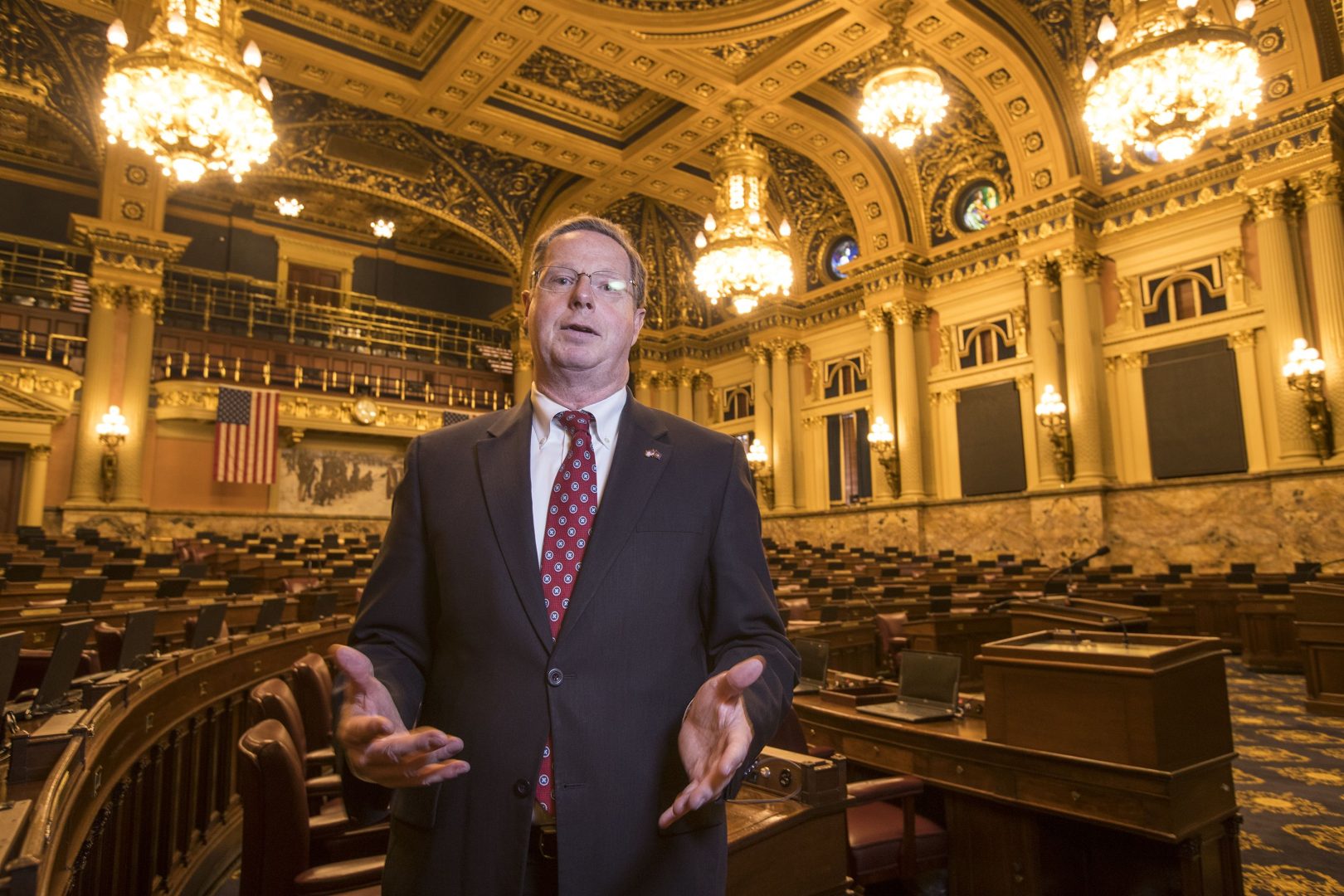 (Harrisburg) — The primary defeat of one of Harrisburg’s top budget negotiators and the potential loss of another could embolden a contingent of conservative state House Republicans to derail the annual process.

At least five Republican House incumbents lost reelection on May 17, including Stan Saylor (R., York), who chairs the powerful Appropriations Committee. Saylor’s state Senate counterpart, Pat Browne (R., Lehigh), was losing by 19 votes as of May 27 and is considering a recount.

As the majority Appropriations Committee chairs, Browne and Saylor play a leading role in negotiations with Gov. Tom Wolf and top Democrats, hammering out an annual budget that directs tens of billions of state tax dollars to education, human services, and economic development.

Both lawmakers have served in the legislature for decades and were elevated to their prominent committee positions by their Republican colleagues during closed-door elections to assign leadership roles.

But they found themselves targeted not only by a political action committee with millions of dollars at its disposal during the May 17 primary, but by members of their own party who claimed they weren’t conservative enough.

Capitol insiders believe their poor primary performances could inspire frustrated Republicans to use the budget, which must be passed each year, as leverage to force Wolf to expand voter ID, end mail voting, or ban vaccine mandates.

Amid budget negotiations in 2021, Wolf vetoed the Republicans’ omnibus election overhaul, which included stricter voter ID requirements, and a bill that would have blocked schools and government agencies from requiring vaccination to “use any public service.”

“We could have used the power of the purse strings a lot more,” said state Rep. Mike Jones (R., York), who endorsed Saylor’s opponent and has emerged as a vocal opponent of GOP leadership. “We could have been a lot more visible in the public. And we could have picked a few more fights on principle.”

It’s unclear how many votes Jones and his allies can sway, but it takes just 68 lawmakers in the 203-member lower chamber to block parts of the budget, potentially upsetting the delicate negotiations.

The state Capitol saw three late budgets — including one nine-month long impasse — in Wolf’s first four years in office over the Democrat’s plans to raise taxes to increase education funding.

Failure to pass an on-time budget can have far-reaching consequences, including forcing domestic violence shelters to close or putting school districts into debt to cover their costs.

Those first-term fights have been replaced by on-time negotiated budgets, partially due to higher-than-expected tax revenues, which have allowed Wolf and lawmakers to increase state spending on human services and public schools without a tax hike.

Browne and Saylor played key roles in those deals. But the fact that state spending increased at all frustrated some, including Citizens Alliance of Pennsylvania, a political action committee that targeted Browne and Saylor during the primary.

Leo Knepper, political director of the PAC, said that he hoped the primary was a wake-up call to other Republicans to stop voting for Wolf’s deals and instead challenge the governor’s calls for more spending on education.

“It’s not necessarily an issue of money,” Knepper said. “It’s an issue of we’re funding buildings, we’re not funding students.”

He said rank-and-file Republicans need to “recognize that there are significant consequences when they say one thing and do another.” 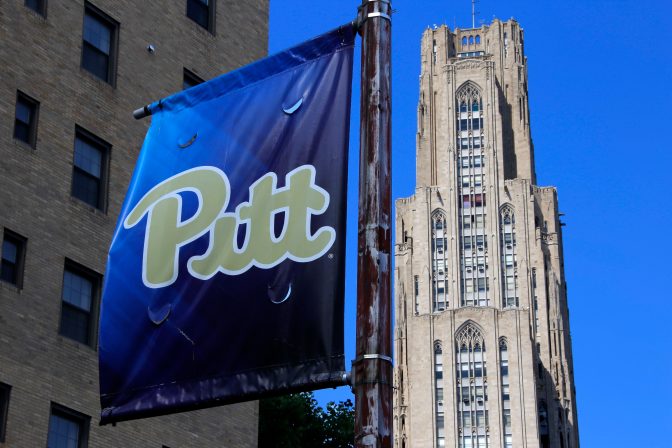 Even before the primary, some were taking note of Knepper’s warning.

In late April, state Rep. Aaron Bernstine (R., Lawrence) made a seldom-used procedural motion to bring a constitutional amendment that would restrict state spending up for a floor vote.

Conservative groups have long pushed for the measure to pass. But Republican leadership has sided with a small block of labor-friendly Republicans to oppose the amendment, in hopes of protecting those lawmakers come election time.

Bernstine’s motion failed 82-120, but a majority of Republicans backed it.

“I’m sure myself and others will use all mechanisms within the existing House rules in order to provide constituents and voters the opportunity to know where people stand on issues,” said Bernstine, who won his competitive primary with support from Knepper’s group. “That’s how you move an agenda forward. And I’m sure that the leaders will be putting quite a few bills forward for us to vote on.”

Capitol lobbyists and lawmakers predicted that Bernstine’s maneuver could foreshadow similar rank-and-file rebellions as the legislature tries to push through a budget in June. One likely target is the University of Pittsburgh, a private school that received $154 million in state support last year, most of the money earmarked to help keep in-state students’ tuition low.

But that funding has become a political hot potato in recent years as anti-abortion activists have slammed the university for engaging in research using fetal tissue.

Pitt’s spending bill could be an easy target for insurgents. Under the state constitution, funding for schools like Pitt requires a two-thirds majority to pass — meaning 68 lawmakers can block it. Last year, due to anti-abortion activists’ concerns alone, 51 Republicans opposed the funding bill.

That vote total could grow this year after a national conservative group challenged at least one sitting GOP lawmaker who voted for Pitt’s funding. The lawmaker, state Rep. John Hershey (R., Juniata), lost his primary.

Some House Republicans are also directing their anger at Pitt because the university’s former chancellor, Mark Nordenberg, chaired the state redistricting commission this cycle, and approved maps that will likely cut into the House Republican majority.

In April, the university even sent out an email to students, asking them to contact their legislators over the yearly allocation.

“Not only would [Republican leadership] not eliminate funding for one year, they wouldn’t even cut it 10%,” Jones said. “I begged them to do it. And they wouldn’t do it.” 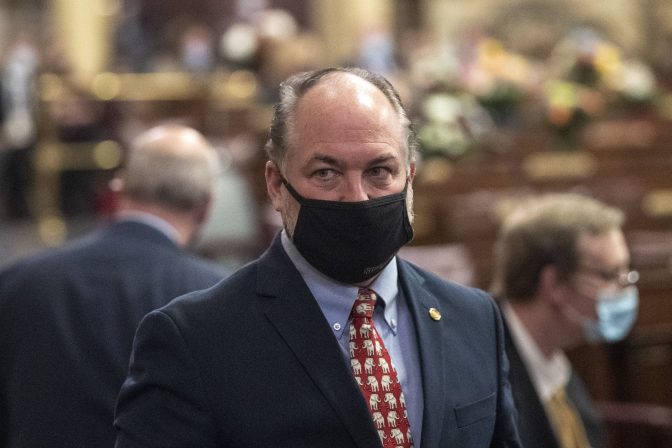 Jones’ decision as a junior caucus member to endorse the opponent of Saylor, a senior member of leadership, was a rare and dramatic break in party discipline, and one that others in leadership noticed.

In a closed-door meeting Monday, House Majority Leader Kerry Benninghoff (R., Centre) told his assembled colleagues, without naming names, that the caucus needed to work as a team, three House Republican sources told Spotlight PA. Those sources requested anonymity because they were not allowed to disclose the details of private party discussions.

“We’re spending all this time eating our own while the Democrats are licking their chops,” one Republican lawmaker said, summarizing Benninghoff’s arguments.

Later that day, GOP leadership removed Jones and state Rep. David Zimmerman (R., Lancaster) from all but one of their committees — a common punishment for lawmakers who buck leadership or have otherwise been accused of misconduct.

Zimmerman appeared on a podcast with a candidate running against state Sen. Ryan Aument (R., Lancaster). The challenger was aligned with Audit the Vote PA, a group that has spread misinformation about fraud in the 2020 election.

The tensions aren’t new. GOP lawmakers and activists have debated whether the legislature is conservative enough for years. But intraparty disagreements over how to respond to former President Donald Trump’s false claims of election fraud have added fuel to the fire.

Mastriano lost the battle in the state Senate — Corman stripped him of his role leading the investigation — but handily bested Corman and a big field of Republican luminaries in the primary election to be the GOP’s 2022 gubernatorial nominee.

In the upper chamber, Aument, who won his primary election, downplayed any divides or agenda shifts stemming from Browne’s potential loss.

Other conservative lawmakers, such as state Rep. Daryl Metcalfe (R., Butler), said that past disputes will not prevent Republicans from unifying come June against Wolf and his budget request.

Primaries, he added, are “the nature of the business.”

Still, a few lawmakers seemed to chafe at leadership’s sudden invocation of an old-school bit of legislative hardball against Jones to enforce party unity.

“I think it was a rash decision for sure,” said state Rep. Dawn Keefer, who is also a conservative Republican from York County.

She added that Benninghoff’s comments to the caucus were part of an “ongoing conversation.”

Other Republicans viewed Benninghoff’s actions as a belated attempt to check the right wing of their caucus.

“I think this conversation should have been had years ago,” one lawmaker said. “The damage is done.”

Recount cranks up in Pennsylvania's GOP primary for U.S. Senate