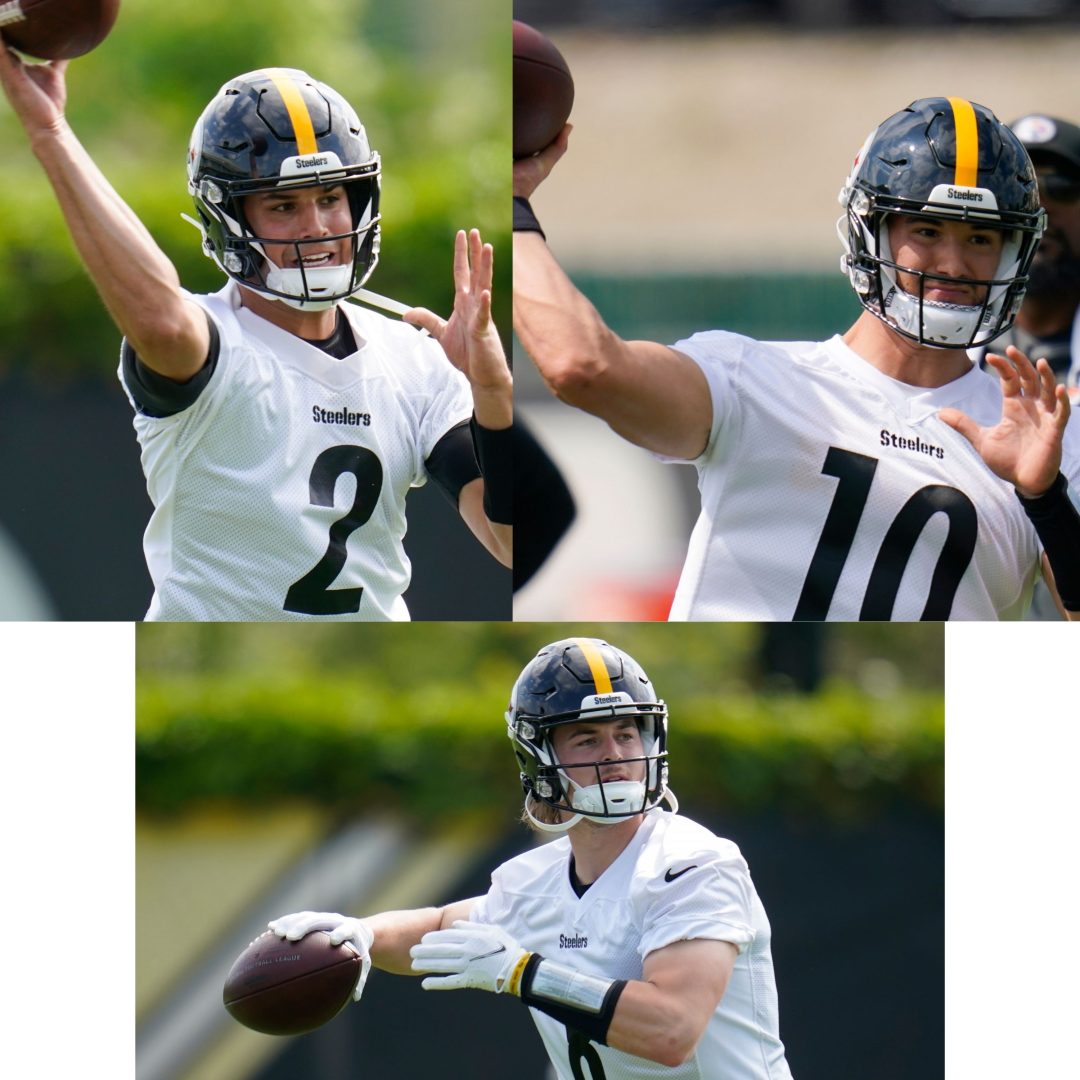 (Harrisburg) — Mike Tomlin isn’t into drawing conclusions on anything in the middle of the spring. Not when the Pittsburgh Steelers coach is watching his players run around without a shoulder pad in sight, two months away from the grind of training camp and nearly two more before the gantlet that awaits in the fall.

“Nobody’s going to win a job or lose a job out here in shorts in May,” Tomlin said Tuesday as the Steelers began organized team activities.

True, but for the first time in Tomlin’s long tenure, he is preparing for a season without knowing who the starting quarterback will be when the Steelers take the field in Cincinnati on Sept. 11.

Ben Roethlisberger is gone following his retirement in January and while yeah, it was strange for Tomlin not to see Roethlisberger’s familiar No. 7 out there with the rest of the first string.

“It is (strange), but you know, it’s ever-changing in this business and that’s a component of it, just as it’s weird to be out here without (recently retired general manager) Kevin Colbert in an official capacity as well,” Tomlin said.

Maybe, though Colbert was out there on the practice field chatting with Tomlin in the immediate aftermath while the team methodically narrows down the field to become Colbert’s replacement. An announcement should come relatively soon, with internal candidates Brandon Hunt and Omar Khan still in the mix among a handful of others.

It might take considerably longer for the Steelers to settle on a quarterback, one of the reasons Tomlin cautioned against reading too much into any perceived pecking order, mostly because there isn’t one at the moment.

Recently signed Mitch Trubisky, longtime backup Mason Rudolph and rookie Kenny Pickett will have plenty of time over the next three months to make a case. All entered OTAs with something to prove. 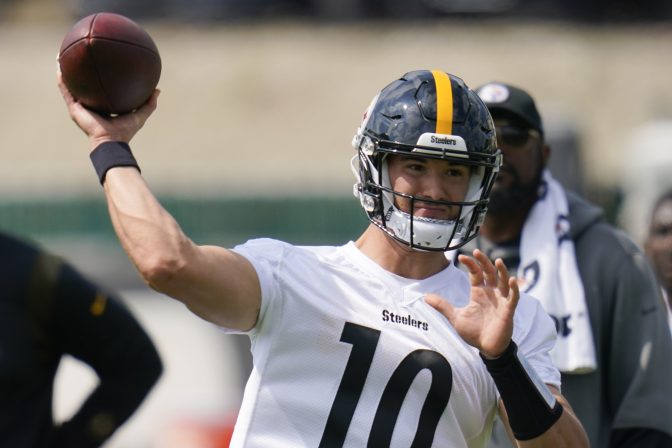 For Trubisky, Pittsburgh offers a chance to hit the reset button on his enigmatic career after the second overall pick in the 2017 draft flamed out in Chicago and spent last season as Josh Allen’s backup in Buffalo.

For Rudolph, it’s an opportunity to prove he’s capable of being a full-time starter after mixed results at best during an extended appearance in 2019 while Roethlisberger recovered from right elbow surgery and a cameo in 2021 that produced an ugly 16-all tie against Detroit.

For Pickett, he’ll get every opportunity to prove his remarkable breakthrough during his final season at the University of Pittsburgh that vaulted him to the 20th overall pick of the draft was no fluke.

While Trubisky took snaps with the starters on Tuesday, followed by Rudolph with the second unit and Pickett with the third, Trubisky downplayed the idea there’s any sort of established rotation.

“I’m just out there to go where they tell me and we’re just competing,” he said, later adding, “we’re going to get reps with everybody at some point. So it’s all about just doing your best work when you’re on the field.”

And Trubisky is confident that his best football is ahead of him. He endured four tumultuous seasons with the Bears, where he posted a respectable record as a starter (29-21), but struggled to develop any chemistry or consistency. He spent a year regrouping in Buffalo before the Steelers signed him to a two-year deal in March.

Six weeks later, Pittsburgh invested a first-round pick in a quarterback for the first time since 2004 when it brought Pickett over from the other side of the building the club shares with the Panthers.

It’s a massive turnaround from where the Steelers were a year ago, when Roethlisberger opted to come back for an 18th and final season and Pittsburgh signed Rudolph to a one-year extension in theory to give him a shot at being the starter in 2022. 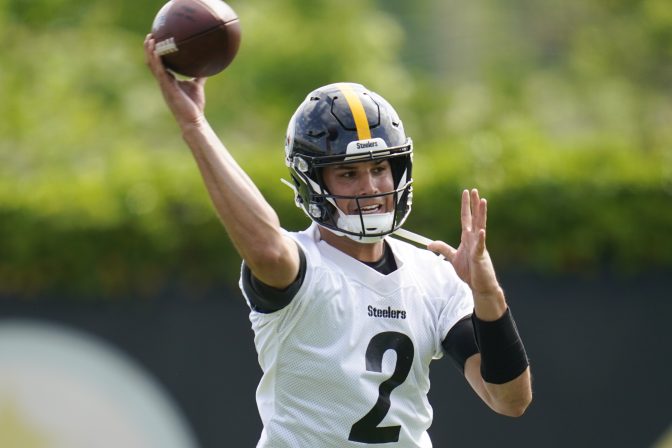 Now 2022 is here and Rudolph finds himself caught between a player who entered the league five years ago with massive expectations and a player entering the league as a well-known quantity locally after breaking just about every passing record at Pitt while leading the Panthers to the ACC championship last fall and finishing third in the Heisman Trophy voting.

Still, Rudolph insists he will have a legitimate chance to start.

“I can’t control what goes on (in the front office), but I’ve been told that (I can win the job) and I think, you know, I’m excited to do my best to compete to be the guy,” Rudolph said.

Though Roethlisberger has kept a low profile publicly since stepping away, he welcomed the Trubiskys over for dinner and reached out to Pickett shortly after the draft. 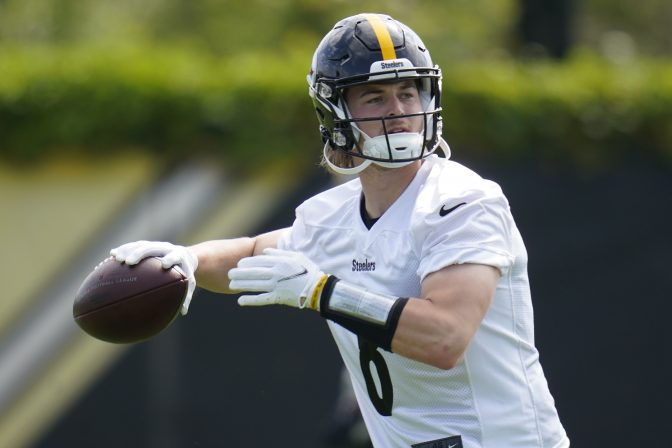 Still, his locker tucked away in the corner is now occupied by recently signed undrafted free agent rookie wide receiver Tyler Snead. And his absence also signaled the end of an era. It’s time for a new one to commence regardless of who is under center in Week 1.

NOTES: Defensive lineman Stephon Tuitt was not in attendance for the start of the voluntary workouts. Tuitt missed all of last season following knee surgery and the death of his younger brother in a hit-and-run. Pro Bowl defensive tackle Cam Heyward said Tuitt is in Indiana and is doing well and will return to Pittsburgh “sooner or later.”