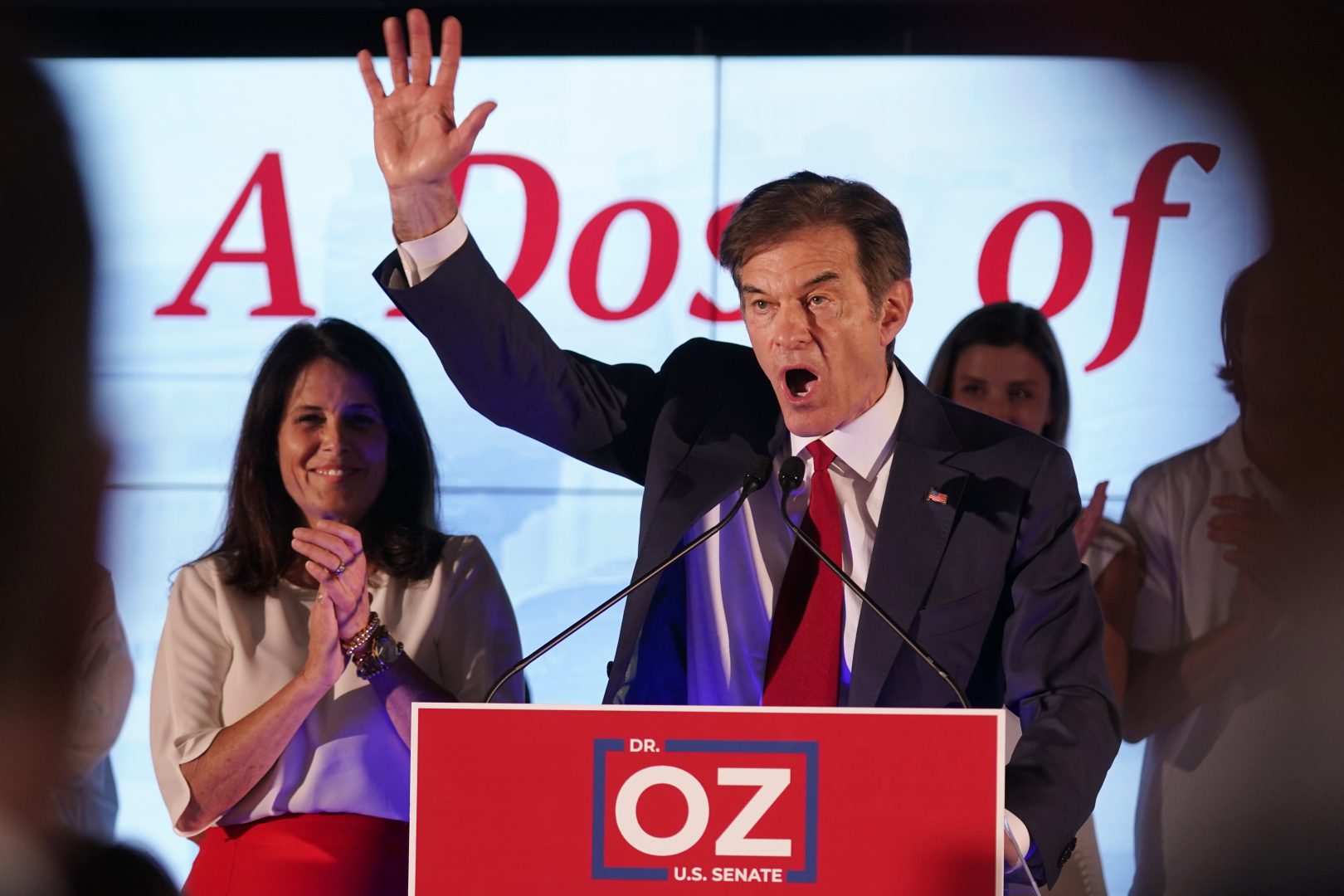 Donald Trump’s choice for Pennsylvania governor won his primary Tuesday night and his Senate pick was locked in an exceedingly close contest as the former president worked to expand his hold on the Republican Party.

Trump’s late endorsement helped put the already surging Doug Mastriano, a far-right state senator, over the top in the GOP governor’s primary in one of the nation’s premier battleground states. But Mehmet Oz, the celebrity heart surgeon endorsed by Trump, was locked with former hedge fund manager David McCormick in a race that was too early to call.

Mastriano has trumpeted the former president’s lies about nonexistent, widespread voter fraud costing him the 2020 election. He was outside the U.S. Capitol when a mob overran it during the deadly 2021 insurrection, which could repel critical moderates in the general election. If he were to win in the fall, he would shape how elections are conducted in Pennsylvania — where the governor appoints the secretary of state, who oversees how elections are run. 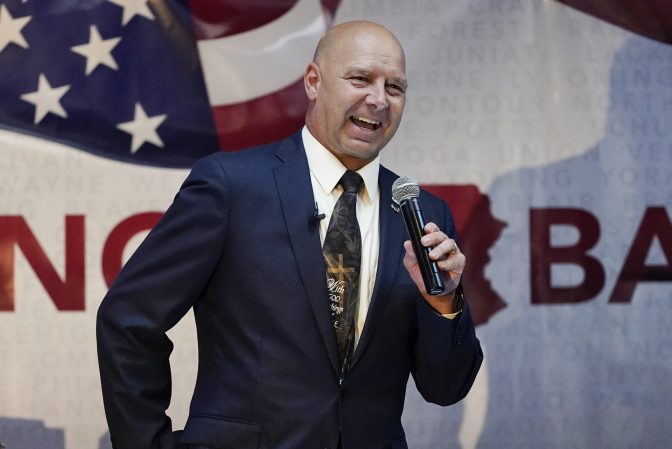 Speaking to his supporters, Mastriano denied he was an extremist.

“They like to call people who stand on the Constitution far right and extreme. I repudiate that. That is crap. That is absolutely not true,” Mastrano said, adding that it was Democrats who have “gone extreme.”

“Under Joe Biden, America is woke and broke,” he said at a victory rally. “We need to put the brakes on this agenda for the sake of hardworking North Carolinians.”

Budd will face Democratic former state supreme court justice Cheri Beasley, who is aiming to become North Carolina’s first Black senator. She declared at a victory party that “this is our moment.”

Mastriano, a retired Army colonel, will face Democratic state Attorney General Josh Shapiro, who was unopposed in his primary.

In another of the night’s closely watched races, John Fetterman, days after a stroke sent him to the hospital, easily won Pennsylvania’s Democratic Senate primary — notching a major victory for his party’s left flank. 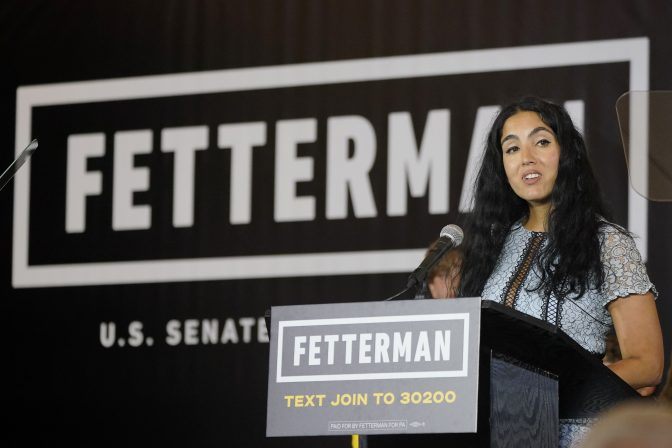 Gisele Barreto Fetterman, the wife of Pennsylvania Lt. Gov. John Fetterman, who is running for the Democratic nomination for the U.S. Senate for Pennsylvania, speaks to supporters after the race was called for Fetterman in Imperial, Pa., Tuesday, May 17, 2022.

Fetterman’s opponent in the fall wasn’t yet clear as Pennsylvania’s GOP Senate contest was too early to call. Oz, a celebrity heart surgeon, and McCormick, who resigned in January as the CEO of Bridgewater Associates, one of the largest hedge funds in the world, were in an exceptionally tight race. Commentator Kathy Barnette, who had appeared to be gaining late momentum, was trailing.

Tuesday marked the busiest night of the nascent primary season, with contests also being waged in Kentucky, Oregon and Idaho. Both parties are choosing candidates to enter the fall general election, when control of Congress, governor’s mansions and key elections posts are up for grabs.

The 52-year-old Fetterman is known for his hulking, 6-foot-8 stature frame, and tattoos that helped him build a political persona as an outsider. That, combined with his support of top progressive causes such as universal, government-funded health care, helped him easily dispatch Democratic rival U.S. Rep. Conor Lamb, a moderate in the mold of President Joe Biden.

“Fetterman’s victory shows that voters are fed up and want fighters. This should be a wake up call to the entire Democratic Party establishment to fight harder against the fascists and those who obstruct a popular agenda,” Stephanie Taylor, co-founder of the Progressive Change Campaign Committee, said in a statement.

Robert Sweeney, a 59-year-old resident of Hamburg, Pennsylvania, said he voted for Fetterman because “he seemed like a decent guy and knows what he’s doing.”

Pennsylvania’s lieutenant governor, Fetterman could enter the general election campaign facing questions about his health. Following his stroke, he cast an emergency ballot from the hospital and tweeted Tuesday that he’d successfully undergone surgery to install a pacemaker. He said he was “on track for a full recovery.”

And Fetterman will likely face scrutiny over a 2013 incident when, shotgun in hand, he confronted a Black man because he suspected the man was involved in gunfire nearby. The man, Christopher Miyares, was unarmed and said in a TV interview that he had been jogging when Fetterman, who is white, pulled up in his pickup and pointed the shotgun at him. Fetterman has denied pointing the shotgun at Miyares and said it wasn’t loaded.

Elsewhere, a setback for Trump came when North Carolina Republican incumbent Rep. Madison Cawthorn, who was dogged by a series of high-profile blunders, lost to state Sen. Chuck Edwards. Trump posted this week that Cawthorn “made some foolish mistakes, which I don’t believe he’ll make again” and added, “let’s give Madison a second chance!”

Some conservative voters, meanwhile, were suspicious of the ideological leanings of Oz, who gained fame as a frequent guest on Oprah Winfrey’s talk show. The surgeon has spent much of the campaign in a bitter and heated fight with McCormick. 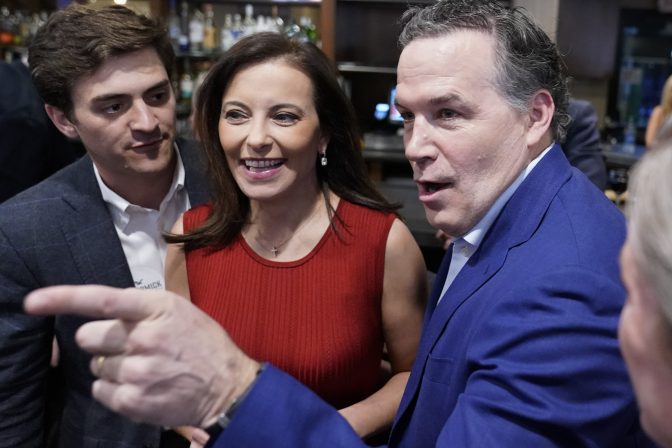 Republican candidate for U.S. Senate in Pennsylvania, Dave McCormick and his wife Dina Powell greet supporters as he arrives for his returns watch party in the Pennsylvania primary election, Tuesday, May 17, 2022, in Pittsburgh.

Trump, who has held campaign-style rallies with Oz, insists he is the best candidate to keep the Senate seat in Republican hands in the fall.

Trump used the race’s final weekend to back Mastriano, but the state senator is seen as too extreme to woo moderates who are often decisive in general elections.

Mastriano was also outside the Capitol during the insurrection. He has pledged to take the extraordinary step of requiring voters to “re-register” to vote — even though that’s barred by the National Voter Registration Act and likely violates significant protections under federal, and possibly state, law.

Mastriano also has been subpoenaed by the House committee investigating the Capitol riot following his efforts to name a slate of alternate Electoral College electors in Trump’s favor.

Stacy Steinly, a 51-year-old school bus assistant, cast her ballot in the town of Hamburg, Pennsylvania, about 30 miles west of Allentown. She said she chose Mastriano because “he was sticking by President Trump and saying that everything was fraudulent.”

“Everything he was talking about was making sense,” said Steinly, who wore a black T-shirt that said “Biden is not my president (or anyone else’s) based on legal votes.”