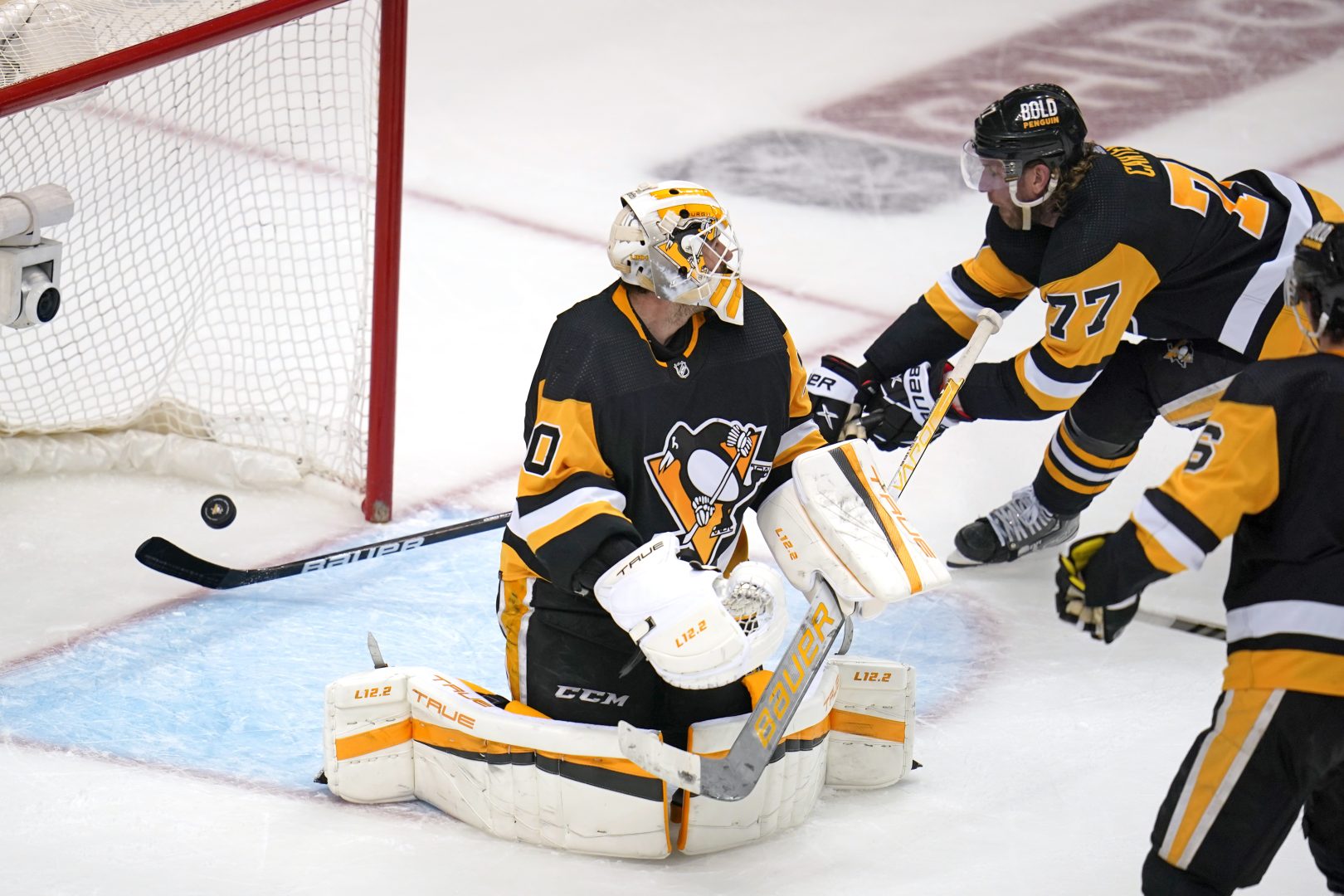 (Pittsburgh)  — Chris Kreider doesn’t believe in dwelling on the past. There is only the next play for the New York Rangers’ star forward.

It’s why Kreider threw linemate Mika Zibanejad’s iPad to the ground out of frustration after Zibanejad stewed over a breakaway during the second period against Pittsburgh’s Louie Domingue on Friday night that ended up with Zibanejad hitting the post.

Kreider told Zibanejad to stop second-guessing himself. It was a good move. It didn’t go in. It happens. Just keep playing.

So Zibanejad did. Kreider, too. And thanks to their relentlessness the resilient Rangers are heading back home for a Game 7.

The two longtime teammates scored two goals apiece — including Kreider’s blast from the point that hit Domingue high then sailed over the goaltender’s head and rolled into the net with 1:28 remaining to lift the Rangers to a 5-3 win over the Sidney Crosby-less Penguins to push their thrilling first-round playoff series to the limit.

“Regardless of the situation, I’m proud of the way this team competes,” Kreider said. “Whether we’re down, whether we’re up, we’re trying to get to our game, trying to play the same way.”

As they have done repeatedly throughout this topsy-turvy series the Rangers rallied from a multiple-goal deficit and will host Game 7 on Sunday at Madison Square Garden with some serious momentum.

“We battled back after (falling behind) and that showed some character in our group,” Rangers coach Gerard Gallant said.

A group looking to advance in the playoffs for the first time since 2017. New York will get a chance thanks to the play of Kreider and Zibanejad, four assists from Adam Fox and 31 saves by Igor Shesterkin, who rebounded from two shaky performances at PPG Paints Arena earlier in the series to silence the chants of “IIIIGOOORRRR” that rained down on him frequently.

“He battles, it’s what he does,” Kreider said of Shesterkin, a finalist for both the Vezina and Hart trophies. “He’s been our best player all year and he continues to be our best player.”

Pittsburgh’s best player, by contrast, was forced to watch his team let a chance to advance slip away from afar. The Penguins played without Crosby, who is dealing with an upper-body injury that forced the captain to miss his first playoff game in five years.

For long stretches, it looked as if Pittsburgh would find a way to move on even with Crosby’s familiar No. 87 out of the lineup. Bryan Rust and Jeff Carter scored during the first period to stake the Penguins to a 2-0 lead and Evgeni Malkin’s breakaway late in the second knotted the game at 3 after the Rangers had surged in front.

In the end, it didn’t matter. Shesterkin held firm in the third period and Domingue — who’s played solidly if not spectacularly while filling in for injured starters Tristan Jarry and Casey DeSmith — let in his first truly soft goal of the playoffs when Kreider’s relatively innocuous shot from the point hit the goaltender’s glove then fluttered behind him.

“Nobody said it was going to be easy,” Pittsburgh defenseman Kris Letang said. “They’re a really good team. They have a lot of skilled players that can score goals. It’s a race to four and we have to regroup, stay positive and get the job done.”