Kathy Barnette, a Republican candidate for a Pennsylvania U.S. Senate seat, speaks during a forum in Newtown, Pennsylvania, on Wednesday, May 11, 2022.

At a small meet-and-greet Thursday in southern Bucks County, reporters were suddenly barred from hearing Barnette speak to potential supporters. 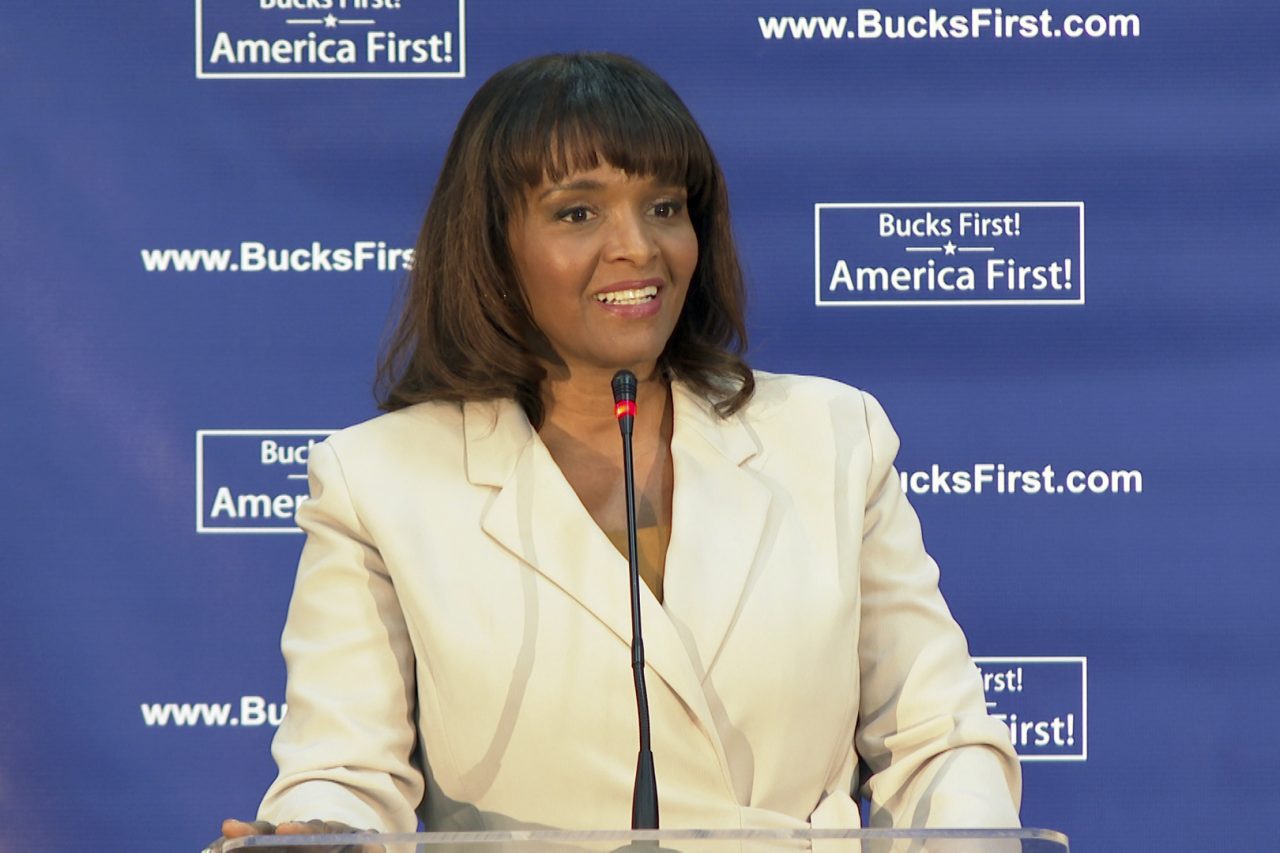 Kathy Barnette, a Republican candidate for a Pennsylvania U.S. Senate seat, speaks during a forum in Newtown, Pennsylvania, on Wednesday, May 11, 2022.

As Kathy Barnette surges in polling on Pennsylvania’s U.S. Senate race, the national press is descending on her campaign – and the campaign has greeted the attention with some reluctance.

At a small meet-and-greet Thursday at the Southampton Fire Company, in southern Bucks County, reporters were suddenly barred from hearing Barnette speak to potential supporters. A spokesman for the campaign, Ryan Rhodes, blamed the reversal on the local Republican club that had organized the event. But the club’s vice president, Jim Monahan, confirmed it had been the campaign’s decision.

In a GOP primary dominated by massive personal spending by TV doctor Mehmet Oz and former hedge fund CEO Dave McCormick, as well as by super PACs backing them, Barnette has largely remained undiscussed until now.

Republican pollster Chris Nicholas said Barnette’s apparent aversion to mainstream scrutiny — even as she has complained about a lack of coverage — may not bode well for her general election chances.

“Pennsylvania, in the last six days of the race, is probably going to get 50 stories about Kathy Barnette and $2.5, $3 million combined on both pro and anti-Barnette ads,” he said. “By May 17 [she’ll] be a lot less of an unknown quantity. It remains to be seen how much appeal she’ll have when she is no longer flying underneath the radar.”

As the last-minute attention has increased, new details about Barnette are becoming widely known.

Reporters have cataloged her history of homophobic or Islamophobic comments and tweets. In a resurfaced February interview with MSNBC, when shown a post in which she’d written that “pedophilia is a cornerstone of Islam,” Barnette responded, “I don’t think that’s me, I would never have said that.”

McCormick and Oz have attempted to smear her as unready for the attention, mainly from a different angle: An ad funded by a PAC backing Oz played clips of Barnette talking about “white racism” and Black Americans feeling disenfranchised — framing these statements as “crazy.” A McCormick staffer dug up an excerpt from Barnette’s 2020 book, in which he said she’d written that she hadn’t voted for Trump in the 2016 primary.

Barnette has granted interviews with conservative outlets and has responded to some of the accusations being lobbed by GOP opponents.

In response to questions about her background, she told conservative radio host Chris Stigall she’d been in the Army Reserves and National Guard, and was honorably discharged in 2000. She also said she had worked as an adjunct professor at Judson University in Illinois, as well as at A.G. Edwards and Sons and Bank of America Capital Asset Management.

She said she’s in her ninth year living in Pennsylvania, and has voted in the commonwealth for a decade. She denied having not voted for Trump in the 2016 primary.

Despite some portions of her background that have been little-scrutinized until now, Barnette’s personal story has been important in her rise.

She tells it often. She grew up poor, born on a pig farm in Alabama to a 12-year-old mother who had become pregnant after being raped — a fact Barnette invokes when describing how she decided abortion should be totally illegal, even in cases of rape.

That story has won her supporters.

Monaghan, the Upper Southampton Republican Club vice president, organized Barnette’s event at his local firehouse after becoming impressed with her when he met her two months ago.

“It turned me off, thoroughly, the infighting between McCormick and Oz. It got to the point I didn’t believe either of them, all falsehoods and lies,” Monaghan said. He added that in comparison, he thinks Barnette is “a true person, she’s believable, she’s clear.”

During her campaign, Barnette has crisscrossed the state on a shoestring budget, attending mostly small events and frequently appearing alongside GOP gubernatorial frontrunner Doug Mastriano. Both Mastriano and Barnett funded buses to the Jan. 6, 2021 insurrection in Washington D.C. and have been prominent proponents of the baseless theory that the 2020 election was rife with fraud.

The two plan to hold a joint rally to cap their primary campaigns on Saturday in Montgomery County.

The strength of both of these anti-establishment, far-right candidates so close to the primary has panicked Republican insiders, who have scrambled to coalesce around an alternative to Mastriano — congressman Lou Barletta got a recent flood of endorsements — and poke holes in Barnette. It culminated in Trump, who endorsed Oz as the best chance Republicans have to win the general election, issuing a statement saying that Barnette “will never be able to win the General Election.”

“She has many things in her past which have not been properly explained or vetted,” Trump wrote — but then seemed to leave open the possibility that he would support Barnette in the future. “If she is able to do so, she will have a wonderful future in the Republican Party — and I will be behind her all the way.”

Barnette, in a brief conversation with reporters after her closed speech in Upper Southampton, said Trump doesn’t “mince words” and she thought his remarks were actually “favorable.”

Monaghan agreed. Of Trump’s exhortation to vote for someone else, he asked, “so what?” Trump “makes a lot of mistakes,” he said, and he thinks the stance on Barnette is one of them.

Trump “invented the MAGA thing,” he said. “It’s a great country, it was going downhill, we needed to do things to bring it back up again. I think Kathy Barnette can do that.”

Every Pa. Republican governor candidate campaigns on election disinformation. Here are the facts.