Parents and students waved LGBTQ pride flags in the air as Lena Barnhat of Doylestown said schools should not be a place for promoting sexuality.

If a student wishes to use a pronoun or name that does not appear on IC, their parent must make the change through the guidance office.

Parents and students waved LGBTQ pride flags in the air as Lena Barnhat of Doylestown said schools should not be a place for promoting sexuality.

A flurry of moves by Central Bucks School District leaders has ignited another battle over civil rights for the LGTBQ community in Bucks County.

In an email sent to teachers on Tuesday, May 3, Lenape Middle School principal Geanine Saullo directed teachers to use student names that appear on the school’s database, called Infinite Campus (IC), for students’ end of the year awards and certificates. For many students, though, what appears on IC is not their correct gender pronouns or names.

If a student wishes to use a pronoun or name that does not appear on IC, their parent must make the change through the guidance office, according to Saullo’s email. 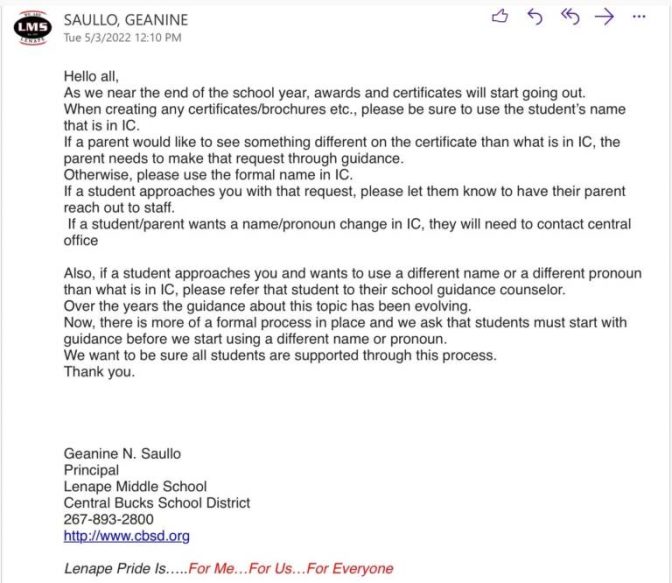 An email from Lenape Middle School Principal Geanine Saullo to teachers regarding the use of student pronouns and names.

The suspension, according to Lenape students, came after Burgess supplied one parent of an LGBTQ student with the contact information for the U.S. Department Office of Civil Rights when the student was being bullied over their identity.

“I think all administration is suggesting that if we don’t self-censor, we will be censored,” said the teacher.

The changes follow an April 19 district directive for school counselors to divide elementary students by the sex they were assigned at birth, not their gender identities, for their classes on puberty, called “Human Growth and Development.” The district also suddenly canceled its training with the Children’s Hospital of Philadelphia Gender and Sexuality Development Clinic for a professional development day on April 14.

The district’s decisions amplify an already hostile learning environment for LGBTQ students, according to students, parents, and teachers. For district employees, the moves have also intensified a climate of fear when it comes to speaking up about injustices.

Central Bucks School District is the third largest in the state, serving about 18,000 students.

Community members, students, and parents showed up in force to Tuesday evening’s Central Bucks school board meeting, many geared with LGBTQ and trans pride flags. Comments made in the public comment portion were overwhelmingly in support of LGBTQ students, advocating for their rights and protection.

Superintendent Abram Lucabaugh opened Tuesday’s board meeting with a speech.

“We need to start demonstrating tangible actions of support for these students,” said Lucabaugh. But he said that some of the “narratives” about initiatives targeting LGBTQ students “are not based in fact” and are “tearing us away from our mission.”

As for the removal of pride flags in Lenape Middle School, Lucabaugh said, “Classrooms absolutely need to be apolitical.” He said he doesn’t want to see pro-Trump flags, either. Lucabaugh added that new policies around the “delivery” of Human Growth and Development classes will be announced by early next week.

For many parents and students though, pride flags are not political moves, but classroom symbols of safety.

The accumulative actions taken by CBSD are raising eyebrows for leaders at ACLU Pennsylvania.

“We haven’t looked and done the legal analysis on each of those discrete actions, but when you take them all together, it’s hard not to conclude that this is a systemic assault on a protected group of students,” Walczak said. “That raises real concerns about whether the district is creating a hostile educational environment, which is illegal under federal anti-discrimination and civil rights laws,” he added.

Lenape’s new policy for certificates and awards mirrors a district-wide policy enacted in Pennridge School District, Bucks County. The policy said that students must receive permission from a parent or guardian to change their gender pronouns or names at all, even if students don’t want to tell their parents.

For many students, gaining parent permission can be stressful and even dangerous. According to a study published in the Journal of Adolescent Health, these kinds of barriers to gender affirmation lead to higher rates of suicide or depression among LGBTQ youth.

A climate of fear

Lenape Middle School students are fed up. Many are planning on ditching class this week in protest.

Protests are planned outside Lenape Middle School from Wednesday, May 11, to Friday, May 13, from 7 a.m. to 3 p.m. Parents plan on circling the school in their cars, honking in solidarity.

Students also created an Instagram account dedicated to Burgess, called @Jusice_for_Burgess, and a petition demanding his return, with over 3,500 signatures gathered so far.

One Lenape teacher, who wished to remain anonymous, said teachers are saddened by the loss of Burgess, who is admired by many of his colleagues. On Friday, after principal Saullo announced Burgess’ leave of absence, “teachers were wandering around the hallway in a daze, crying,” they said.

“Of all of my colleagues in this entire district. He is the colleague that I respect the most,” they said. “He is so strong and so focused on justice and doing the right thing, the honorable thing.” They added, “It’s not surprising that they would want to get rid of him because he’s outspoken for what’s right.” 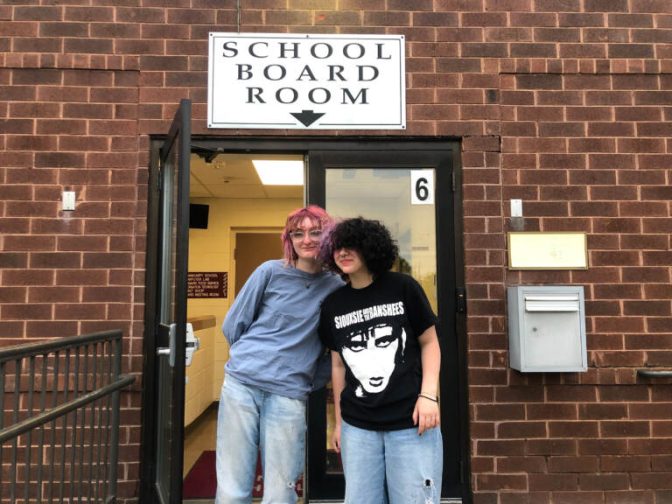 Julien Jones and Rowan Hopwood, eighth-graders in the district, are protesting Lenape’s new pronoun policy and the sudden absence of teacher Andrew Burgess.

Burgess, according to students and teachers, was a trusted confidant in a school where bullying is rampant.

Julien Jones, an eighth-grader at Lenape, had Burgess as a teacher.

“He was always who I went to, for anything. Like I stopped going to everyone,” said Jones, who says he experiences bullying on a daily basis.

“It’s just always very hostile,” he said. “I’ve had a kid go up to me and scream in my face in the hallway just out of nowhere. I’ve had people tell me that they’re going to assault me … I get called slurs, like repeatedly. I just feel hated. I don’t feel safe. I don’t want to go back to school.”

When Jones learned of Burgess’ apparent suspension, it felt like the door to bullying had been opened wider.

“I was like, ‘Wow, this is going to triple my bullying now because they know that they can get away with it.’ Because every time I go to anyone besides Mr. Burgess, nothing happens,” Jones said. 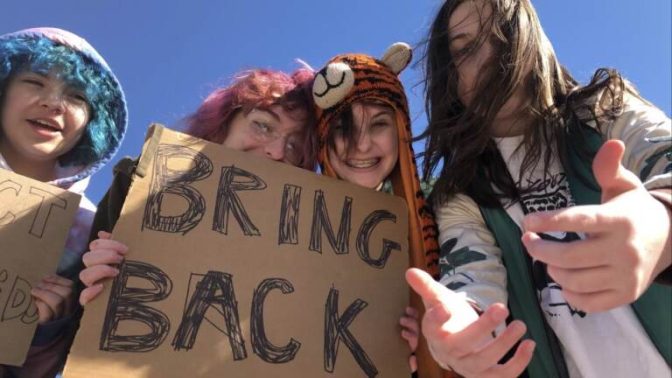 Students protested outside Lenape Middle School on Wednesday, May 11, after teacher Andrew Burgess was suddenly asked to leave.

Rowan Hopwood, another eighth-grade student in the district, plans to stand outside Lenape Middle School all day every day this week in protest of Burgess’ dismissal and Lenape’s new gender pronoun and name policy.

Hopwood already protested on Tuesday with other students. Hopwood attends a charter school now, but attended Lenape for two years prior. The group of students circled the school with pride flags, chanting “Bring back Burgess.”

A 🧵on Central Bucks School District (I never left): Lenape Middle School students and parents are protesting sudden changes that seem to target the LGBTQ+ community.

ACLU Pa. says it’s hard not to conclude that the pattern in CBSD is a “systemic assault” on LGBTQ+ students. pic.twitter.com/Hx5VexKxRX

Hopwood and Jones are worried about their friends who are not out to their parents.

Jones said they have friends who are planning on going by their deadname, to avoid a stressful situation with their parents.

“It’s just a bad situation to put them in,” said Jones. “And it is another reason why it’s just so obvious that they don’t care about us.”