Dog Patron called Bullet at an award ceremony for his owner, a sapper, in Kyiv, Ukraine, Sunday, May 8, 2022. 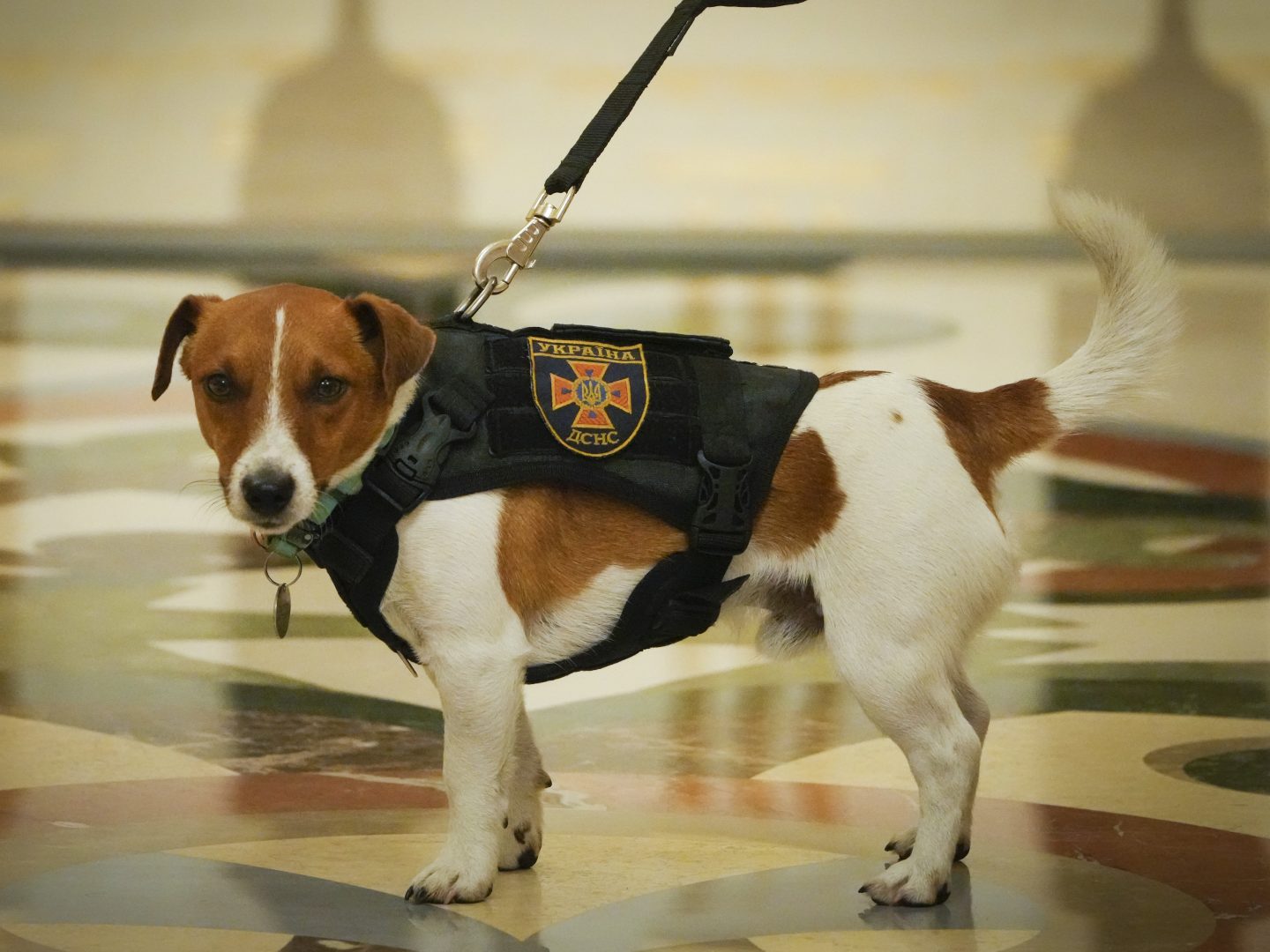 Dog Patron called Bullet at an award ceremony for his owner, a sapper, in Kyiv, Ukraine, Sunday, May 8, 2022.

Patron the bomb-sniffing dog — and his owner, Mykhailo Iliev of the Civil Protection Service— received a medal from Ukrainian President Volodymyr Zelenskyy during a news conference on Sunday, in recognition of their service to the country.

Patron, whose name means “ammo” in Ukrainian, is credited with detecting more than 200 undetonated explosive devices since the beginning of the war in late February, according to Reuters.

With his powerful snout and pint-sized protective vest, Patron has become a fixture of Ukraine’s official social media channels and an international symbol of patriotism. He’s even inspired an outpouring of fan art in the form of illustrations (ranging from poignant to tongue-in-cheek) and knit plushies. His official Instagram page has more than 220,000 followers.

Zelenskyy handed out the award at a news conference with Canadian Prime Minister Justin Trudeau in Kyiv, as Patron barked and wagged his tail enthusiastically. At one point, Trudeau laughed and pretended to check his pockets for treats.

Patron received his recognition. Among those who save the lives of 🇺🇦 every day are four-legged heroes. The most famous among them is Patron, a bomb-sniffing dog. In the presence of @JustinTrudeau, @ZelenskyyUa presented him an award “For Dedicated Work in the #UAarmy“. pic.twitter.com/mssSTlfIKW

In remarks later that day, Zelenskyy described Patron as “a small but very famous sapper,” or military engineer.
“A dog who helps clean our land from the traces of the occupiers, and who also helps teach children mine safety,” he said. “Due to the Russian invaders, this is now one of the most urgent tasks — to teach children to recognize and avoid explosive objects.”

The 2-year-old terrier was professionally trained by cynologists to showcase how dogs can be trained to perform specific tasks, but pivoted at the start of the war to learning how to sniff out mines, according to TODAY Parents.

Iliev — who is from Chernihiv and has been doing this type of work since 2014 — initially bought Patron from a work colleague as a pet for his son. Now the two work together to neutralize mines and missiles left by Russian forces.

Here’s how that works: Patron was trained to recognize the smell of gunpowder. When he smells it, he gives a signal to Iliev, who then works with his human teammates to find and defuse the devices.

Patron “gives rays of the sun, gives smiles and gives hope only for victory and peace on earth,” Iliev told TODAY, adding that Patron will work “as long as our people need it.”

When Patron isn’t sniffing out explosives, he’s out in the community doing charity work. That’s according to Ukraine’s Centre for Strategic Communications and Information Security, which shared picture of him greeting a child at a Kyiv hospital last month.

The work is tough, and evidently tiring — Belarusian opposition outlet NEXTA tweeted a now-viral photo of the tuckered-out pup asleep during a press briefing over the weekend.

The famous dog #Patron, who daily saves #Ukraine from the “gifts of the #Russian world”, fell asleep at a briefing with journalists.

It seems that we will not see anything nicer than this. pic.twitter.com/E44zZ8qJbA

But Patron still finds time to enjoy classic canine pursuits like playing with his friends and snacking on his favorite treats.

“Patron just loves cheese,” Iliev said. “He is a very active dog that likes to have a good run with other dogs and then, of course, sleep.”

In fact, according to a Google translation, the State Emergency Service quipped on Facebook that Patron enjoyed meeting Canada’s leader at Sunday’s ceremony, “even though Mr. Trudeau did not find a piece of Patron’s favorite cheese.”