Unable to get into the crowded school board meeting room, Central Bucks School District parents take shelter under a tent. 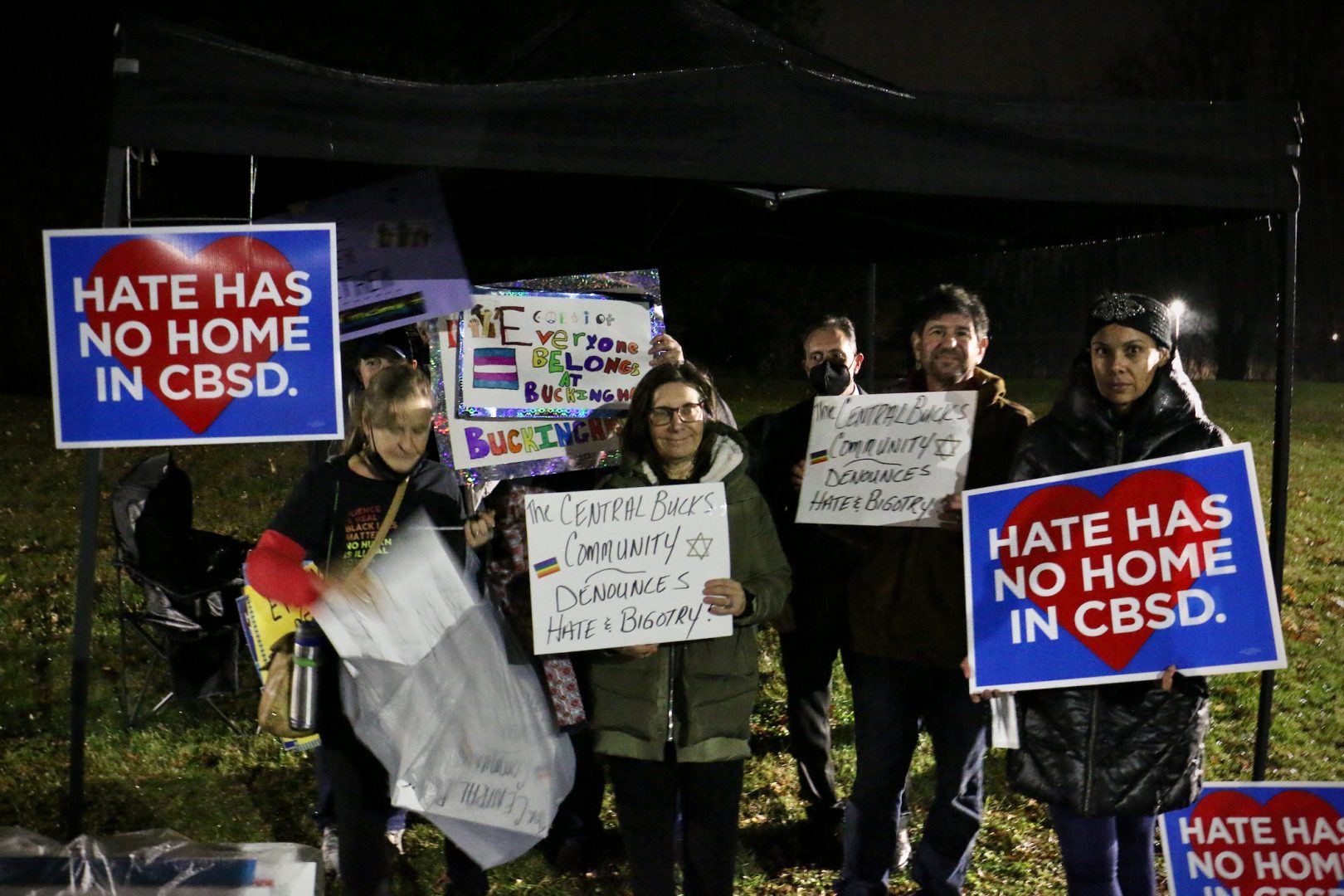 Unable to get into the crowded school board meeting room, Central Bucks School District parents take shelter under a tent.

Central Bucks School District administration directed school counselors to separate elementary students for classes about puberty, called “Human Growth and Development,” by the sex they were assigned at birth, and not their gender identities.

According to multiple school counselors who wished to remain anonymous, the decision to separate students by sex assigned at birth was delivered in a meeting on Tuesday, April 19. District administration including Alyssa Marton, director of pupil services, and assistant superintendents Charles Malone and Nadine Garvin, told school counselors that students who are gender-nonconforming or trans could access the Human Growth and Development classes by attending the classroom that corresponds to the student’s sex assigned at birth. They could also choose to watch a video on the content in the nurse’s office, watch a video at home, or opt out of the class entirely.

The HGD curriculum contains topics like adolescent physiological and emotional changes, and the human reproductive system.

Marton told one family of a nonbinary elementary school student that their child could not attend the classroom of their choosing for their Human Growth and Development class, and that the child had to go to the classroom that coincided with the sex they were assigned at birth, not their gender identity. The Human Growth and Development classes were then canceled for all elementary students at that school. 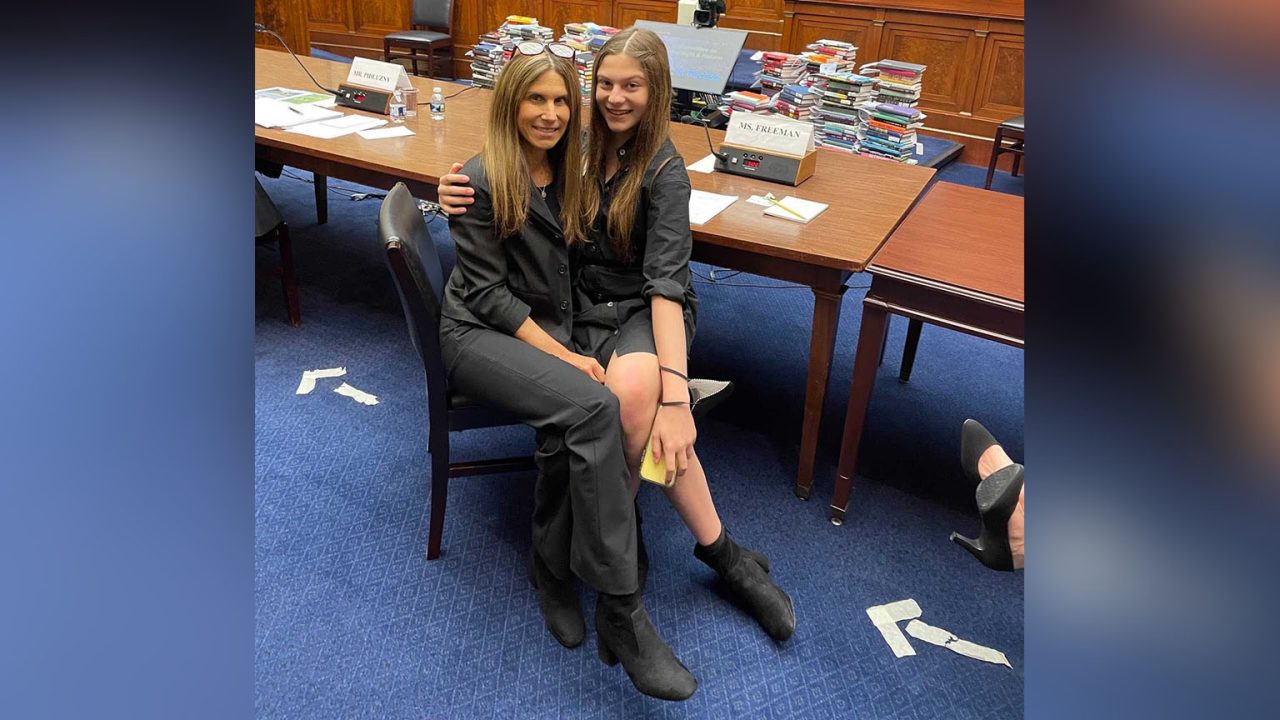 Mindy and Lily Freeman in April, 2022, when they spoke in front of congress against book censorship.

Since the meeting with school counselors, confusion and angst has ensued among teachers, staff, and parents.

According to counselors who wished to remain anonymous, the district put the remaining HGD classes on hold in the rest of CBSD elementary schools. Elementary school parents have also confirmed after conferring with their principals that HGD classes have been paused until further notice. Some parents were told their HGD classes were rescheduled to a later date.

A statement by the nonbinary child’s parents was released to WHYY News.

“The environment at our elementary school is not welcoming, inclusive or safe for gender-expansive children. It has become more hostile and vicious towards children who are simply trying to be authentic to their true feelings. The only school in CBSD that refused to allow a gender expansive child to attend the health classes was our elementary school. It should sadden us all that the only alternative was to eliminate the class for all students rather than allow a particular student to attend without bias.”

“While some teachers have worked very hard to be positive and supportive, the overall feeling in this particular building has become more and more difficult for gender-expansive children. To simply ask for a child to be referred to and called by their own/preferred pronouns has even been met with resistance.”

“The district’s refusal to create a policy on this subject is fostering discrimination against gender expansive students. Lack of policy also prevents students from having an equal opportunity of a safe, welcoming environment based on their administrators’ treatment and handling of gender expansive children. That in turn has led to a tremendous amount of stress and anxiety for our students and their families. Hatred and discrimination does not have a home in in CBSD and we will not back down and let it win.”

Central Bucks School District did not reply to WHYY News’ multiple requests for comment. In response to WHYY’s Right-to-Know request, the district said 30 days were required before releasing information.

The district’s directive has raised concerns from parents, students, community members, and district employees who say it’s transphobic, could out trans and nonbinary students, and could lead to more bullying. There’s also concerns it could cause gender dysphoria, which is the distress a person experiences as a result of a disconnect between their gender identity and their sex assigned at birth.

One school counselor who was in the April 19 meeting, who wished to remain anonymous, said they are concerned for LGBTQ students’ wellbeing.

“It’s our job to make [their lives] easier. It’s such a simple thing to do, to honor their gender identity. We’ve done it as a district and it has been fine and uneventful,” said the counselor.

The counselor said, in previous years, the district has not divided students based on the sex they were assigned at birth for HGD classes, and allowed them to attend the classroom they found best fit.

Before the district canceled or delayed the rest of elementary HGD classes this school year, two elementary schools with trans students already had their HGD classes, with no issues, according to the counselor.

Less than a week before the directive was made to counselors, the district canceled a training with the Childrens’ Hospital of Philadelphia Gender and Sexuality Development Clinic for student services staff, including nurses, school counselors, social workers, and psychologists, according to Deneen Dry, school nurse and CBSD Educational Support Professionals Association President.

The training was supposed to occur on Thursday, April 14, during a professional development day.

“As a nurse, I think we need this valuable training and would be appreciative if we could take part in any training offered,” Dry said.

The Central Bucks School District did not provide WHYY News a response when asked why they canceled the training. A CHOP representative said they could not provide the district’s reasoning for canceling.

According to Zaebst, ACLU PA is monitoring the situation and will “evaluate it as it develops.”

Beyond the potential legal ramifications, Zaebst said the policy violates the privacy and safety of trans students.

“So many trans youth are transitioning at a young age socially that they may have come into the school as their authentic selves,” Zaebst said. “And if they are suddenly required to participate in a class based on their sex assigned at birth, that could be outing them to all of their classmates who’ve known them for years as a boy or as a girl.”

Maura McInerney, legal director of the Education Law Center, said the directive is unlawful and is discrimination under precedents set by the U.S. Supreme Court.

In 2019, for instance, the Supreme Court upheld Boyertown Area School District’s policy that permitted transgender students to use restrooms and locker rooms that correspond with their gender identities.

According to school counselors, the district referenced the Supreme Court ruling in Bostock vs. Clayton County to support their decision. But McInerney said that doesn’t make sense.

The Bostock decision, she said, “held that dismissal of employees for being transgender or gay is sex-based discrimination under Title VII.”

“When we separate students based on their assumed gender for sex education, we’re reinforcing the notion that anatomy is equal to gender and there’s no difference between sex and gender. And this is denying the very identity of these transgender, nonbinary students,” McInerney said.

Zaebst pointed to the broader movement targeting trans kids in the United States, which has played out in Central Bucks. Urged by the group Woke Pennsylvania, an organization whose mission is to “reclaim our schools from activists promoting harmful agendas,” parents have been demanding the school board remove LGBTQ related books from school libraries, labeling them as “pornographic.”

“We’re seeing all around the country state legislatures and school districts treating trans kids as political footballs, trying to score points by enacting policies that prevent trans youth from being themselves and living their lives,” Zaebst said.

‘It affects all students’

Some community members say health classes shouldn’t be divided by sex or gender at all.

Lily Freeman is a trans woman who is a sophomore at Central Bucks High School East.

When she heard about the new directive from the district, she recollected on her elementary school experiences in HGD classes.

In 4th grade, she had to choose between going in the room for the boys or for the girls. At the time, she was not presenting as female in school and most of her peers were not aware of her true identity.  Though she knew she did not identify as a boy, because she only had two options, she chose the class for boys.

“I felt that I was being put into a box when I didn’t even know if I fit that box,” Freeman said.

Freeman said sitting in that classroom learning about the ways puberty impacts male bodies was scary and traumatizing, and she experienced feelings of gender dysphoria.

“Because I was like, that’s not me. And I felt like I was surrounded by people who weren’t me,” Freeman said.

After 4th grade, she opted out of the HGD classes for 5th and 6th grade because the school continued to separate students by gender, and she said she didn’t want to be put in a box. She sat in the library instead.

Sitting in the library while her classmates were learning, was further isolating, she said.

“And that’s important, too, because these classes should be a place for all kids, so they can ask questions and learn about their bodies,” Freeman said. “That kind of education is being taken away from kids.”

She hopes the district will consider not separating students based on gender for health and sex ed classes.

“It affects all students. It doesn’t just affect gender diverse kids,” Freeman said. “If everybody learns this topic together, then there wouldn’t be that kind of stigma surrounding these health lessons.

Heather Reynolds has a fourth grader in the district.

“I want them to understand what that might be like so they can be more empathetic,” Reynolds said. “Because with things you don’t know, there’s fear. And there shouldn’t be fear.”

Those notions are amplified by Daniel Rice, Executive Director of Answer at Rutgers University, an organization that trains teachers on sex education.

The best model for sex education, according to Rice, is to not separate students by gender at all, and “for all students to learn about human growth and development together. We all need to learn the same information,” Rice said.

Mindy Freeman, Lily’s mother, has been pushing back against dividing students based on gender for Human Growth and Development since Lily was in 4th grade.

She said it’s important for kids to “see themselves” in the classroom. Learning together and embracing differences isn’t about indoctrinating students into being something they are not, explained Mindy.

“The indoctrination, she said, “was putting Lily into the boy’s health class.”

Lily said elementary school years are precious for kids because they start thinking beyond gender binaries.