Temple, PA - March 2: A casket and pews with every other row marked off to encourage social distancing in the funeral home. At the Milkins Trymbiski Funeral Home on Kutztown Road in Temple, PA Tuesday morning March 2, 2021 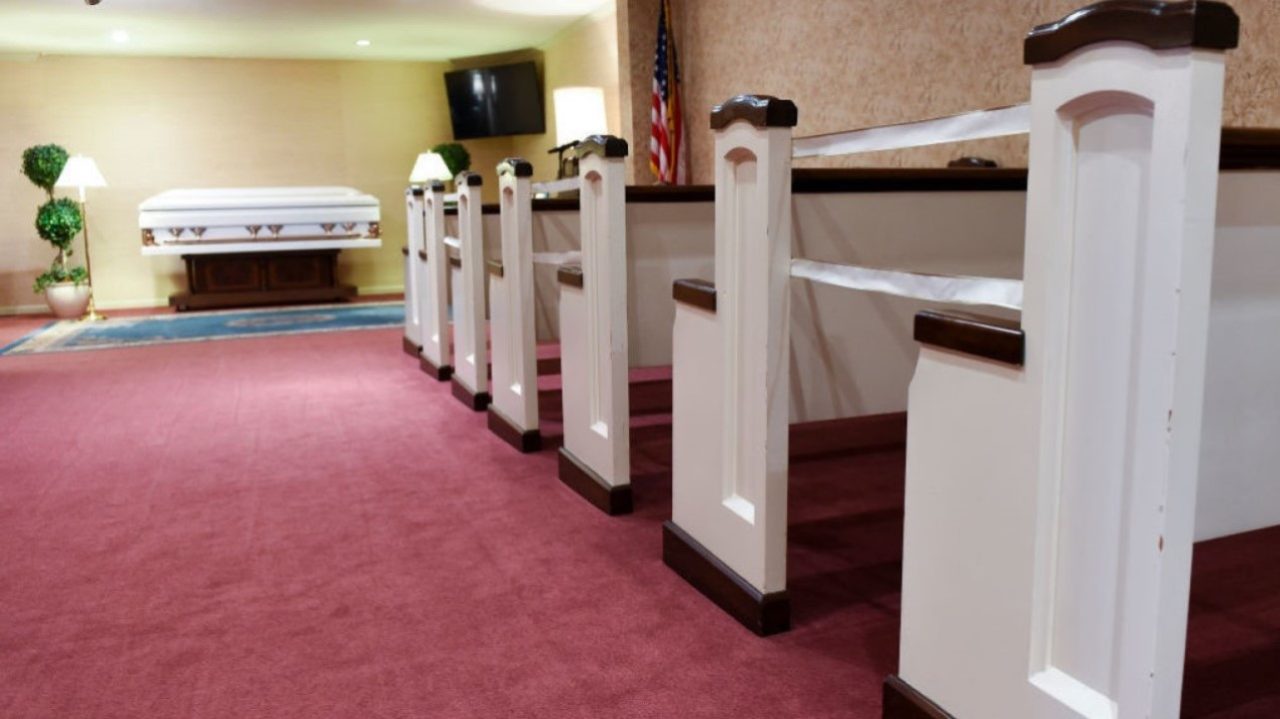 Temple, PA - March 2: A casket and pews with every other row marked off to encourage social distancing in the funeral home. At the Milkins Trymbiski Funeral Home on Kutztown Road in Temple, PA Tuesday morning March 2, 2021

On a humid August afternoon in 2020, two caskets – one silver, one white – sat by holes in the ground at a small, graveside service in the town of Travelers Rest, S.C.

The family had just lost a mom and dad, both to COVID.

“They died five days apart,” says Allison Leaver, who now lives in Maryland with her husband and kids.

When Leaver’s parents died that summer, it was a crushing tragedy. And there was no life insurance or burial policy to help with the expense.

“We just figured we were just going to have to put that on our credit cards and pay it off, and that’s how we were going to deal with that,” the public school teacher says with a laugh of resignation.

But then, in April of 2021, FEMA offered to reimburse funeral expenses — up to $9,000, which is roughly the average cost of a funeral. And it was retroactive.

“If this horrible thing had to happen, at least we weren’t going to be out the cash for it,” she says.

A year into the program, the federal government has paid more than $2 billion to cover funeral costs for COVID victims. More than 300,000 families have received reimbursement, averaging $6,500. But fewer than half of families have started applications.

Many surviving family members have run into challenges or still don’t know the money is available.

For those who know

FEMA launched a big call center, hiring 4,000 contractors in Denver. Survivors must call to initiate the process, as applications are not accepted online. FEMA received a million calls on the first day, leaving many waiting on hold.

Once Leaver talked to a representative, she started assembling the death certificates and receipts from the funeral home and cemetery. She uploaded them online — and heard nothing for months.

Eventually, she called and learned the receipts she submitted had different signatures — one from her husband, another from her sister. That was a problem. Even though it was a joint funeral, in order to get the full amount per parent, the government required separate receipts. Leaver says she was frustrated, but determined to get it done “come hell or high water.” Plus, she says, it was summer break, and she had time.

But many haven’t applied or don’t have time.

Clerical challenges have discouraged some participation, especially for those whose loved ones died early in the pandemic, says Jaclyn Rothenberg, FEMA’s chief spokesperson.

“Some people with death certificates didn’t necessarily have COVID listed as the cause of death,” she says. “We do have a responsibility to our taxpayer stewards to make sure that that is, in fact, the cause.”

Rothenberg says FEMA is trying to work with everyone. Even though the agency has spent the $2 billion initially budgeted, she says there’s a new pot of stimulus funding from the American Rescue Plan Act.

For those who don’t know

NPR analyzed FEMA’s data compared to official COVID fatalities through March 15, 2022. Washington, D.C., led the nation with applications for 77% of deaths. States clustered in the South had the highest participation rate in the program, with North Carolina approaching applications for two-thirds of deaths. Other states remain well below a 50% participation rate. In Oregon and Washington, less than one in three deaths resulted in an application.

It’s generally not a question of eligibility. There are no income limits, and life insurance does not preclude participation. And there is still no deadline. One of the few disqualifiers (detailed here) is if a funeral was pre-paid.

“We need people to continue helping us get the word out,” Rothenberg says. “We know we have more work to do.”

FEMA is launching an outreach campaign to promote the program since there’s plenty of money left. The agency is focusing on the populous states of California, New York, Pennsylvania and Texas, and efforts are targeting vulnerable populations.

The government is also leaning on community groups connected to those who most need to know about the money.

COVID Survivors for Change, founded by Chris Kocher, has been helping people navigate the process, including through a Facebook webinar.

“We were able to connect people to some of the survivors that had been through that process already just to help them walk through it,” he says.

Many just need someone to complete the application for them.

Stephanie Smith of Carlisle, Ky., lost her father to COVID. Her mother, who was 83 at the time, had no chance.

At a minimum, applying requires scanning or faxing.

“She probably would not have attempted to do it because the whole process would have been overwhelming for her,” she says.

But Smith was able to jump through the hoops without much trouble. And $9,000, she says, is enough to make life considerably easier as her mom adjusts to being a COVID widow.