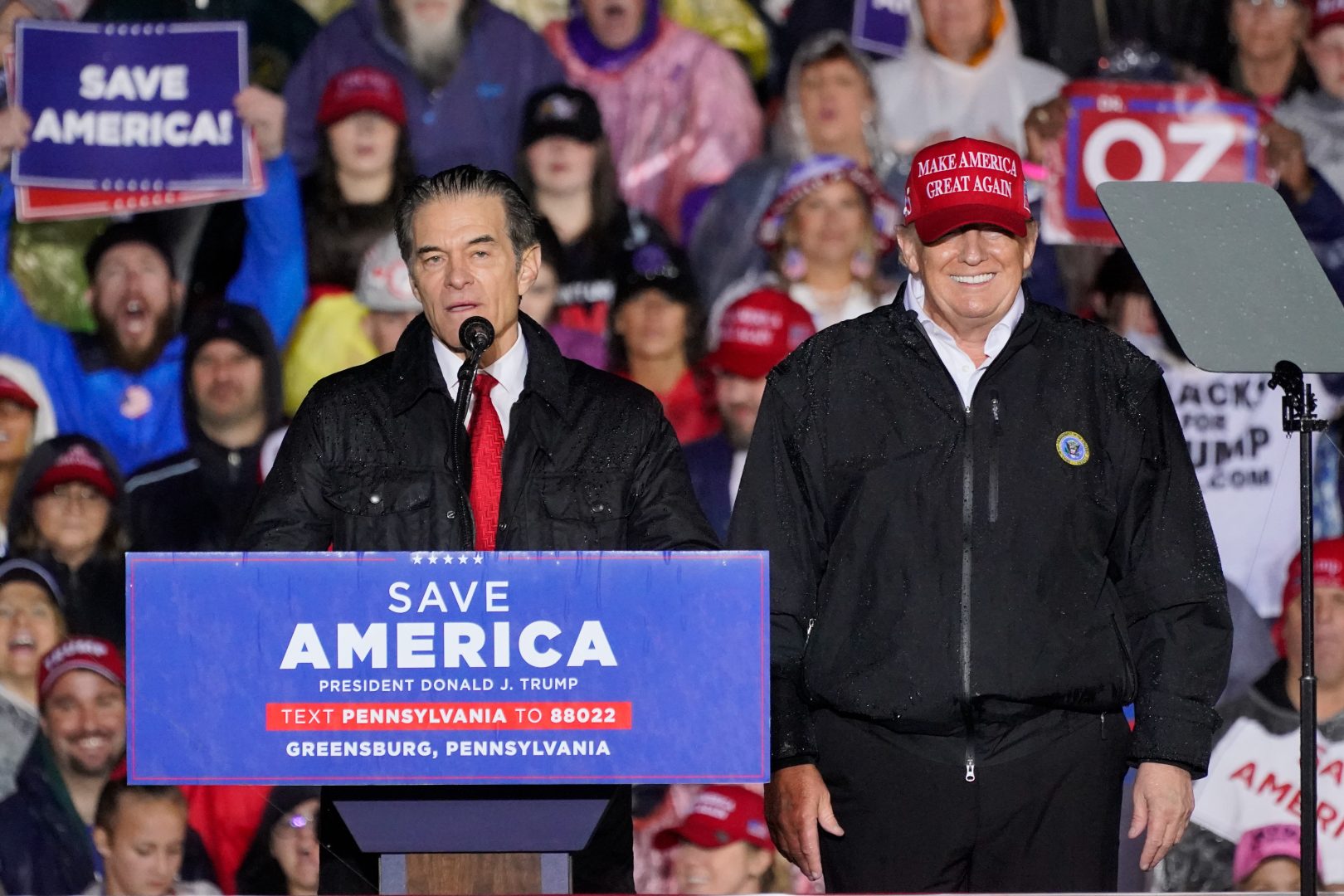 At least in theory, former President Donald Trump came to Greensburg Friday night to boost his endorsed candidate for U.S. Senate, Dr. Mehmet Oz, in the May 17 Republican primary.

But thousands of supporters — who endured a heavy rain for hours before Trump at the Westmoreland Fairgrounds — heard little about Oz Friday evening.

In a speech that lasted more than an hour and a quarter, Trump spoke for only a few minutes about the TV celebrity doctor, who Trump hailed as “the man who has by far the best chance to win Pennsylvania’s U.S. Senate race this fall. … He’s on that screen, he’s in the bedrooms of all those women.”

Trump’s remarks on the Senate race didn’t come until 45 minutes into the speech, by which time he had already spoken at similar length about how local golfing legend Arnold Palmer financed the acquisition of a private airplane.

Trump described McCormick as a “liberal Wall Street Republican,” who he mocked precisely for his efforts to curry Trump’s favor.

“If anybody was within 200 miles of me, he hired them,” Trump said. “He did want my endorsement very badly, but I couldn’t do it. ”

Trump made clear that, in his view, McCormick’s chief sin was in assigning some responsibility for the Jan. 6, 2020 insurrection to Trump.

As Trump recalled it, “David came out very strongly against me on numerous occasions — this is before he was going to run, all of the sudden he said, ‘Boy, I like this guy a lot” — including with respect to the disinformation spread about Jan. 6.

McCormick, Trump concluded, “will quickly fold to the fake news … and immediately to the radical-left Democrats.” While Oz, he said, would “fight to the end, and he will always have your back.”

But crowd reaction to Oz appeared decidedly mixed, and Trump offered little to Republicans who have misgivings about Oz’s commitment to Trumpism.

Trump also didn’t make an endorsement in the state’s wide-open governor’s race, as some expected. Nor did he address the leaked draft of a U.S. Supreme Court decision that would overturn the Constitutional right to an abortion promised 50 years ago in the decision Roe v. Wade. Trump’s silence was notable because such a ruling, if final, would be nigh-impossible without the three justices he put on the court.

It was one of the few boasts he didn’t make in a speech that was a Trumpian melange of old boasts and grievances: He took shots at 2016 opponent Hillary Clinton and compared his record on immigration, foreign policy and economic issues to that of President Joe Biden. He revisited old false claims about fraud in the 2020 election, and he suggested that he would run in 2024.

Trump is widely expected to seek the White House again, and his appeal to some voters appeared undiminished Friday.

Hundreds of cars bearing Trump flags, signs and stickers were parked in a soggy field next to the fairgrounds shortly after 1 p.m. Friday. Some people slept in their cars while others headed into the venue early to ensure they got a spot for the event, which officially began at 3 p.m.

Doug Davis from Parker, Armstrong County, said the rally offered the first chance he has had to see Trump since the 2020 election. According to Davis, Trump’s endorsement of Oz carries a lot of weight.
“If Trump says [Oz is] my candidate, he’s my candidate,” he said. “Whoever [Trump] says is my man or woman.”

Others were unsure if Oz will earn their vote. Sue Garris from Blairsville, Indiana County, said she is considering voting for GOP pundit Kathy Barnette. “I’m still debating, still deciding,” she added.

Kaylee Miner from Greensburg said she’s also still unsure who she will support in the primary. Both women said Trump’s planned appearance drew them to the rally.

“We love Trump. We try to support him in any way we can,” said Miner.

Lou Ann McKlveen from Ligonier said she would pay close attention to Oz’s speech Friday to make up her mind, but she was more focused on hearing from the former president.

“We want to see what Oz has to say, and we want to hear that President Trump’s running the next term,” she said. McKlveen criticized Oz’s past statements about key issues and his relationships with celebrities.

When asked about the U.S. Supreme Court draft opinion on Roe v. that was leaked Monday, many rally-goers took issue with the occurrence of the leak itself rather than the content of the opinion.

“I don’t think it should have come out like it did,” said McKlveen. She said she worries the leak puts political pressure on the Supreme Court.

“It should go back to the states,” said Garris. “That’s how it always should’ve been. I think that it was ruled unfairly in the first place.”

“The Supreme Court does not have the right to make a decision about abortion. The states do,” he said.

Garris said she doesn’t support a total ban on abortion. But she said she hopes states such as Pennsylvania can place stricter limits on when abortions are permitted, citing rape and incest as examples of such exceptions.

“Not a total ban,” she said. “[But] I think there are certain limitations.”