FILE - In this April 1, 2022 photo combination shown from top left are Lou Barletta, Pennsylvania state Sen. Doug Mastriano, R-Franklin, Bill McSwain and David White at a forum for Republican candidates for governor of Pennsylvania at the Pennsylvania Leadership Conference in Camp Hill, Pa. All four leading Republicans in Pennsylvania's governor's race have vowed to ban abortion if given the chance. (AP Photo/Matt Rourke, File)

Abortion rights may rest on governor’s races in some states 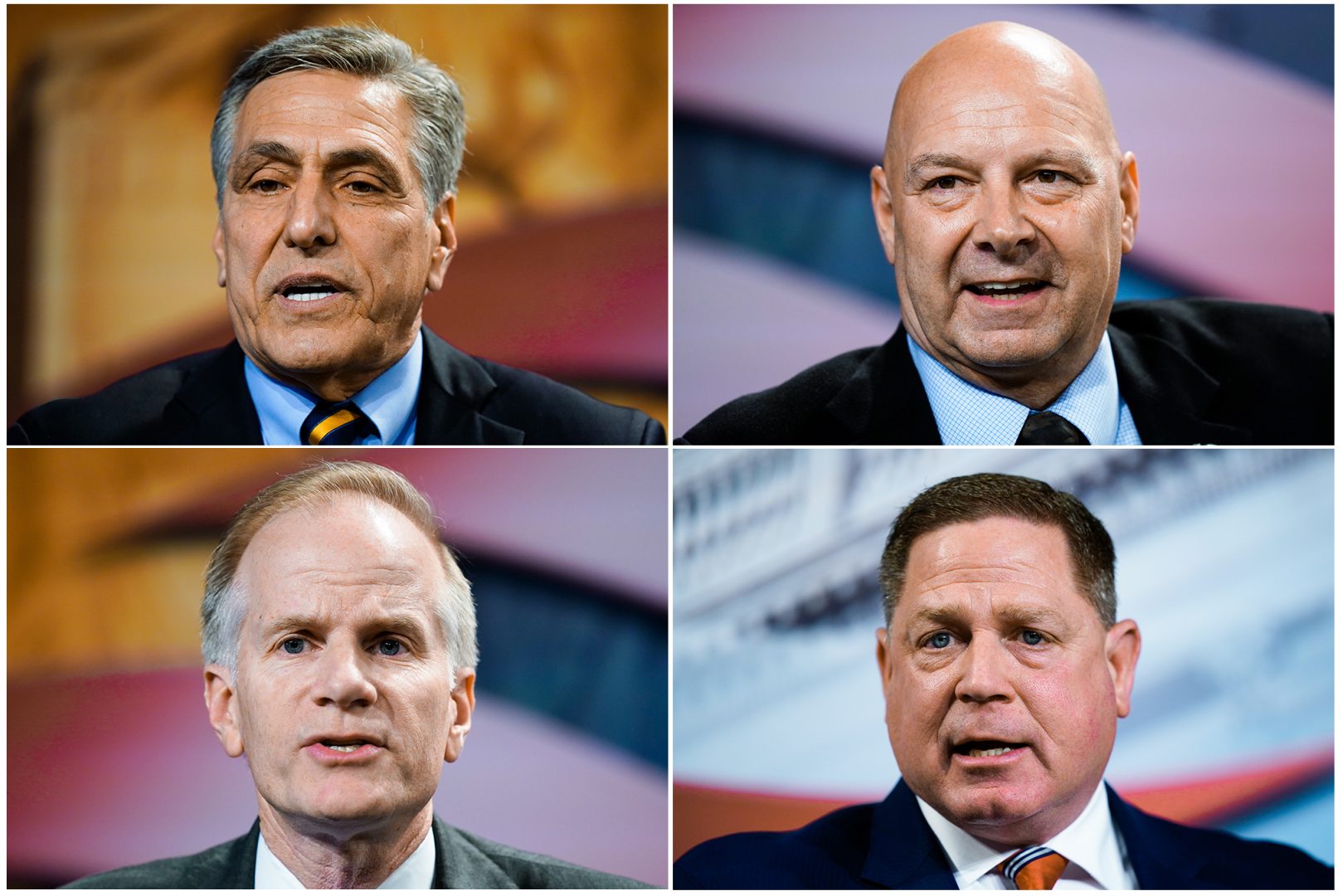 FILE - In this April 1, 2022 photo combination shown from top left are Lou Barletta, Pennsylvania state Sen. Doug Mastriano, R-Franklin, Bill McSwain and David White at a forum for Republican candidates for governor of Pennsylvania at the Pennsylvania Leadership Conference in Camp Hill, Pa. All four leading Republicans in Pennsylvania's governor's race have vowed to ban abortion if given the chance. (AP Photo/Matt Rourke, File)

(Harrisburg) — All four leading Republicans in Pennsylvania’s governor’s race have vowed to ban abortion if given the chance.

In Georgia, one top Republican candidate for governor wants to outlaw all abortions. The sitting Republican governor is backed by the anti-abortion lobby, but refuses to clarify his position. And in Michigan, all but one of the five leading Republicans running for governor oppose abortion even in cases of rape or incest.

The fight for Congress often dominates midterm elections, but the revelation this week that the Supreme Court may soon overturn its landmark Roe v. Wade decision has thrust candidates for governor — and their positions on abortion — into the forefront of the 2022 campaign. Some states, including Pennsylvania and Georgia, have primary elections this month, but the ultimate fight won’t be decided until the November general election.

In a handful of battleground states with Republican-controlled state legislatures, every GOP candidate for governor supports severe abortion restrictions, if not a complete ban with no exceptions. That’s prompting urgent warnings from Democrats that women’s access to abortion in some states may rest almost entirely on which party wins the governor’s race this fall.

“This is an issue that is now front and center in this governor’s race,” said Pennsylvania Attorney General Josh Shapiro, his state’s presumed Democratic nominee for governor. “The battle will be in the states.”

Thirteen deep-red states have so-called “trigger laws” that would ban abortion almost immediately if Roe is overturned, but the future of abortion access is less certain across several other more moderate states with Republican-controlled legislatures: Arizona, Georgia, Florida, Michigan, Ohio, Texas and Wisconsin, among them.

In almost every case, GOP legislatures have already approved restrictive abortion laws, including so-called “heartbeat” bills that would outlaw abortions before most women know they’re pregnant. Some legislation is tied up in the courts, while others have yet to move through Republican legislatures. But if Roe falls, such laws — or more restrictive bans — could only be stopped by a veto from a Democratic governor or Democrat-backed court challenge, if at all.

Some states, including Michigan, Wisconsin and Texas, have decades-old abortion bans predating Roe that would presumably take effect almost immediately after a formal Supreme Court reversal of the case. But even in those states, Democratic governors would have an opportunity to fight the change in their state courts.

That’s what Michigan’s Democratic Gov. Gretchen Whitmer is doing as she prepares for a challenging reelection this fall.

Anticipating that Roe would be overturned or weakened, Whitmer asked the Michigan Supreme Court last month to declare a state constitutional right to abortion and to strike down a near-total abortion ban that would go back into effect if Roe is overruled. The law, which dates to the 1800s, has an exception when the woman’s life is at risk, but not for cases of rape and incest.

“I’m using every tool at my disposal. I’m going to fight like hell to protect this right for women in the state of Michigan,” Whitmer said this week. “Regardless of what happens with SCOTUS, we have an opportunity in Michigan.”

The situation is different in Pennsylvania and Georgia, where there is no outright ban on the books, but Republican candidates for governor have indicated they would support a full ban if given the chance. Most refused to clarify their positions in recent days when asked directly by The Associated Press.

Pennsylvania law currently allows abortions during the first 24 weeks of pregnancy. But all four leading Republican candidates for governor have told the Pro-Life Coalition of Pennsylvania, in questionnaire responses, that they support “legal protection for all pre-born children from abortion” — in other words, banning an abortion of any diagnosed pregnancy, according to Mike McMonagle, the organization’s president.

Only White agreed to discuss his position in an AP interview this week. The others declined interview requests and didn’t answer specific written questions.

White said he would sign legislation banning all abortions with no exceptions for rape, incest or the life of the mother if given the chance. He noted that he’s ninth of 14 children from a Catholic family in which his parents taught him the “blessing of every child that comes into this world.”

In a televised debate last week, Mastriano said he supports banning abortion from conception, with no exceptions. He called abortion “the No. 1 issue” and pointed to the “heartbeat” bill that he has sponsored, which effectively bans abortion at six weeks.

Anticipating that Mastriano may emerge from the GOP’s May 17 primary election, Shapiro has began running attack ads against the Republican state senator this week highlighting his plans to “outlaw abortion.”

“They are wildly out of touch with where Pennsylvanians are,” Shaprio said in an interview of his would-be Republican challengers. “This issue boils down to whether or not we’re going to build a Pennsylvania where freedom is respected.”

In 2020, AP VoteCast found that 69% of voters in the presidential election said the Supreme Court should leave the Roe v. Wade decision as is; just 29% said the court should overturn the decision. In general, AP-NORC polling finds a majority of the public favors abortion being legal in most or all cases.

In Georgia, Democrat Stacey Abrams will face the winner of the state’s May 24 GOP primary, which pits incumbent Republican Gov. Brian Kemp against the Donald Trump-backed former Sen. David Perdue.

Kemp has declined to clarify his position on abortion in recent days. His office ignored direct questions asking whether he would support a complete abortion ban. An anti-abortion group that has endorsed Kemp rallied Friday to celebrate a possible Roe reversal. Speakers vowed to defend Georgia’s ban on abortions after fetal cardiac activity is detected. Tied up in courts now, it could take effect with a Supreme Court ruling.

Perdue wants Kemp to call for a special legislative session to approve an abortion ban if the Supreme Court officially overturns Roe, a ruling expected in late June or early July.

“Georgia voters deserve to know where their governor stands on this issue,” Perdue said on Thursday. “You are either going to fight for the sanctity of life or you’re not.”

On the Democratic side, Abrams touted herself as a defender of abortion rights in a speech this week to Emily’s List, a political action committee that donates to Democratic women candidates who support abortion rights.

“The abomination of that leaked opinion is coming to find every one of us, and we’ve got to be ready to fight back,” Abrams said, according to a recording provided by her campaign. “This is about our dignity and our freedom. This is about our health and our welfare. This is about our future and our lives, and we have the right to be angry.”

The issue could help Abrams — and Democrats in other states — win more votes among college educated white voters, who have been the most frequent swing voters in recent years.

Like a growing number of Democratic candidates elsewhere, Abrams also warned that a Supreme Court that overturns Roe v. Wade could threaten other precedents, including Griswold v. Connecticut, a 1965 decision that struck down restrictions on contraception, and Brown v. Board of Education, the 1954 decision that outlawed racial segregation in schools.

“This is a question of whether equality in America depends on geography and zip code and DNA,” Abrams said.