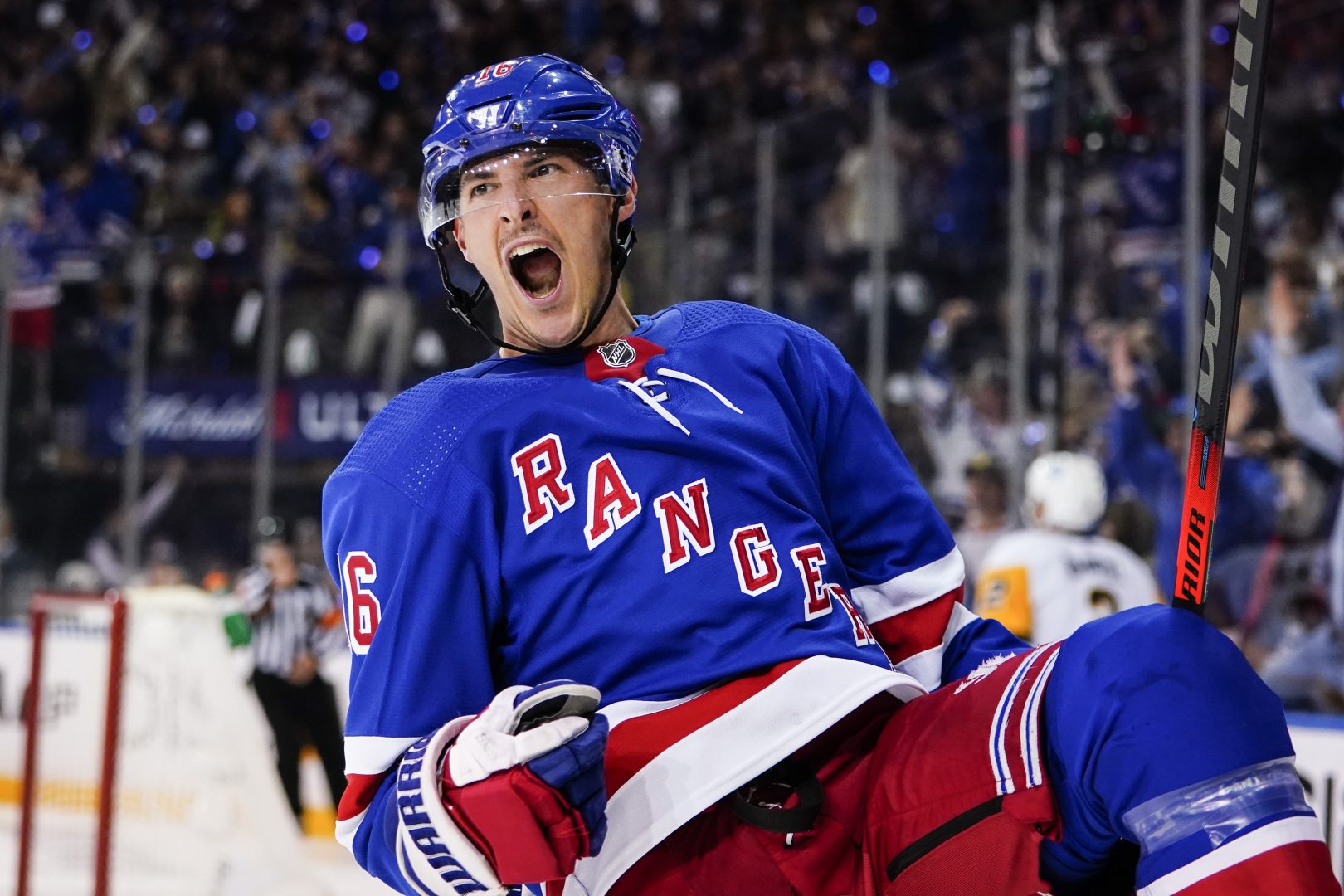 (New York)  —  New York coach Gerard Gallant was confident the Rangers would bounce back from a tough loss in the marathon series opener, and they did just that.

Artemi Panarin and Frank Vatrano each had a goal and two assists and the Rangers beat the Pittsburgh Penguins 5-2 in Game 2 on Thursday night to even the best-of-seven first-round series.

“It’s an 82-game regular season and we’ve done it all regular season long,” Gallant said. “We’ve got a talented hockey club and when we want to play real good hockey, sound hockey we’re a good team.”

Sidney Crosby had a goal and an assist, and Jake Guentzel also scored for the Penguins. Louis Domingue, getting the start after replacing the injured Casey DeSmith in the second overtime of Game 1, finished with 34 saves.

“It’s a hard-fought game, we can take a lot of positives,” Pittsburgh coach Mike Sullivan said. “When we were in our end zone I thought we defended hard. We had some looks in the offensive zone. One area we need to improve and get better is special teams, on both sides.”

Game 3 is Saturday night in Pittsburgh.

With the Rangers leading 3-2 after 40 minutes, the Penguins came out strong in the third period with the first nine shots on goal. Shesterkin stopped them all.

Panarin then extended the lead to 4-2 when his centering pass from beyond the goal line deflected off Penguins defenseman Mike Matheson and past Domingue at 8:02.

“It was for (Jacob) Trouba, I was trying to get the pass to him,” Panarin said through a translator. “It hit the skate of the opposing player.”

Vatrano gave the Rangers a three-goal lead when he got around Matheson in the right circle, skated in and beat Domingue inside the right post at 9:49.

Shesterkin was down on the ice for several minutes following a collision with Pittsburgh’s Jeff Carter as the goalie was trying to get back in position from behind the net with about two minutes left.

The Rangers took a 2-1 lead during a power play early in the second period when Adam Fox’s slap shot through traffic was deflected by Strome in front at 2:59.

Minutes later, the Penguins had an odd-man rush but Bryan Rust fired a shot wide off the end boards, and Crosby’s sharp-angle attempt from the left side on the rebound was kicked aside by Shesterkin. That got the Madison Square Garden crowd, roaring since Strome’s go-ahead goal, to break out in chants of “I-gor! I-gor!”

Kreider pushed the Rangers’ lead to 3-1 when he deflected Frank Vatrano’s point shot past Domingue for his second of the series at 7:54.

Crosby pulled the Penguins within one on a rush as he scored from the middle on the rebound of Rust’s backhander with 1:26 left in the middle period.

“You don’t want to get down two, we’ve done that a couple of times now.” Crosby said. “It’s not something we want to make a habit of. We get that late one and we had some really good chances early in the third and didn’t convert, and they got a bounce. That’s what it came down to.”

The Rangers outshot the Penguins 14-11 in a fast-paced and physical first period.

Copp got the Rangers on the scoreboard first as he got a pass from Panarin and scored from the inside edge of the right circle at 6:50. It was his second goal of the series.

Guentzel tied it with his third of the series as he fired a slap shot off the rebound of a shot by Marcus Pettersson past Shesterkin at 8:52.

“Every time we seemed to get some momentum going, we gave it back to them and we can’t keep doing that,” Gallant said. “We have to play better, stronger hockey in our D zone.”