Dariya Medynska (center) gathers with other members of the Voloshky Ukrainian dance ensemble before the International Spring Festival at North Penn High School in Lansdale, Pennsylvania on April 23, 2022. (Photo by Rachel Wisniewski for NPR)

A Ukrainian dance troupe in the U.S. fights disinformation, one high kick at a time 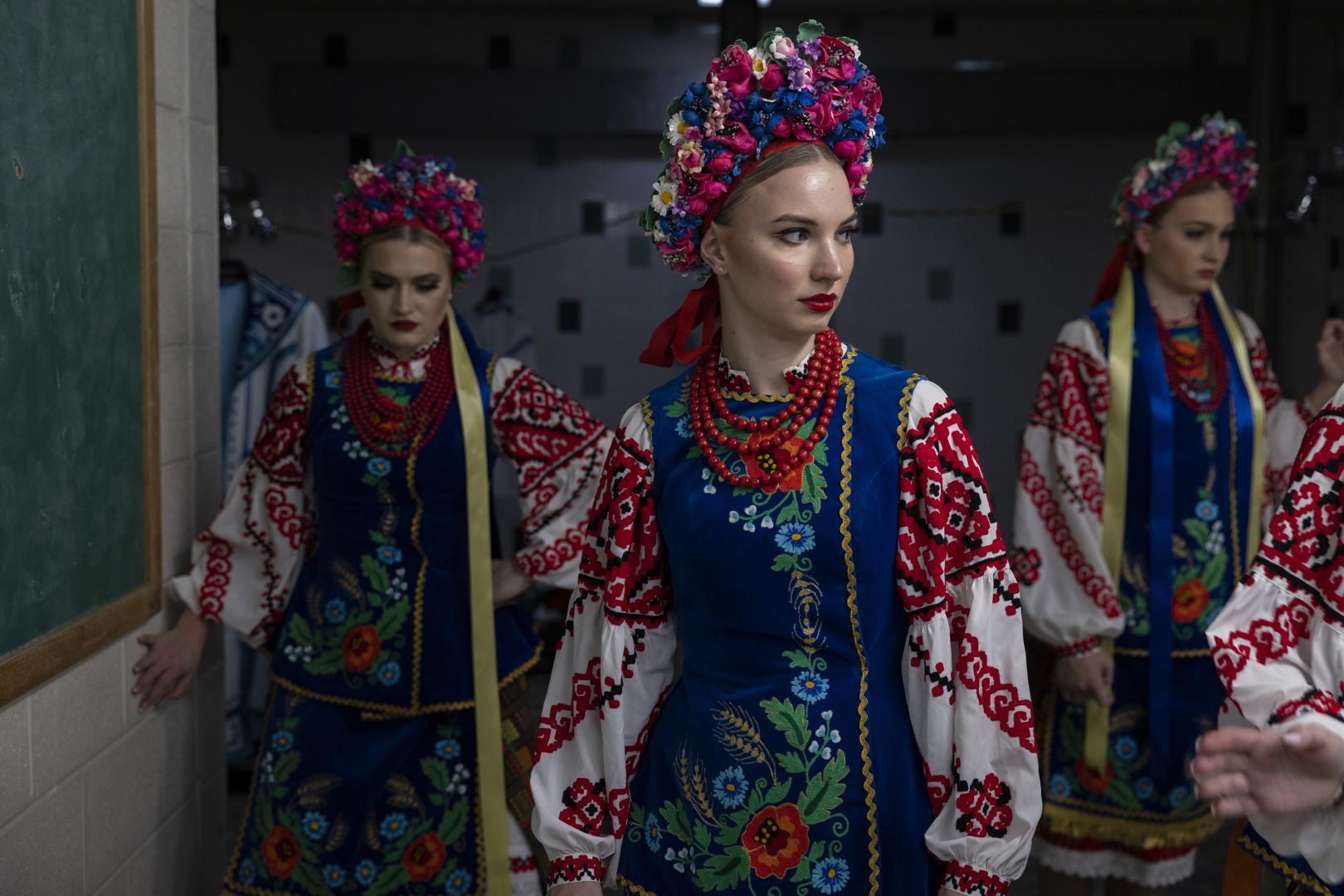 Dariya Medynska (center) gathers with other members of the Voloshky Ukrainian dance ensemble before the International Spring Festival at North Penn High School in Lansdale, Pennsylvania on April 23, 2022. (Photo by Rachel Wisniewski for NPR)

(Philadelphia) — After a pandemic hiatus, the Voloshky Ukrainian Dance Ensemble is a little bit rusty.

A few times a week, around two dozen semi-professional dancers run through choreography in the basement of the Ukrainian Educational and Cultural Center in suburban Philadelphia.

Among their ranks are engineers, designers and students, brought together by common heritage. One that is now under attack.

“[Russia is] trying to rewrite our history and it’s our time to say ‘no.’ We’re fighting back,” said dancer Maria Molyashcha.

Members of the Voloshky Ukrainian dance ensemble rehearse at the Ukrainian Educational and Cultural Center in Jenkintown, Pennsylvania.

An estimated 57,000 people born in Ukraine and their descendants call the Philadelphia area home, making this the second largest Ukrainian community in the United States, according to Census data.

Since the Russian invasion, this diaspora has kicked into high gear: collecting donations, lobbying the federal government to send arms, and educating an American public suddenly focused on their homeland.

The Ensemble, which turns 50 this year, sees its role in combating Russian aggression as diplomacy through dance, teaching U.S. audiences about Ukrainian history and culture.

Choreographer and executive director Taras Lewyckyj, 59, has been studying Ukrainian dance since he was around 4-years-old.

“It’s a very catchy way of dancing. It’s kind of like breakdancing,” he said, particularly the hopak, a folk dance said to have evolved from fighting moves performed by the Cossacks.

Born in Philadelphia to Ukrainian parents, Lewyckyj grew up speaking Ukrainian and studying the history and culture of his ancestral homeland.

“I have two sisters and a brother. If father came home and we were speaking English, we would have to write what he heard [in Ukrainian] 50 times on a piece of paper,” he said.

While he used to chafe at such strict rules, Lewyckyj eventually came to see the U.S. Ukrainian community as “safety deposit box” for a unique culture that has been under attack for centuries.

“My father’s father was shot in front of the family,” said Lewyckyj, targeted for promoting Ukrainian language and culture, which was seen as a threat to Soviet control. He sees the same kind of purge happening in Ukraine now, following Vladimir Putin’s insistence that Ukraine and Russia are “one people.”

Some in the troupe were born in Ukraine themselves, so the war feels even more personal.

Members of the Voloshky dance ensemble get dressed and practice thier routine at the locker room at Penn High School.

Dancer Khristina Maria Babiychuk, a 27-year-old engineer originally from western Ukraine, moved to the U.S. as a teenager. “After this [war] started, we basically don’t have real sleep,” she said.

Her mom recently returned to Ukraine, bringing military supplies with her. “For three people, they had like 90 suitcases for bulletproof vests and helmets, because this is something that cannot be shipped,” said Babiychuk. Her grandfather and uncle still live in Ukraine.

In Philadelphia, Ukrainian and Russian immigrants share many of the same spaces. The dancers described family members’ tense moments at work, and hearing anti-Ukrainian independence slurs.

“Even here in the U.S, when people have access to all the streams of information, people still choose to believe [Russian propaganda],” said dancer Dariya Medynska.

She said the Ensemble hopes they can counter disinformation by showing Ukraine in a positive light.

This year’s choreography also highlights the subversive side of Ukrainian dancing. Many pieces in the group’s repertoire involve characters acting out a story that seems to be about one thing, but is really about Russian oppression during tsarist or Communist times.

“Those are really great to put on right now, to show the chronic nature of this cultural identity theft,” said Lewyckyj.

A few weeks later, the Voloshky Dance Ensemble got ready to perform at an International Spring Festival, held at a local high school. Hundreds of people roamed around the gymnasium or sat in front of the stage on folding chairs.

The Voloshky dancers assembled early in the locker room, steaming their costumes and practicing their moves.

When it was their turn, the Ensemble started with some lighter pieces, welcoming the audience and honoring springtime. Then, Lewyckyj introduced a political satire called The Puppet Dance.

In it, a dancer dressed in a Russian fur hat tries to come between a Ukrainian couple. It ends with them kicking him in the behind, and the Russian tumbling over.

“We can only hope for happy endings like that. And you can probably see why that dance was banned from the Soviet Union,” Lewyckyj told the audience.

For a finale, the group always performs the hopak, with its acrobatic moves inspired by fighting. One man did an airborne split. Another spun on his head.

This time, the show ended on a chant that has become the battle cry for an independent Ukraine.

Lewyckyj called out in Ukrainian, “Glory to Ukraine!”

The crowd responded, “Glory to the heroes!”