From left in back row, Rep. Lee James (R-Venango) and Rep. Joe Cerisi (D-Montgomery) take a tap-dancing lesson while rallying on April 26 in Harrisburg for their bill aimed at streamlining the dance teacher certification process. 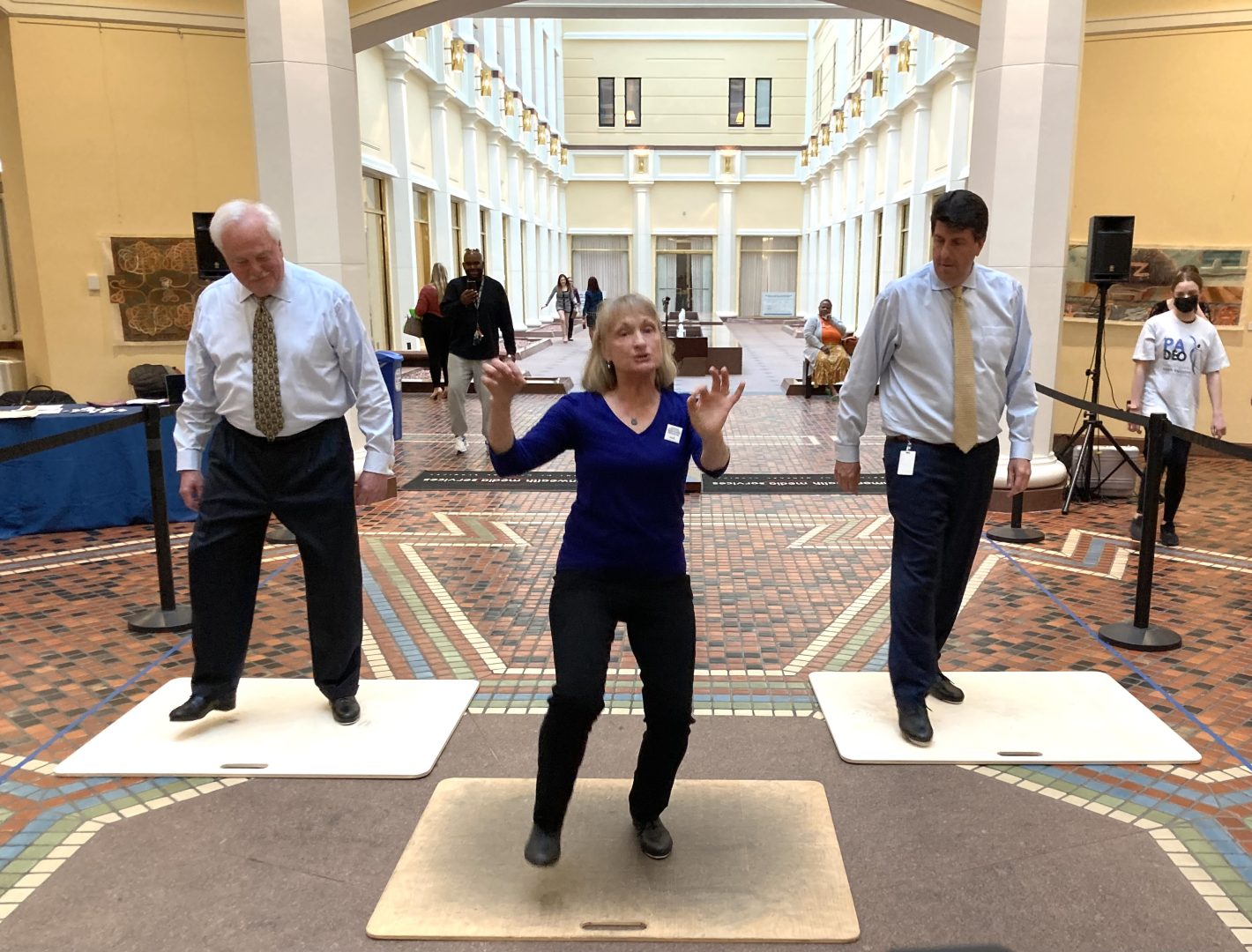 From left in back row, Rep. Lee James (R-Venango) and Rep. Joe Cerisi (D-Montgomery) take a tap-dancing lesson while rallying on April 26 in Harrisburg for their bill aimed at streamlining the dance teacher certification process.

(Harrisburg) – Pennsylvania dance teachers say the state’s certification process for their field needs to be streamlined. Hoping to drive that point home, a teacher advocacy group got creative at a rally in Harrisburg Tuesday.

They convinced two state lawmakers, clad in suits, to lace up a pair of tap shoes and take lessons in how to click their heels in time. Those lawmakers are drafting a bill to give dance teachers a clearer way to get state-certified.

Rep. Joe Cerisi (D-Montgomery) said he and Rep. Lee James (R-Venango) agreed to bust a few moves in the hopes of convincing fellow lawmakers to back their effort. Cerisi added they attracted a few co-sponsors for their soon-to-be-introduced bill with the stunt.

“I’ve never been able to tap dance,” Cerisi said. “So it really brings light to the issue. We’re willing to tap-dance to get our colleagues to see that this is an easy bill.”

The group behind the push for a change is Pennsylvania’s Dance Education Organization, or PADEO. Board President Miriam Giguere argued the Keystone State is struggling to attract teachers to its schoolroom dance floors because of a complicated, “burdensome” certification process.

The state Department of Education lists dance as among the courses that K-12 students can take to satisfy arts requirements. But the agency also requires educators that want to teach those classes to be certified in fields that aren’t directly related to dance, like Health and Physical Education or Vocational Dance. The Department of Education offers an optional Creative Movement Endorsement for teachers that are already certified.

“We are losing talented dance educators who move out of state, so they can study for the career without having to do an internship as an athletic coach if they take the P.E. route or be supervised in their student teaching by an auto shop teacher if they take the vocational education route,” Giguere added.

Kimberly Ryan, a Philadelphia School District dance teacher, said she’s had to warn her students of the tough road they face if they want to follow in her footsteps. PADEO estimates tens of thousands of public and private school students are already taking dance as part of their curriculum.

“I have students who have come to me to say, ‘Miss Ryan, I want to be a dance educator when I grow up. What’s the path?’ And I could not confidently tell them that this was the path. That hurt me to my core,” Ryan said.

All six of Pennsylvania’s neighboring states offer teachers a direct way to get certified as dance instructors. PADEO said it’s already drawn up ideas for what a certification program could look like here and how to implement it.

Department of Education spokesperson Casey Smith said the agency is “open to hearing more about [the] proposal.”

The education culture war is raging. But for most parents, it's background noise