In this April 1, 2022 photo combination shown from top left are Lou Barletta, Pennsylvania state Sen. Doug Mastriano, R-Franklin, Bill McSwain and David White at a forum for Republican candidates for governor of Pennsylvania at the Pennsylvania Leadership Conference in Camp Hill, Pa. The four are scheduled to meet in Harrisburg, Pa., for a debate on Wednesday, April 27, 2022.

Throughout an hour-long debate in Harrisburg Wednesday — the first debate in which all the frontrunners shared a stage — the four candidates had very few real policy disagreements. 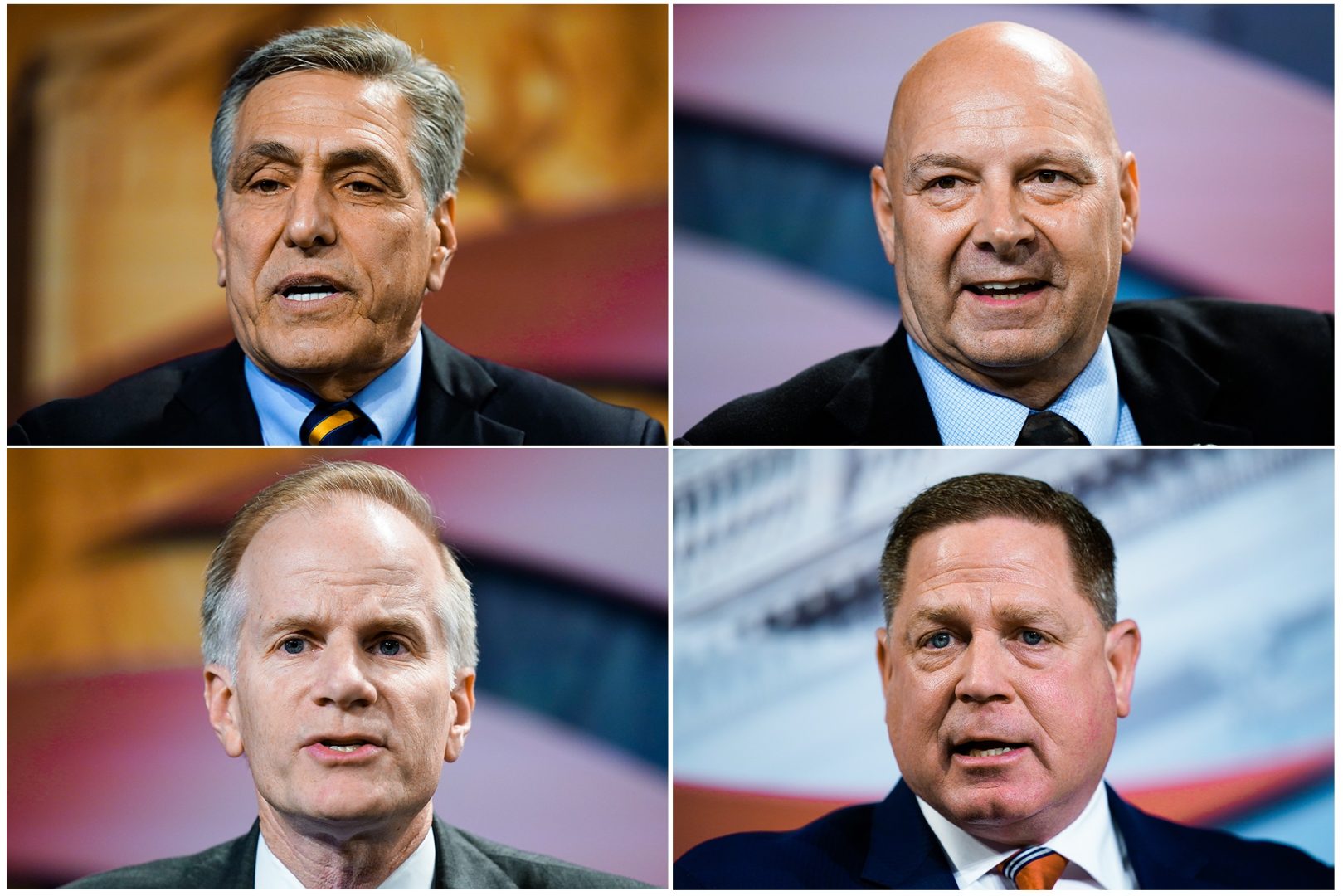 In this April 1, 2022 photo combination shown from top left are Lou Barletta, Pennsylvania state Sen. Doug Mastriano, R-Franklin, Bill McSwain and David White at a forum for Republican candidates for governor of Pennsylvania at the Pennsylvania Leadership Conference in Camp Hill, Pa. The four are scheduled to meet in Harrisburg, Pa., for a debate on Wednesday, April 27, 2022.

(Harrisburg) — No matter who wins Pennsylvania’s Republican gubernatorial primary, the candidate will probably be someone who supports essentially outlawing abortion, getting rid of mail voting, dramatically expanding fracking, and slashing regulations on drillers and other industries.

Indeed, throughout an hour-long debate in Harrisburg Wednesday — the first debate in which all the frontrunners shared a stage — the four candidates had very few real policy disagreements.

Former congressman Lou Barletta, state senator Doug Mastriano, former U.S. Attorney Bill McSwain, and businessman Dave White are all essentially battling to prove who can be most conservative and, perhaps more importantly, most like Donald Trump.

They all set out to prove it in different ways.

Mastriano talked up his efforts to find nonexistent widespread fraud in the 2020 election, to prove Trump’s theories that the process was unfair to him. Barletta noted his history of Trump-like anti-immigrant policies as mayor of Hazelton, long before Trump came on the political scene, and his quick embrace of the former president’s candidacy. Dave White argued that as a former union steamfitter and small business owner, he can keep bringing the kinds of disaffected Democratic voters into the party that Trump did.

McSwain had the hardest time threading the Trump needle. The former president appointed him as U.S. Attorney for Pennsylvania’s eastern district, but McSwain apparently fell out with Trump after he didn’t investigate Trump’s baseless claims of rampant voter fraud. Trump recently issued his only public statement on the race: McSwain is a “coward” and voters shouldn’t support him. 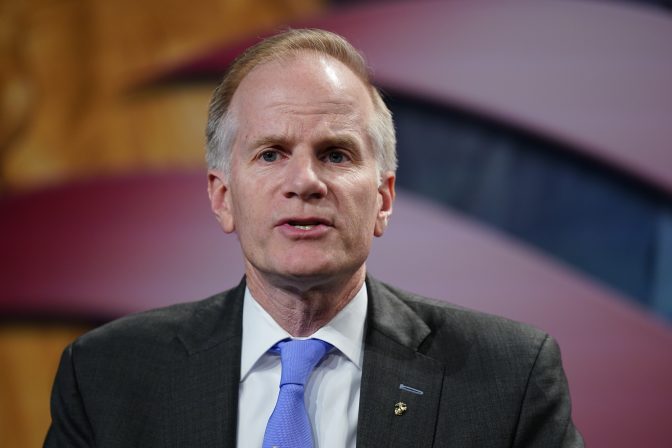 McSwain tried to skirt addressing that non-endorsement head-on, saying only that he is the “only candidate who actually served in the Trump administration” and that he can “unite all facets of the party.”

Several of the positions championed by all four candidates could bring significant changes to life in Pennsylvania.

Abortion in particular could be severely curtailed, or effectively outlawed, if one of the four Republicans in Wednesday’s debate beats Attorney General Josh Shapiro, the only Democrat running for governor, in the general election.

With a conservative U.S. Supreme Court that appears primed to repeal Roe v. Wade, which protects abortion rights nationwide, many states have already put laws in place that would curtail or outlaw abortion soon after a major ruling. Pennsylvania hasn’t — partly because state Republicans haven’t quite coalesced around a bill, and partly because Democratic Gov. Tom Wolf has pledged to strike down any attempt to restrict abortion.

That dynamic could change dramatically with a conservative GOP governor. Mastriano and White both said they support a total ban on abortion, without any exceptions for cases of rape, incest, or medical emergencies in which the life of a mother is at stake.

Mastriano took pains to underscore that position, bringing up commentator Kathy Barnette, who he is supporting for the GOP U.S. Senate nomination. 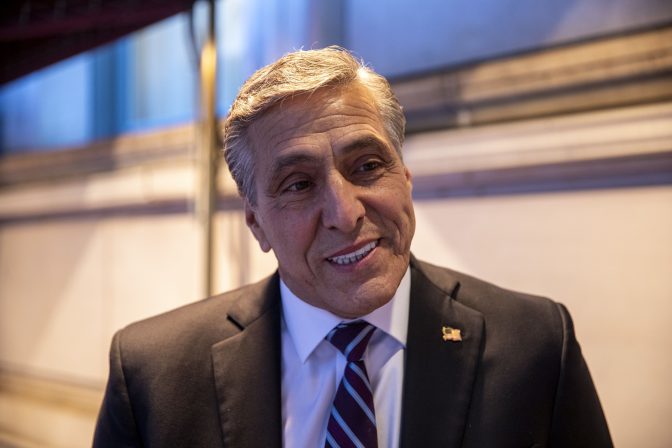 Lou Barletta has received thousands from his own PAC.

Another issue that saw the candidates in near-lockstep that would have major ramifications for Pennsylvanians: voting.

In 2019, Pennsylvania dramatically expanded voters’ ability to cast ballots by mail. Previously, they’d needed an excuse in order to do it, and the practice had been limited. Since the law changed, voters have overwhelmingly embraced mail voting — in 2020, more than 2.6 million voters cast ballots by mail, and about 4.2 million voted in person.

The practice wasn’t particularly partisan until Trump, in the summer of 2020, began a sustained campaign of baselessly saying mail-in voting would lead to fraud. Once he lost, Republicans broadly turned on mail voting.

In their calls for its abolition, the candidates in the debate claimed — without evidence — that drop boxes are widely being stuffed with fraudulent ballots, that dead people are voting, and perhaps more importantly, that the fact that some voters no longer trust elections shows that the process needs to be overhauled.

White also argued that the fact that election results now take longer is a sign that mail voting needs to be axed. Results have indeed been delayed since Pennsylvania expanded use of mail ballots, but county election officials have repeatedly told state lawmakers that they can correct the issue if they adjust state law to allow them to begin processing ballots ahead of Election Day, as other states do.

State lawmakers have so far been unable to agree on a bill that makes the adjustment.

And perhaps more than anything, the candidates were unified on energy. They want to get Pennsylvania out of the Regional Greenhouse Gas Initiative, slash regulations on drillers, and extract more natural gas however they can.

“Fracking like you wouldn’t believe,” Mastriano promised. White envisioned an influx of “six-figure jobs, fifty to sixty thousand of them.” McSwain pitched gas as the key to “supercharge our economy.”

And Barletta painted a picture of a Pennsylvania crisscrossed with new pipelines, adding that he thinks it’s “ludicrous” that Shapiro has prosecuted pipeline developers.

“Drill baby drill,” he said. “This is Pennsylvania’s future.”

Pennsylvania Election Day 2022: See how much money Democrat Josh Shapiro has raised in the race for governor