Jake Corman, Joe Gale and Charlie Gerow during the Pennsylvania in the Spotlight debate for Republican candidates for governor held at Gettysburg College on April 19, 2022. 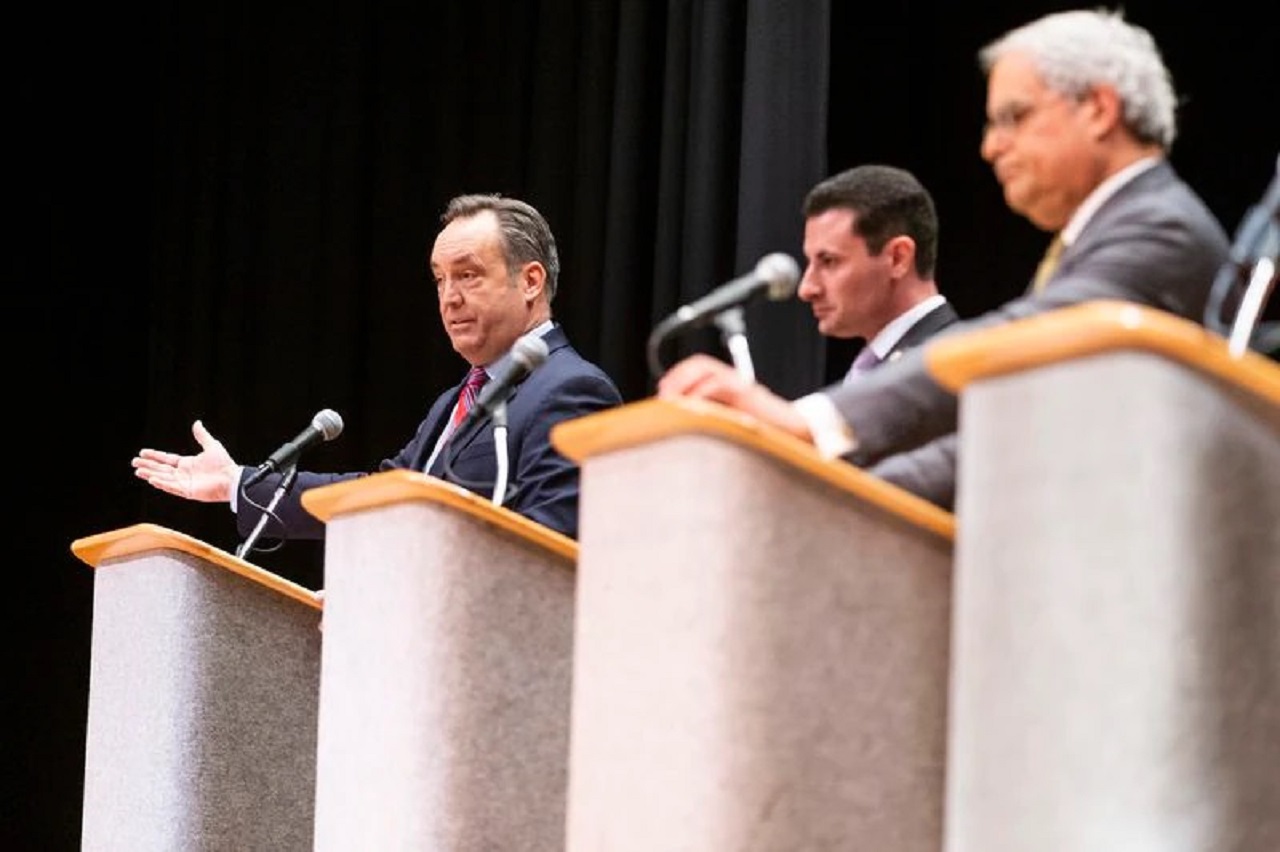 Jake Corman, Joe Gale and Charlie Gerow during the Pennsylvania in the Spotlight debate for Republican candidates for governor held at Gettysburg College on April 19, 2022.

Five Republican gubernatorial hopefuls squared off on Tuesday in a debate to help voters decide who is best suited to take on presumptive Democratic nominee Josh Shapiro on Nov. 8.

Questions touching on education, transportation, abortion, transgender athletes, gun violence and more were posed to the candidates at this Pennsylvania in the Spotlight Republican candidate for governor debate by veteran journalists with WITF’s Smart Talk host Scott LaMar moderating.

Only a few of their answers displayed any difference among them but one area that drew broad agreement was criticism of the four Republican candidates who chose not to participate in this debate.

Corman started it in his opening statement by welcoming people to the “be not afraid debate.” Gerow built on it later, saying it shows a certain amount of disrespect to Republican voters to not show up and said he would ask them “why aren’t you facing the people of Pennsylvania?”

Hart further chided the absent candidates, saying that “their communication with the public is spending millions of dollars putting out commercials that basically make up a narrative that they can’t defend in front of the public.” 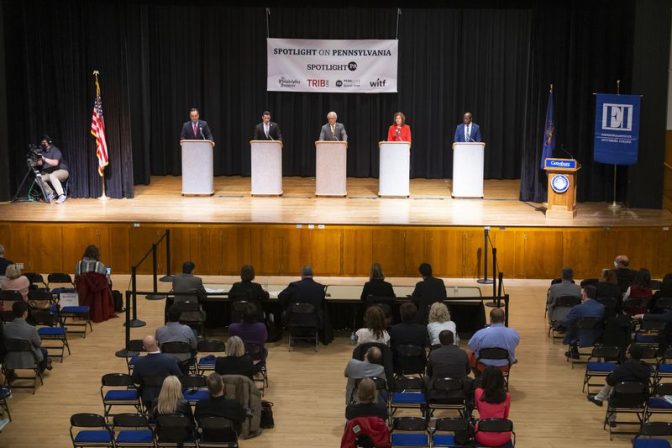 The Pennsylvania in the Spotlight debate for Republican candidates for governor held at Gettysburg College on April 19, 2022.

Republican candidate Doug Mastriano’s campaign said he had a prior commitment. Campaigns for Dave White and Bill McSwain referenced a letter that stipulated conditions for their participation, which the debate organizers rejected.

Campaigns for Lou Barletta and Corman also signed that letter identifying preconditions such as requiring a Republican moderator among other criteria. Corman chose to participate in Tuesday’s debate anyway while Barletta’s campaign did not respond to requests for comment.

“The real story of this debate isn’t just how out of touch the ‘Trump Primary’ candidates are – it’s that four candidates once gain chose to hide from Pennsylvanians and the truth is simple: Their agenda is extreme, it’s unpopular, and they can’t be bothered to answer to Pennsylvanians, only Trump.”

Those candidates as well as the ones who participated in the debate are competing for the Republican nomination to be decided in the May 17 primary. They hope to become the successor to Democratic Gov. Tom Wolf who is constitutionally term-limited from seeking a third term.

Delving into some of the issues where differences arose, Gale was the only candidate who said he would turn back the $2.2 billion in unspent American Rescue Plan money to the federal government. “I don’t believe we should just spend government money just because we have it,” he said.

Gerow said he would propose a one-time tax credit on state income taxes or use it for a temporary rollback in the gas tax to “give citizens some relief when they go to put gasoline in their cars.” Hart proposed using it for road and bridge repairs.

Corman said he would use it to provide a six-month reduction in the 58-cent-a-gallon gas tax and noted that he supported using some of it already for one-time spending initiatives such as grants to nursing homes and to help hospitals retain and recruit nurses.

Zama said he would use it to improve access to health care, expand broadband and aid women who became impoverished due to loss of jobs, unplanned pregnancies, and lost access to child care during the COVID-19 pandemic.

On the issue of abortion, all identified themselves as “pro-life” but Corman stood alone in saying he would make exceptions to an abortion ban to allow them in cases of incest, rape and where the life of the mother is at risk.

The Pennsylvania in the Spotlight debate for Republican candidates for governor held at Gettysburg College on April 19, 2022.

Sharing a similar view to the others on stage, Zama said, “I do not believe in any provisions that fail to protect a child in the womb and I will not sign or support any policies that seek to terminate a baby.”

Recreational marijuana legalization was another area where the candidates’ positions showed some deviation. Gerow said, “If a bill came to my desk, I would sign it.”

Hart, Gale and Zama said they didn’t support it. Corman said he’s not comfortable legalizing it but is willing to listen to those who support that view but added, “someone’s got to do a whole lot of convincing to get me there.”

On the issue of reducing gun violence, Hart said more gun laws are not the answer. She and Zama both spoke about the need to address societal problems that lead young people to violence. Further, Zama said he would set up citizens councils involving community and religious leaders in high-crime communities to seek sustainable solutions.

“The last thing we need is stricter gun control when the liberal left want to defund police,” Gale said. “We need to protect ourselves, our families and our properties. And to think that’s a topic of discussion in the society we live in is awful.”

Gale further said he would cut off state and federal funding to cities that want to do that as well as ones that want to be sanctuary cities that protect undocumented immigrants from deportation or prosecution and ones that want to host safe injection sites that are designed to provide a place for people to consumer illegal drugs and prevent overdose deaths.

Gerow said he would increase funding for law enforcement and put more police on the street. He also said in looking at the root problems that there has to be a focus placed on the breakdown of the nuclear family because “there is a lot of empirical data to suggest that that leads to violent crime.”

None of the candidates who participated in the debate have had success in reaching double-digit support in most of the polls that have been conducted to date. Then again, with no GOP party endorsed candidate and a nine-person field vying for the party’s nomination, no clear frontrunner has emerged in the race either.

The event was organized by a coalition of media organizations including Spotlight PA and its founding partners – PennLive/The Patriot-News, The Philadelphia Inquirer, Trib Total Media, and WITF – in conjunction with the college’s Eisenhower Institute.have yet to gain sparred