In this Thursday, Jan. 23, 2020 file photo, Passengers wear protective face masks at the departure hall of the high speed train station in Hong Kong. Fear about the effects of a new virus found in China is spreading faster through financial markets around the world than the sickness itself. U.S. stocks fell to their biggest weekly loss since early October on worries that the new coronavirus could ultimately hurt travel and global economic growth.

What happens in the post-mask world of travel? 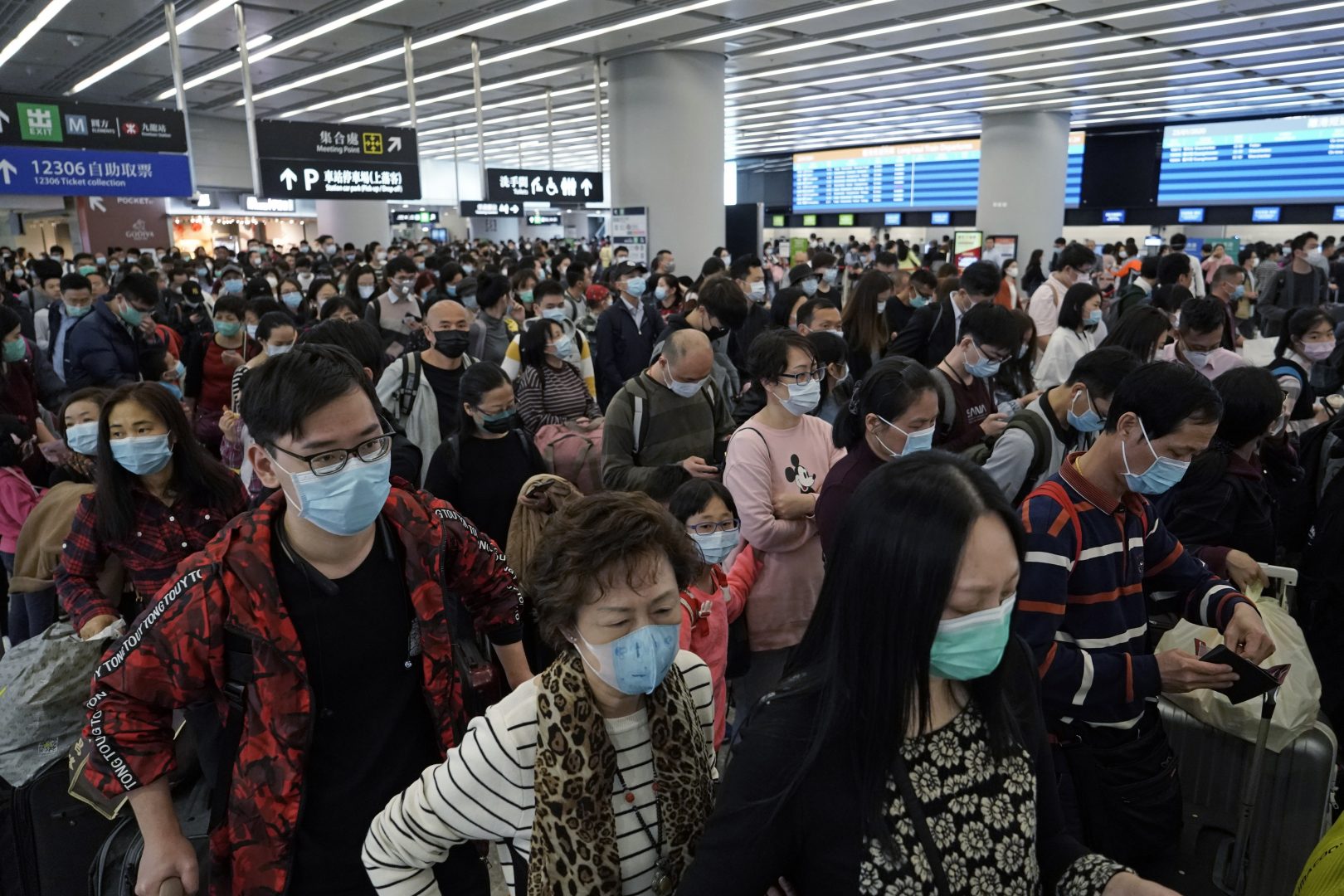 In this Thursday, Jan. 23, 2020 file photo, Passengers wear protective face masks at the departure hall of the high speed train station in Hong Kong. Fear about the effects of a new virus found in China is spreading faster through financial markets around the world than the sickness itself. U.S. stocks fell to their biggest weekly loss since early October on worries that the new coronavirus could ultimately hurt travel and global economic growth.

A ruling by a federal judge has ended — at least for now — the requirement that people wear masks on planes and public transportation, and there is plenty of confusion about the new, post-mask world of travel.

The decision by a lone judge in Florida toppled 14 months of government insistence that travelers wear masks to reduce transmission of COVID-19. Within hours, all major U.S. airlines and many airports announced — sometimes to passengers in the middle of flights — that travelers could take off their masks.

WHAT EXACTLY WAS THE RULING?

WHAT DOES IT MEAN?

Once TSA said it would no longer enforce the rule, airlines, airports, transit systems and ride-share services were free to decide for themselves whether to require masks. United, Delta, American, Southwest, Alaska, JetBlue and other airlines all made masks voluntary.

On the ground, however, requirements could vary from place to place. New York City’s public transit system planned to keep its mask requirement in effect. In San Francisco, the regional commuter rail system known as BART made masks voluntary, but the city transit authority did not.

The transit agency serving Philadelphia and its suburbs said masks will no longer be required on subways, buses and trains or in stations, even though the city has a mask mandate.

HOW SAFE IS IT TO TRAVEL NOW?

Air filtration on planes is generally excellent, but boarding and exiting a plane can put people close together in spaces with poor ventilation, said Dr. Babak Javid, a physician-scientist at the University of California, San Francisco. The risk on other forms of transportation varies.

Dr. David Dowdy, an infectious-disease epidemiologist at Johns Hopkins Bloomberg School of Public Health, said planes can carry the virus from place to place, but that we should be focusing more on big indoor events such as concerts and sporting events — even large weddings —where people get together and talk, shout and sing.

SHOULD I STILL WEAR A MASK ON PLANES?

The CDC continues to recommend that people mask up indoors while traveling. 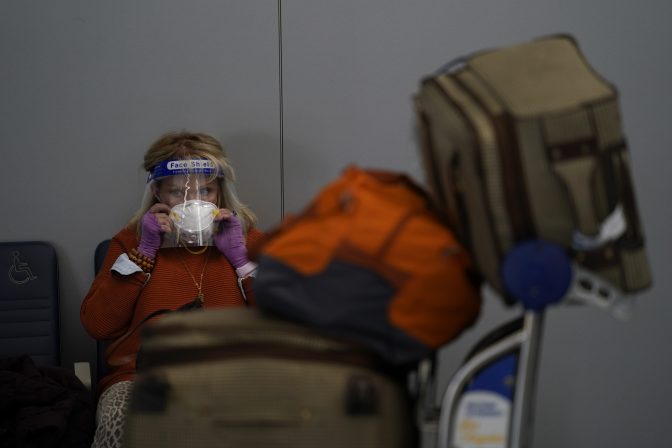 A traveler adjusts her mask while waiting to check in for her flight at the Los Angeles International Airport in Los Angeles, Monday, Nov. 23, 2020. About 1 million Americans a day packed airports and planes over the weekend even as coronavirus deaths surged across the U.S. and public health experts begged people to stay home and avoid big Thanksgiving gatherings.

DO MASKS WORK IF NOBODY ELSE WEARS ONE?

Yes, masks still give some protection from COVID-19, but they work better if others wear them too.

High-quality masks work in two ways, said Carl Bergstrom, a University of Washington evolutionary biologist who studies emerging infectious diseases: They protect the wearer by limiting the number of infectious particles inhaled, and they protect others by limiting particles exhaled if the wearer is infected.

WILL I STAND OUT?

Probably not. Delta Air Lines CEO Ed Bastian, who favored dropping the rule, said before the judge’s order that he expected to see a “surprising number” of passengers and airline employees wear masks even after the mandate expired.

“I may choose to wear a mask once in a while,” he said.

Still, tension among passengers over mask-wearing could continue, said Eileen Ogintz, who writes about family travel and advises parents of small children who can’t be vaccinated to keep masking up.

“I wouldn’t be surprised if you got some dirty looks or nasty comments” from unmasked passengers, she said. “That’s a conversation to have with the kids ahead of time — why you’re wearing masks.”

CAN I GET A REFUND IF I DON’T WANT TO FLY NOW?

No, unless the airline cancels your flight.

However, if you call the airline and explain why you’re not comfortable traveling without a mask mandate, most will let you change the flight for free or give you a credit that you can use later, said Scott Keyes, founder of Scott’s Cheap Flights travel site. 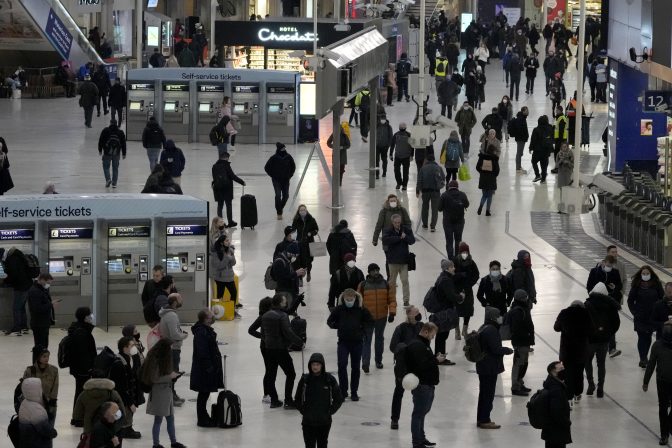 People pass through Waterloo train station, in London, during the morning rush hour, Monday, Nov. 29, 2021. The new potentially more contagious omicron variant of the coronavirus popped up in more European countries on Saturday, just days after being identified in South Africa, leaving governments around the world scrambling to stop the spread. In Britain, Prime Minister Boris Johnson said mask-wearing in shops and on public transport will be required, starting Tuesday.

WILL THE LIFTING OF THE BAN AFFECT INTERNATIONAL FLIGHTS?

When flying between two countries, expect your airline to follow the rules in whichever country is more restrictive. Passengers flying to Canada, for example, will have to don masks at some point during the flight, but it’s not clear exactly whether that means when crossing into Canadian airspace or some other point.

Henry Harteveldt, a travel analyst for Atmosphere Research Group, said there might be international airlines that will still require masks even on flights to and from the United States.

WILL THIS MAKE MORE PEOPLE WILLING TO FLY?

Industry officials don’t expect that. They say that there could be a small number of people who will start flying now because they don’t have to wear a mask, but that will be offset by a few people deciding not to fly if others are unmasked.

Although the airline industry lobbied to kill the mandate — after supporting it originally — airlines don’t expect the rule’s demise to affect revenue. They are far more interested in seeing the United States repeal another pandemic-era rule: The requirement that people test clear of the virus within a day of flying to the U.S.

A Biden administration official said Tuesday that there were no changes expected to the pre-departure testing requirement. 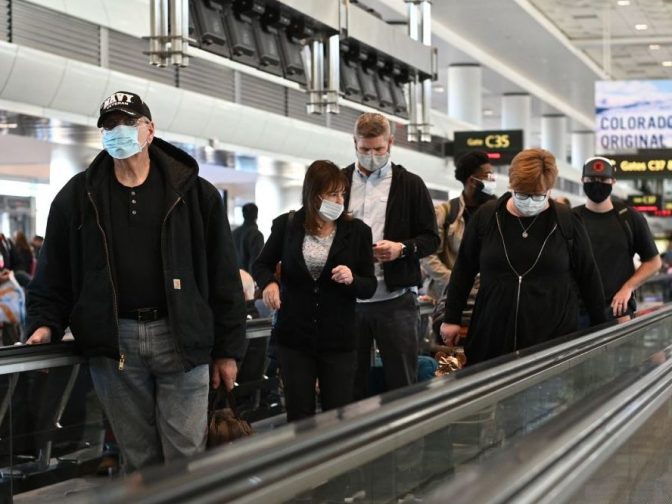 WHEN DID THE U.S. REQUIRE MASKS?

The mask mandate for transportation began in February 2021, shortly after President Joe Biden took office, and was extended several times. Last week, the CDC extended it again until May 3. The CDC said the extra time was needed to study the BA.2 omicron subvariant, which is now responsible for the vast majority of cases in the U.S.

HOW CAN A SINGLE JUDGE HAVE SO MUCH POWER?

Usually, decisions by a federal judge affect only the people involved in one case, or a limited geographic area. But judges can also issue so-called nationwide or universal injunctions that apply across the country, and it is happening more often — a practice that has drawn criticism from conservative members of the U.S. Supreme Court.

WHO IS JUDGE KATHRYN KIMBALL MIZELLE?

Mizelle, 35, was nominated in 2020 by former President Donald Trump and confirmed in a party-line vote in the Senate, which was then controlled by Republicans, after Trump had lost his bid for re-election. She is the youngest Trump appointee on the federal bench, and the American Bar Association had rated her “not qualified” in part because she had only eight years experience in practicing law.

WILL THE BIDEN ADMINISTRATION RESPOND?

The White House has acknowledged that because of Mizelle’s order, the mask mandate “is not in effect at this time.” The administration could appeal the ruling; it hasn’t said.

While the mask ban was popular in the beginning, support has waned over time, according to public-opinion polls. As state and local mask rules were scrapped, and Americans grew accustomed to going bare-faced, the mandate for transportation drew fire from Republican politicians and some Senate Democrats who face tough re-election fights. 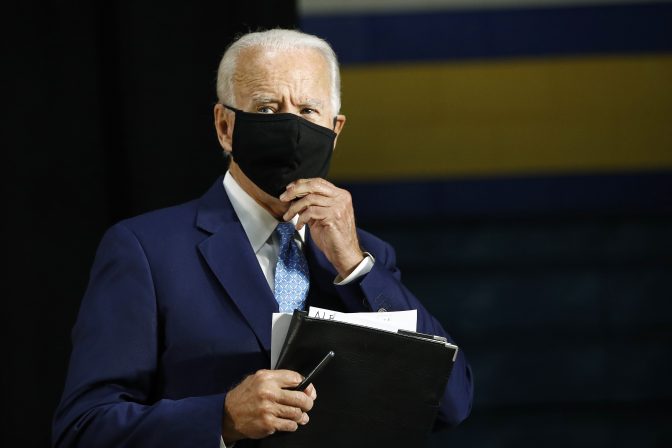 Democratic presidential candidate, former Vice President Joe Biden puts on a face mask to protect against the spread of the new coronavirus as he departs after speaking at Alexis Dupont High School in Wilmington, Del., Tuesday, June 30, 2020.

IS THE TIMING OF THIS RIGHT?

New reported U.S. cases of COVID-19 are relatively low compared with the past two years, but they have increased lately and are likely an undercount. Hospitalizations are nearly flat and deaths are still declining.

Dowdy, the Johns Hopkins epidemiologist, said it’s reasonable to consider removing the mask mandate on travel given the lull in severe disease.

“It would just be nice to do it when cases are falling rather than rising,” he said, “and for the decision to be made by people trained in public health rather than law and politics.”

WHAT IF COVID CASES INCREASE?

A new surge in cases might not be enough to revive the mask rule, but it could roil travel in other ways. U.S. airlines canceled thousands of flights in late December and early January, largely because so many employees were out sick with omicron.

“Imagine what would happen if a critical mass of Southwest Airlines pilots are sick and can’t fly this summer?” said Harteveldt, the travel analyst. “Whether it’s Southwest or any airline, it could be highly disruptive to summer travel.”