FILE - A man wears a face mark as he fishes near docked oil drilling platforms, Friday, May 8, 2020, in Port Aransas, Texas. The U.S. Interior Department on Wednesday, Nov. 17, 2021, is auctioning vast oil reserves in the Gulf of Mexico estimated to hold up to 1.1 billion barrels of crude. It's the first such sale under President Joe Biden and underscores the challenges he faces to reach climate goals that rely on cuts in fossil fuel emissions.

Scientists are tracking the link between pollution, climate change, and rising mercury levels in fish 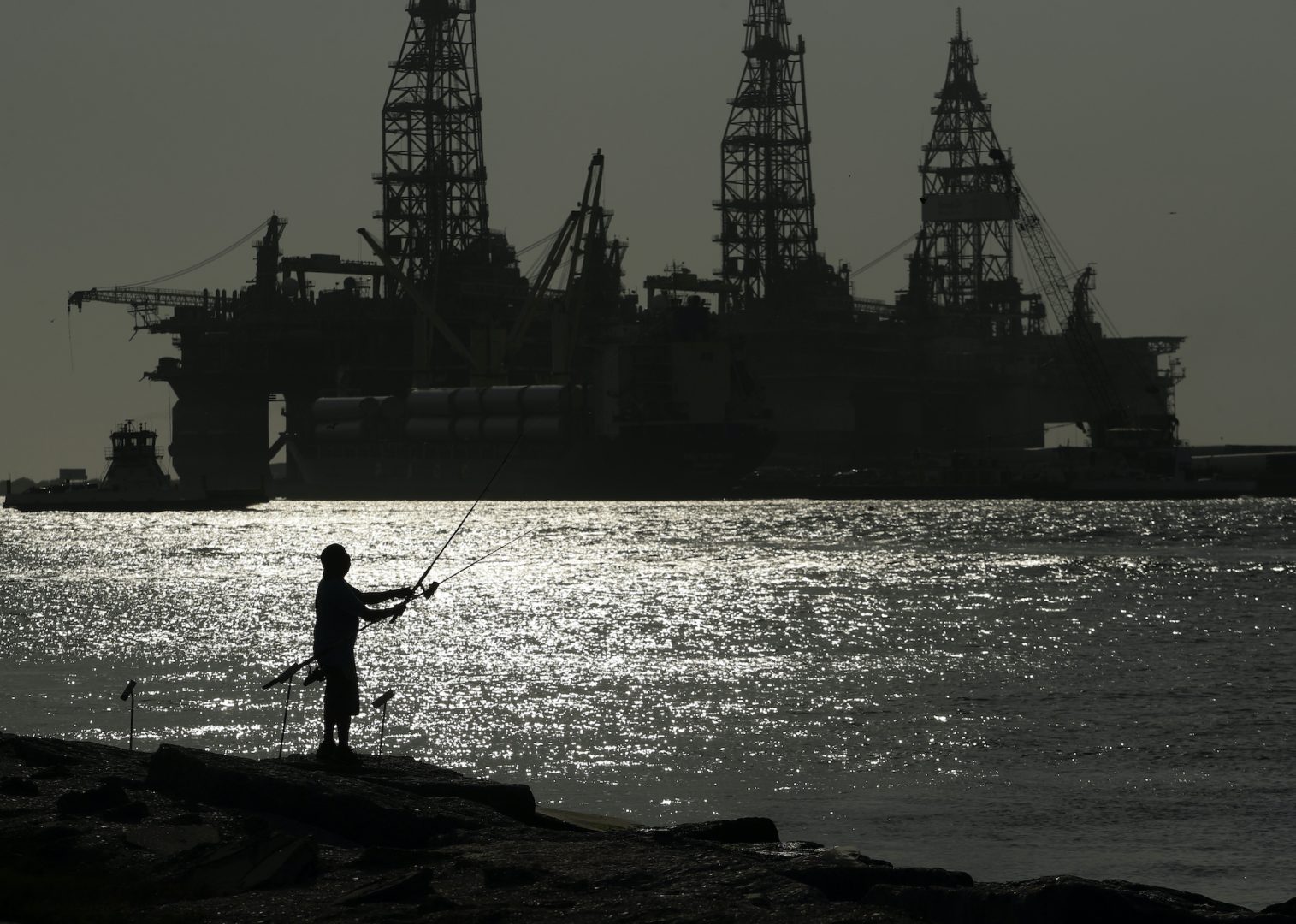 FILE - A man wears a face mark as he fishes near docked oil drilling platforms, Friday, May 8, 2020, in Port Aransas, Texas. The U.S. Interior Department on Wednesday, Nov. 17, 2021, is auctioning vast oil reserves in the Gulf of Mexico estimated to hold up to 1.1 billion barrels of crude. It's the first such sale under President Joe Biden and underscores the challenges he faces to reach climate goals that rely on cuts in fossil fuel emissions.

Eating fish is the most common way people are exposed to mercury — more specifically, methylmercury, a highly toxic organic compound. While low levels of exposure are typically harmless, and fish is a healthy source of protein, its overconsumption can lead to neurological problems, especially for fetuses and young children.

The amount of mercury in the atmosphere has quadrupled since the Industrial Revolution, according to some estimates. The pollution has been largely caused by emissions from coal-fired power plants, but other industries also play a role.

Though mercury levels in water are declining — thanks to decreasing coal use in North America and Europe, and technology that reduces sulfur in smoke stacks — scientists are now discovering that climate change might increase methylmercury levels in fish. That’s because fish are becoming more active with rising ocean temperatures, requiring more food and therefore, ingesting more mercury, according to a 2019 Harvard University study.

Researchers in Delaware and New Jersey are trying to find out where and why mercury levels persist. The research, they say, is part of an effort to manage marine fisheries and inform human health guidelines.

“Understanding how methylmercury accumulates in marine fish will help us identify and control its sources to the ocean, and studying how concentrations of methylmercury vary among fish that people eat will improve guidelines for safe seafood consumption,” said Dr. John Reinfelder, an environmental sciences professor at Rutgers University, who has been studying mercury levels in bluefin tuna populations.

Between 2017 and 2021, he and colleagues at Rutgers, the University of California, and National Taiwan University, evaluated how bioaccumulation of mercury in bluefin tuna differs by region.

They compared mercury bioaccumulation rates among three species of bluefin tuna in the Mediterranean Sea, the North Atlantic Ocean, the North Pacific Ocean, and the Eastern Indian Ocean.

The researchers found that the rates vary significantly by area, and that it may reflect global patterns of pollution. They also found that, in general, methylmercury levels within fish increased with concentrations of the toxin in seawater and in their food.

One of Reinfelder’s graduate students also is partnering with scientists from National Taiwan University to evaluate where adult bluefin tuna feed and the primary source of mercury (such as atmospheric deposition or river discharge, for example) to the marine food web in the western North Pacific Ocean.

University of Delaware researchers, in collaboration with the University of British Columbia, have been trying to determine the causes of mercury in the food web of the Beaufort Sea off the coast of Canada. The scientists eventually want to evaluate historical mercury trends in the Beaufort Sea and determine whether climate change explains those trends.

“Our work will help forecast the future trend of mercury concentration in the marine food web,” said Dr. Mi-Ling Li, an assistant professor of environmental chemistry and toxicology at the University of Delaware.

In the Delaware River and coastal estuaries in New Jersey, there are “hot spots” of mercury caused by legacy industries, like chlorine production and mercury reprocessing, Reinfelder said.

“We often think, ‘Oh, big predators like bluefin tuna, that’s what you have to watch out for.’ But if you have a local source, then fish that may not normally be contaminated could become contaminated,” Reinfelder said.

Striped bass in New Jersey, for example, should be avoided by pregnant people and children younger than age 6, he said.

What should the public know?

The U.S. Food and Drug Administration measures mercury in seafood, but its advisories are informational rather than actionable, according to Reinfelder. In other words, the agency doesn’t prohibit food from going to market — that means it’s up to the public to research and understand the guidelines.

The Environmental Protection Agency and the World Health Organization have guidelines about mercury, as does each U.S. state. Advisories in New Jersey and Pennsylvania are lengthy,  and detail how often residents can safely consume specific fish species from each waterway in the state — whether that’s once a week, once a month, or never.

“It’s a bit of a patchwork,” Reinfelder said.

The situation is more opaque when it comes to the world market, he argues, because fish caught in one area are transferred to another part of the world. More than 90 percent of the bluefin tuna that he and his colleagues sampled between 2017 and 2019 exceeded the FDA and WHO limit for mercury in a top predatory fish. Those were fish that went to market, he said.

“Individual fish don’t carry a mercury content marker,” he said. “If information about the age and location of capture was linked in some way to each fish in the market, regulatory agencies, commercial buyers, and the public could assess the level of mercury in individual fish and make better informed decisions about human consumption.”

Pregnant people and parents of young children should be careful about what’s on their dinner plate, the experts say, since mercury is a developmental neurotoxin that inhibits the central nervous system’s development.

Consuming above the recommended amount of fish per week, month, or year is not healthy for anyone, however.

Levels can vary — salmon is a low mercury choice, while bluefin tuna contains some of the highest levels of mercury. Canned tuna falls somewhere in the middle.

Changes must be made globally to reduce mercury pollution, Reinfelder and Li said. Fossil fuel combustion makes up a significant amount of global mercury emissions.

“The majority of the mercury in the environment right now is anthropogenic [human-caused]. So if climate change is the culprit to making that increase in the future, that means we should mitigate or reduce the CO2 emission and other greenhouse gasses to combat the CO2 level,” Li said. “If we can’t achieve that, and we want to maintain the safety of the seafood, then we have to have a more stringent mercury emissions policy.”

Scientists hope that the 2017 Minamata Convention, which aims to control the supply and trade of mercury and reduce mercury emission, will result in positive environmental trends by the next decade.

What the latest U.N. climate report says about transportation