The group continues anti-violence work and tries to regain its status as hundreds of thousands in grant dollars go to other Berks organizations for similar work. 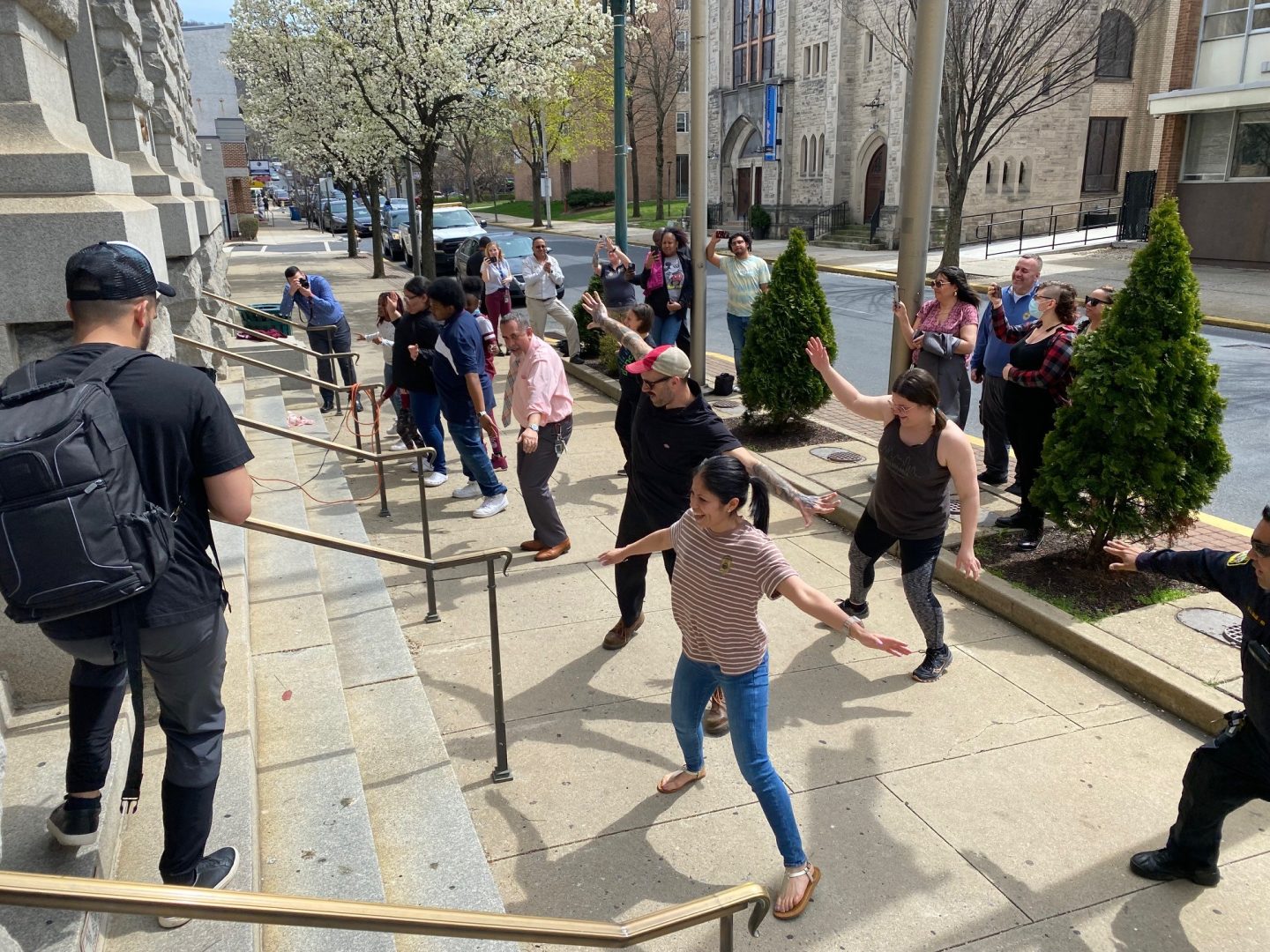 This story has an update here, describing how the IRS reinstated RIZE was as a nonprofit in late April.

(Reading) — In September, two Reading-area community groups found out they were receiving nearly half a million dollars in state funds to combat gun violence.

Youth arts group RIZE was set to receive more than $225,000 from the Pennsylvania Commission on Crime and Delinquency to help it serve the mental health needs of youth and connect kids to their incarcerated parents.

But RIZE leadership had applied for the grant stating that the group is a federally recognized nonprofit – a status the IRS says it has not held since 2016.

As soon as the Pa. Commission on Crime and Delinquency, which awarded the grants, found that out, it told RIZE they wouldn’t be getting the money after all.

In part, that’s because the federal tax-exempt status requires nonprofits to be accountable for how they spend grant money. And it’s a way for the public to gauge whether a nonprofit is doing what it says it will do and whether it’s worth contributing to.

It was not the only instance in recent years the group has lost out on project funds because it hasn’t met the fiscal transparency criteria required for nonprofits.

Edna Garcia-Dipini, the group’s CEO and founder, acknowledged RIZE did not have nonprofit status when it applied for the grant. But she said the issue is not simply the group misrepresenting itself. She argues it demonstrates poor administration from the state and federal government.

She says RIZE is trying to regain its IRS nonprofit status – but will keep working in the community regardless.

The money it would have gotten has been recycled and awarded to other organizations including other groups in Berks County for similar work.

RIZE applied for the money to fund a project called RIZE Above Bars.

The project is described generally in the grant application as a way to reduce recidivism and violence among kids monitored by the Berks Juvenile Probation Office.

“We have been told by our youth that they desire a safe place to talk about issues of gun violence reduction, social justice, such as race, and want the ability to take action with their peers on community service projects,” the project narrative states. “This initiative provides both.”

The program would have paid a mental health trauma-informed consultant for that work $10,909 annually over the three years of the grant, according to the project budget.

“They need to be connected with someone, like the licensed master social workers,” Garcia-Dipini said. “So we connect them to make sure that the relationships are healthy and sustainable.”

Garcia-Dipini would have received $53,760 annually for the first two years and $40,320 the last year to direct the program, the budget outlines.

The budget also allotted around $12,000 for an accountant, $3,600 for renting space out of the GoggleWorks Center for The Arts and more for supplies and petty cash.

When the state reviewed grantees to make sure they were eligible, it found out RIZE wasn’t, and told the group it wouldn’t be getting the money because it did not have an active 501(c)(3) status.

501(c)(3) is a tax-exempt status reserved for groups dedicated to charitable, religious, educational and similar purposes. These sorts of groups must also produce an annual return, known as a form 990.

The IRS’s public information on RIZE shows the federal government first designated the organization as a 501(c)(3) in 2014, taking effect retroactively starting in 2012. The government revoked that designation in 2016.

Garcia-Dipini claims the revocation was retroactive and said the IRS did not make her aware of the revocation at that time. It was only until she applied for grants years later that she was informed the group’s status had lapsed, she said.

The page describes the action as an “auto-revocation,” which happens when an organization does not file a form 990-series tax return or notice for three consecutive years.

Garcia-Dipini said she has given the IRS every form and material it has ever requested.

Garcia-Dipini said she did submit her application to the PCCD, knowing RIZE did not have 501(c)(3) status, with the hopes of having an organization with active nonprofit status be a fiscal sponsor for RIZE.

“I even asked multiple community members here to be my fiscal sponsor for that grant. And many of them said ‘no,’” Garcia-Dipini said. “And guess what, at 11:59 pm before that grant was due, I put it in…I put it in, because I knew what I have is a remedy to not cease violence, but to definitely lower it.”

Garcia-Dipini said she first became aware of her organization losing their 501(c)(3) in April of 2021 after applying for a Youth Advisory Board grant from the Berks County Community Foundation.

She says she was informed shortly before being denied the grants from an organization involved in the grant process.

Jason Brudereck, director of communications for BCCF, confirmed those details.

“Our verification system showed that their tax exempt status had been revoked,” Brudereck said. “We contacted RIZE and let them know, and they indicated to us in a return email that they had been notified about this shortly before we told them.”

Brudereck did not share the email correspondence between BCCF and RIZE.

In the review process for the awarded grant, PCCD discovered that RIZE did not have a 501(c)(3) as it stated in its application.

RIZE presented PCCD with potentially having a YWCA Tri-County Area in Pottstown act as fiscal sponsor for the grant.

YWCA Tri-County Area leaders did not respond to multiple requests for comment on its effort to help RIZE.

PCCD confirmed that the YWCA offered to take the RIZE program under its purview for the grant, but the commission ultimately decided to rescind the award.

“Unfortunately, since RIZE was not eligible to make the initial application in the first place, and the introduction of new partners substantially changed the initial proposal, the commission was unable to move forward with the project,” said Kirsten Kenyon, director of Research, Evaluation and Strategic Policy Development for PCCD.

Working to get back on track

Garcia-Dipini said after losing the BCCF grant in April 2021, she reached out to the office of U.S. Rep. Dan Meuser, a Republican who represents parts of Berks County.

Tyler Menzler, chief of staff for Meuser, said his office has been working with the IRS’s Philadelphia office on getting RIZE its 501(c)(3) status back.

Garcia-Dipini says the process of trying to work with the IRS has been arduous, slow going, confusing and stressful.

Unable to obtain certain grants, Garcia-Dipini said she is still working with philanthropists, searching for other community awards and pulling out of her own pocket to sustain RIZE programming.

The IRS’s media relations office did not respond to multiple requests for comment for this story.

Reading has seen an influx in violent crime in recent weeks, with reports of shootings, stabbings and even sexual assaults.

The recent surge in violence has spurred more focus around prevention.

The Village of Reading, which has been doing youth anti-violence work in the city since 2019, was awarded just over $195,000 toward its community outreach programs. They received funding in the same round as RIZE.

The money for the Village of Reading will also go to cover the cost of a director, part-time assistant, two part-time violence interrupters and more.

The Village of Reading announced it will have a “safe haven” at Alvernia University’s downtown campus.

The money that was originally allocated to RIZE was re-awarded in another round of grants in January, Kenyon said.

In that round, The Berks Community Action Program received $600,000 to go toward a youth outreach initiative that aims to “reduce and eliminate gang involvement and gun violence.”

RIZE is slated to participate in a slew of anti-violence events that include marches, free performances and a social awareness campaign.

RIZE this month is putting on events for Berks4Peace, an anti-violence initiative. They include a pop-up dance performance in front of City Hall, and free arts and poetry programming at GoggleWorks Center for the Arts.

The group is also involved in organizing a peace march through Reading on April 30.

Garcia-Dipini said that she is determined to again make RIZE a nonprofit and to continue its work in Reading.