Death Pill, an all-female Ukrainian punk band, is one of the bands featured on Band Together's compilation of U.S. and Ukrainian punk to raise money for humanitarian aid in war-torn Ukraine.

Proceeds from this digital album will be donated to Razom, a New York-based non-profit providing humanitarian aid to Ukraine. 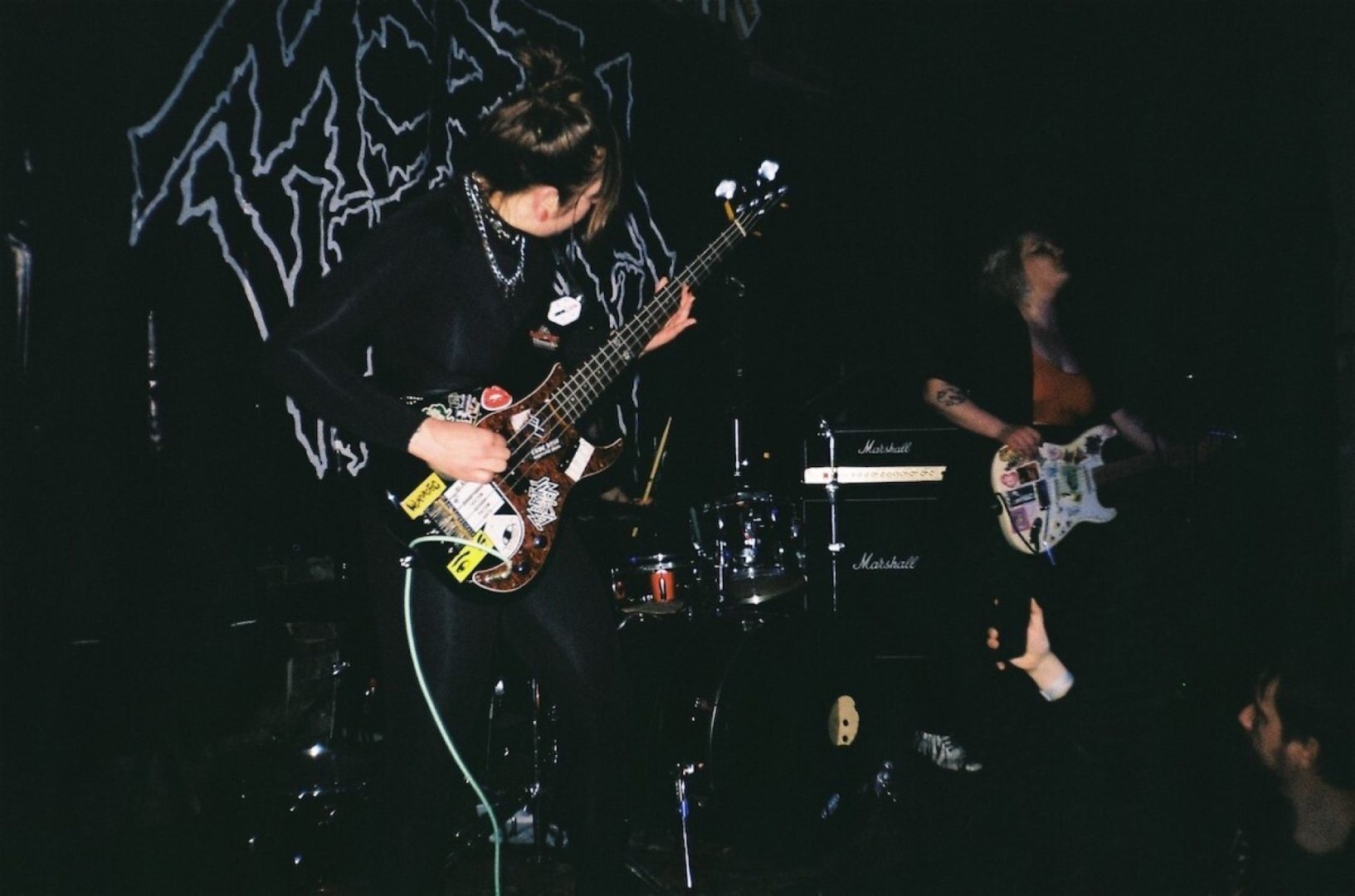 Death Pill, an all-female Ukrainian punk band, is one of the bands featured on Band Together's compilation of U.S. and Ukrainian punk to raise money for humanitarian aid in war-torn Ukraine.

The Ukrainian hardcore band Кат had recorded new songs last fall and scheduled a digital album release for March 11. Little did the band know at the time that date would come two weeks into the Russian invasion of their country.

Кат is based in Kharkiv, a city hard hit by the Russian army. At least 1,000 buildings have been destroyed. Guitarist Kyrylo Brener left the city to be with family in Lviv, a relatively safer city in the western part of Ukraine near Poland, but Lviv is also now experiencing attacks.

“Thanks to God and I don’t know who guides us, they are safe,” Brener said last Friday. “They have food, they have water, they have basic communications.”

Despite the invasion, the band decided to go ahead with the album release.

“Is this really a time for music? It’s a really complicated question,” Brener said in an interview last week over Zoom. “We don’t know what will happen tomorrow — I don’t want to be really dramatic here, but even if we will be alive, it’s a war. We decided to release it anyway. Maybe these songs can cheer someone, or at least distract from the circumstance. That’s why we decided to release it during the war.”

Кат submitted one of their new songs, “Атлантида” (Atlantis) to a benefit compilation album “Band Together: A Benefit for Ukraine,” put together in Philadelphia featuring punk and hardcore bands, roughly half from the U.S. and half from Ukraine.

Brener and Dukariev wrote “Atlantis” last fall. It was not written about the current war, but is eerily prescient:

…we don’t know it:
Painless joy, we only know war.
Not to be yourself – is to live in vain.
We hear the roar – this is the roar of bombs
Together all as one we suffered losses.

“I think something was in the air and a lot of people felt this,” Brener said about writing the song six months ago. 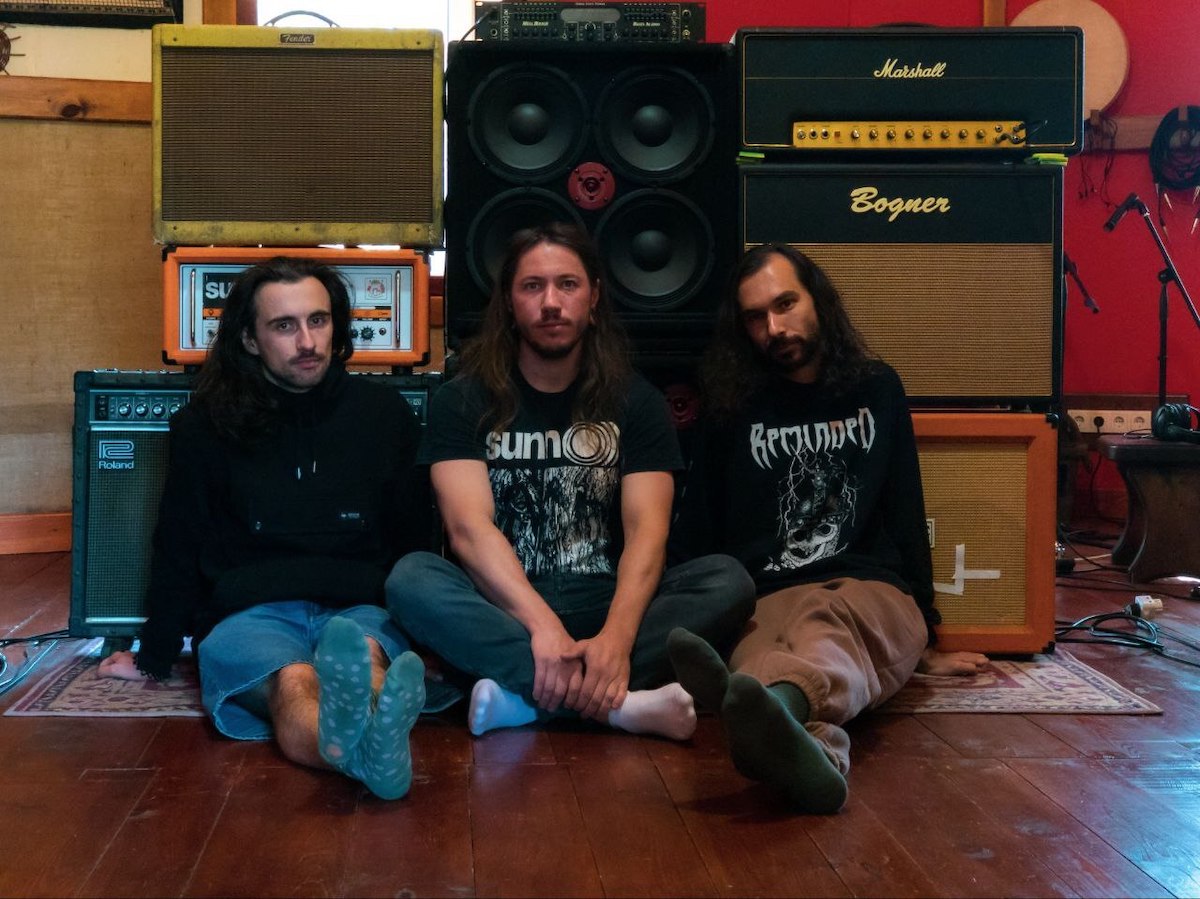 The band Кат is one of the Ukrainian bands participating in a compilation from Band Together. (Left to right) Pictured are band members Maksym Dukariev, Andriy Kasyanenko, and Kyrylo Brener.

Although ostensibly inspired by the 2019 Ukrainian post-apocalyptic film “Atlantis,” it was written while the band was seeing news reports about Russian troops maneuvering to the Ukrainian border last fall.

“I think some of those lines were kind of picked up from this feeling that was in the air,” Brener said. “That’s why right now, those lines kind of sound prophetic to me.”

The band had previously written songs in English and Russian. “Atlantis” is one of Кат’s first songs written in Ukrainian.

The “Band Together” compilation was put together by long-time Philadelphia punk musicians Janis Chakars and Derek Moore. Two years ago, Chakars was behind “19 Notes on a Broken System,” a punk compilation of mostly Philly bands assembled to benefit Black Lives Matter in 2020.

Among the more popular names on the Band Together compilation is singer-songwriter Ted Leo, of Ted Leo and the Pharmacists and frequent collaborator with Aimee Mann. There is a previously unreleased studio recording by the Brooklyn-based punk/cabaret band The World/Inferno Friendship Society, whose leader Peter Ventantonio, aka Jack Terricloth, died last May.

Proceeds from this digital album will be donated to Razom, a New York-based non-profit providing humanitarian aid to Ukraine.

Chakars, who is also an associate professor of communications and digital media at Neumann University, has been studying the Russian manipulation of information in the nearby Baltic states. His family has history in that region of the world: in World War II, his family fled the Soviet invasion of Latvia.

“Every time we listen to these songs, you can’t help but talk about the wider context and the reality of the war for these folks,” he said.

Most of the Ukrainian bands are lesser-known, rarely if ever playing outside of their own country, with names like Death Pill, Terrorscum, and The Raw.

The music is as aggressive as their names.

“For me, when I listen to Death Pill or I listen to The Raw, I feel the emotions of this war,” Chakars said. “As I listened to the whole album, I just feel rage and I feel a heartbreak and I feel frustration and, you know, all the other things that you should feel when you’re thinking about a war, particularly one as brutal and unjust as this one.”

The band Death Pill is an all-female hardcore band that formed in Kyiv about five years ago. Like Кат, they had recorded a song earlier and planned to release it in February, but the war put those plans on hold.

However, the filmmaker with whom the band was collaborating surprised them by sending a finished music video for the song “Расцарапаю Ебало” (Scratch Your Face), so the band decided to go ahead and release the song online, and sent it to Chakars for “Band Together.”

Also like Кат, the song was not written about the war, but nevertheless resonates with it.

“The song is about my ex-boyfriend, who hurt me very much,” said guitarist and singer Marianna Navrotskaya in an interview over social media. “It was always a joke-song and I never planned that we would play it seriously, but the girls talked me into it. Today we are ready to ‘tear the face’ of every freak who encroaches on our freedom and independence with our manicured nails.” 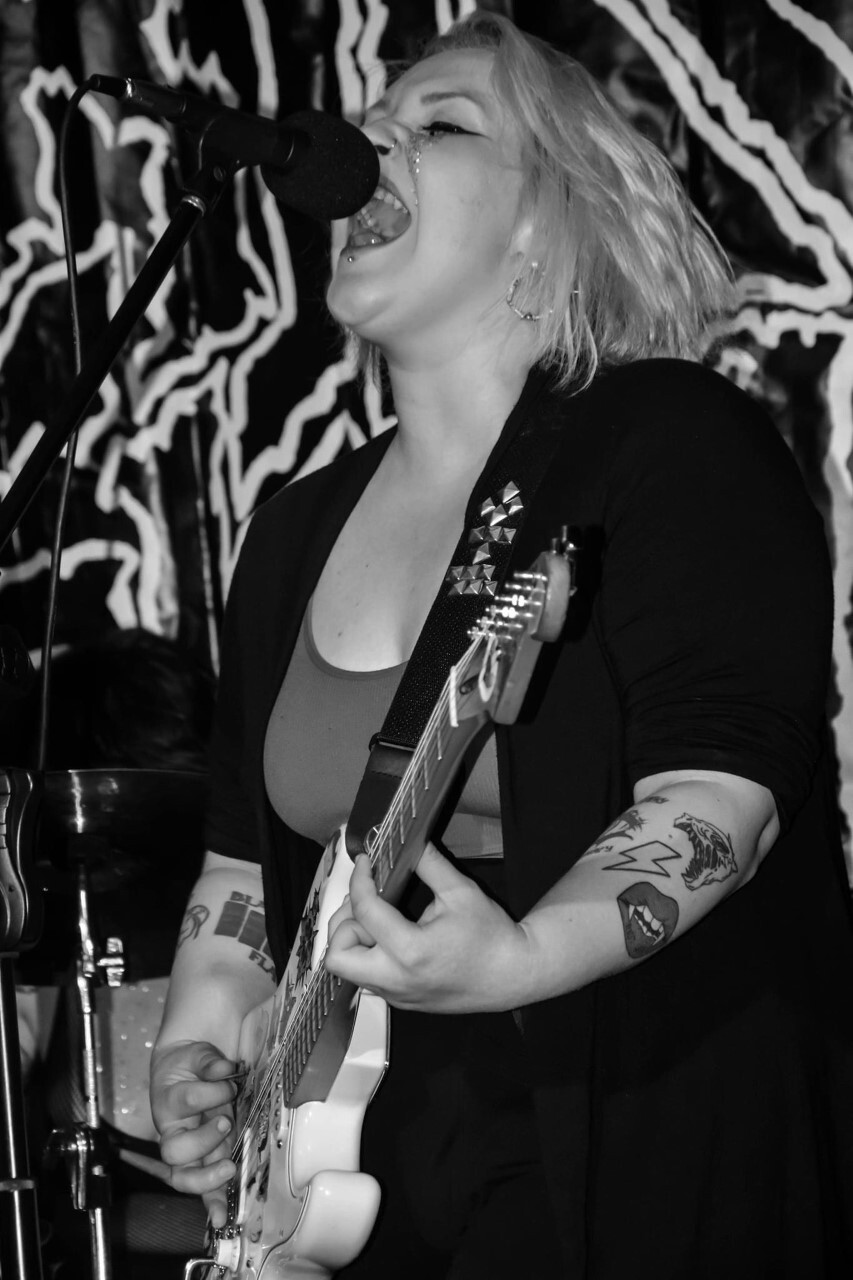 Marianna Navrotskaya is one of the members of Death Pill, an all-female Ukrainian punk band.

According to Death Pill’s Bandcamp page, all funds collected from the sale of the song will be donated to the Ukrainian army.

Right now the three members of Death Pill have scattered away from Kyiv. Navrotskaya said she is in the Carpathian mountains of Ukraine. One of her bandmates is making her way to Spain, while the other fled to Poland.

Death Pill describe themselves as old-school hardcore in the riot grrrl vein. When the band formed in 2017, Navrotskaya knew of no other all-female bands in Ukraine.

“Five years ago when we started playing there were no active girl groups. But now there are, and there are many!” she said. “I really hope that we will serve as an inspiration for at least one girl. If this comes true, then my mission on this Earth is complete!”

She ended her text: “hahaha.”

The benefit album Band Together is available as digital downloads from its Bandcamp page. Chakras said he is currently looking into creating a cassette release of the songs.