These are examples of brochures passed out at Undefeated Courage's van.

Groups in Pennsylvania are touting abortion pill reversal. Doctors are concerned, because there’s no evidence it works

The Association of Obstetricians and Gynecologists calls abortion pill reversal “unethical” and “not based on science.” 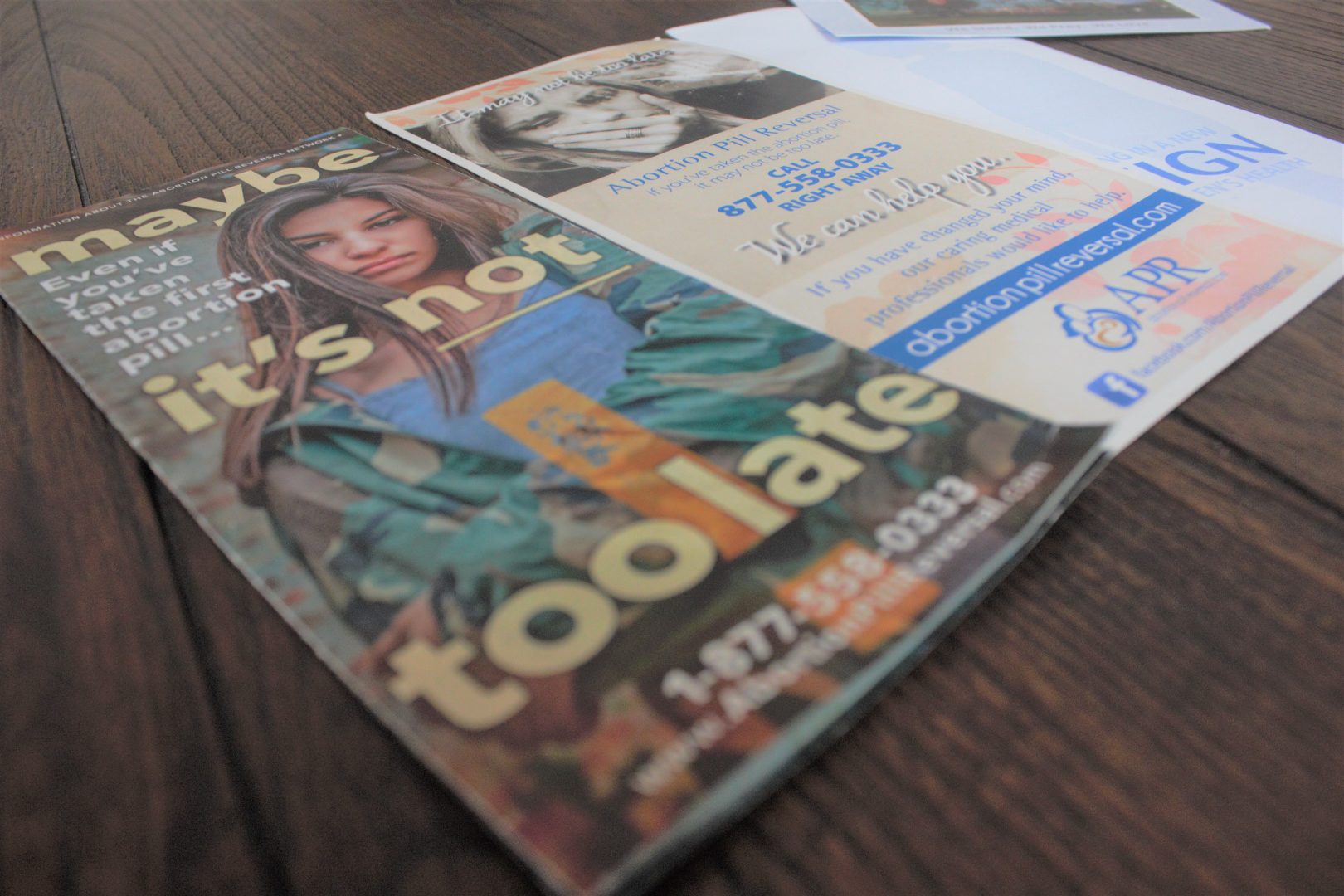 These are examples of brochures passed out at Undefeated Courage's van.

Note: The story was updated to include a response from George Delgado regarding IRB approval of his research.

(Harrisburg)- Every Thursday, a blue van that advertises “free ultrasounds” parks in front of the Planned Parenthood clinic in Harrisburg.

An ad on a door says: “Good News! The abortion pill can be reversed” and that people can text “Hope” for more information. The text returns a link to nationwide hotline run by the Abortion Pill Rescue Network, which connects patients to crisis pregnancy centers or doctors who offer abortion pill reversal.

It has become a featured message for anti-abortion groups such as the National Institute of Family and Life Advocates, the American Pregnancy Association and The American Association of Pro-Life OBGYNS. Crisis pregnancy centers across the country are advertising and offering the treatment.

And an anti-abortion group called Undefeated Courage fund-raised to buy the van that touts the treatment outside Planned Parenthood offices in York and Harrisburg.

Despite the claims on the van’s door, however, there’s no evidence that the treatment works. The Association of Obstetricians and Gynecologists calls abortion pill reversal “unethical” and “not based on science.” 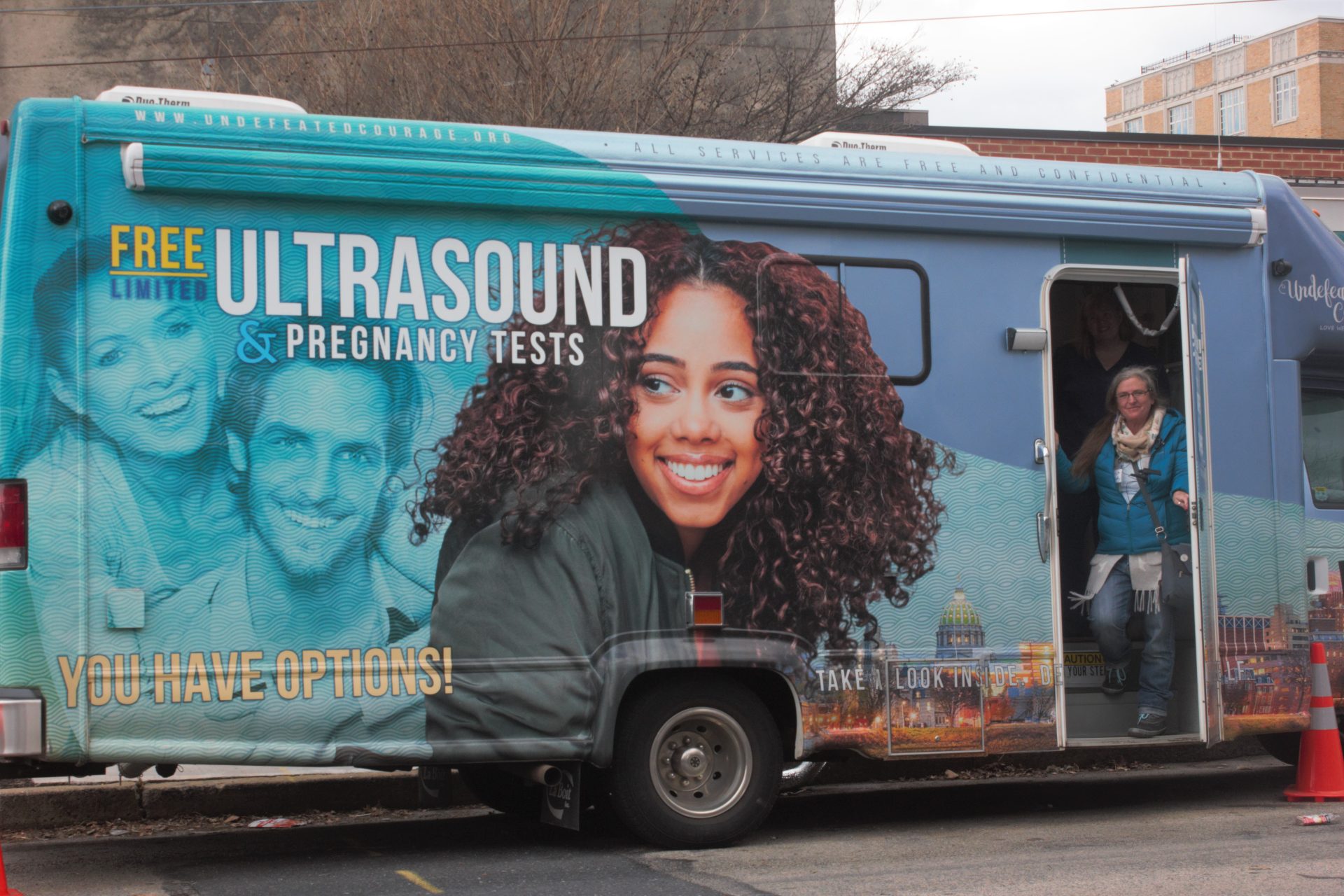 Becky Biter poses looking out from Undefeated Courage’s mobile ultrasound unit that parks in front of the Planned Parenthood clinic in Harrisburg.

But each Thursday, women or couples going into Planned Parenthood in Harrisburg will hear a different story. One day in February, volunteer Steve Ciccocioppo – pronounced chick-ee-chop – stood outside the van equipped with a bright yellow traffic vest and a stack of brochures from the Pennsylvania Pro-Life Federation.

He spotted a young couple being led into the clinic by escorts, and called out.

“Hi, young lady–hi, guys! Would you please come on board our ultrasound van here? You can  see a live ultrasound of your baby.”

The couple did not respond and went into the clinic.

Ciccocioppo didn’t know why the couple was visiting Planned Parenthood, which offers health services other than abortion. But if he talks to someone leaving the building who he believes has taken a medical abortion pill, he’ll tell them that they have another option.

Medical abortions account for more than half of all abortions in the US, according to Guttmacher Institute, an abortion rights organization.

Inside Undefeated Courage’s van, patients are offered ultrasounds and can get more information on how to seek abortion pill reversal, and where they can go. 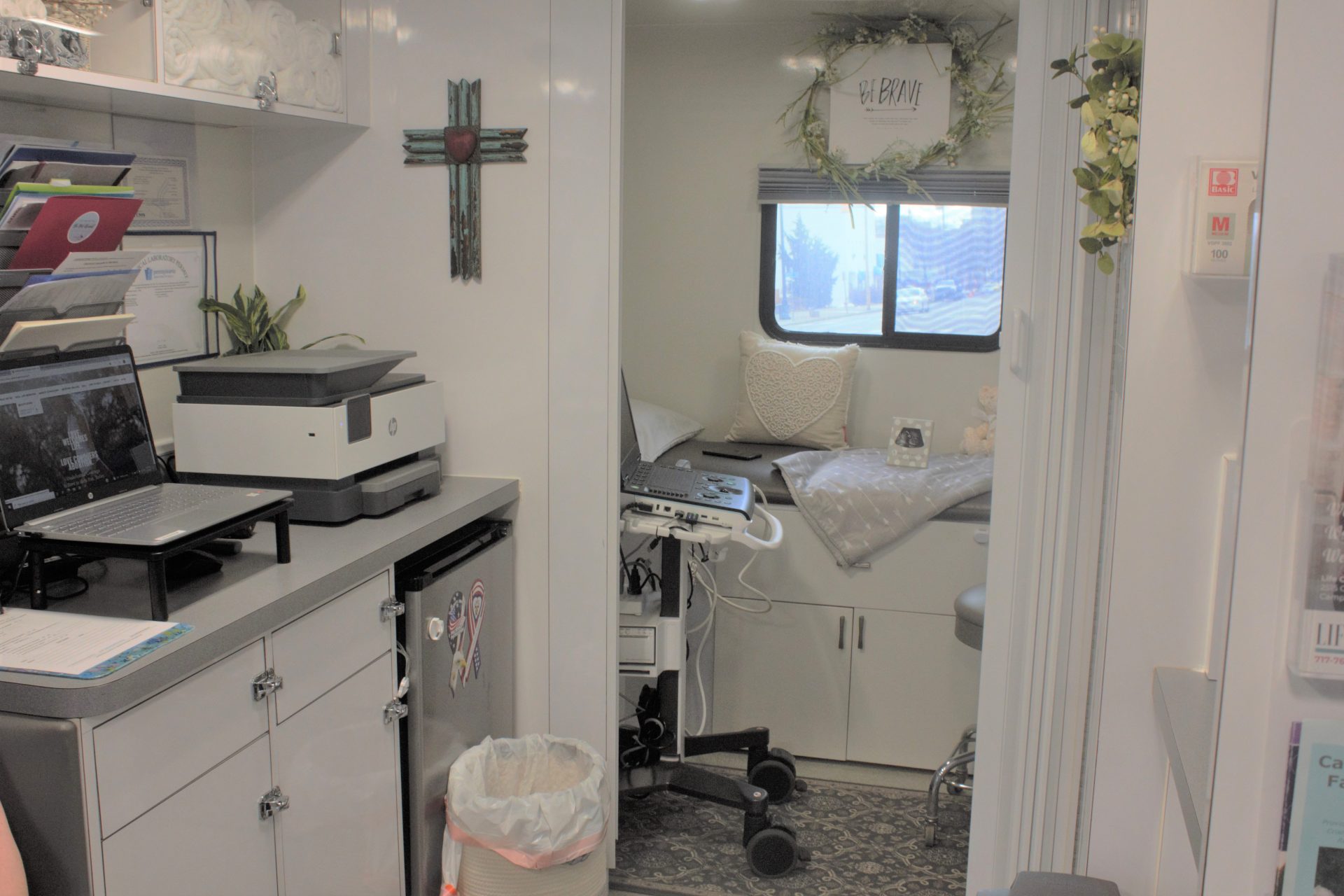 “Typically it’s physicians that are already in place in the OBGYN networks in the different clinics,” said Becky Biter, founder of Undefeated Courage. “There are several in this local area  that will do an APR.”

Biter said they document the number of women who go into Harrisburg’s Planned Parenthood clinic every Thursday, and track what race the women are and other demographic information. She says the group needs that data to know which community to serve. 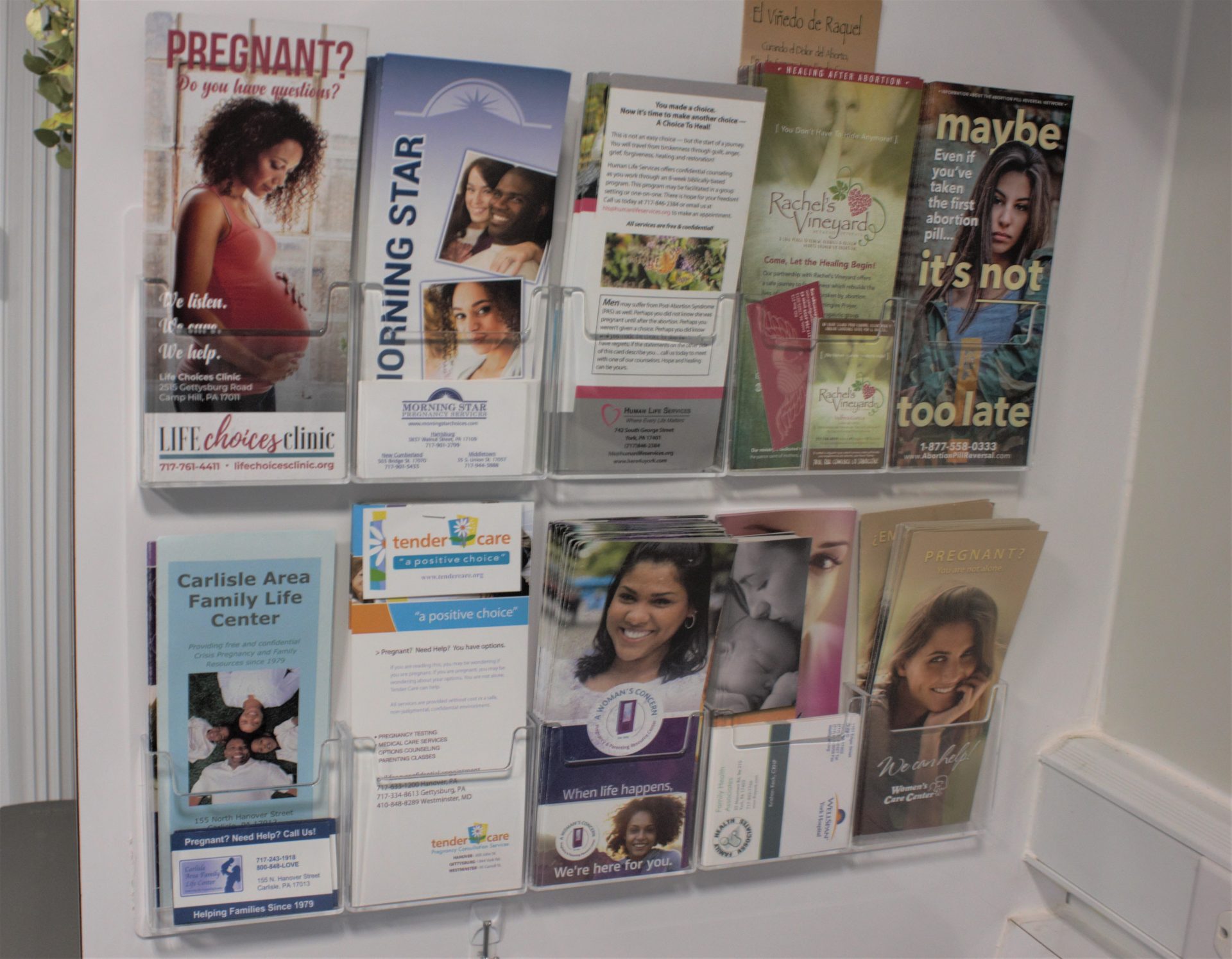 Shakia Evans, manager of the Planned Parenthood clinic in Harrisburg, says the appearance of the van earlier this year has been disruptive for some patients.

“It’s deterring and they feel like they’re being judged before they even get to us,” Evans said.

Daniel Grossman, professor of obstetrics, gynecology and reproductive sciences at the University of California, San Francisco, began researching the treatment in 2015 after he heard of a bill that was introduced in Arkansas that would require doctors to tell patients about abortion pill reversal.

But researchers and physicians say the lack of scientific evidence that the treatment works is concerning, in part because they don’t know whether it could affect the health of women taking it, and in part because it’s making a promise that hasn’t been proven.

Grossman reviewed studies and says he has not been able to determine if progesterone can undo the effects of mifepristone.

“We know that mifepristone used by itself is not a very good abortion inducing drug, so really, to get the high effectiveness that we see with medication abortion, you have to take the second medicine as well,” he said. Grossman says that mifepristone “binds more tightly” to the hormone receptor itself. “It’s not clear that just adding more progesterone would make a difference.”

Anti-abortion groups often cite a 2018 paper reporting that about half of 547 women who had taken mifepristone, and then high doses of progesterone, had successful pregnancies. The research was led by George Delgado, who is a medical advisor for the Abortion Pill Rescue Network.

The 2018 paper was published in a journal co-sponsored by the Watson Bowes Research Institute, which is focused on anti-abortion issues.

Grossman and other medical researchers say that research is not reliable. In an issue brief, they noted that some of the clinicians used an ultrasound to pre-screen patients, and only women who clearly had an ongoing pregnancy were given progesterone. Patients with a continuing pregnancy 1-2 days after mifepristone are more likely to have continuing pregnancies, so the pre-selection of patients “inflates the success rate” of the abortion reversal treatment, according to the brief.

The Association of Obstetricians and Gynecologists cites other flaws in Delgado’s paper, including the lack of control groups for comparison, and small sample sizes. Medical experts also note that Delgado’s study did not meet clinical standards for reasons including that it was not supervised by an institutional review board, or IRB. An institutional review board is a committee that vets and monitors research that involves human subjects.

Delgado said the paper ultimately received an IRB approval after the data was collected. The IRB approved their “taking de-identified data and analyzing it,” he said.

Delgado says he plans to do a randomized controlled study in the future – but he is unwilling to have a placebo group for comparison.

“It would be unethical to have a placebo group because these are women who want reversal. And none of them are going to want to be in a placebo group,” Delgado said.

In 2019, a team researchers from the University of California, Davis, tried to study abortion pill reversal in a way that met scientific standards and was approved by an IRB. The study set out to include 40 participants, but researchers stopped when three women had severe bleeding. Two had taken a placebo, and one had taken progesterone.

Dr. Mitchell Creinin, the lead researcher, says the study was not able to prove whether the treatment works. But he said the experience raised concerns about the safety of using the first medical abortion pill without the second one.

“We need accurate information to tell them what to expect – not to give them a treatment and saying, ‘Well, this can help you,’ without even knowing if it really does, or possibly even could make things worse,” Creinin said.

Nisha Verma, an OBGYN and fellow at the Association of Obstetricians and Gynecologists, says advocating for a treatment that is not evidence-based conflicts with what the medical profession stands for — including giving accurate, evidence-based information to patients.

“There’s not even an assessment of how often this is happening, what’s happening to the people that are targeted and that take it,” said Tara Murtha, co-author of the report and director of communications for the Women’s Law Project. “I haven’t yet seen any real, meaningful attempt to hold CPCs accountable for this practice.”

The Women’s Choice Network is one of the crisis pregnancy centers in Pittsburgh that offers abortion pill reversal. Amy Scheuring, the center’s executive director, testified in favor of the treatment last year before the state House Health Committee.

Scheuring says “no promises are made” to patients, but says there’s no harm in telling people about the treatment.

Heartbeat International, the organization that runs the Abortion Pill Rescue Network, said that last year, more than 1,600 women started reversal through their network. Christa Brown, director of medical impact, said that the numbers have increased in Pennsylvania – from 25 in 2020 to 47 in 2021.

Brown said a reversal start occurs when a woman receives a referral to a provider and the provider determines the patient is a candidate for abortion pill reversal. “If we later learn that she ultimately did not start treatment, her case is no longer considered a reversal ‘start,’” Brown said.

The Pennsylvania state legislature hasn’t taken up an abortion pill reversal law, although Rep. Kathy Rapp of Warren County convened a hearing last April  before the House Health Committee. Proponents of abortion pill reversal, such as Eric Hussar, a physician with Penn Medicine Lancaster General Health, testified at that hearing.

Democratic Representative Mary Jo Daley (D-Montgomery), says the Women’s Health Caucus, which advocates for reproductive rights, is aware of the treatment and is researching ways to tackle misinformation regarding reversing abortions.

“We are looking into legislation on that,” Daley said. “We have our staff looking at that and researching what other states might be doing and what we could be doing. Because it is a concern.”

How advances in heart imaging can help improve diagnoses