File photo: Parents and students from the Downingtown and West Chester, Pa., School Districts held a roadside protest Monday to demand administrators allow in-person learning for families that want it.

5 Democrats on the school board were immediately removed from office. 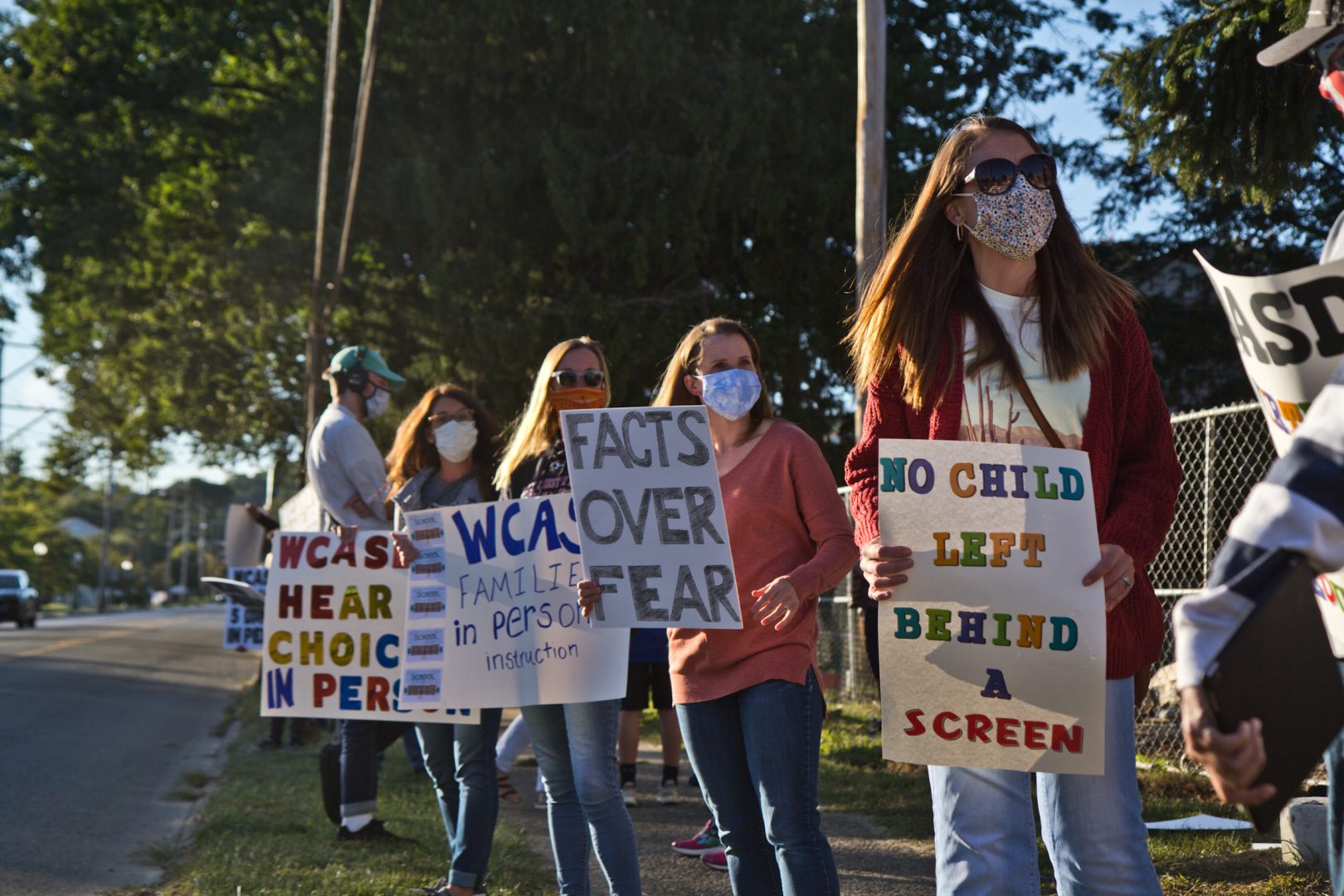 File photo: Parents and students from the Downingtown and West Chester, Pa., School Districts held a roadside protest Monday to demand administrators allow in-person learning for families that want it.

A monthslong dispute over masks in a Chester County school district culminated Tuesday in a judge ordering all five Democrats on the school board to be immediately removed from office.

The order stemmed from a petition a parent in the West Chester Area School District filed in February, asking the Chester County Court of Common Pleas to remove the school board members on the grounds that they had voted in August 2021 to make masks mandatory in the district’s schools.

Kenneth Roos, an attorney at Wisler Pearlstine LLP, which is representing the board members, told WHYY News Tuesday night that they would be filing a motion to reconsider.

The parent petitioner, Beth Ann Rosica, argued that under the Pennsylvania school code, districts have no authority to require all students to wear masks.

After Pennsylvania’s state of emergency first ended in June 2021, the board opted to continue requiring masks. It stood by that decision while the state reimposed a school mask mandate, and for two months after the Pennsylvania Supreme Court declared that mandate unconstitutional in December.

“Once the Supreme Court declared that was unconstitutional … we implored our school board, we asked and asked and begged and pleaded and made comments to lift the mask mandate, and they refused,” Rosica said. “When they refused, that is when we made the decision to file the petition.”

The strength of Rosica’s argument appears to have had little to do with its success, however.

In his order that the five Democratic members of the board be “removed from office,” Judge William Mahon wrote that his decision came after there was “no response” to the petition by the school district or its counsel.

Attorneys for the district declined to say whether they had missed a deadline. District leaders and the apparently ousted school board members also did not respond to requests for comment.

Mahon gave both parties to the case — Rosica and the district — seven days to submit their recommendations for replacement board members. He will make the final determination about who is appointed.

Rosica is a well-known figure in the world of Pennsylvania school board conflicts, which have mounted in the two years since COVID-19 initially shut down schools.

She serves as executive director of Back to School PA, a PAC funded by a Bucks County venture capitalist that undertook a massive statewide spending campaign in 2021 in an effort to elect mostly conservative candidates to school boards.

Her petition in West Chester isn’t an isolated effort.

Rosica said four other Chester County school districts — Downingtown, Tredyffrin/Easttown, Great Valley, and Coatesville — have also filed similar petitions. Judges haven’t ruled on them yet, but Shannon Grady, a Downingtown parent and the original drafter of the petition language, said she has high hopes.

All the petitions are built on a little-known 1949 provision in the Pennsylvania School Code, which says that if a board of directors “refuse or neglect to perform any duty imposed upon it,” any 10 residents of the district can file for their removal.

Grady, who said she couldn’t find any case law showing that the provision had been used in the past, said she sees her petition as a template for other parents who believe their school boards have overreached by attempting to set public health mandates.

“I’ve shared it with people from around the state already, because all the [relevant] codes are Pennsylvania state codes,” she said. “I’m not trying to ruin school board members’ lives or sue them for money. It’s just, know your place.”

Tensions had been high in the West Chester Area School District for months.

Ahead of school board elections in November 2021, and amid rising tension over parents’ rights to dictate how schools are run, the West Chester district got national attention when the then-president of the board, a Republican, cut a conservative parent’s microphone as she spoke about critical race theory. He eventually called for an officer to escort her out of the meeting as she continued yelling.

The parent, Anita Edgarian, later mounted a write-in campaign for school board. She was one of several conservative candidates running on a platform that broadly reflected national debates, including a push to roll back COVID-19 mitigation efforts, get rid of masks, and bar curricula thought to be related to critical race theory.

That slate of candidates was one of several dozen in school boards across Pennsylvania that got at least $10,000 from Back to School PA — much more than is usually spent in school board races.

In West Chester, the money — and the parents’ choice arguments it supported — appears to have had limited effect. Heading into the 2021 election, Republicans controlled the board, 5-4. But while one GOP candidate snagged a seat, two others on the slate backed by Rosica and Back to School PA lost.

Three Democrats won, flipping the board to 6-3 Democratic control.

On Monday, the board voted, 8-1, during an impassioned four-hour meeting to keep “Gender Queer: A Memoir” on school libraries’ shelves. Privacy concerns in the district had been growing following a February request for data on LGBTQ children in the district. That Right to Know Law request was largely denied by the district.

After maintaining a mandatory masking policy for two months after the state’s school mask requirement was declared unconstitutional, the district ended its mandate at the end of February, citing plummeting COVID-19 case rates.

But for Grady, that’s not a reason to call off the quest to oust board members. West Chester, she noted, always left open the possibility of reinstating masking if cases rose again.

She wants a harder line in the sand than that.

Workers are fed up, and that’s a good sign for unions, national labor leader says in Pittsburgh