The smoky aftermath of a massive pile-up during a snow squall March 28, 2022, on Interstate 81 North in Schuylkill County, Pennsylvania.

The crash involved between 40 and 60 vehicles. 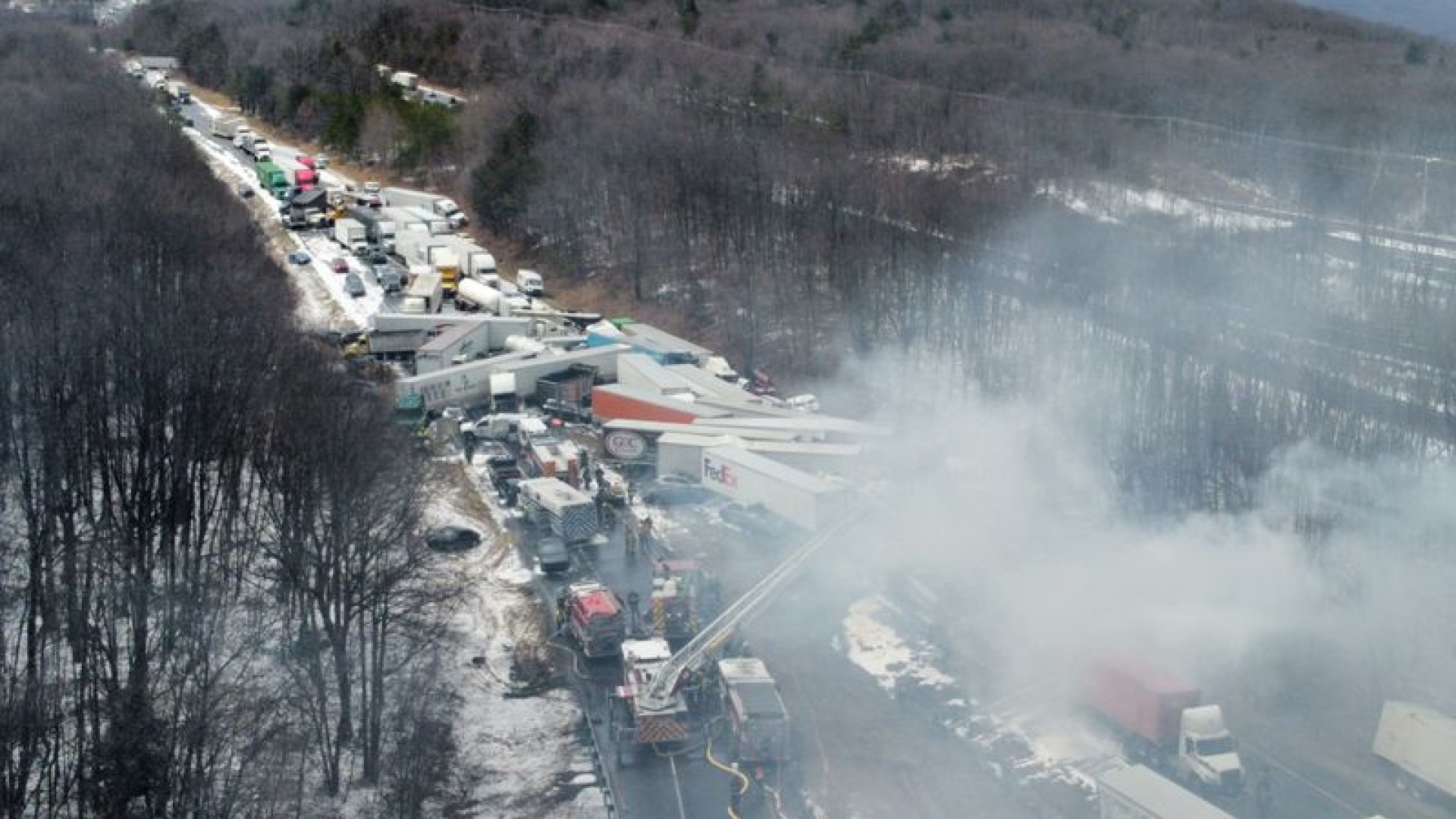 The smoky aftermath of a massive pile-up during a snow squall March 28, 2022, on Interstate 81 North in Schuylkill County, Pennsylvania.

(Pottsville) — A stretch of an interstate highway in Pennsylvania remained shuttered Tuesday, a day after at least three people were killed and more than a dozen others injured when tractor-trailers and other vehicles lost control and slammed into each other during a snow squall.

Around 3 p.m. on Monday, Deputy Coroner Al Barnes said three people died in the crash, but added that the number could rise. As of 10 p.m., the Pottsville Republican Herald said there were five fatalities.

Interstate 81 north remained closed Tuesday afternoon following the wreck Monday morning amid poor visibility that involved between 40 and 60 vehicles, authorities said. State police said no update on the number of fatalities was expected before Wednesday.

The crash Monday on Interstate 81 was captured in videos posted on social media that showed drivers and passengers lining the snowy road and jumping out of the way as the cascade of crashes unfolded. The north and southbound lanes of the highway were closed for several hours after the accident, but the southbound side reopened around 6:30 p.m. Monday. It was not known when the northbound side would reopen.

Numerous vehicles remained on the roadway in the northbound lanes early Tuesday, authorities said. Some vehicles were mostly burned and others melted onto the highway, and authorities said they needed to go through each vehicle to make sure there are no human remains.

Trooper David Beohm of the Pennsylvania State Police said Tuesday afternoon that after the highway was cleared, the state transportation department would have to check the highway to determine whether road repairs would be needed before traffic could be allowed to resume.

He said three of the tractor-trailers involved no longer had their tractor portions and one didn’t have tires because they were consumed in the fire. That poses, he said, “some challenges as to how you’re going to move that stuff — not that the tow guys aren’t up to to the task, but it takes time.”

After the larger vehicles are removed and the road is cleared of debris, Pennsylvania Department of Transportation crews will need to remove a layer of the road surface due to spilled liquids such as fuel and oil from the crashed vehicles, PennDOT spokesperson Ronald Young said Tuesday afternoon.

“While the majority of the liquids have or will be remediated, there may still be small amounts on the road surface or even in the top layer of the asphalt,” Young said. Officials hoped the road could be reopened late Tuesday night, he said.

Estimates of the number of vehicles involved from the emergency management agency and state police ranged between 40 and 60, and Boehm said an exact total may not be known for a number of days.

Dr. David J. Moylan, the Schuylkill County coroner, has said three fatalities have been confirmed and that number could rise. A Pennsylvania State Police incident report noted 24 people were taken to four hospitals. People who could get out of their vehicles and walk were taken by buses to a Wegmans Distribution Center and then to Good Will Fire Company in Minersville serving as a reunification center, according to the report.

In one video, an out of control tractor-trailer smashed into a large dump truck turning it nearly 180 degrees, another large truck caught fire and spewed black smoke into the air, and an SUV struck a passenger car sending it spinning narrowly past a person standing on the shoulder in snow and fog.