Demonstrators at a rally last year about the state's unemployment backlog.

Tens of thousands of unemployment claims remain unresolved, according to state data. 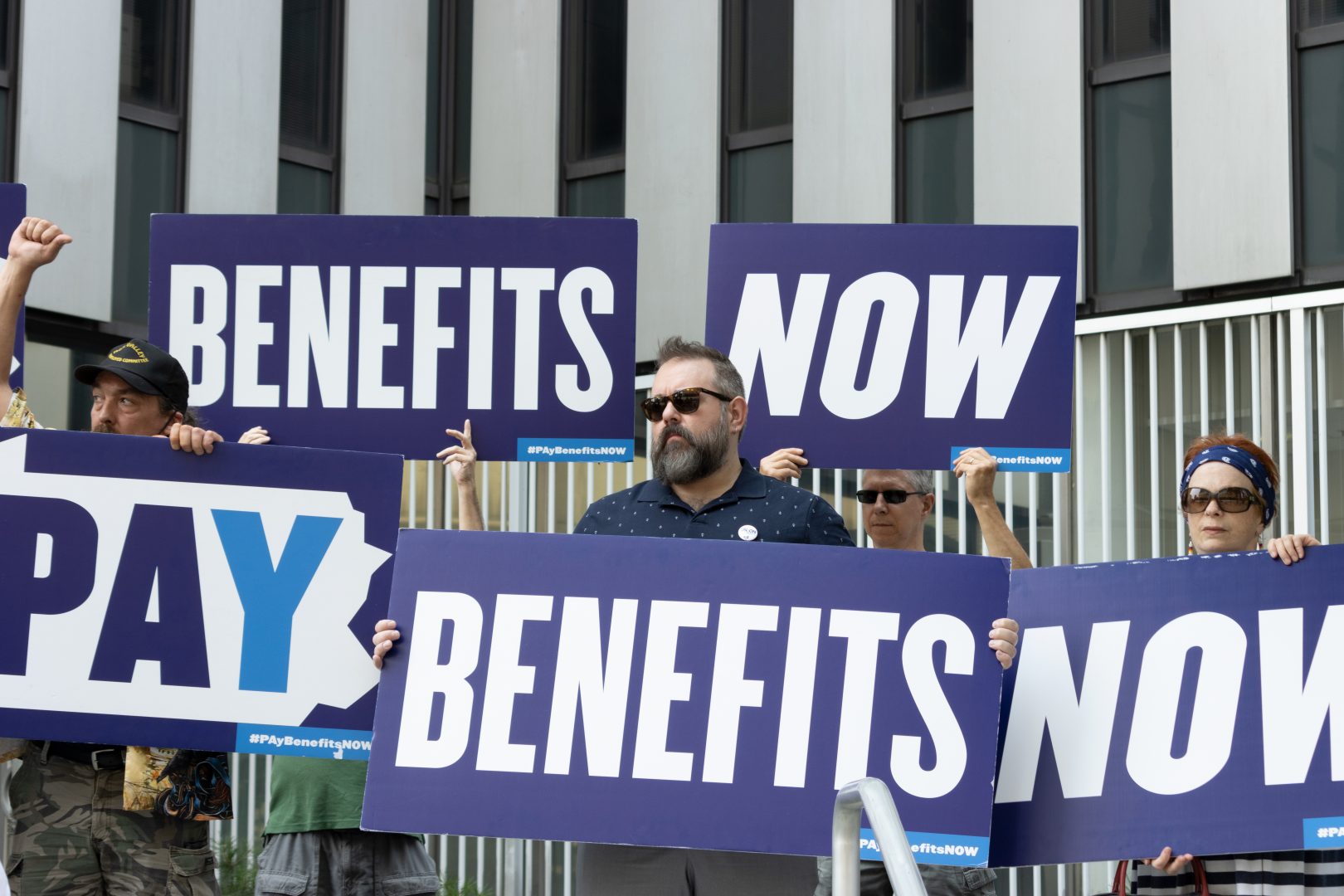 Demonstrators at a rally last year about the state's unemployment backlog.

Tens of thousands of claims remain unresolved, according to state data.

The ongoing backlog, as well as the system’s persistent problems with fraud, dominated a state House budget hearing in Harrisburg earlier this month.

“My legislative staff spends more than half of their day fielding calls regarding unemployment claims. Most of the calls are complaints that months have gone by where somebody has filed a claim and no funds are being received,” said state Rep. Natalie Mihalek, speaking during the House Appropriations Committee hearing. The Republican from Upper St. Clair was one of a number of legislators from both parties who complained to the state Secretary of Labor and Industry about the department’s ongoing difficulties.

“This is an abysmal failure and a stain on this Commonwealth,” Mihalek said.

Backlog numbers have declined from their peak last summer — they’re now just under 47,000, but at their high point last year were more than 300,000.

Claimants caught in the backlog have gone months without income in some cases and faced major financial hardship while waiting to be paid.

In addition to complex rules about who is eligible for unemployment, advocates and state officials said, part of the problem is a chronic shortage of trained examiners — the Department of Labor and Industry employees who work to gather information from claimants and their former employers and decide if an out-of-work Pennsylvanian is entitled under the law to the benefits for which they have applied.

The state currently has 218 examiners, up from about 183 at the start of the pandemic — but it has roughly 80 vacant interviewer positions. State Labor and Industry officials have said they are in the process of internally working to promote other workers to fill these roles.

At a meeting late last year to review the department’s long-awaited, multi-million-dollar computer system upgrade, a union official said the technology improvement will be for nothing without proper staff.

“I know the department is busting its butt to try to fill these positions. It’s hard out there in the market right now, but like, at the end of the day, these positions need to be filled for … this system and this whole kind of ecology to work,” said Steve Catanese, president of the Service Employees International Union Local 668, which represents workers at the Department of Labor and Industry.

Understaffing in general has long been a problem for the agency.

In the past decade, it faced multiple rounds of layoffs of hundreds of employees at a time — in 2012-13 and late 2016 because of funding issues.

Generally speaking, UC benefits are financed through payroll taxes paid by Pennsylvania employers and workers, and the UC system is financed primarily with federal funds. However, “the federal funding is basically inadequate and has been for decades,” said Sharon Dietrich, litigation director for Community Legal Services of Philadelphia, though it has at times been supplemented with temporary state funds.

“Historically, staffing shortages have been a chronic issue for UC, even in ‘good’ times,” former Labor and Industry Secretary Jerry Oleksiak testified to state lawmakers in October 2020.

“One of the biggest and most persistent bottlenecks in our processes stems from the lack of examiners we have on hand to issue determinations,” he said during the same hearing.

Shortly after taking over the agency in January 2021, current Secretary Jennifer Berrier told legislators the same — that the agency’s staffing problems were directly tied to its large case backlog.

Part of the problem is that examiners essentially can’t be hired off the street. They must come from within the agency’s own ranks — which have thinned through the years — and bring at least one year of experience as a UC interviewer.

“Only highly trained and qualified examiners — on average, they have about 8.5 years of service with [Labor and Industry] — can perform this role, as each case must be carefully assessed based on its own unique merits and in accordance with the eligibility requirements as outlined in UC law. Examiners have the unique and difficult responsibility to uphold and make determinations based on the laws that the federal government and the Pennsylvania General Assembly have put in place,” Berrier explained last year.

Earlier this month, Berrier told lawmakers for the agency to be able to “fully operate and provide excellent customer service,” it needs about 2,000 total staff. It has roughly 950 people currently, she said.

When federal pandemic benefits expired in September, Berrier said, so did some funding to help with staffing.

“All those individuals who we were borrowing from other agencies and contractors we were using, we could no longer use them to process actual claims. We had to basically give back those resources to the departments we were borrowing from and then use our contractors in other ways that unfortunately weren’t able to help us with processing claims,” Berrier told legislators.

At this month’s House Appropriations hearing, several Democratic legislators brought up a 2016 effort led by a Republican state Senator that allowed supplemental state funding for the unemployment system to lapse. Appropriations Chairman Stan Saylor, a York County Republican, shot back that the Democratic Wolf administration hasn’t asked for more funding.

“There were no requests over the last several years from the administration to increase funding in those areas. So, I want to make that clear. It’s easy to blame the General Assembly for what happened five, six years ago. But you can’t just shift it onto the General Assembly without taking blame on the administration for not requesting additional dollars in the budgets of the last several years,” Saylor said.

Democrat Matt Bradford countered the Republican-controlled chamber has done nothing to advance House Bill 549, which would simplify and streamline some aspects of the state’s unemployment compensation program.

“For many claimants, this is a very traumatic time for them and their families; our staff recognizes and appreciates the very real impacts the outcome of a determination can have,” Alex Peterson, press secretary for the agency wrote in an email. “Our examiners take this responsibility seriously. Unfortunately, the stress of making these types of determinations can be a deterrent to a lot of staff when it comes to promotions …. It’s an incredibly stressful and complex job, one that requires a lot from our workers on a daily basis.”

One long-time examiner for the department was blunter. He asked to not be identified because he was not authorized to discuss the issue publicly.

“The last two years have destroyed people,” he said.

Inside Pennsylvania candidates’ scramble to get on the ballot in a chaotic, must-win year