Villanova head coach Jay Wright leaves the court after their win against Houston during a college basketball game in the Elite Eight round of the NCAA tournament on Saturday, March 26, 2022, in San Antonio. (AP Photo/Eric Gay) 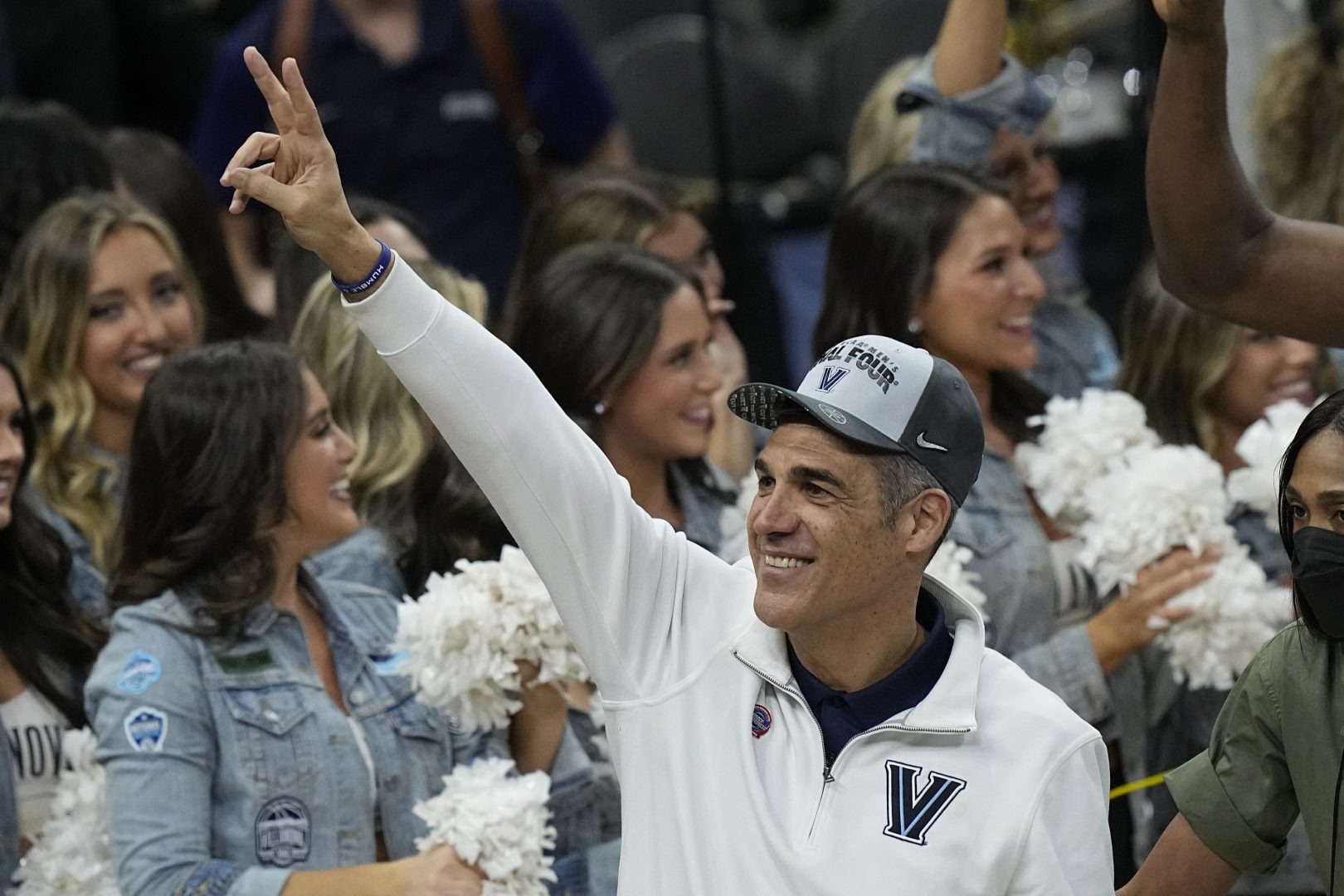 Villanova head coach Jay Wright leaves the court after their win against Houston during a college basketball game in the Elite Eight round of the NCAA tournament on Saturday, March 26, 2022, in San Antonio. (AP Photo/Eric Gay)

(San Antonio) — Villanova coach Jay Wright has won national championships with well-balanced and fundamentally sound teams, yet even he knew staying in contention for another title was going to take a rugged and exhaustive effort.

Ugly at times, the final result was beautiful for the Wildcats, who are going to their third Final Four in the past six NCAA Tournaments.

Jermaine Samuels had 16 points and 10 rebounds as Villanova grinded out a 50-44 victory over gritty and athletic Houston team in the South Region final Saturday.

Caleb Daniels added 14 points for the Wildcats (30-7), and fifth-year senior Collin Gillespie’s only made field goal was a clutch shot late, even though Villanova led throughout to clinch the first spot in this year’s Final Four in New Orleans.

“It was like playing against our own selves. They were just as physical as we were,” Daniels said. “It was a literal street fight, every possession trying to get a rebound.”

Villanova shot 28.8% from the field (15 of 52). The Cougars were only slightly better at 29.8% (17 of 57), missing their last five shots and 10 of 11 overall after cutting an 11-point second-half deficit to two. They made only one of their of 20 attempted 3-pointers in their lowest-scoring NCAA tourney game ever.

“We had it turned, we kept getting stops. We were getting stop, stop stop, we just weren’t scoring on the other end,” Houston coach Kelvin Sampson said. “I remember telling them in the huddle, I think it was a four-point game there … and we kept getting stops that somebody’s going to make a big shot. But we didn’t. Credit Villanova.”

The Wildcats, seeing their fourth championship overall, will play either Kansas, the only No. 1 seed remaining, or 10th-seeded Miami in a national semifinal next Saturday. They have won two championships in Wright’s 22 seasons, in 2016 and 2018.

Taze Moore had 15 points and 10 rebounds for the Cougars (32-6), who were denied making consecutive Final Four appearances for the first time since 1982-84 during the Phil Slama Jama era. The starting five was completely changed from last season, including Moore and two other senior newcomers.

After Villanova missed three shots on the same possession — and was still without any second-chance points in the game — Moore got the long rebound on the break. After initially slowing things down, Moore scored on a drive against Gillespie, getting Houston within 42-40 with 5:25 left.

It was the closest the Cougars had been in the game at AT&T Center, only about 200 miles from their campus, and the crowd was in a frenzy when Wright called timeout. Houston never got a chance to take the lead.

Gillespie, who played in the championship game for the Wildcats in 2018, was 1-of-6 shooting. But his only field goal came on the possession after the timeout when he waved off Samuels, stepped inside the 3-point line and hit a jumper with 5:02 left.

“It was an in-the-moment decision. They were soft-blitzing me basically the whole game. That time they just happened to switch,” Gillespie said. “So I wanted Jermaine to go down into the post. I had a mismatch … then Jermaine had a guard on him so he could rebound.”

There was a nearly two-minute scoring drought before Justin Moore made two free throws — the Wildcats were a perfect 15-of-15 from the line. A foul by J’Wan Roberts bailed them out with the shot clock about to run out. Those were Villanova’s first and only second-chance points.

Villanova had scored the first five points of the game, including a 3-pointer by Samuels on the first shot.

Samuels was also on that 2018 title team as a freshman with Gillespie, but the 6-foot-7 forward logged only one minute total while making late-game appearances in those two Final Four games.

As a senior, Samuels goes into the Final Four after being named MVP of the South Region. He is averaging 17.5 points a game in this NCAA tourney — so far.

Justin Moore suffered a lower leg injury in the final minute of the game and was on crutches during the Wildcats’ postgame celebration. Moore was dribbling against a defender, and looked like he slipped and fell, then went back down after trying to get up. Initial X-rays showed nothing was broken, but Wright said an MRI was planned and that it didn’t look good for Moore.

Villanova: This is the fourth time in a row that Villanova won when getting to a regional final and advanced to the Final Four, following 2009, 2016 and 2018. The Wildcats are 20-3 in NCAA tourney games since 2016. … They are 9-0 in March, their largest winning streak this season, and have won 14 of 15 overall since the first week of February.

Villanova will play against the Midwest Region champion in the national semis. Kansas and Miami play Sunday in Chicago.