People get their orders at the counter of Michelle's Cafe along Main Street, in Clarion, Pa., Saturday, Feb. 12, 2022. ( 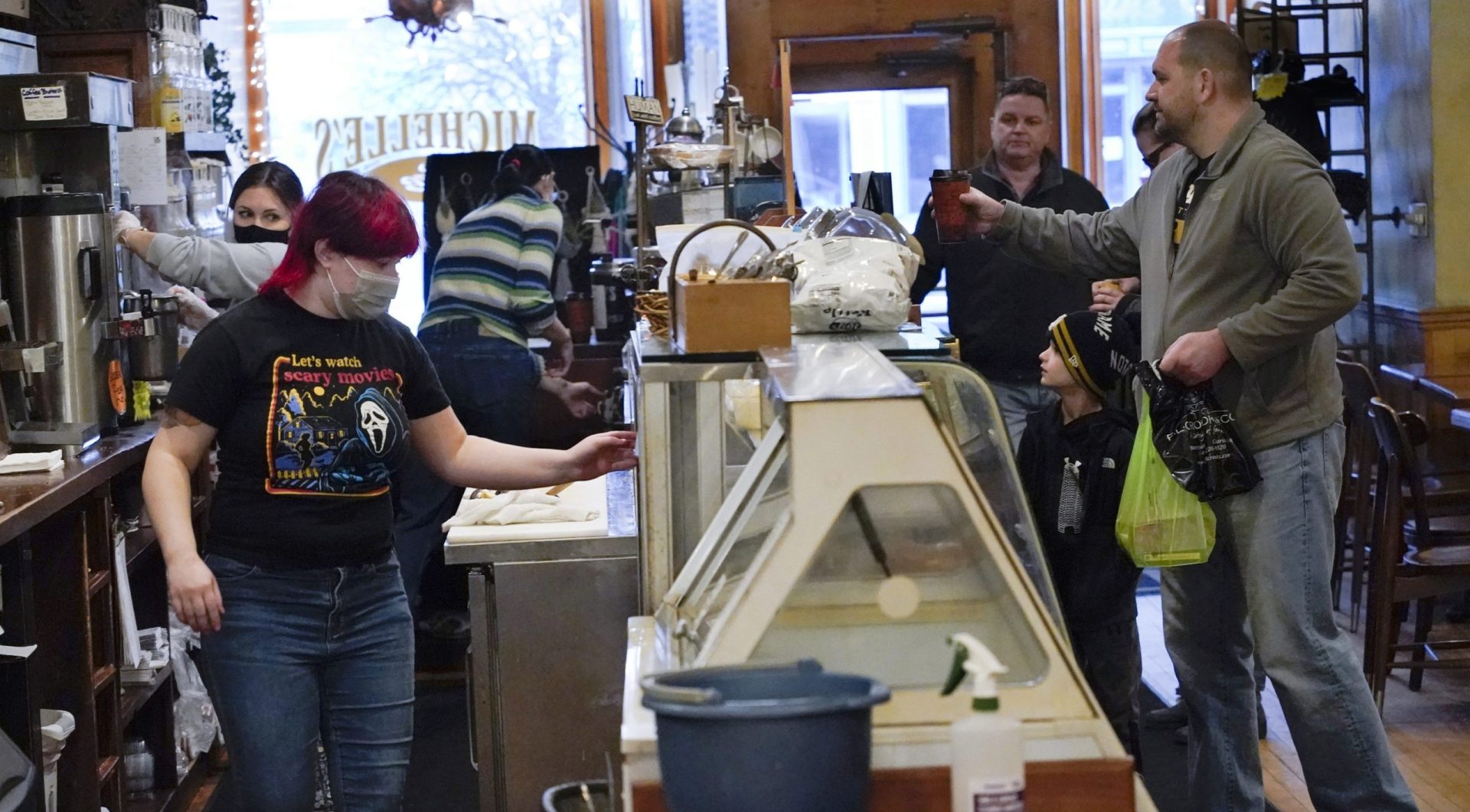 People get their orders at the counter of Michelle's Cafe along Main Street, in Clarion, Pa., Saturday, Feb. 12, 2022. (

(Philadelphia) — Pennsylvania employers can pay tipped workers less than the state’s minimum wage of $7.25 an hour — as little as $2.83 an hour — if they make at least $30 a month in tips.

That threshold will go up quite a bit in the coming months. On March 21, the state raised the monthly tips amount to $135 in a unanimous vote by the Independent Regulatory Review Commission on a proposal by Gov. Tom Wolf’s administration.

Yet workers say the new policy won’t have that much impact. Even with the higher threshold, a person who makes $2.83 an hour and works 20 days out of a month may still make only about $25 a day in tips and wages before taxes.

Palmer Marinelli, an organizer with the labor advocacy group Pennsylvania Food Workers, called the change “a totally meaningless adjustment that is pretty insulting.”

“We know they’re doing it because it’s all that they can do,” said Marinelli. “But at the same time, it would probably just behoove all of us to … spend our time only working towards sustainable outcomes.”

Wolf has been trying to boost the minimum wage since he took office in 2015. As part of his 2021 annual budget, the governor proposed an increase for the seventh consecutive year, a plan that included raising the minimum wage until it reaches $15 an hour in 2027. That would catch Pennsylvania up with New Jersey and Delaware. It also would eliminate the existence of a separate, lower wage for tipped workers.

According to the Wolf administration, between 93,000 and 160,000 Pennsylvania workers are paid a tipped minimum wage below $7.25 an hour.

Even $15 an hour is not enough today, many say.

Restaurant workers deserve to not rely on tips to earn a livable wage, Marinelli said.

“If we want to have actual changes into how we can fairly treat people who work in restaurants, then we’re going to have to create some changes to allow people to work in these kinds of places and have meaningful lives out of them,” he said.

For workers to have sustainable careers in the restaurant industry, they need access to retirement plans and health care, Marinelli said.

“You would never think it’s acceptable to only pay your lawyer if you liked the outcome of the trial, which is basically what tipping is,” said Marinelli. “The last myth to dispel is that service work and restaurant work isn’t skilled labor. It is highly skilled labor.”

Another aspect of the new state Department of Labor and Industry regulation says that tipped workers must spend at least 80% of their time on such work to be classified as tipped employees and paid below Pennsylvania’s minimum wage.

Emma Decaprio works as a support server and food runner in a Philadelphia restaurant. Most of their time is spent in an untipped capacity, but they make more money during the fewer hours they earn tips.

Decaprio said the new policy means they might not be considered a tip worker anymore, and could actually earn less money. “That’s really concerning.”

“We always seem to be focused on the wrong thing,” said Decaprio. “A lot of these policies are just ways to avoid the actual problem of providing people a livable wage. It just seems like we’re skirting around the edges.”

Giana Petrasso, 18, works at a diner in Bensalem, Bucks County. She said her pay is inconsistent. Tips make up 35% to 40% of her paycheck, and sometimes she has a slow day, week, or month.

“A lot of restaurants are super understaffed, and people are very impatient and not necessarily empathetic towards it at all,” said Petrasso. So then she sees customers take out their frustrations on the servers, which affects their pay rates.

Still, Petrasso said, the workers at her diner usually make more in tips than $135 a month.

If they only made $135 and were paid at their current hourly wages, around $3 an hour, “[that’s] not livable at all,” she said.

Jason Ross Green is the owner of Jay’s Steaks and Hoagie Joint in Middletown, Bucks County. He said the new policy doesn’t make sense, and that most people in the industry easily make more than $135 in tips a month.

“They’re not going to do the job if they’re not making more than that,” he said.

Regulators are “making [this policy change] sound like it’s great for the people. But it means nothing to the people. It’s just blowing smoke,” said Green.

This year, he said, he introduced an employee profit share: 50% of the profits of the restaurant will be split among his employees.

“They reap the benefits of how it operates,” said Green. He said he also doesn’t pay full time employees below $15 an hour.

“I love my employees, I care about them,” said Green. “We should want to see our employees happy, no matter what industry you’re in.”