North Carolina head coach Hubert Davis reacts during the first half of a college basketball game against UCLA in the Sweet 16 round of the NCAA tournament, Friday, March 25, 2022, in Philadelphia. (AP Photo/Matt Rourke)

If the shoe fits: Love leads Carolina over UCLA into Elite 8 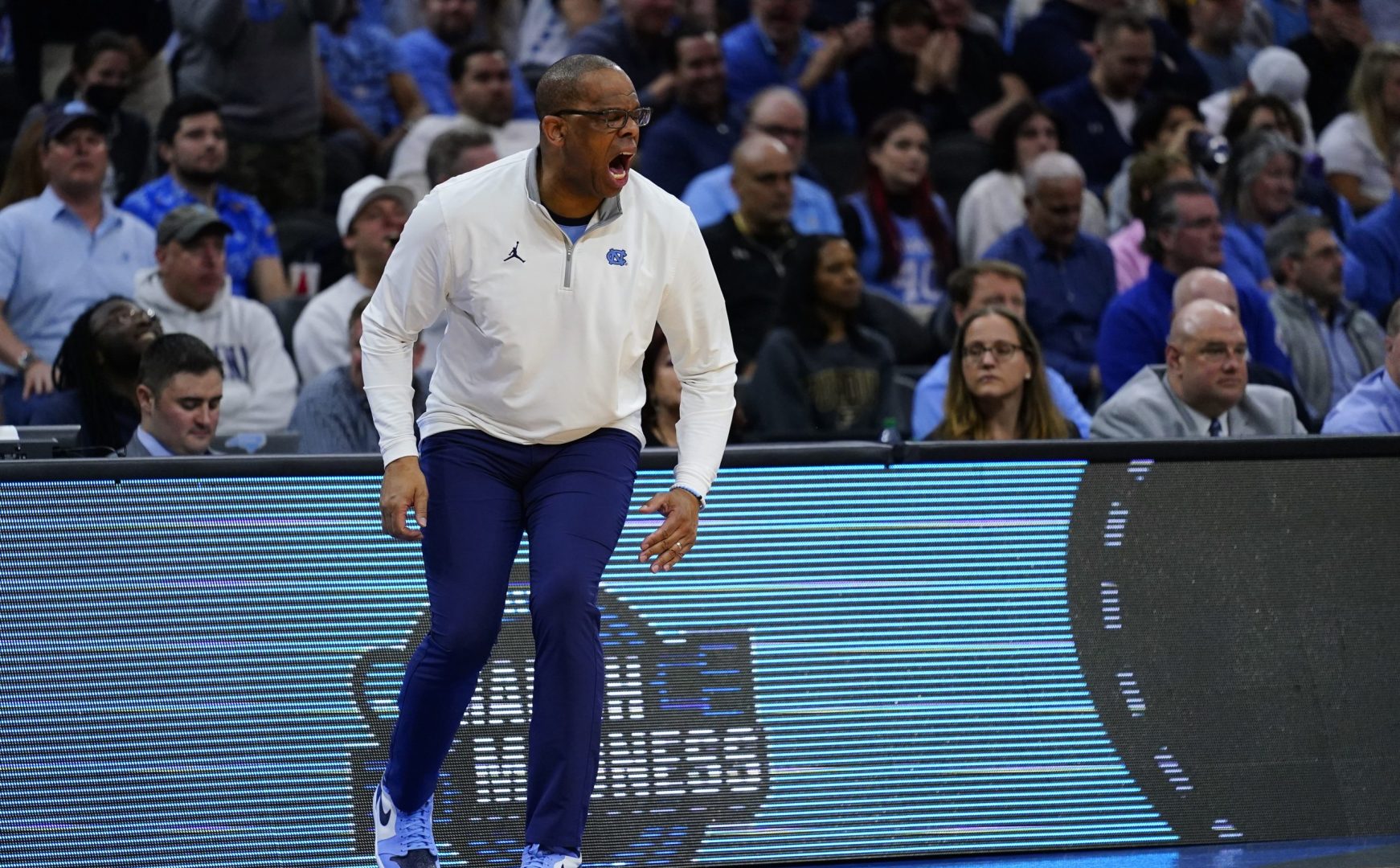 North Carolina head coach Hubert Davis reacts during the first half of a college basketball game against UCLA in the Sweet 16 round of the NCAA tournament, Friday, March 25, 2022, in Philadelphia. (AP Photo/Matt Rourke)

(Philadelphia) — Turns out, the best explanation for the shooting spree Caleb Love put on for North Carolina was also the simplest.

It’s gotta be the shoes.

Reinvigorated by a change of sneakers at halftime, Love went crazy for the Tar Heels on Friday night. He made the game-tying and go-ahead 3-pointers 37 seconds apart to lift Carolina to a 73-66 victory over UCLA in a March Madness matchup of power programs.

Love scored 27 of his career-high 30 points in the second half, part of a barrage that included NBA-range 3s and no-look layups. His go-ahead 3 came with 1:03 left. He also hit a pair of free throws with 7.8 seconds remaining that put away the fourth-seeded Bruins for good.

The idea to change shoes came from the team’s director of operations, Eric Hoots, after Love shot 1 for 8 in the first half. He shot 10 for 16 in the second.

“I’m going to give him a raise,” coach Hubert Davis said of his right-hand man.

North Carolina is one win away from its 21st Final Four, which would improve on the record it already holds. Its next game is Sunday against Saint Peter’s in a first-of-its-kind 8-vs.-15 matchup in the Elite Eight. The 15th-seeded Peacocks topped Purdue 67-64 earlier in the evening.

Every bit as tantalizing, the Tar Heels and their archrival Duke, which plays Arkansas on Saturday, are each one win away from a matchup at the Final Four in New Orleans next weekend. The teams have never played each other in the NCAA Tournament.

As great as the Saint Peter’s run has been, and as great as both games in Philly were Friday night, nobody stood out more over the five hours of hoops at the Wells Fargo Center — the same place Carolina punched its ticket for the 2016 Final Four — than Love.

The sophomore was held to five points in last week’s win over Baylor, but managed one point more than that during the decisive 37 seconds. His go-ahead 3 marked the last of 14 lead changes in a game that was also tied eight times.

Last year, that hot player was Jalen Suggs, the Gonzaga guard who banked one in from near half court to end UCLA’s season at the national semifinal. This time, it was Love, who scored one fewer point than what Bernard (16) and Tyger Campbell (15) put up, combined.

This was a nip-and-tuck affair all the way through. Neither team led by more than eight. In their second-round win over Baylor, the Tar Heels built a 25-point advantage, only to squander it, then pull things together and pull out the game in overtime.

That game got dicey once Brady Manek got tossed for throwing an inadvertent elbow. Manek played all but two minutes in this one and finished with 13 points.

Armando Bacot had 14 points and 15 rebounds for North Carolina, the most crucial of which came when he tipped in a miss by R.J. Davis with 15 seconds left to build Carolina’s lead to five points — the biggest it had been to that point.

But this game, especially the second half, belonged to Love, who started heating up as soon as he came out of the locker room with a fresh pair of Jordans. He scored seven of North Carolina’s first 12 points of the half, then, with the game tied at 44, scored 10 in a row for the Tar Heels.

Those included a pair of twisting, practically no-look layups and an NBA-range 3-pointer. He followed that with a heat-check 3, jacked up from the elbow under pressure. It missed, but that didn’t stop him.

Trailing 64-61 with 2 minutes left, the Tar Heels fed to Love, who missed again — this time on a pull-up 3 that would have tied it. Bacot got the rebound and Carolina fed Love once more. That one went in at the 1:40 mark. The Tar Heels didn’t trail again.

In a rarity for the NCAA Tournament, or any basketball game played outside a playground, the teams went exactly 9 full minutes to start without a single whistle stopping play.

UCLA led 18-14 at that point. Then, sadly, reality hit with two TV timeouts over the ensuing 29 seconds of action.

UCLA’s Jaime Jaquez Jr. played all but two minutes despite the ankle he sprained last week against Saint Mary’s. He had 10 points and five rebounds but shot 1 for 11 in the second half.

This was North Carolina’s 129th victory in the tournament, which ties Kentucky for the all-time lead.

How the U.S. is expanding aid to Ukrainian refugees