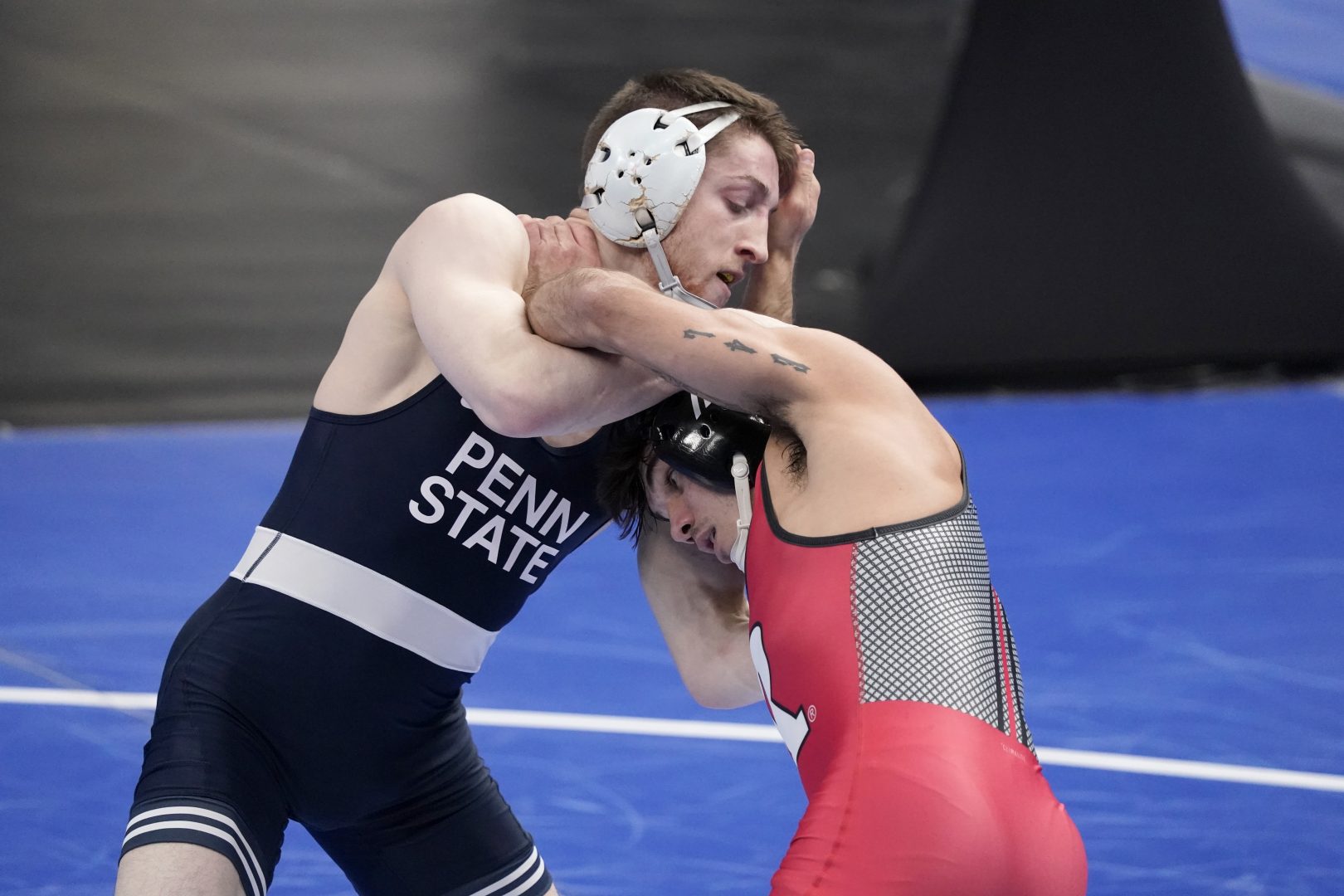 Penn State wrapped up its ninth team title in 11 years hours before the finals, then had five of its wrestlers win individual championships. Michigan was second for its highest team finish in program history, and 2021 champion Iowa was third.

The top-seeded Steveson, who took gold in Tokyo last summer, won 6-2 over Arizona State’s second-seeded Cohlton Schultz. Steveson took control from the outset, scoring a takedown in the opening seconds.

After the match, he flexed to the crowd three times. Fans at Little Caesars Arena continued to cheer, urging him to do his trademark victory backflip. He executed it to perfection and flexed again.

Then he went to the center of the mat, sat down and took off his shoes and left them there, the time-honored practice of wrestlers signaling their retirement. Steveson won his last 54 matches.

“I’m done,” he said in a post-match ESPN interview. “I did what I came to do. I was going to win the Olympic gold and win the national tournament again.”

Steveson’s retirement from amateur wrestling was expected. He has said he’s interested in becoming a professional wrestler and that he will attend WrestleMania in April, though he would not say if he’ll be involved in any way.

“I hope I gain many WWE fans when I take the next step,” he said.

Diakomihalis was never seriously threatened over his five matches, winning the 149-pound title with an 11-5 decision over Nebraska’s 10th-seeded Ridge Lovett. He scored five takedowns against Lovett after beating him in sudden victory in their previous meeting this season.

“I’m feeling good, my feet are moving, and he didn’t get in a position where he could do anything,” Diakomihalis said. “Good execution by coaches, good execution by me, so I thank them for that.”

Diakomihalis won titles at 141 pounds in 2018 and ‘19 but was out of college wrestling the past two years. He took an Olympic redshirt in 2020 and couldn’t compete last year after the Ivy League shut down sports because of the pandemic.

Diakomihalis wrestled at the international level in the interim, then extended his college win streak to 75 matches after going 28-0. He is 94-1 as a collegian, including 15-0 in the NCAA Tournament.

The junior from Rochester, New York, said he planned to return next year to try to join Kyle Dake as Cornell’s only four-time champions.

Heavyweight Greg Kerkvliet wrapped up the Nittany Lions’ 10th NCAA team title with a 6-1 decision over Mason Parris of Michigan in the consolation semifinals.

125: Nick Suriano gave Michigan its first national champion since 2012 with a 5-3 decision over No. 3 Pat Glory of Princeton. The top-seeded Suriano, who won at 133 in 2019 when he was at Rutgers, scored a takedown in the first period and a reversal in the second before fending off Glory late to close an unbeaten season.

133: Roman Bravo-Young of Penn State won his second straight title with a 3-2 decision in the rematch against Oklahoma State’s Daton Fix. Bravo-Young’s early takedown gave him the lead in the meeting of the top two seeds, and his escape in the third broke a tie. Bravo-Young has won 36 straight matches. Fix had won 25 in a row since his loss to Bravo-Young last year.

141: Penn State’s top-seeded Nick Lee repeated as champion with a 10-2 decision over 15th-seeded Kizhan Clarke of North Carolina. Clarke, trying to become the lowest seed to win a title, scored a quick takedown. Lee, who became Penn State’s first five-time All-American, was in full control after that.

157: No. 2 seed Ryan Deakin won 9-2 over Princeton’s Quincy Monday to become Northwestern’s first champion since 2014. The fifth-seeded Monday, son of 1988 Olympic gold medalist Kenny Monday, scored first. Deakin tied it with two escapes and then got six points on a takedown and four-point near-fall.

165: Missouri’s second-seeded freshman Keegan O’Toole won 6-5 over defending champion Shane Griffith of Stanford. The match was tied 4-4 in the third when O’Toole scored a takedown at the edge of the circle. O’Toole extended his win streak to 28 matches.

174: Carter Starocci repeated as champion with a 6-5 overtime win against Mekhi Lewis of Virginia Tech. Starocci’s decisive point in the meeting of the top two seeds came from his 15-second advantage in riding time. Starocci also needed overtime to win the 2021 final.

184: No. 2 seed Aaron Brooks of Penn State successfully defended his title with a 5-3 decision over Michigan’s top-seeded Myles Amine. Brooks got an early takedown and held off Amine the rest of the way. Brooks avenged his Big Ten Tournament loss to Amine.

197: Penn State’s top-seeded Max Dean, who transferred from Cornell, won his first national title with a 3-2 decision over Iowa’s sixth-seeded Jacob Warner. The match was tied until Dean scored a takedown in the final minute. Dean’s brother, Gabe, was a two-time national champ at Cornell.