The "independent state legislature doctrine" asserts that state courts do not have jurisdiction over election policy. 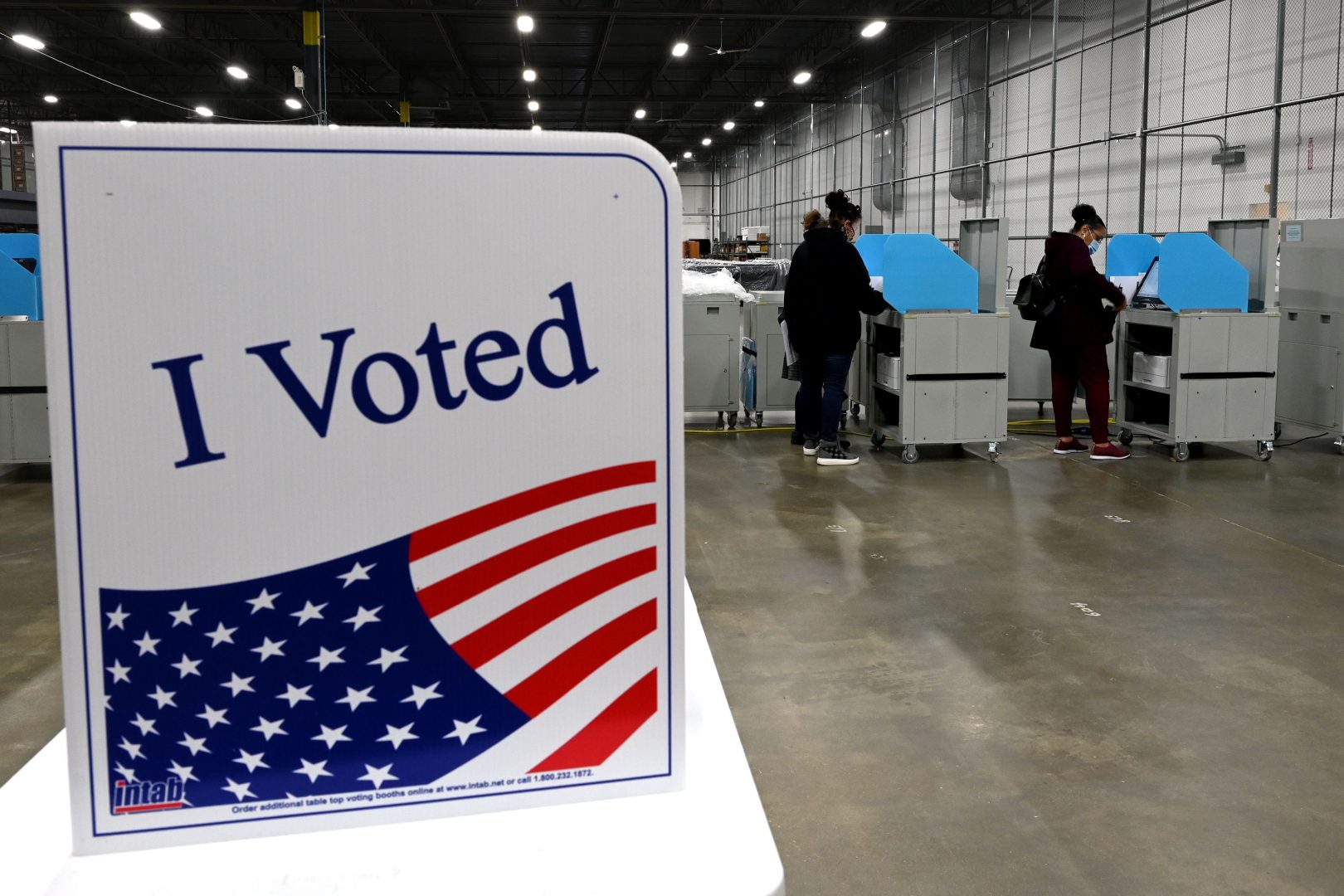 The "independent state legislature doctrine" asserts that state courts do not have jurisdiction over election policy.

Spotlight PA is an independent, nonpartisan newsroom powered by The Philadelphia Inquirer in partnership with PennLive/The Patriot-News, TribLIVE/Pittsburgh Tribune-Review, and WITF Public Media. This story is a collaboration with Stateline, an initiative of The Pew Charitable Trusts that provides daily reporting and analysis on trends in state policy.

(Harrisburg) — The U.S. Supreme Court this month left open the possibility that it could endorse a fringe conservative legal theory that would give state legislatures unchecked powers over election rules before the 2024 presidential election.

Republican officials cited the theory, which asserts that state courts do not have jurisdiction over election policy, in two key cases filed in North Carolina and Pennsylvania over congressional maps selected by their highest courts.

Groups in those states — which included voters, Republican state senators and representatives, an election official, and a congressional candidate — petitioned the U.S. Supreme Court to throw out the respective maps. They argued in federal court filings that the U.S. Constitution gives state legislatures the sole power to set rules for federal elections.

The high court rejected emergency requests to block the maps, allowing the ones chosen by state courts to stay in place for the 2022 midterm elections.

But in a dissent to the North Carolina decision, three conservative justices endorsed the theory known as the “independent state legislature doctrine,” while another signaled he wanted to formally consider the question. That means there appears to be enough votes to put the issue — and the possible legitimization of the doctrine — on the court’s 2023 calendar.

Legal experts and voting rights advocates warn the independent state legislature doctrine could radically alter election administration across the country, and siphon power away from courts and toward the legislatures that write election law. That would leave partisan politicians, rather than independent administrators, overseeing elections — possibly even overturning results they don’t like.

Constitutional scholars have widely panned the theory, arguing that it advances an inaccurate interpretation of the U.S. Constitution and pointing out that it has never been embraced in past rulings. State courts, they contend, have long been able to act as a check on the state legislatures, ensuring lawmakers follow the spirit of the state’s constitution.

“The legislature is created by the state constitution, so it must be limited by it,” said Carolyn Shapiro, a professor at the Chicago-Kent College of Law. “The notion that [lawmakers] are freestanding entities to do anything they want in this context is inconsistent with constitutional democracy.”

If U.S. Supreme Court justices were to legitimize the theory in a ruling, the move would transform the way elections are governed, virtually giving state legislatures a blank slate to set voting rules and to draw congressional maps, said Joshua Douglas, professor at the J. David Rosenberg College of Law at the University of Kentucky.

“It’s concerning for our concept of representation,” he said. “It means that those who are most self-interested in retaining their positions also have the most power now in dictating the rules of the game.” 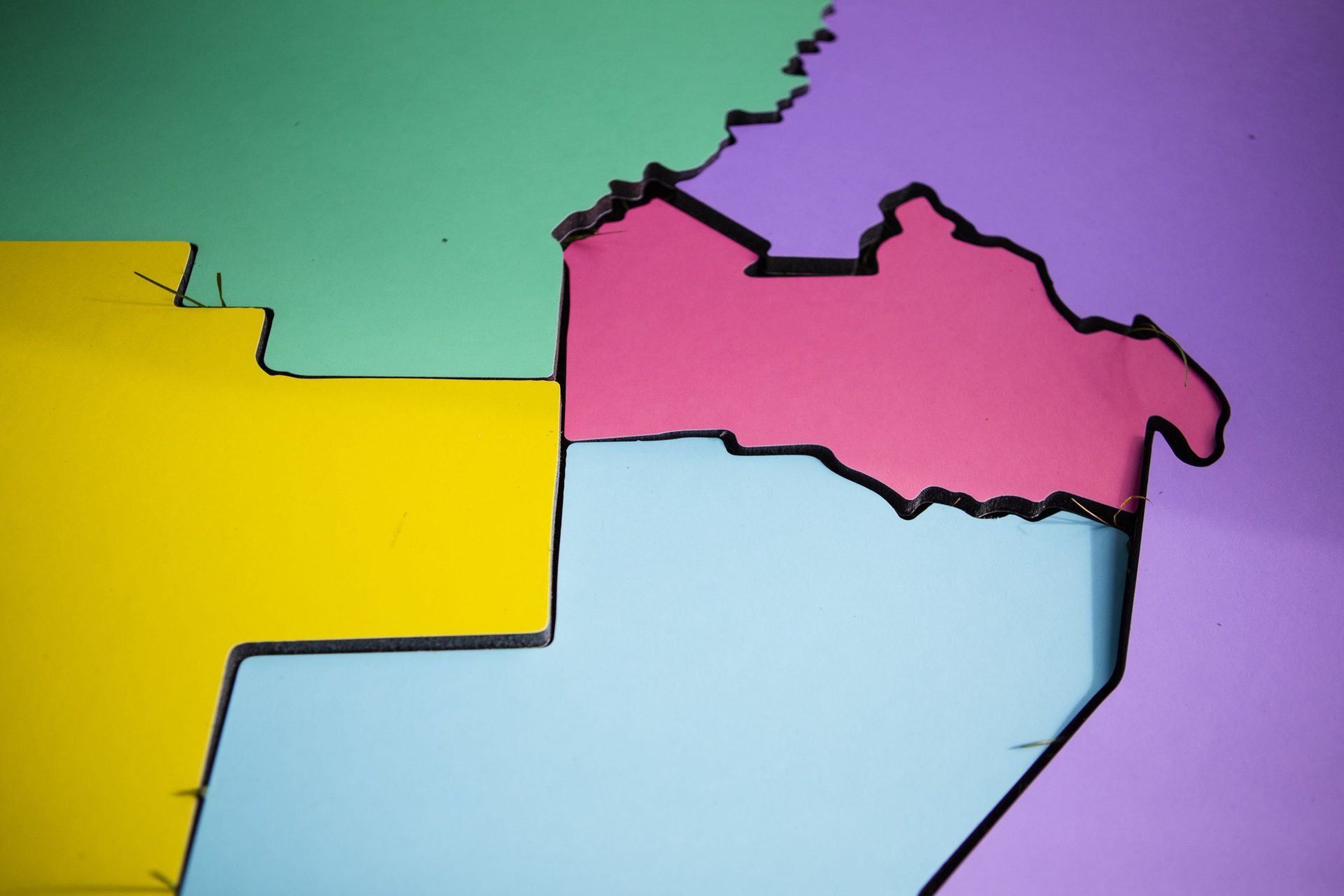 The Pennsylvania lawsuit pits a group of Republicans, including a county commissioner who helps oversee local elections, against Democratic Gov. Tom Wolf and his administration. The GOP group is represented by Jonathan F. Mitchell, the lawyer behind a six-week abortion ban in Texas that is enforced by private citizens. The U.S. Supreme Court has so far allowed that law to stay in place.

The justices declined to hear the Pennsylvania Republicans’ emergency map petition on technical grounds. The case was assigned to a three-judge federal court panel.

At issue is a citizen-submitted congressional map picked by the Pennsylvania Supreme Court in February following months of debate and an impasse between the Republican-led legislature and Wolf, who vetoed a GOP-passed proposal because of its partisan bias.

Citing the independent state legislature doctrine and population differences among districts, the Pennsylvania plaintiffs filed an emergency application asking the U.S. Supreme Court to reject the map and instead implement at-large elections — which would let all of a state’s voters cast ballots for each seat — for the 2022 midterm elections.

Attorneys for the Wolf administration argue that at-large congressional elections are illegal under federal law and that courts are obligated to redraw maps when the state legislatures fail to do so. The lawyers cite a 2003 U.S. Supreme Court ruling in a similar case in Mississippi, in which the legislature failed to pass a new map and a federal district court adopted one.

In 1967, Congress passed a law that banned at-large congressional elections following a series of election changes that included the Voting Rights Act of 1965.

“The problem with [at-large congressional elections] is that it violates federal law,” said Bertrall Ross, a professor at the University of Virginia School of Law who studies constitutional law. “I don’t see how that remedy can be adopted.”

For that reason, he said, it’s unclear what would happen if the U.S. Supreme Court removed state courts from the redistricting process and a governor and legislature reached an impasse on a map.

At the request of the Wolf administration and the citizen group that proposed the map selected by the Pennsylvania Supreme Court, the federal district court recently dismissed much of the suit — including the claims citing the doctrine. The Republican plaintiffs lacked standing, the court found.

In North Carolina, the state’s high court earlier this year ruled the congressional map picked by the GOP-led legislature was gerrymandered. A superior court in Raleigh adopted a new map, and the state Supreme Court refused to block it.

The North Carolina Republican lawsuit argues that the state court’s actions were unconstitutional and, under the doctrine, only Congress has oversight over state election rules.

The group filed an emergency application asking the U.S. Supreme Court to stay the map. The court rejected that request, but four justices appeared open to considering a formal appeal next year — enough to potentially secure the case’s place on the calendar.

Shapiro, of Chicago-Kent College of Law, and Ross argue the two lawsuits are part of a larger attempt by legislatures to strip power from other branches of government.

Pennsylvania Republican lawmakers have for years fought to circumvent Wolf’s veto authority, most recently embracing a strategy of amending the state constitution. In 2021, GOP legislators put on the ballot two constitutional amendments that voters approved to limit a governor’s control over emergency declarations.

These two lawsuits aren’t the only attempts in recent years to advance the independent state legislature doctrine. In 2020, for example, Pennsylvania Republicans cited it in an unsuccessful challenge to a mail ballot deadline extension granted by the state Supreme Court.

A U.S. Supreme Court ruling that endorses the doctrine could pave the way for state lawmakers nationwide to enact policies that might disenfranchise an increasingly multiracial voting public.

“These aren’t just messaging bills, to take a public position and rile up the base,” said Goldstein. “These really are strategic pieces of legislation that are gathering steam, support and also, importantly, normalizing this rhetoric.”

In Wisconsin, former state Supreme Court Justice Michael Gableman, a Republican leading a partisan investigation of the 2020 presidential election, told state legislators that they should take a “hard look” at decertifying President Joe Biden’s victory. His eventual report could give the legislature the impetus to follow through on his suggestion.

In Arizona, Republican lawmakers are considering legislation that would allow the legislature to overturn presidential election results. While Republican House Speaker Rusty Bowers effectively killed the legislation last month, voting rights advocates worry bills like that could be enacted in the future.

Norms around the nonpartisan administration of elections also may be at risk with this doctrine, voting rights activists fear. While state legislatures can make rules around election procedures, state courts have traditionally ensured those laws follow state constitutions.

A U.S. Supreme Court that embraces this doctrine might open the door to state legislatures changing Electoral College votes during a presidential election without judicial review, Goldstein said. State boards of election or independent redistricting commissions, she said, might be disbanded since they, instead of legislatures, perform election duties.

Efforts such as the North Carolina and Pennsylvania suits are all part of a multifaceted effort to limit voting rights, said Douglas, at the University of Kentucky. 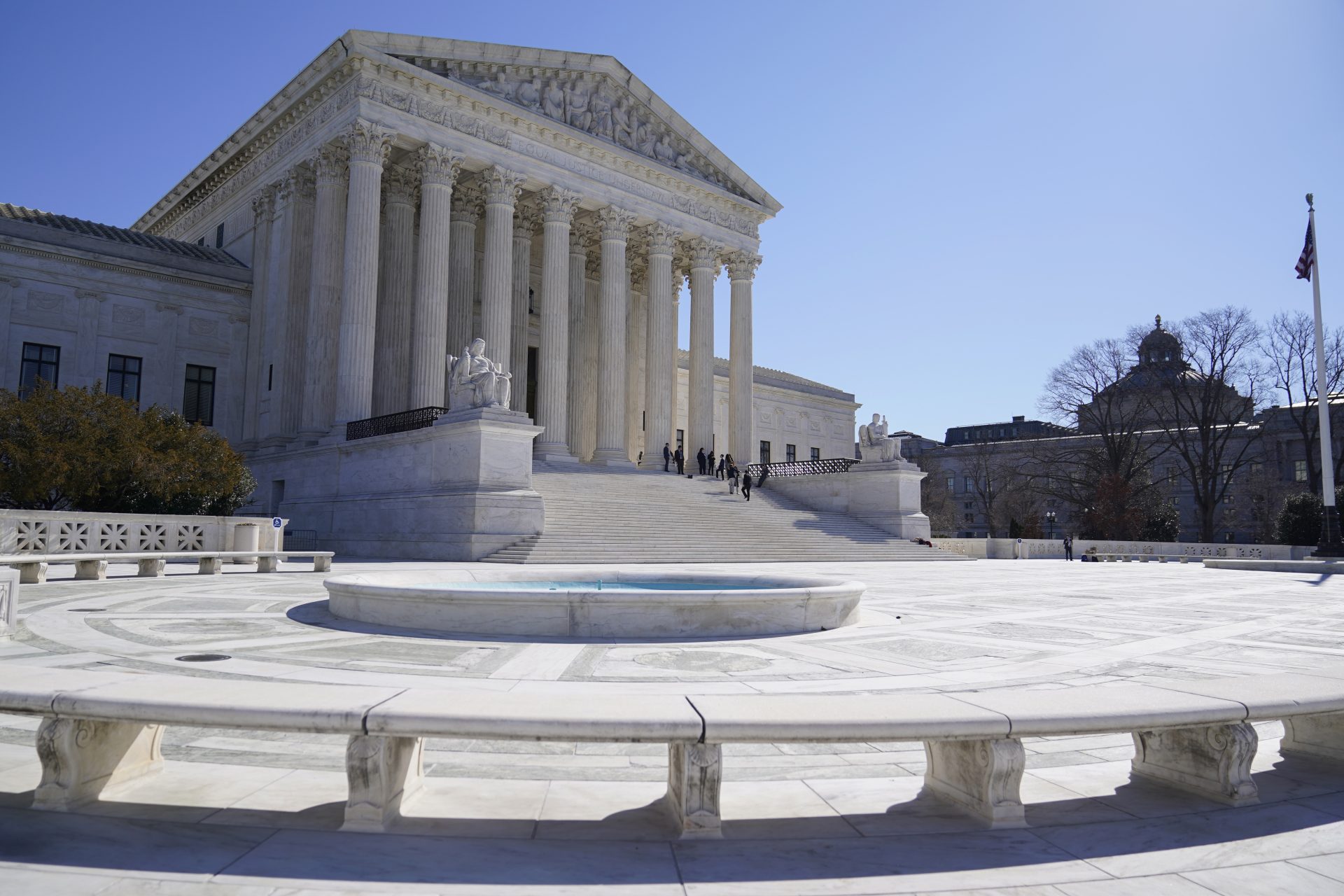 Sympathies on the high court

At least four U.S. Supreme Court justices have shown they are open to the independent state legislature doctrine.

In their dissenting opinion in the North Carolina case earlier this month, conservative Justices Samuel Alito, Clarence Thomas, and Neil Gorsuch said they would have blocked the state’s court-selected map because the state Supreme Court may have violated the U.S. Constitution.

“There must be some limit on the authority of state courts to countermand actions taken by state legislatures when they are prescribing rules for the conduct of federal elections,” Alito wrote in the North Carolina dissent. He later added this is “an exceptionally important and recurring question of constitutional law.”

Justice Brett Kavanaugh, another conservative on the bench, in a concurring opinion wrote that the arguments surrounding the independent state legislature doctrine are questions worth exploring.

These four justices have referred to this doctrine in previous rulings on the U.S. Supreme Court. In 2000, Thomas joined a concurring opinion in Bush v. Gore that also referenced the doctrine.

During the 2020 presidential election, Gorsuch argued, in a case about Wisconsin’s election rules, against allowing state courts to change election rules because of the coronavirus pandemic. Judges, he wrote, don’t have the power to “improvise with their own election rules.”

Unclear still, however, is how conservative Justice Amy Coney Barrett would come down on this issue. While Chief Justice John Roberts is a conservative, he has been less open to this doctrine, traditionally acting as a steady hand for the court.

Legal scholars are torn about the future of this doctrine. Vikram Amar, dean of the University of Illinois College of Law, said he is not sure whether there are five votes on the U.S. Supreme Court to codify it. And while he would prefer to see the doctrine “recede quietly back into the woodwork where it belongs,” he said there is a possibility the high court embraces it one day.

“This is not just wrongheaded,” said Amar, who has criticized the theory in his writings. “It really is perverse in that it’s a theory that’s being invoked in the name of states’ rights and federalism and protecting state legislatures, when in fact the true genius of our federal system is that we give power to each state to do what it wants within its state constitution.”