Mail-in ballots are sorted and counted by workers on Election Day 2020 at Northampton County Courthouse.

A group of Republican lawmakers — some of whom voted for the law — now say no-excuse mail voting requires a change to the Pennsylvania Constitution. 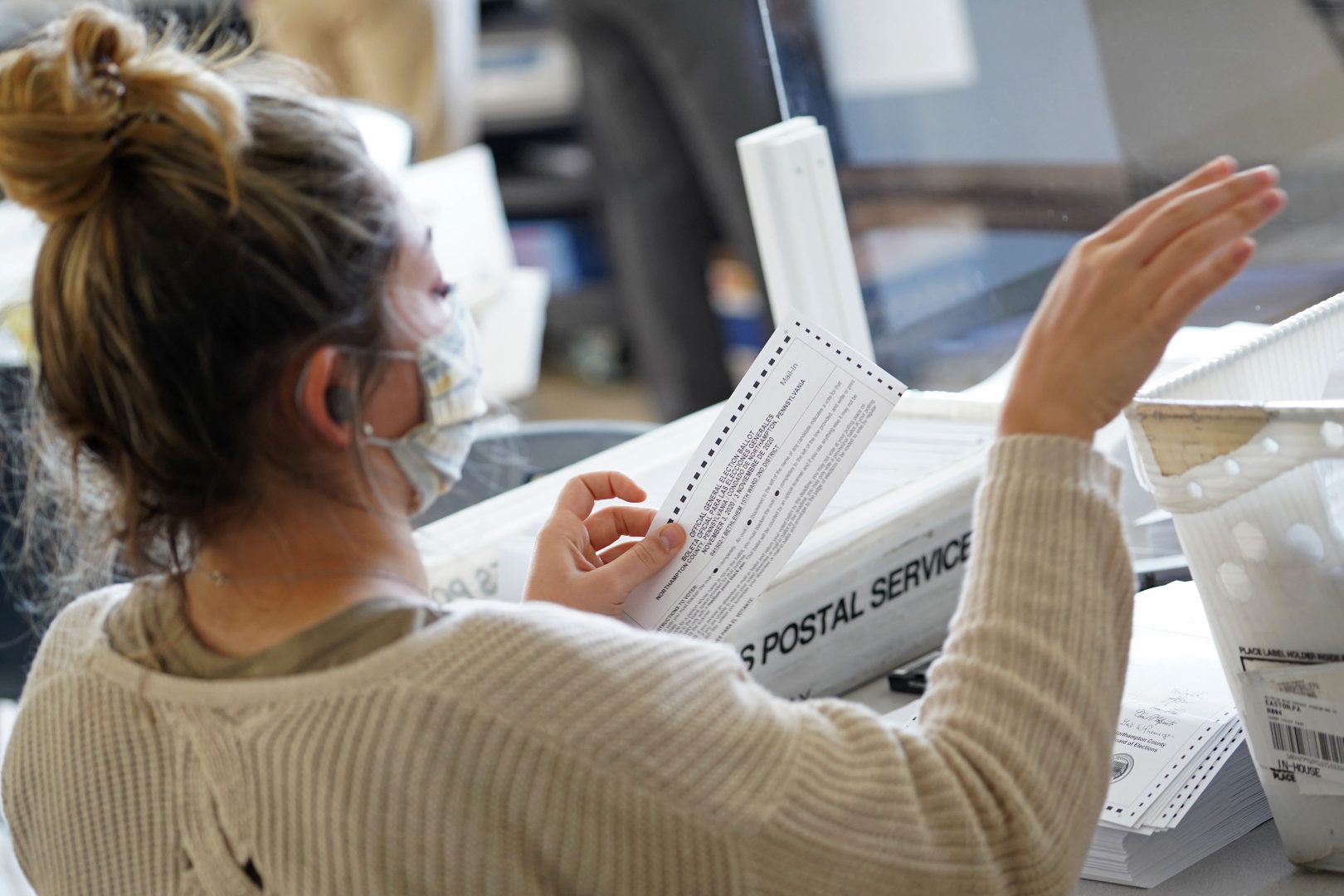 Mail-in ballots are sorted and counted by workers on Election Day 2020 at Northampton County Courthouse.

(Harrisburg) — The fate of Pennsylvania’s popular vote-by-mail law now lies in the hands of the state’s highest court, which on Tuesday heard competing arguments on whether it violates the state constitution and should be struck down.

The law, known as Act 77 and approved overwhelmingly by the GOP-controlled legislature in 2019, ushered in the most sweeping expansion of voting access in Pennsylvania in decades, including the ability to vote by mail without having to provide an excuse.

On Tuesday, justices on the seven-member Supreme Court pressed lawyers representing the Wolf administration and Republican challengers for nearly three hours about the law, focusing on the two sections of the state constitution at the heart of the dispute over its legality: one that dictates eligibility requirements for voting, and another that spells out the circumstances for voters to cast an absentee ballot.

Several justices on the Democrat-majority court also hinted at what voting rights advocates have argued for months: that the GOP-led lawsuit is little more than an effort to undermine  voter confidence and suppress votes, spurred by baseless claims by former President Donald Trump and his supporters that the 2020 election was replete with fraud and stolen from him.

“Let’s be candid,” Justice Kevin M. Dougherty, a Democrat, said while questioning the attorney for the GOP lawmakers who brought the suit. “What it really looks like is that maybe some legislators are concerned because the no-excuse balloting — at least recently — shows that maybe one party votes overwhelmingly by mail-in ballot as opposed to another. So maybe this is an attack for supremacy at the ballot. I don’t know.”

Several justices, Dougherty among them, also took aim at specific language in the constitution that harks back to a time in history when the focus was on protecting the vote for white men only. That language, the justices said, is now being cited by Republican lawyers to defend their position that the phrasing requires people to vote in person, except in very narrow circumstances.

Lawyers for Republicans — several of whom voted for Act 77 — have argued that Pennsylvania’s Constitution requires voters to appear at polling places on Election Day, unless they qualify for an absentee ballot. No-excuse mail voting is not specified in the constitution, they said.

Adding that language would require a constitutional amendment, which calls for the legislature to pass a proposal in two consecutive sessions, and then hold a voter referendum on it.

Gregory H. Teufel, an attorney for the GOP lawmakers, said that when the legislature approved Act 77 in the fall of 2019, it disenfranchised “9 million registered Pennsylvania voters” who were “denied the right to vote on whether to amend the Pennsylvania Constitution to allow no-excuse mail-in voting.”

He added: “It is not up to the legislature to contradict the will of the people.”

Attorneys for the state have countered that to win, lawyers for Republicans must prove that the Pennsylvania Constitution “clearly, palpably, and plainly” prohibits the legislature from authorizing mail-in voting. They argue that there is nothing in the text or structure of the current constitution that prohibits lawmakers from doing so.

The constitution states that elections shall occur by ballot “or by such other method as may be prescribed by law” — a clause, the lawyers say, that gives the legislature the authority to make election changes without having to go through the lengthy process of amending the constitution.

Several justices Tuesday pushed back on that argument, asking lawyers for the state about two prior court cases that determined that the only constitutional exception to voting in person is voting by absentee ballot. Those cases, they noted, pose a problem to the state’s position.

The mail-in voting law remains in place as the justices weigh the question of its constitutionality.

It is unclear how quickly the court will rule. At one point during Tuesday’s oral arguments, a lawyer for the state was asked whether keeping Act 77 in place through the May primary would allow the state enough time to sort out the aftermath of whatever decision the justices make.