FILE - This June 30, 2021, file photo shows Bill Cosby gesturing outside his home in Elkins Park, Pa., after being released from prison. The Supreme Court said Monday, March, 7, 2022, it will not take up the sexual assault case against Cosby, leaving in place a decision by Pennsylvania's highest court to throw out his conviction and set him free from prison. The high court declined prosecutors' request to hear the case and reinstate Cosby's conviction. The Pennsylvania Supreme Court last year threw out Cosby's conviction, saying the prosecutor who brought the case was bound by his predecessor's agreement not to charge Cosby. (AP Photo/Matt Rourke, File)

Cosby will be free and ends a two-decade legal battle. 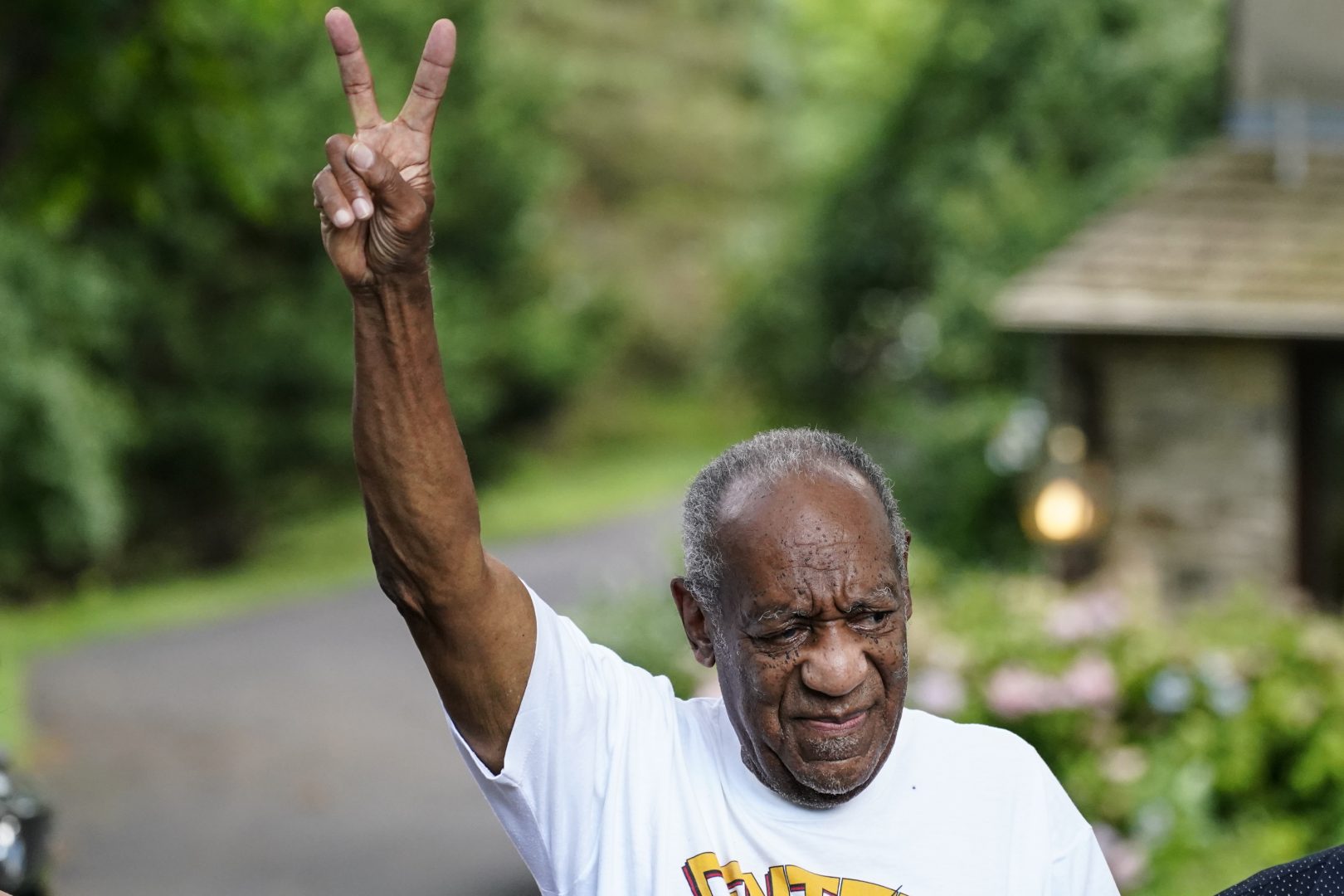 FILE - This June 30, 2021, file photo shows Bill Cosby gesturing outside his home in Elkins Park, Pa., after being released from prison. The Supreme Court said Monday, March, 7, 2022, it will not take up the sexual assault case against Cosby, leaving in place a decision by Pennsylvania's highest court to throw out his conviction and set him free from prison. The high court declined prosecutors' request to hear the case and reinstate Cosby's conviction. The Pennsylvania Supreme Court last year threw out Cosby's conviction, saying the prosecutor who brought the case was bound by his predecessor's agreement not to charge Cosby. (AP Photo/Matt Rourke, File)

(Philadelphia) — The U.S. Supreme Court quietly announced Monday that it would not review Bill Cosby’s sexual assault case, leaving him a free man and ending a two-decade legal drama that shifted the cultural landscape, destroyed the groundbreaking Black actor’s reputation, and sent him to prison for several years late in life.

The high court, without comment, declined to review a stunning decision out of Pennsylvania that released Cosby from prison in June over the word of a former prosecutor who said he had made a secret promise to Cosby’s lawyers that he would never be charged.

A Cosby spokesperson expressed “sincere gratitude to the justices” on behalf of Cosby and his family for the announcement and said he was the victim of “a reprehensible bait and switch” by the district attorney and judge in the case.

“This is truly a victory for Mr. Cosby, but it shows that cheating will never get you far in life,” spokesperson Andrew Wyatt said in a statement, once again taking aim at the court officials in suburban Philadelphia, as he had throughout both criminal trials.

The 84-year-old Cosby, according to Wyatt, remains in good health despite being legally blind. “Many people are calling for projects for him,” and he is considering a final standup tour, Wyatt said.

District Attorney Kevin Steele in Pennsylvania’s Montgomery County said that asking the high court to revive the case “was the right thing to do,” even if it was a long shot. He thanked Constand for her courage and wished her well.

Constand and her lawyers, in a statement, called the decision an “unfortunate outcome for everyone, especially sexual assault survivors.” They noted that the existence of the agreement or promise was “vigorously disputed in the (court) habeus proceedings, and determined by the trial judge not to exist.”

Cosby never signed an immunity agreement in the case. And Steele’s predecessor, Bruce L. Castor Jr., never put anything in writing or told anyone in his office about it. He never mentioned it in public until new evidence emerged and the case was reopened a decade later.

He said he had made the deal with a Cosby lawyer who was by then deceased.

“A secret agreement that permits a wealthy defendant to buy his way out of a criminal case isn’t right,” Steele argued in court in 2016 as he pressed to send the case to trial.

Montgomery County Judge Steven O’Neill found Castor’s testimony on the point not credible and sent the case to trial. However, the state Supreme Court later ruled that whether or not the supposed deal was ironclad, Cosby thought it was when he gave eye-popping — and potentially incriminating — testimony in a lawsuit later filed by Constand.

“The principle of fundamental fairness that undergirds due process of law in our criminal justice system demands that the promise be enforced,” Justice David N. Wecht wrote last year, ordering Cosby’s immediate release after nearly three years in prison.

During the 2006 deposition, a seemingly free-wheeling Cosby gave long, stream-of-consciousness answers to questions from Constand’s lawyers. He detailed his sexual involvement with a string of young women, a few still in their teens, over the years. And he recalled giving several of them, including Constand, alcohol or pills while he remained sober.

“I don’t hear her say anything. And I don’t feel her say anything. And so I continue and I go into the area that is somewhere between permission and rejection. I am not stopped,” Cosby said in the deposition, describing a sexual encounter that came after he gave her three pills for stress, which she said knocked her out.

He was arrested in the Constand case on Dec. 30, 2015, just days before the 12-year statute of limitations expired. Steele had reopened the case after The Associated Press went to federal court to unseal Cosby’s long-buried testimony in Constand’s lawsuit.

Cosby, after giving four days of damaging testimony, had paid her $3.4 million to settle the case.

He went on trial in the criminal case in June 2017. The jury could not reach a verdict. Less than a year later — after media reports about media mogul Harvey Weinstein’s sexual abuse of women galvanized the #MeToo movement — a second jury convicted Cosby of drugging and molesting Constand.

The AP does not typically identify people who say they are victims of sexual assault unless they grant permission. Constand, now an advocate for sexual assault survivors, has done so.

Scores of women have come forward to say Cosby also sexually assaulted them, but Constand’s is the only one that led to an arrest. His insurer, against Cosby’s wishes, settled a Massachusetts lawsuit involving seven accusers for an undisclosed amount after the 2018 conviction. At least two other lawsuits remain pending against the actor.

Castor, who said he made the deal with Cosby’s lawyer, later represented former President Donald Trump at his second impeachment trial, at which Trump was acquitted of inciting the violent mob that stormed the U.S. Capitol on Jan. 6.

Castor said he declined to arrest Cosby in 2005 based in part on his belief that both parties “could be held in less than a flattering light.” Constand later sued Castor for defamation and won a settlement from him. Castor countersued Constand, but the judge threw it out.