Will the U.S. Supreme Court wade into the battle over the Pennsylvania congressional map?

The case could have massive implications for election laws around the country. 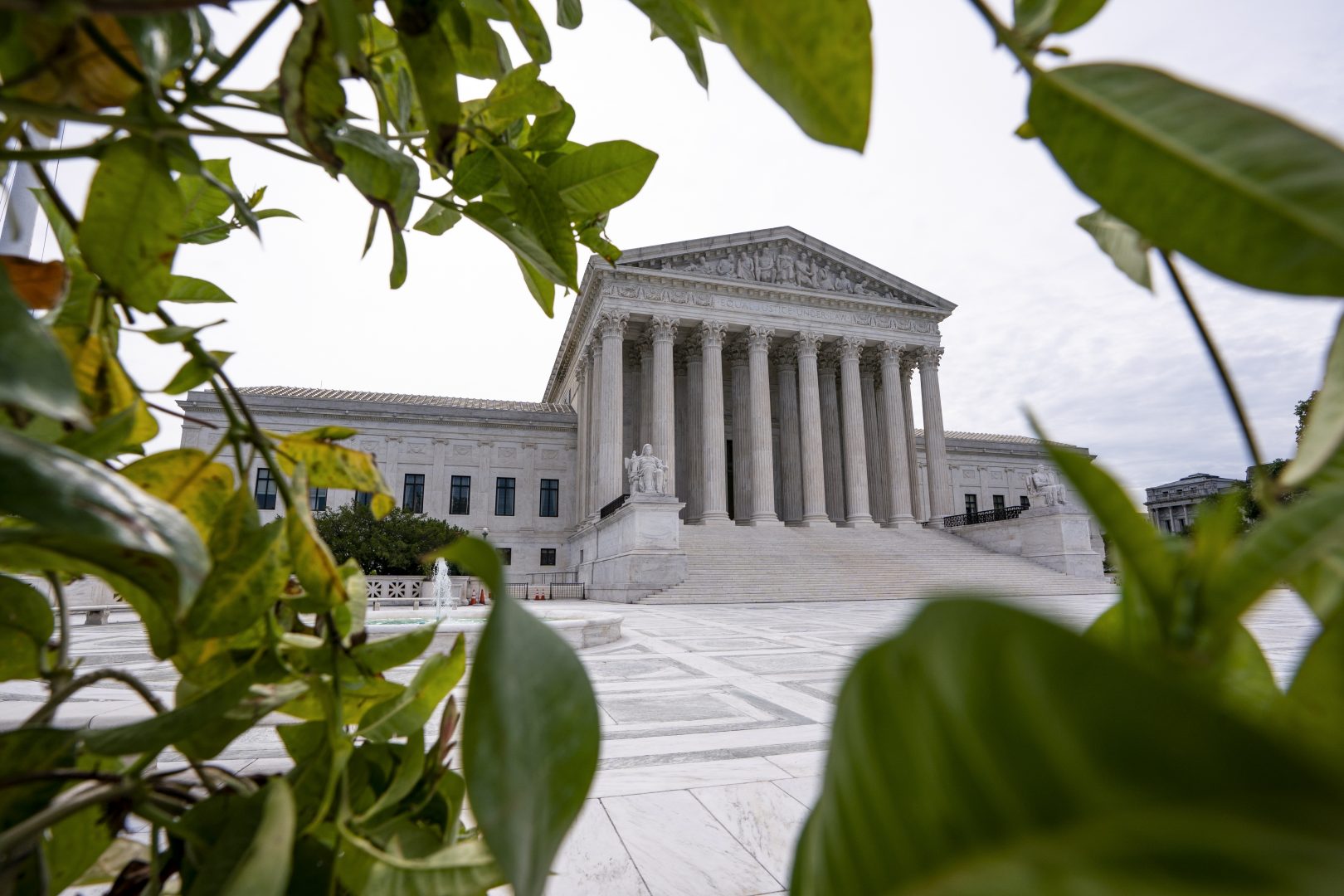 The U.S. Supreme Court is deciding this week whether to wade into a complicated legal battle over Pennsylvania’s new congressional map. It’s not clear how the justices will rule, and the case could have massive implications for election laws around the country.

At issue is a fundamental question: Who has the power to determine how elections are run?

On one side, a group of Republican litigants is trying to make the case that state legislatures have unique power to make election rules, and that the Pennsylvania Supreme Court’s decision to step in and choose a map in the face of legislative gridlock violates the U.S. Constitution.

On the other, a group of Democratic respondents is saying that the Republicans lack standing, and that their request would both violate federal laws and precedents and “cause widespread confusion.”

Experts tend to believe the Supreme Court won’t take up the case. But Vikram Amar, a constitutional law expert who serves as dean of the University of Illinois College of Law, said the current justices have surprised him before.

“If you made me bet, yeah, I would bet that they will not step in,” he said. “But I would not wager any more than I had to.”

The lawsuit is being brought by a few conservative attorneys on behalf of a group of GOP voters and political candidates. Most prominent of the lawyers is Jonathan F. Mitchell, a former Texas solicitor general who is best known as the architect of an elaborate Texas law that circumvented Roe v. Wade and effectively banned abortion in that state.

The crux of their argument has to do with Article 1, Section 4 of the U.S. Constitution, which says that “the Legislature” of each state is charged with prescribing “the Times, Places and Manner of holding Elections for Senators and Representatives.”

Generally, this clause has been interpreted to mean that legislatures decide on election processes, but that those processes are still subject to the usual system of checks and balances by the executive and judicial branches.

These GOP lawyers, however, are making the case that state courts have no power over redistricting. The Pennsylvania Supreme Court’s stepping in and choosing a congressional map for the state, they wrote, is “is flagrantly unconstitutional … [because] the Supreme Court of Pennsylvania has no authority to impose a congressional map unless “the Legislature” has authorized it to do so.”

This isn’t a new argument. The idea that state courts cannot intervene in election matters has come to be known as the “independent state legislature claim.” A similar claim is being made in another case currently before the Supreme Court that argues that the North Carolina high court acted unconstitutionally in throwing out the state legislature’s proposed map as a partisan gerrymander.

The Pennsylvania case is unique in several ways, though. For one thing, the Pa. Supreme Court never threw out a legislative map; it picked its own because Gov. Tom Wolf, a Democrat, vetoed the map drawn by legislative Republicans, and the two sides deadlocked.

This has historically been the norm in map deadlocks. The Pennsylvania court, for instance, intervened in a similar case in 1992. But the GOP litigants say that instead the remedy should have been a little-used provision of the U.S. Constitution that says if a state that is losing a congressional district can’t produce a timely congressional map, all congressional races that cycle must be run at-large — that is, statewide.

Use of that provision is complicated because it contradicts a subsequently added constitutional provision that says representatives must “be elected only from districts.”

In this particular case, the plaintiffs say they actually believe courts can intervene when a map is unconstitutional, but that the Pennsylvania court exceeded its authority by taking up the case from the deadlocked legislature.

They also say the map chosen by the court has too much variation in population size between districts, and that the court further violated the Constitution by updating the election calendar to account for delays.

What are the justices thinking?

Recently, the Supreme Court has had a mixed record on this question of state legislatures’ powers over election law.

One is a 2015 decision, in which justices ruled that Arizona had not violated the U.S. Constitution when it took redistricting out of the legislature’s hands in favor of an independent commission. It was a narrow decision, and in their dissent four conservative justices argued that the Elections Clause had indeed been violated — essentially suggesting they believe the legislature does have some particular power in election matters.

Three of those justices, John Roberts, Clarence Thomas, and Samuel Alito, are still on the court, and are now part of a conservative majority.

Amar noted that might suggest the current crop of justices could be amenable to an “independent state legislature” argument. But, he noted, that conclusion is complicated by a 2019 case that saw the conservative justices all sign on to a majority decision that held that federal courts have no role in intervening in partisan gerrymandering, but that state courts could still have an oversight role.

The only conservative justice on the court today who was not part of that 2019 decision is Amy Coney Barrett.

“I’m not going to make a prediction,” Amar said. “I will say, it would be startling indeed for justices who have signed on to that language in 2019 to basically ignore it now.”

Amar has his own opinions on the question of state legislatures’ power over election matters. He recently co-authored a scathing paper with his brother, Yale Law professor Akhil Amar, in which they call the “independent legislatures” theory “utterly indefensible” and “rubbish.”

Personally, he said, he would see any ruling in favor of the Republican litigants in this case as a “poor,” contradictory decision, and has enough “belief in the system that the justices will do the right thing.”

Others have come to different conclusions.

Rick Hasen, an election law expert at the University of California, Irvine School of Law, recently noted in an article for Slate that Justices Alito, Thomas, Neil Gorsuch, and Brett Kavanaugh were moved by GOP lawmakers’ “independent legislature” arguments in several cases in the lead-up to the 2020 election — including one that saw Alito order Pennsylvania to sequester ballots that arrived during the state Supreme Court’s deadline extension.

Hasen, too, saw lots of reasons why the court might not want to open this can of worms, one of which is simple: Midterm elections are coming up quickly, and major process changes would be confusing.

But, he added, there’s a chance five justices will side with the conservatives, and that would have huge consequences.

It would “profoundly alter the balance of power between state courts and state legislatures,” Hasen wrote. “It could essentially neuter the ability of state courts to protect voters under provisions of state constitutions against infringement of their rights. This would apply not only to redistricting but to laws restricting registration and voting practices.”

A backdrop of gridlock

The battle over Pennsylvania’s new congressional map has been building to this final conflict for many months.

The two sides were at loggerheads throughout the process, and ultimately Republicans passed a map that would have given their own candidates a boost in elections. Wolf vetoed it, arguing it was an attempt at gerrymandering. A Democratic group had already filed a lawsuit predicting an impasse and saying the appellate courts should intervene — and, with a primary deadline looming, they did.

More than a dozen parties to the case — voters, good government groups, and partisans on both sides of the aisle — submitted alternative maps, and the state Supreme Court opted to choose one of them.

The Pennsylvania justices went with a plan that a Stanford University political scientist had drawn at the behest of a group of Democratic voters. Designed to minimally change the current, court-drawn map, it would likely create at least seven safe GOP districts, at least six that would be safe for Democrats, and four competitive enough to be tossups.

It’s not clear when the Supreme Court will make its decision, but it could come as soon as Friday.

redistrictingSupreme Court of the United States