A crane is in place on Monday, Jan. 31, 2022, as part of clean up efforts at the Fern Hollow Bridge in Pittsburgh that collapsed Friday, Jan. 28. (AP Photo/Gene J. Puskar)

"It could be a long-term mistake" 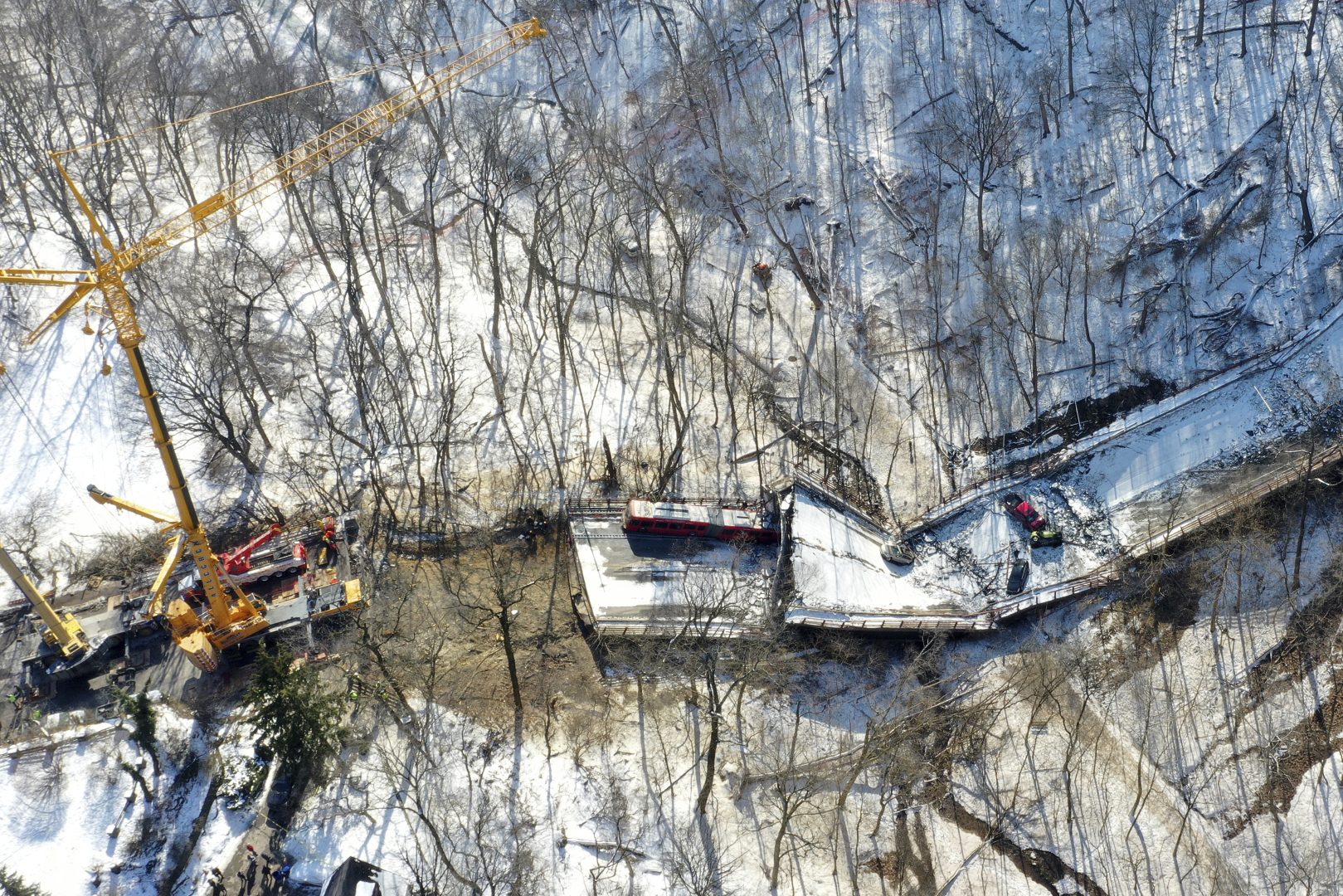 A crane is in place on Monday, Jan. 31, 2022, as part of clean up efforts at the Fern Hollow Bridge in Pittsburgh that collapsed Friday, Jan. 28. (AP Photo/Gene J. Puskar)

Efforts to restore the collapsed Fern Hollow Bridge in Pittsburgh were fast-tracked through an emergency declaration at the end of January. But while everyone agrees the crucial East End artery should be reconnected quickly, some groups want to ensure the replacement — whose early design has been described as resembling a “highway overpass” by those who’ve seen it — is worthy of the “city of bridges.”

Under normal circumstances, the process to design a new bridge would include time for public input and a review by the Pittsburgh Art Commission. That won’t be the case for Fern Hollow.

“Due to the emergency nature of the project, the public involvement process is somewhat compressed,” said Steve Cowan, spokesperson for PennDOT’s District 11.

The emergency disaster declaration allowed the city to work more quickly with PennDOT, which is now responsible for the $25.3 million cost for design and reconstruction. Cowan said the agency is coordinating with numerous city departments, Pittsburgh Parks Conservancy, and the Pittsburgh History and Landmarks Foundation. 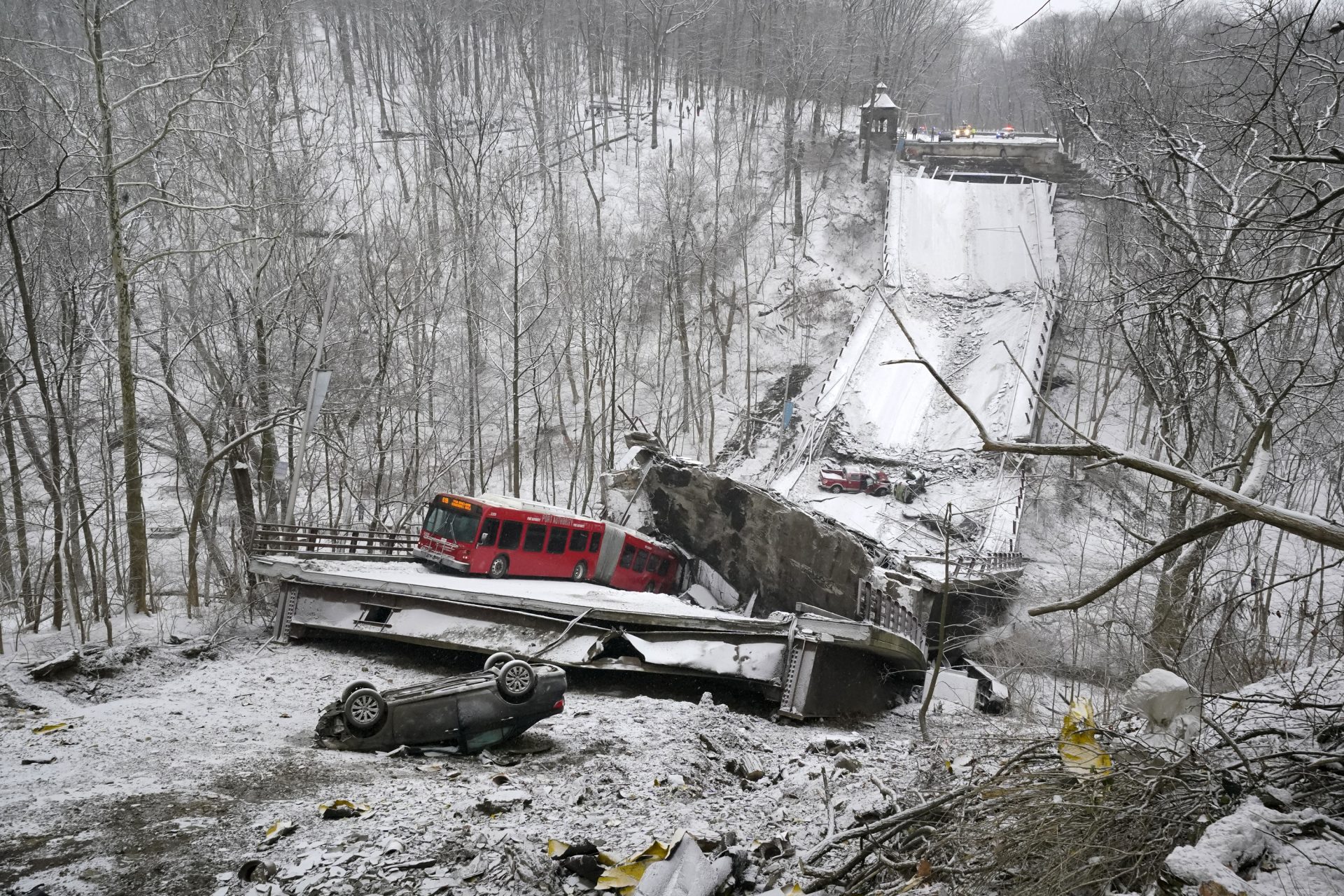 A Port Authority bus that was on a bridge when it collapsed Friday Jan. 28, 2022, is visible in Pittsburgh’s East End. A two-lane bridge collapsed in Pittsburgh early Friday, prompting rescuers to rappel nearly 150 feet (46 meters) while others formed a human chain to help rescue multiple people from a dangling bus.(AP Photo/Gene J. Puskar)

Cowan said PennDOT expects to provide an update on the bridge design next week. But Art Commission members have seen a preliminary design of the bridge and were invited to comment on some minor aspects of it, said Andrew Moss, the commission’s chair.

“Based upon what we have seen so far, this is going to be very similar to any highway overpass,” he said.

In a letter to Mayor Ed Gainey and Gov. Tom Wolf this week, the commission urged a brief pause to the replacement process to “allow for the design of this prominent civic structure to be carefully considered.”

“It’s an important connection, and it really needs to be [rebuilt] with speed,” said Sarika Goulatia, an installation artist and the commission’s secretary. But “the aesthetics of the bridge cannot be ignored.”

Goulatia noted that the commission has held special hearings in the past to help keep important projects moving, and said something similar could be done in Fern Hollow.

Moss said beautiful bridges are an important part of Pittsburgh’s identity, and this bridge is unique: It crosses over historic Frick Park, and connects numerous neighborhoods.

“This bridge is hopefully going to last us 50 to 100 plus years,” he said. “What are a couple months to get it right over the course of a century?”

There’s a precedent for the commission’s objections.

In 1917 the Sixth, Seventh, and Ninth Street bridges were found to violate federal legislation that required bridge construction to allow for free travel of vessels on the nation’s rivers. Then-Secretary of War Newton Baker ordered the “immediate” reconstruction of the bridges, and county engineers flew into action. By 1924, the federal and local governments approved the designs, but the Pittsburgh Art Commission rejected them. According to a video produced by Allegheny County, the commissioners wanted more “aesthetically pleasing” bridges that would provide “better views of the city.”

By early 1925, new designs were approved that created the bridges now known as the city’s iconic “Three Sisters.”

Rushing a bridge replacement today “could be a long-term mistake,” Moss said. 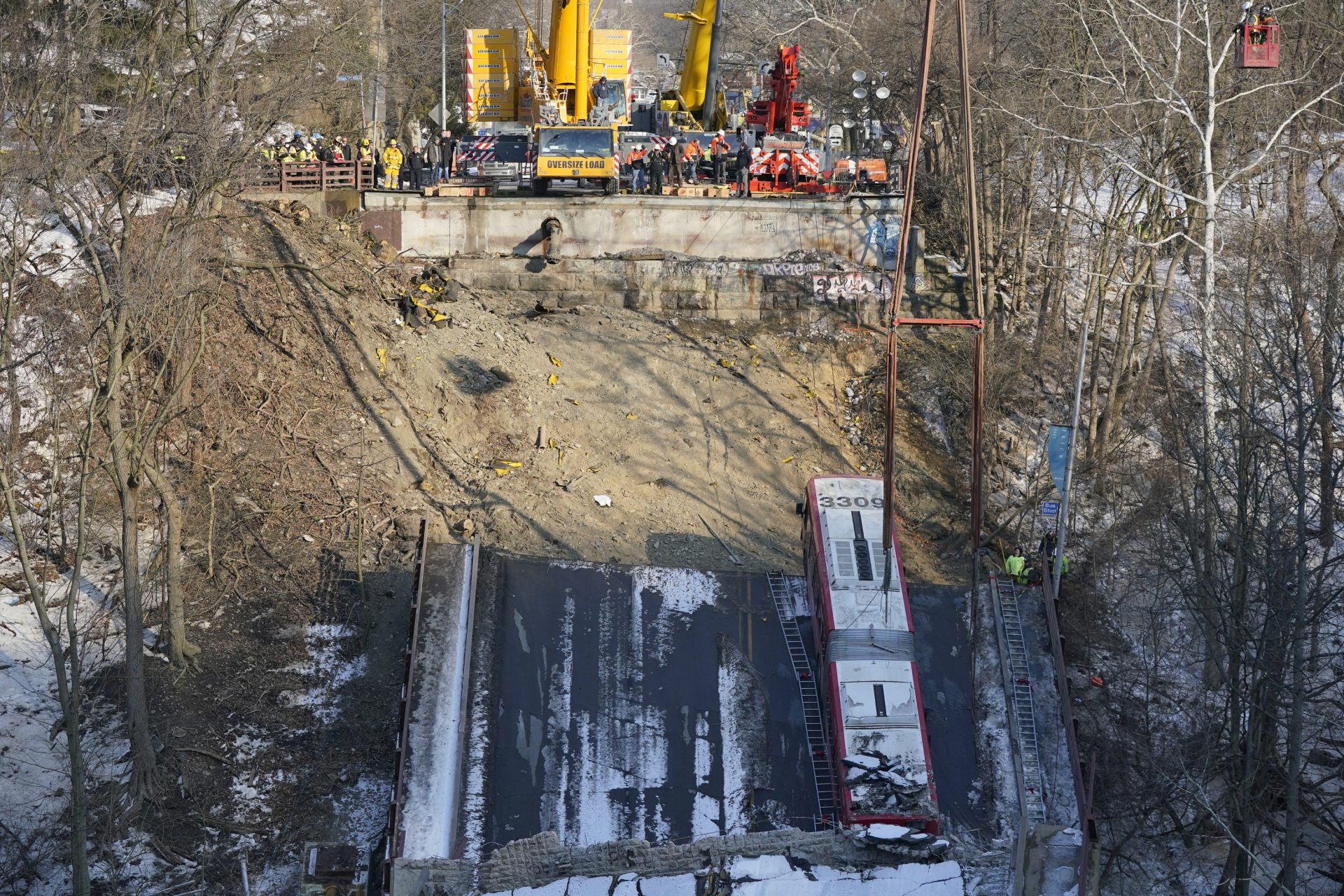 Workers use cranes to position a lifting mechanism in place to remove the bus that was on a bridge when it collapsed Friday as they work to remove it during the recovery process on Monday Jan. 31, 2022 in Pittsburgh’s East End. (AP Photo/Gene J. Puskar)

Another group, Bike Pittsburgh, also wants to invest a little more time in replacing the bridge. Bike Pittsburgh has urged the city and state to use the reconstruction process to address existing travel concerns.

“The bridge doesn’t exist in a vacuum,” said Scott Bricker, executive director. “It exists as part of a network of streets, especially with Forbes Avenue there and this very popular biking, walking route. Let’s make it safer.”

As Forbes Avenue heads east from Squirrel Hill to Wilkinsburg, between Shady and South Braddock Avenues, the two-lane road becomes four lanes. People have been hit on their bikes along that stretch, where traffic regularly exceeds the 35 mph speed limit. And while there is a sidewalk on one side and bike lanes in either direction, they are often strewn with debris.

“We are not trying to prolong the reconstruction of this really important connection,” Bricker said. “But there should still be some type of process by which people’s voices are heard.”

In addition, he noted the city and state could save money by looking at improvements to the road and the bridge simultaneously.

City press secretary Maria Montaño said the Art Commission will have a chance to weigh in as the design process advances. However, when it comes to a redesign of Forbes Avenue, “the brief here is the bridge,” she said. “Our main priority right now … is to safely and efficiently restore access to this thoroughfare.”