“They are just weaponizing the fact that most everyday Americans don’t yet realize that they know someone who is transgender." 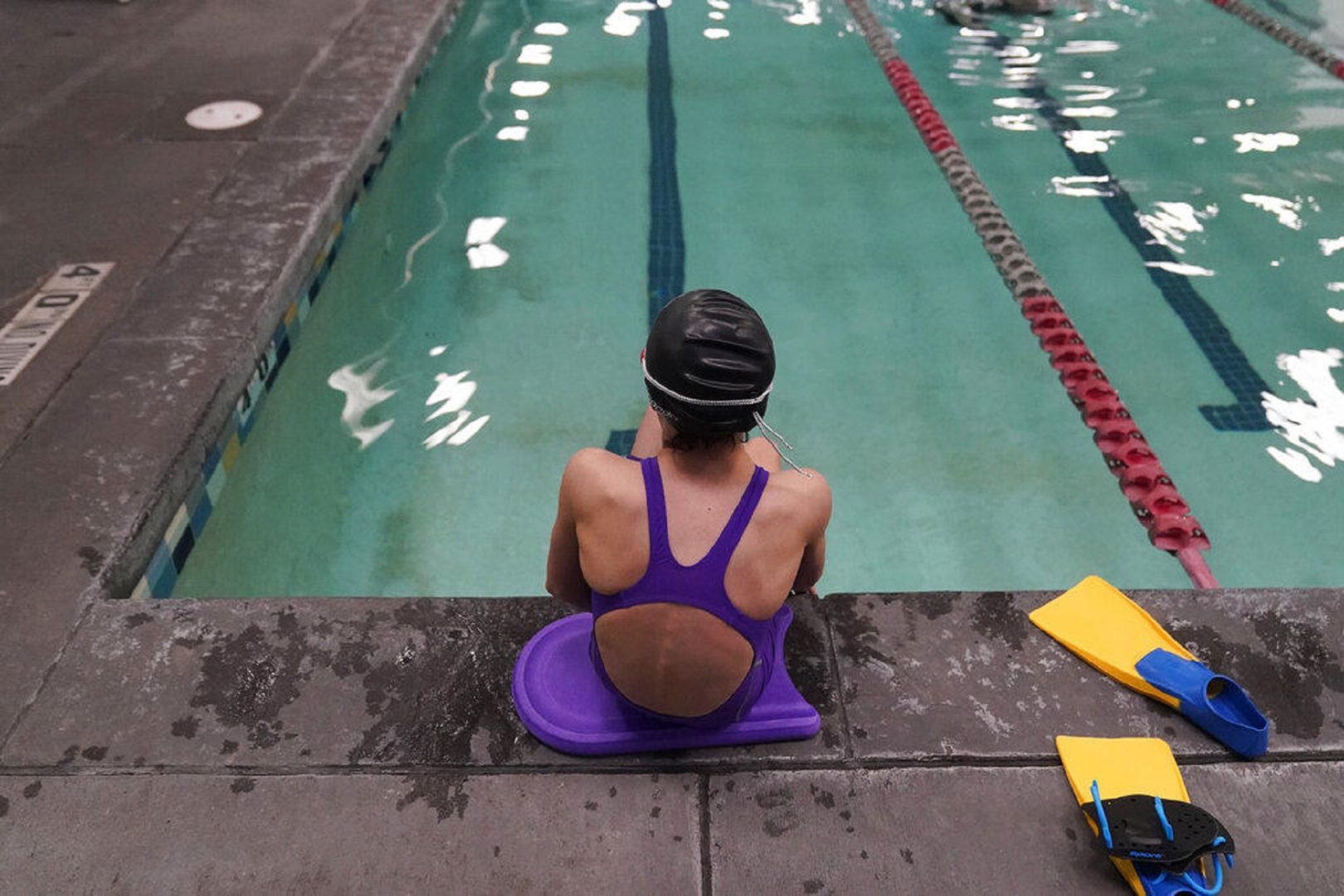 (Scranton) — Dr. Mehmet Oz leans in to ask a little girl, “Do you remember when your parents thought you were a boy?”

The question was but a few seconds of a full 2010 episode of “The Dr. Oz Show” that focused on the experience of raising transgender children. But the clip now appears in an attack ad aired by a super PAC supporting one of his Republican primary opponents in the crowded and high-stakes race for U.S. Senate in Pennsylvania.

Another campaign ad, from Republican U.S. Senate candidate Vicky Hartzler in Missouri, targets transgender people in sports and has her referring to an NCAA athlete — Ivy League championship-winning University of Pennsylvania swimmer Lia Thomas — by her deadname and saying “women’s sports are for women, not men pretending to be women.”

And on Wednesday, Texas Gov. Greg Abbott, a Republican who is running for reelection, ordered the state’s child welfare agency to investigate reports of gender-confirming care for kids as abuse.

Derision and disparagement of transgender people, and even of those perceived as their allies, are proliferating on the airwaves and in statehouses across the country as 2022 election campaigns heat up. It’s a classic strategy of finding a “wedge issue” that motivates a political base, political observers say.

“They are just weaponizing the fact that most everyday Americans don’t yet realize that they know someone who is transgender,” said Rodrigo Heng-Lehtinen, executive director of the National Center for Transgender Equality. “It is easy to fall for a myth about a group of people you don’t know, and that’s just human. … It’s just really unfortunate to now see a group of politicians try to use that to their own advantage.” 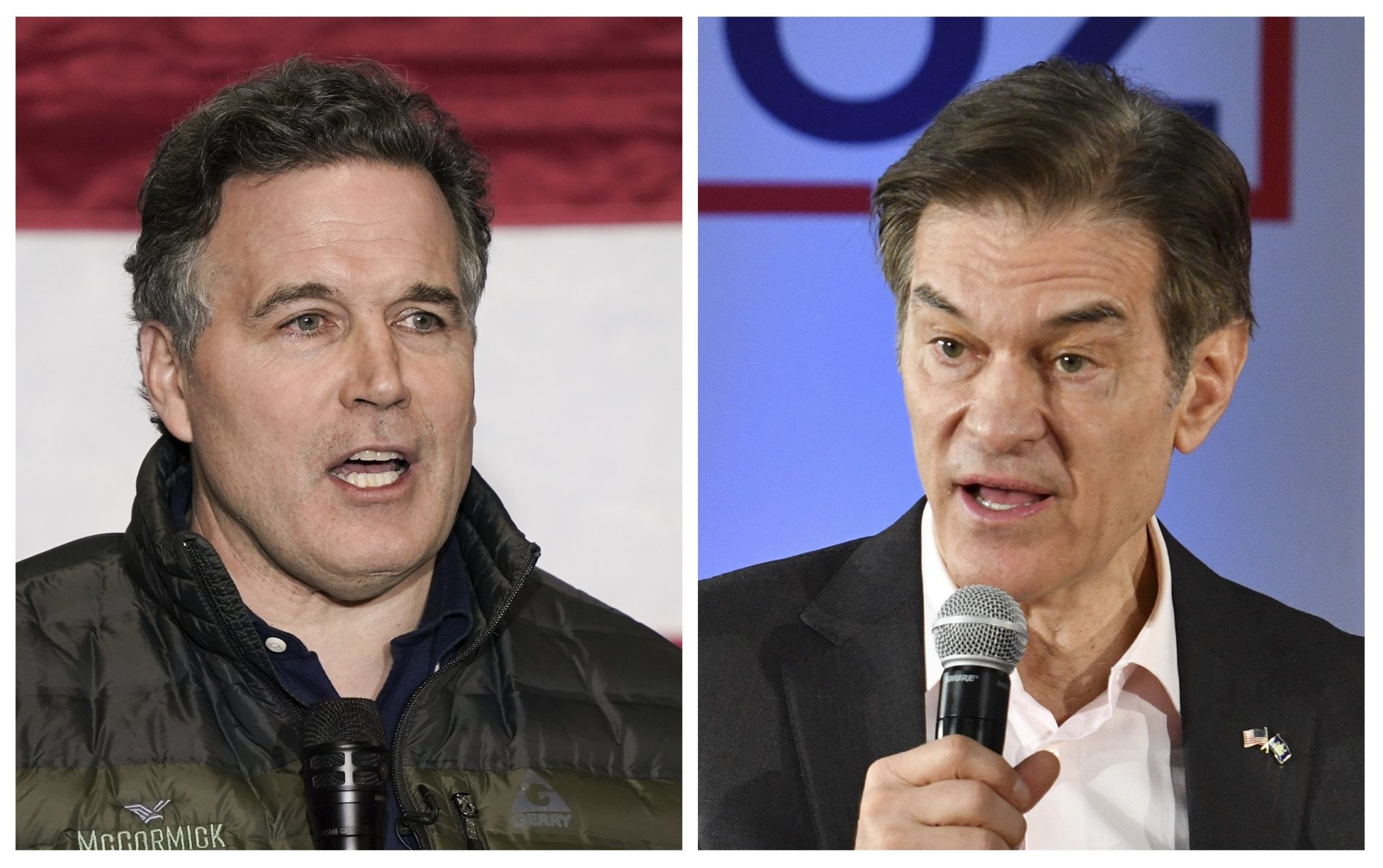 In this 2022 photo combination shown are Republican Pennsylvania U.S. Senate candidates, Dave McCormick, left and Mehmet Oz. A super PAC aligned with a McCormick, aired a TV ad suggesting that Oz is not conservative enough and included a clip from a 2010 “Dr. Oz Show” episode during which Oz interviews a transgender child and a transgender teen.

Republicans use it because public opinion is on their side, said Neil Newhouse, a veteran Republican pollster.

The idea of restricting transgender athletes resonates with parents of high school athletes, motivates the Republican base, and carries swing voters by 2 to 1, Newhouse said.

In a primary, a Republican candidate can use it to establish their conservative credentials and to come out first or forcefully enough to own the issue, Newhouse said. Or it can be used to push a rival to the left, he said.

Asked for comment on the ad, which does not mention sports, Oz’s campaign — using inaccurate terminology to describe transgender women — said only that the celebrity surgeon doesn’t believe that “biological males should compete in women’s sports.”

The efforts to make political hay of transgender and other LGBTQ people extend well beyond just campaign ads.

At least 10 states have banned transgender athletes from participating in sports in a way that is consistent with their gender identity.

Indiana is poised to be the 11th, although federal courts have blocked laws in Idaho and West Virginia. And then there are states that are banning or investigating gender-confirming treatment, such as Texas.

The narrative of transgender people as a threat has strong parallels to bathroom-use and same-sex marriage bans and can be traced to Anita Bryant’s “Save Our Children” campaign in 1977, said Andrew Proctor, an associate professor of politics at Wake Forest University who studies and teaches LGBTQ politics.

The political framing is often around protecting girls, which is probably designed to broaden its appeal, Proctor and others said.

Although examples like Lia Thomas are few across the country, Hartzler — who cites her experience as a high school athlete and coach — said in an interview that the issue of trans athletes is ad-worthy in a Senate race because it is a “representation of the wokeness that is being inflicted upon us from all sides and has gone beyond common sense.”

A spokesperson for University of Pennsylvania athletics said Thomas would not comment on the ad. 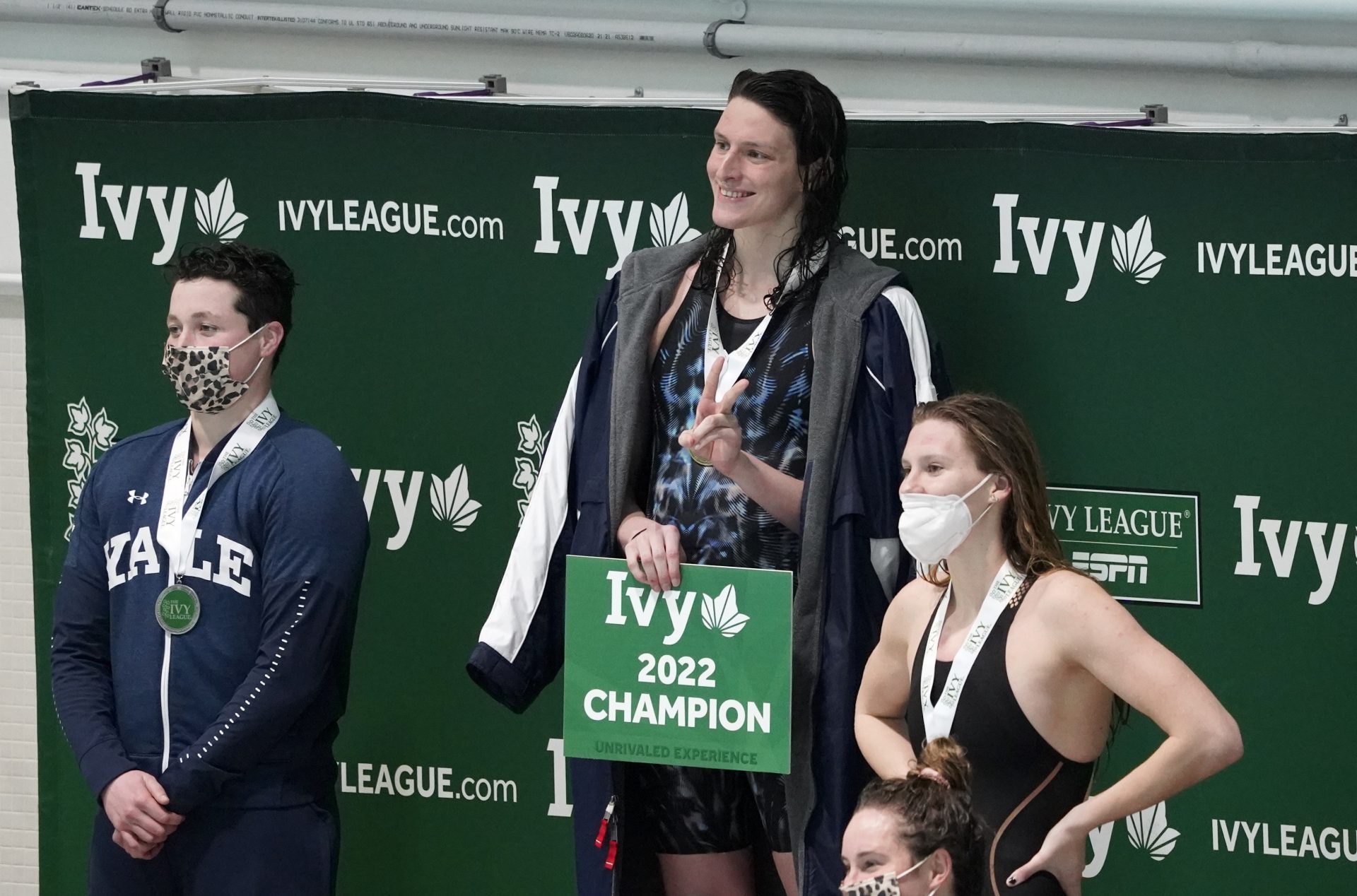 Pennsylvania’s Lia Thomas, center, Yale’s Iszak Henig, left, and Princeton’s Nikki Venema stand on the podium following a medal ceremony after Thomas won the 100-yard freestyle, Henig finished second and Venema third at the Ivy League women’s swimming and diving championships at Harvard, Saturday, Feb. 19, 2022, in Cambridge, Mass. Henig, who is transitioning to male but hasn’t begun hormone treatments yet, is swimming for the Yale women’s team and Thomas, who is transitioning to female, is swimming for the Penn women’s team. (AP Photo/Mary Schwalm)

The NCAA in January adopted a sport-by-sport approach for transgender athletes to document testosterone levels before championship selections. For high school sports, states have a hodgepodge of policies.

In Pennsylvania, the TV ad from the super PAC supporting Republican David McCormick tries to characterize Oz as a “Republican in Name Only,” or not conservative enough.

The ad rips a few seconds from the episode and presents it without the context of a show that looked at transgender children from a measured standpoint, with input from a pediatrician and their parents on the kids’ newfound happiness.

The clip in the attack ad stops after Oz gently asks the girl, from a military family, if she remembers when her parents thought she was a boy. The full episode continues:

“A little bit,” the girl answers.

“Talk to me about that a little bit,” Oz says. “What do you remember?”

The girl’s mother, sitting next to her, says: “Like, how did it make you feel when I used to take you and get your hair cut at the barber shop on base?”

“It made me very angry,” Josie answers.

“You did not like your hair cut,” the mother says. “Why not?”

Josie answers: “Because I’m a girl, not a boy.”

Josie and her mother could not be located for comment on being featured years later in a political attack ad.

“I think it’s incredibly sad when a political leader finds that the only way that they can get themselves elected to office is by attacking vulnerable children and their parents,” said Lisa Middleton, the transgender mayor of Palm Springs, California. “Of all the issues that are before us in this world and this country today … to make it more difficult for a transgender child and their parents to navigate their life to adulthood is irresponsible. It’s un-American.”

Republicans aren’t the only party that uses wedge issues — Democrats often cast the wealthy in a negative light for political gain.

But the GOP’s targeting of transgender people may have a shelf life, just as both parties’ efforts against same-sex marriage shifted along with public opinion, said Paul Goren, a political psychology professor at the University of Minnesota. If it doesn’t pay off with electoral wins, he said, then Republicans will move on.

In Texas, Abbott’s letter came just a week before the state’s Republican primary, the nation’s first for the 2022 cycle. It aligns with a recent legal opinion from state Attorney General Ken Paxton, a Republican who is also running for reelection, that is directed at gender-confirming treatments incorporating puberty blockers and hormone therapy.

An Arkansas law banning such treatments for anyone under 18 years old has been blocked by a federal judge, while other states are considering similar legislation.

Pushback in Texas is coming from civil liberties groups, medical professionals and district attorneys in some counties.

Kimberly Shappley, a Texas nurse and mother of an 11-year-old transgender girl, Kai, said she was distraught and had begun looking for a job in another state. The family has already been on edge for years over efforts to prevent transgender children from using public bathrooms that match their identity, she said.

“As the parent of a trans kid, I can tell you that our close-knit community is just a wreck,” Shappley said on a video news conference organized by the American Civil Liberties Union. “It’s just been a lot of tears. It’s been a lot of, ‘Do we have our documents in order? Do we have our plan in place? Is this the time we have to move?’”

But it’s hard to know where to go, she said.

“The whole United States is on fire with anti-trans legislation. It’s not just Texas,” Shappley said. “What is the safe place that you think trans kids can live right now? Because there’s not that many left.”