Smoke rise from an air defence base in the aftermath of an apparent Russian strike in Mariupol, Ukraine, Thursday, Feb. 24, 2022. Russian troops have launched their anticipated attack on Ukraine. Big explosions were heard before dawn in Kyiv, Kharkiv and Odesa as world leaders decried the start of Russian invasion that could cause massive casualties and topple Ukraine's democratically elected government. (AP Photo/Evgeniy Maloletka)

Republicans and Democrats are both blasting Russia's military strikes, but the GOP is using the moment to criticize President Joe Biden. 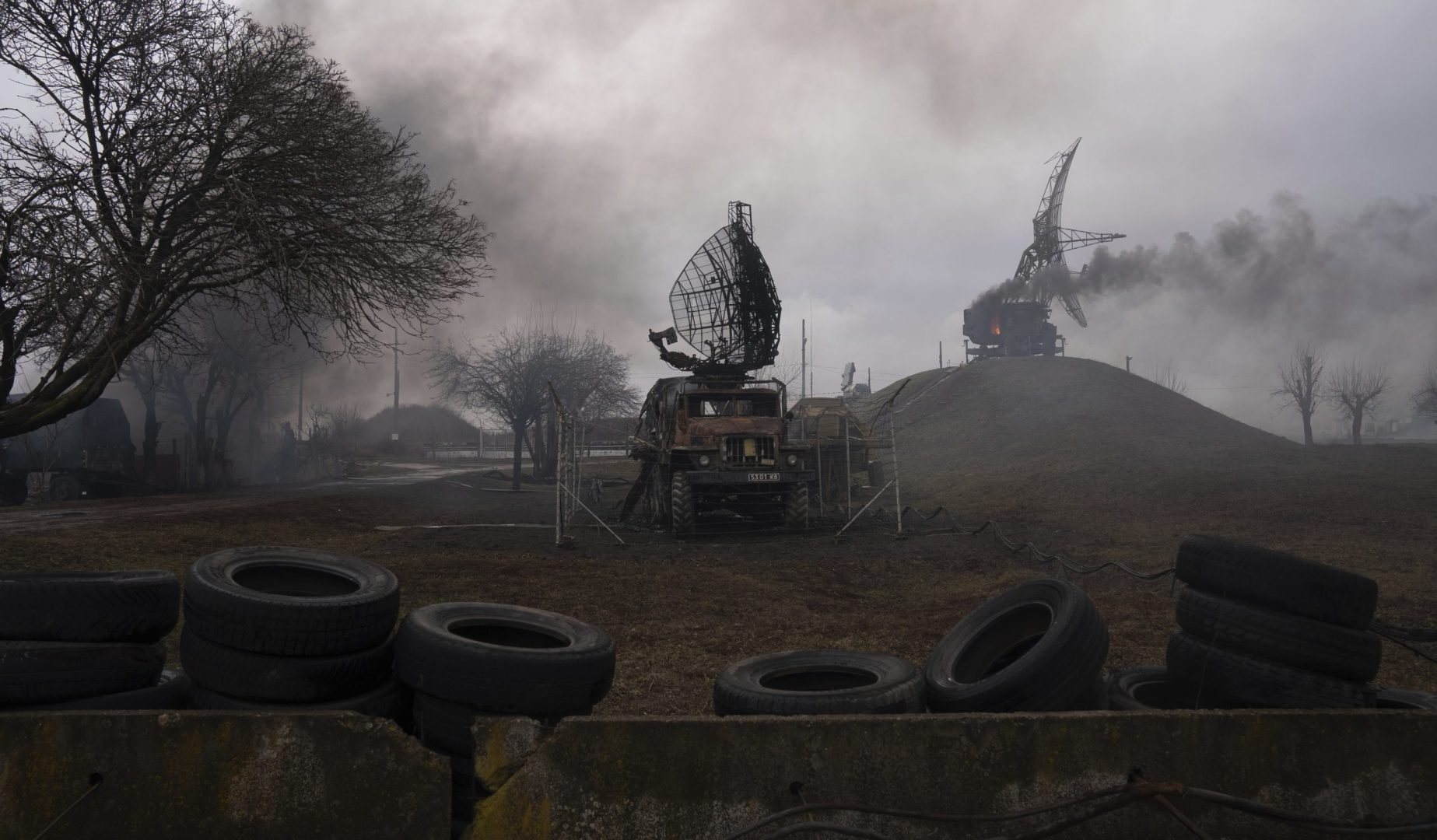 Smoke rise from an air defence base in the aftermath of an apparent Russian strike in Mariupol, Ukraine, Thursday, Feb. 24, 2022. Russian troops have launched their anticipated attack on Ukraine. Big explosions were heard before dawn in Kyiv, Kharkiv and Odesa as world leaders decried the start of Russian invasion that could cause massive casualties and topple Ukraine's democratically elected government. (AP Photo/Evgeniy Maloletka)

(Harrisburg) – Russian troops have reportedly moved into Ukraine from the country’s north, east and west in what Russian President Vladimir Putin said is a bid to “demilitarize” the nation of more than 44 million people. Areas across Ukraine, including some near the country’s capital city of Kyiv, have been attacked.

Members of Central Pennsylvania’s Congressional delegation are joining others in condemning the attack.

Most have urged President Joe Biden and NATO countries to retaliate against Russia. Some have offered shows of solidarity with Ukraine, while others argued for the need to reduce the western world’s reliance on Russia for natural resources.

Biden announced additional sanctions against Russian financial institutions and imports of things like semiconductors during a Thursday news conference. He vowed to defend NATO countries with the “full force” of U.S. military power, but repeated that U.S. troops will not fight in Ukraine.

Here’s what Central Pa.’s members of Congress are saying about the crisis:

Democratic U.S. Rep. Madeleine Dean tweeted for Putin to be held accountable for pushing into Ukraine despite months of diplomatic negotiations between Russia and NATO countries. She offered “prayers” for the Ukrainian people, who she argues are enduring an existential attack.

My prayers are with the people of Ukraine as they face unprovoked and unjust attacks across their sovereign nation at the hands of a dictator.

Mr. Putin is responsible for the devastation and must be held accountable for bringing violence and instability to Europe and the world.

Democratic Congresswoman Chrissy Houlahan tweeted Putin’s action would not go unpunished, adding in a separate statement that if the U.S. and NATO fail to act, it would communicate to dictators that the West’s allies are unimportant and its values are negotiable.

Today is a sad day for humanity and democracy.

Putin’s premeditated and unprovoked act of aggression against Ukraine cannot and will not go unpunished.

“They are watching what we do here,” Houlahan wrote in a statement. “Doing nothing now will increase the likelihood that our military has to get engaged to keep America safe — something we, and our allies around the world, deeply want to avoid.”

Houlahan is a former captain in the U.S. Air Force and worked in ballistic defense at the end of the Cold War. She went to Ukraine as part of a bipartisan congressional delegation in late January and was calling for a “unified response” that would include sanctions, humanitarian aid and military support to Ukraine.

Republican Congressman Dan Meuser said in an interview the U.S. should do “what it has to do” to prevent the Ukrainian conflict from spreading into other countries or regions.

Meuser said the Biden administration should not have taken troop deployments “off the table,” but added neither he nor his colleagues want to see American service members deployed into the conflict.

Russia has now taken the largest military action in Europe since World War II, something Meuser argues should have been more strongly deterred in Biden’s first year in office. Satellites detected Russian troop buildup along Ukraine’s borders as early as November.

“We need to work with the Ukrainians. We need to have the highest level of sanctions now and we needed to implement them before they went in,” Meuser added.

When asked if he thought former President Donald Trump should have fostered close ties with Putin while Russia was launching cyber attacks against the West, Meuser said Russia did not try to invade Ukraine despite Putin’s long-held ambitions to bring the country back under Russian influence.

“I don’t want to just defend President Trump, but the fact is it [Russia] didn’t,” he said.

Trump was impeached by the U.S. House in December 2019 for attempting to pressure Ukraine to dig up damaging information about his rival in the presidential campaign, Joe Biden.

York County Republican U.S. Rep. Scott Perry characterized Putin’s actions as “expansionist tyranny,” and claimed Russia was partly motivated to launch an offensive against Ukraine because it sees a “weak and incompotent POTUS.”

As we pray for the Ukrainian people, make no mistake: THIS is what happens when America’s enemies see a weak and incompetent @POTUS. #Ukraine #BidenIsAFailure

Biden held diplomatic talks with Putin aimed at de-escalating the possibility of war in Ukraine for months, but the two increasingly called one another “aggressors” as those talks went on. The first-term Democrat sought to expose Russia’s military plans at every turn in the hopes of deterring Putin.

Perry criticized former Secretary of State John Kerry for not doing enough to prevent the 2014 annexation of the Ukrainian peninsula of Crimea. Russia recognized that area as an independent state not long after it invaded, and did so for two other areas held by pro-Russian rebels earlier this week.

The midstate Republican suggested the U.S. should restart construction of the controversial Keystone XL pipeline in a bid to replace Russian oil exports to Europe and the U.S. Biden canceled the pipeline project when he took office over concerns about climate change. The president discouraged American oil companies from “exploit[ing] this moment to hike their prices” in his Thursday afternoon address.

The Russian invasion and unprovoked attacks on Ukraine at Putin’s direction are unacceptable and depraved. The Biden administration, our NATO, and international allies must stand together to support Ukraine against this needless aggression.

“He must expedite approval of U.S. energy infrastructure, including pipelines & liquified natural gas export facilities, & allow the U.S. to be the lowest-cost provider of clean energy at home  and abroad,” Keller tweeted.

Amidst the ongoing crisis in Ukraine, President Biden recently promised to supply energy to our European allies, with the aim of reducing the region’s dependence on Russian natural gas.

“The world is watching us right now, and now’s the time to step up and provide those necessary energy supplies throughout the world. Those energy sources are under the feet of Americans,” he said.

He also voiced concerns on how the conflict could have ripple effects in various sectors of the world economy.

He says the United States must act swiftly to impose the most severe sanctions on the Russian government and oligarchs.

Putin alone is responsible for last night’s death and destruction in Ukraine. The international community stands united with Ukraine and we will move swiftly to enact consequences against Putin for this unprovoked attack.

My prayers are with the Ukrainian people.

Putin has launched a war of aggression against a neighboring state. His war will cost many thousands of innocent lives and threaten security around the world.

One more drops from the Republican field for Pennsylvania governor