Michael Schneider, a retired Marine Corps Master Sergeant, plays a ukulele in his leatherworking studio at his home in Swansboro, North Carolina on February 12, 2022. He uses art and music therapy to help manage his epilepsy and PTSD following a traumatic brain injury. Schneider explains that by playing music, he can literally stop himself from having a seizure by affecting how his brain is functioning.

Art and music therapy seem to help with brain disorders. Scientists want to know why

"I'd lost hope. I didn't really believe that I was going to make it through the next couple of years. My brain was just shutting down." 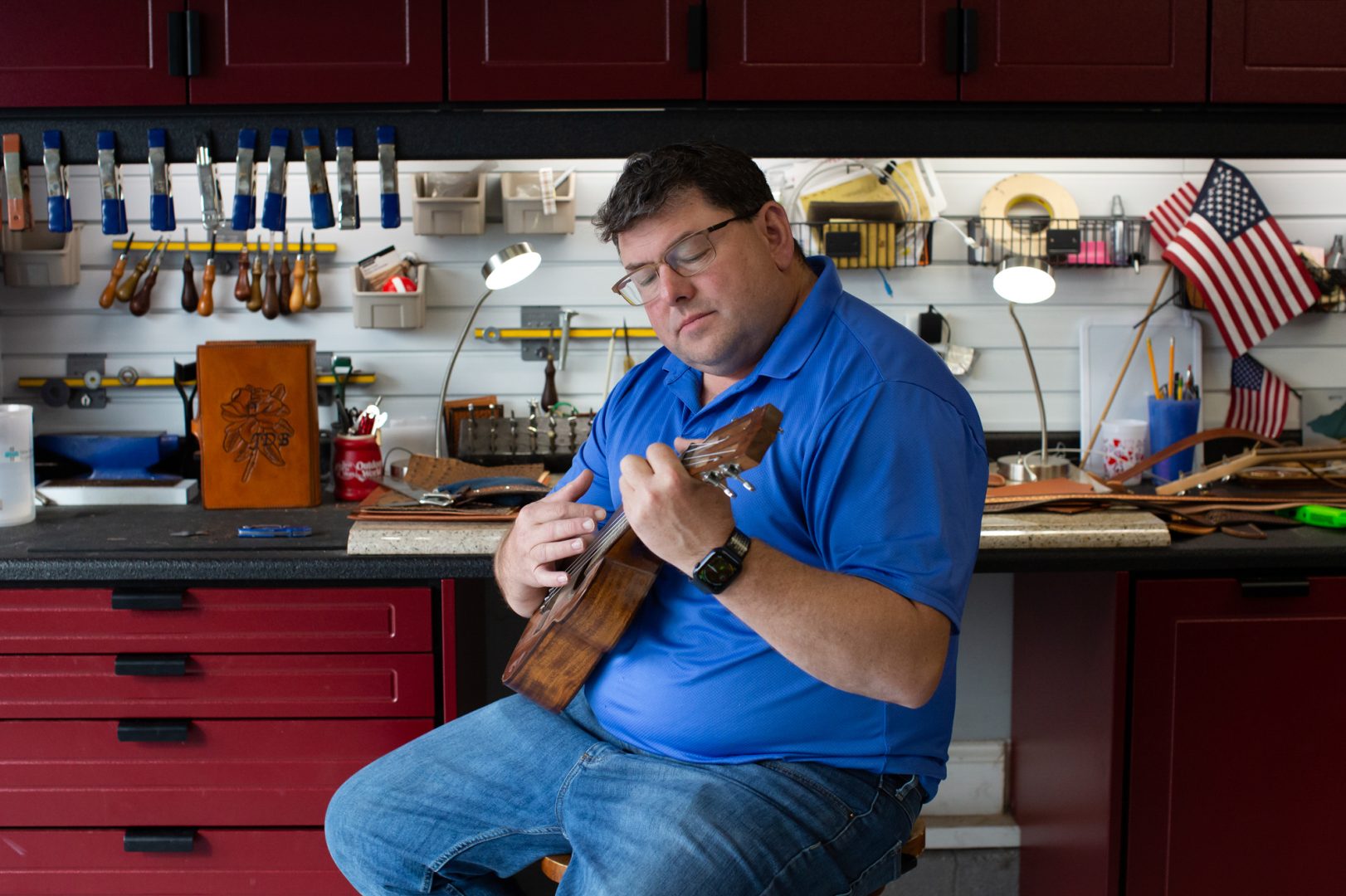 Michael Schneider, a retired Marine Corps Master Sergeant, plays a ukulele in his leatherworking studio at his home in Swansboro, North Carolina on February 12, 2022. He uses art and music therapy to help manage his epilepsy and PTSD following a traumatic brain injury. Schneider explains that by playing music, he can literally stop himself from having a seizure by affecting how his brain is functioning.

When Michael Schneider’s anxiety and PTSD flare up, he reaches for the ukulele he keeps next to his computer.

“I can’t actually play a song,” says Schneider, who suffered two serious brain injuries during nearly 22 years in the Marines. “But I can play chords to take my stress level down.”

It’s a technique Schneider learned through Creative Forces, an arts therapy initiative sponsored by the National Endowment for the Arts, in partnership with the departments of Defense and Veterans Affairs.

It’s also an example of how arts therapies are increasingly being used to treat brain conditions including PTSD, depression, Parkinson’s and Alzheimer’s.

But most of these treatments, ranging from music to poetry to visual arts, still have not undergone rigorous scientific testing. So artists and brain scientists have launched an initiative called the NeuroArts Blueprint to change that.

The initiative is the result of a partnership between the Johns Hopkins International Arts + Mind Lab Center for Applied Neuroaesthetics and the Aspen Institute’s Health, Medicine and Society Program. Its leadership includes soprano Renée Fleming, actress and playwright Anna Deavere Smith, and Dr. Eric Nestler, who directs the Friedman Brain Institute at Mt. Sinai’s Icahn School of Medicine.

One goal of the NeuroArts initiative is to measure how arts therapies change the brains of people like Schneider.

“I had a traumatic brain injury when I was involved in a helicopter incident on board a U.S. Naval vessel,” he explains. That was in 2005.

Later that same year, he experienced sudden decompression – the aviator’s version of the bends — while training for high-altitude flights. The result was like a stroke.

“On my right side of my body I lost all feeling,” he says. 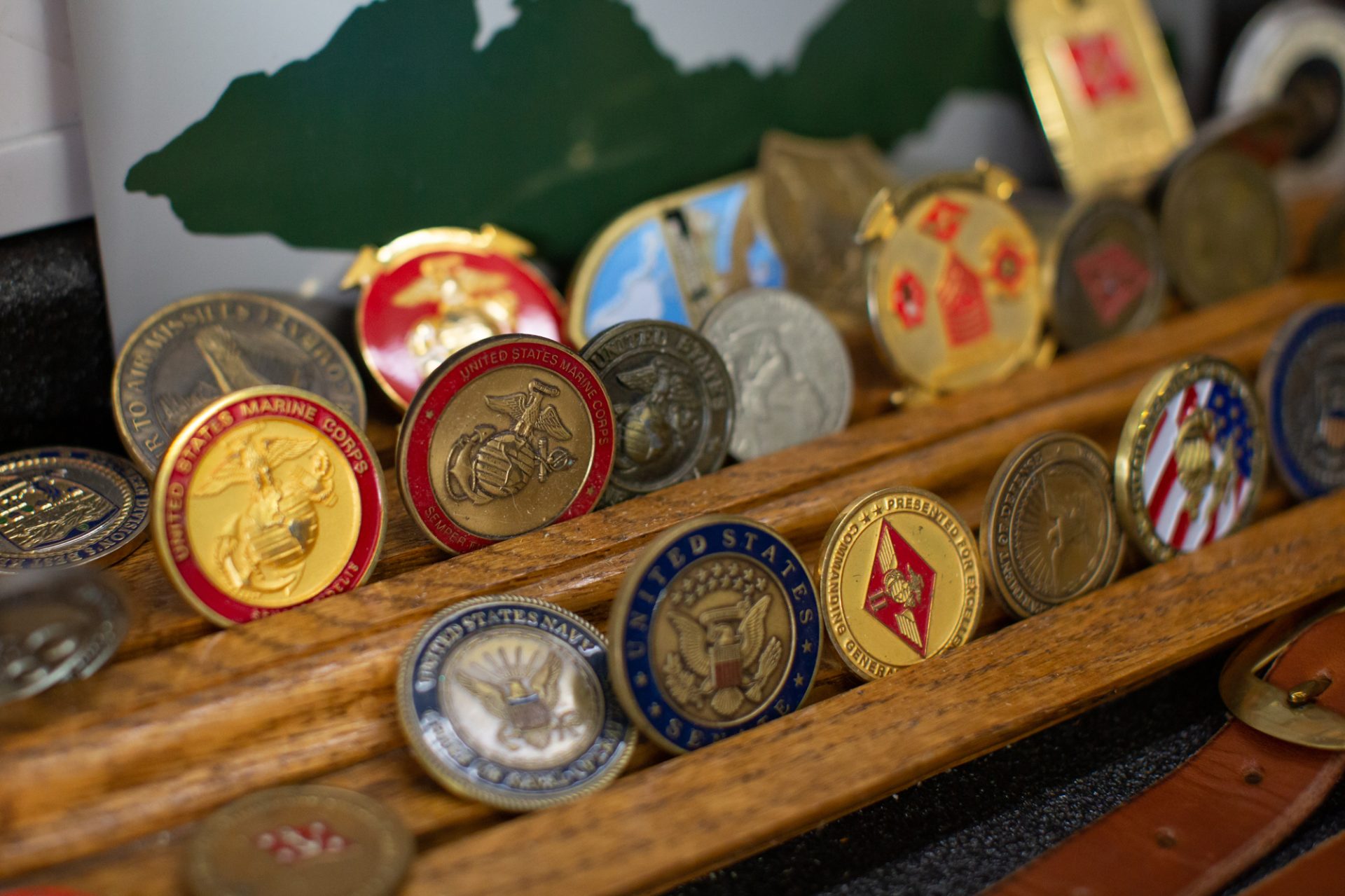 Challenge coins that Michael Schneider, a retired Marine Corps Master Sergeant, has received over the years sit in his garage studio at his home in Swansboro, North Carolina on February 12, 2022. Schneider has been doing leatherwork for the past five years as therapy to help manage his epilepsy and PTSD following a traumatic brain injury. He has also been teaching leatherworking to other veterans.

Schneider recovered from both incidents. But they took a toll on his brain. And in 2014, he began having serious problems.

“I had this progression of really bad seizures,” he says. “At one point I was having 20 to 40 seizures a day.”

He also developed symptoms of post-traumatic stress disorder, known as PTSD, and depression. Schneider went to Walter Reed National Military Medical Center in Bethesda for treatment. But he wasn’t getting better.

“I’d lost hope,” he says. “I didn’t really believe that I was going to make it through the next couple of years. My brain was just shutting down.”

That’s when military doctors referred Schneider to Rebecca Vaudreuil, a music therapist at Creative Forces and the Henry M. Jackson Foundation. Early on, Vaudreuil learned something intriguing about the big Marine from Marquette, Michigan.

“He had a history in doing theater arts,” she says. “And so I could tell, you know, there was some priming there.”

Vaudreuil had Schneider play a few notes on a piano.

“I started to hum the notes and she’s like, ‘You can sing,'” he recalls.

That led to a lot of musical exploration, including the ukulele. It also helped Schneider start talking about his struggles and gave him a way to reduce his seizures and relieve some of his anxiety and PTSD. 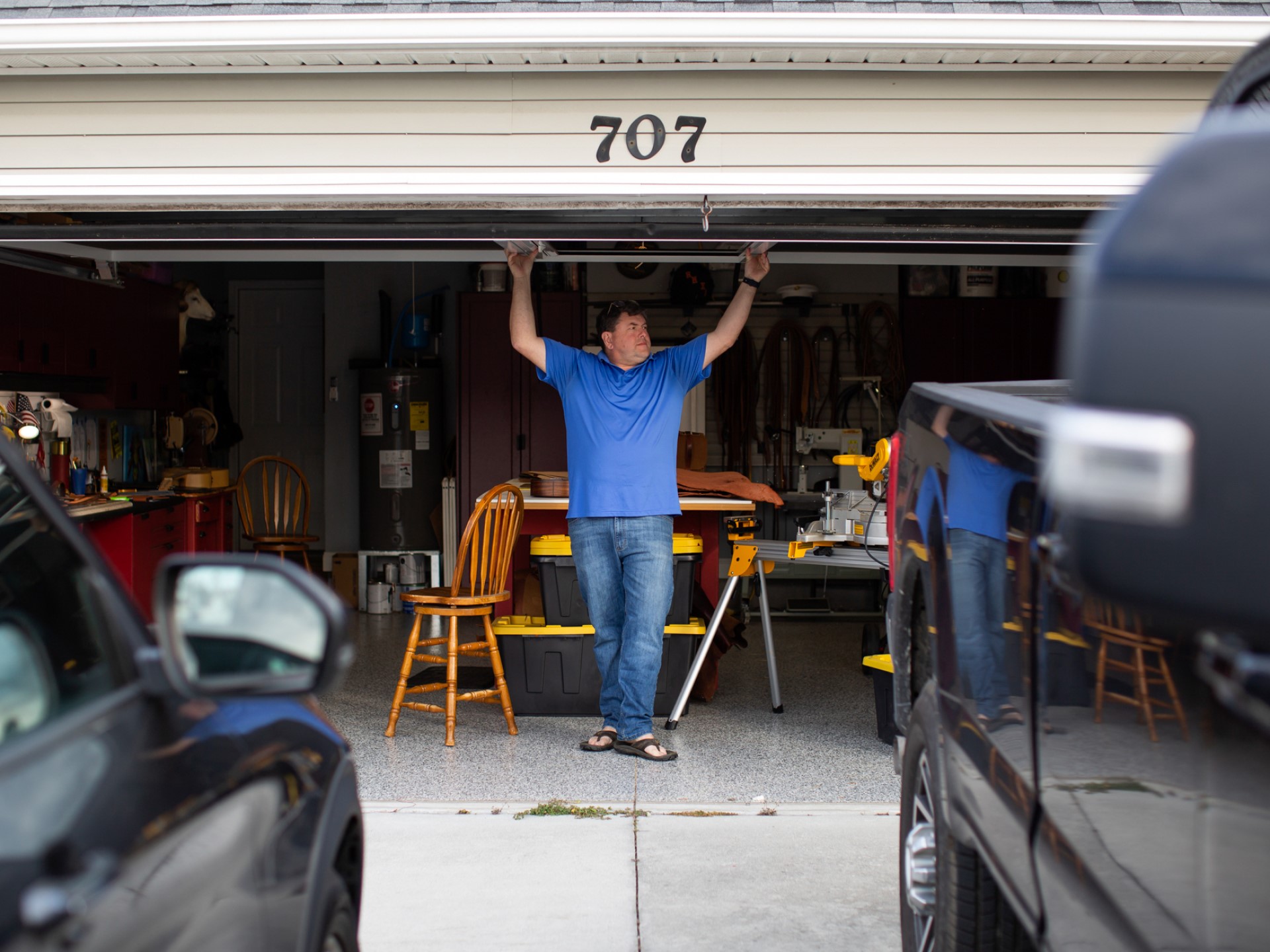 “Relearning music took away that fight-or-flight, that ingrained piece of how I trained,” he says. “It was able to open up all these new pathways through my brain.”

Personal experiences like Schneider’s are beginning to get some scientific confirmation, Vaudreuil says.

“We know that when we receive music, even when we hear music, we’re activating multiple parts of the brain,” she says. And studies suggest that this strengthens brain circuits that help repair damage.

There are also hints that the brain changes in response to other art therapies, like dance, poetry, painting, sculpture, even leatherwork. But so far, there hasn’t been much scientific study to back that up. 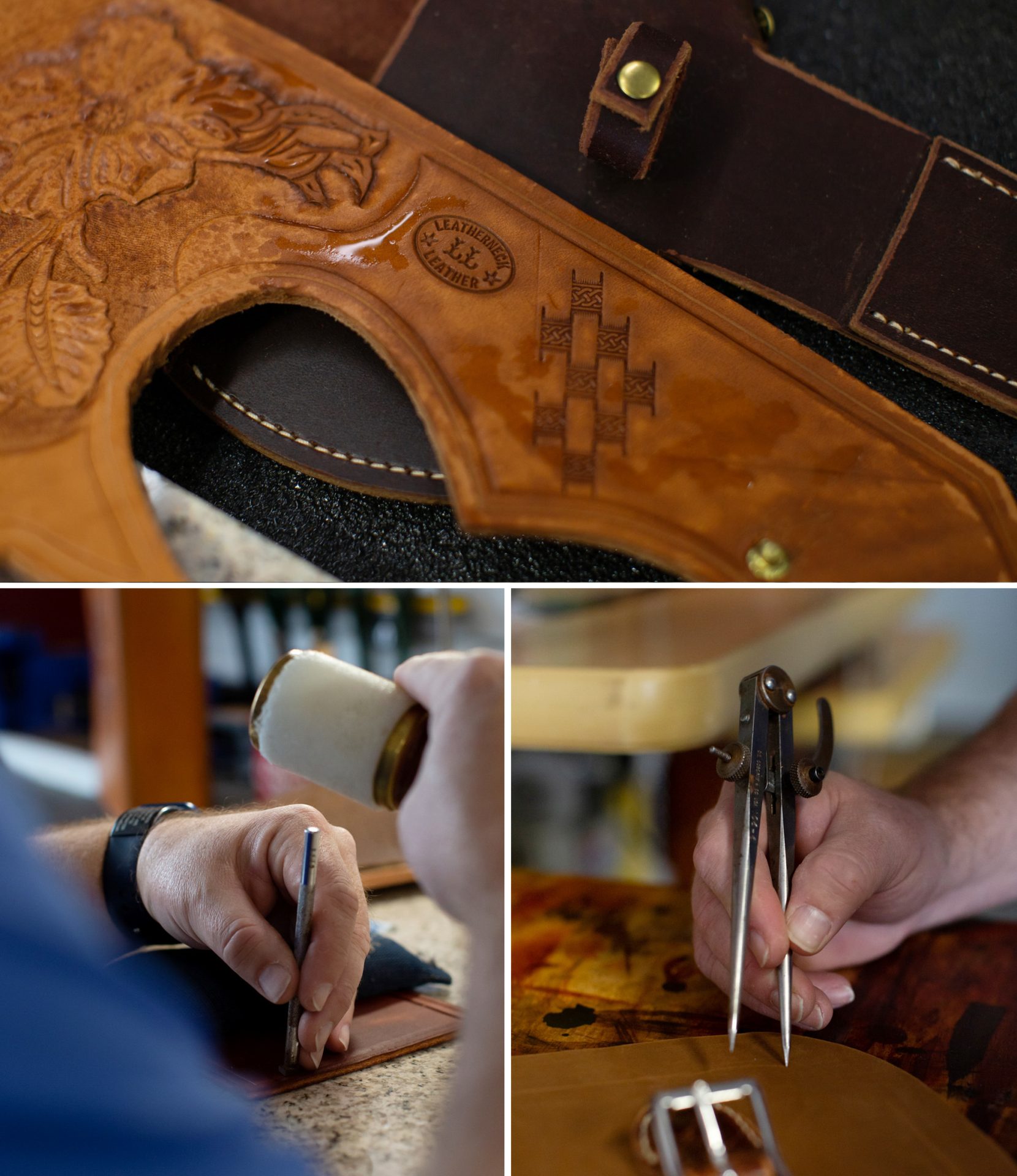 Leather stamping tools sit in Michael Schneider’s garage studio at his home in Swansboro, North Carolina on February 12, 2022. Schneider, a retired Marine Corps Master Sergeant, uses art and music therapy to help manage his epilepsy and PTSD following a traumatic brain injury. The Semper Fi Fund, which supports injured military service members and veterans, built Schneider’s studio and he in turn has been teaching leatherworking through their programs.

“We’re going to need to provide the robust, empirical data demonstrating that there is efficacy,” says Nestler, a co-chair of the NeuroArts initiative advisory board.

“It’s harder in some ways to do that with music or art than with a new medication,” he says. “On the other hand, I think it’s very doable.”

For example, there are lots of anecdotal reports of Alzheimer’s patients who can no longer speak, but will begin singing and become more interactive when they hear a familiar song.

“Now, in addition to reporting the behavioral changes, one could identify a greater level of activity in circuits in the brain related to memory and emotions,” Nestler says.

Fleming, another co-chair of the advisory board, has actually seen the effect of singing on her own brain.

During a visit to the National Institutes of Health in 2017, she agreed to perform while inside an MRI scanner.

“They had me singing, imagining singing and speaking,” she says. “They would probably have guessed that singing would have the largest effect on my brain, but it didn’t. It was imagining singing.” 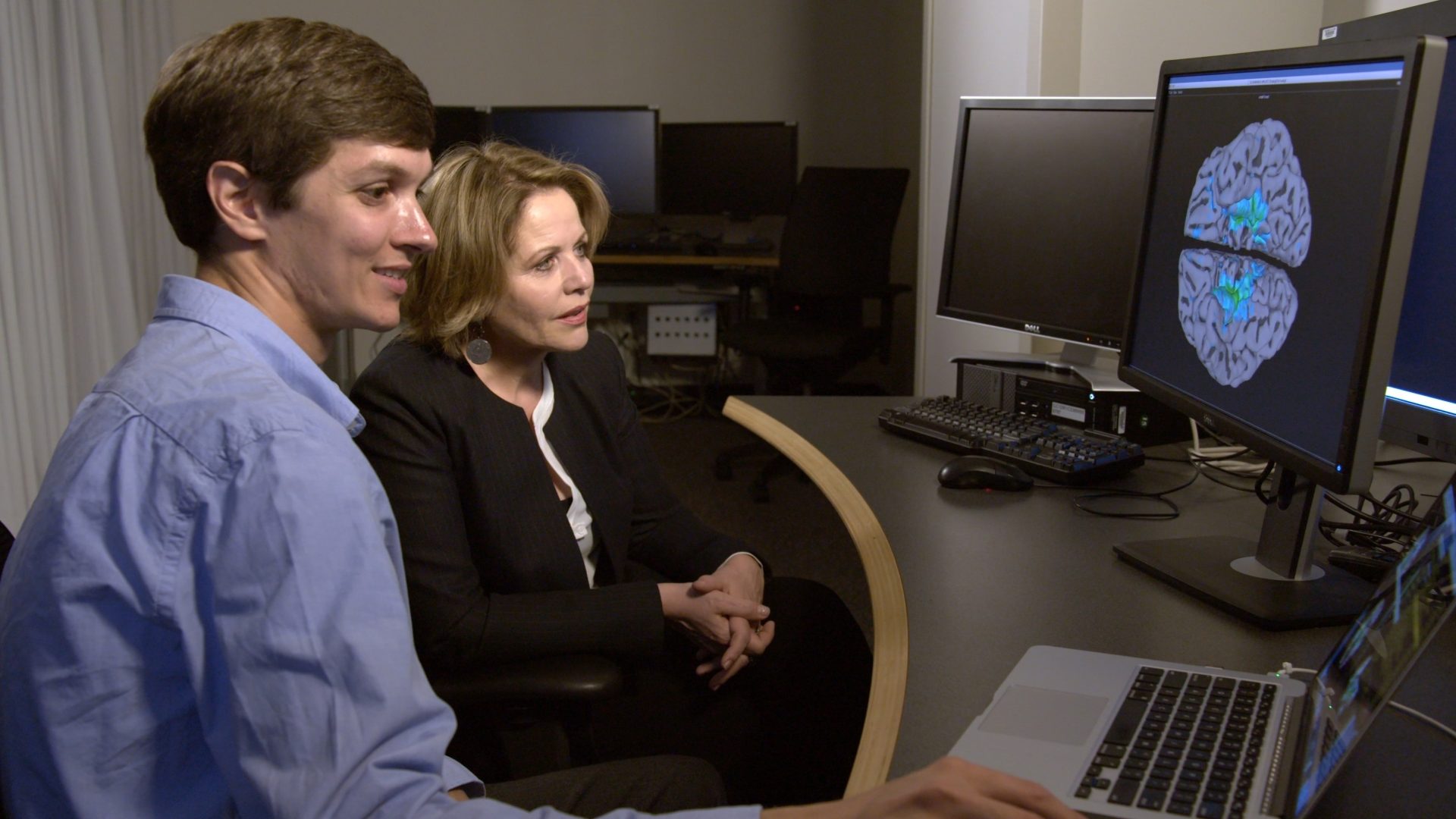 National Institutes of Health via AP

For Fleming, the existence of something like the NeuroArts Blueprint represents a big and important shift in thinking since the early days of her career.

“I had terrible stage fright. I had somatic pain from performance pressure,” she says. But at the time, doctors tended to dismiss symptoms involving the link between mind and body.

So now Fleming makes a point of using her performance trips to meet with brain scientists and arts therapists.

“I saw a music therapist working with a gentleman who’d had a stroke and couldn’t speak,” she says. “And within one session of singing he could communicate.”

In order to understand why that happened, she says, neuroscientists and artists need to create a new field of expertise: neuroarts.

“We’ve realized how our two worlds can merge in this really interesting way,” he says. 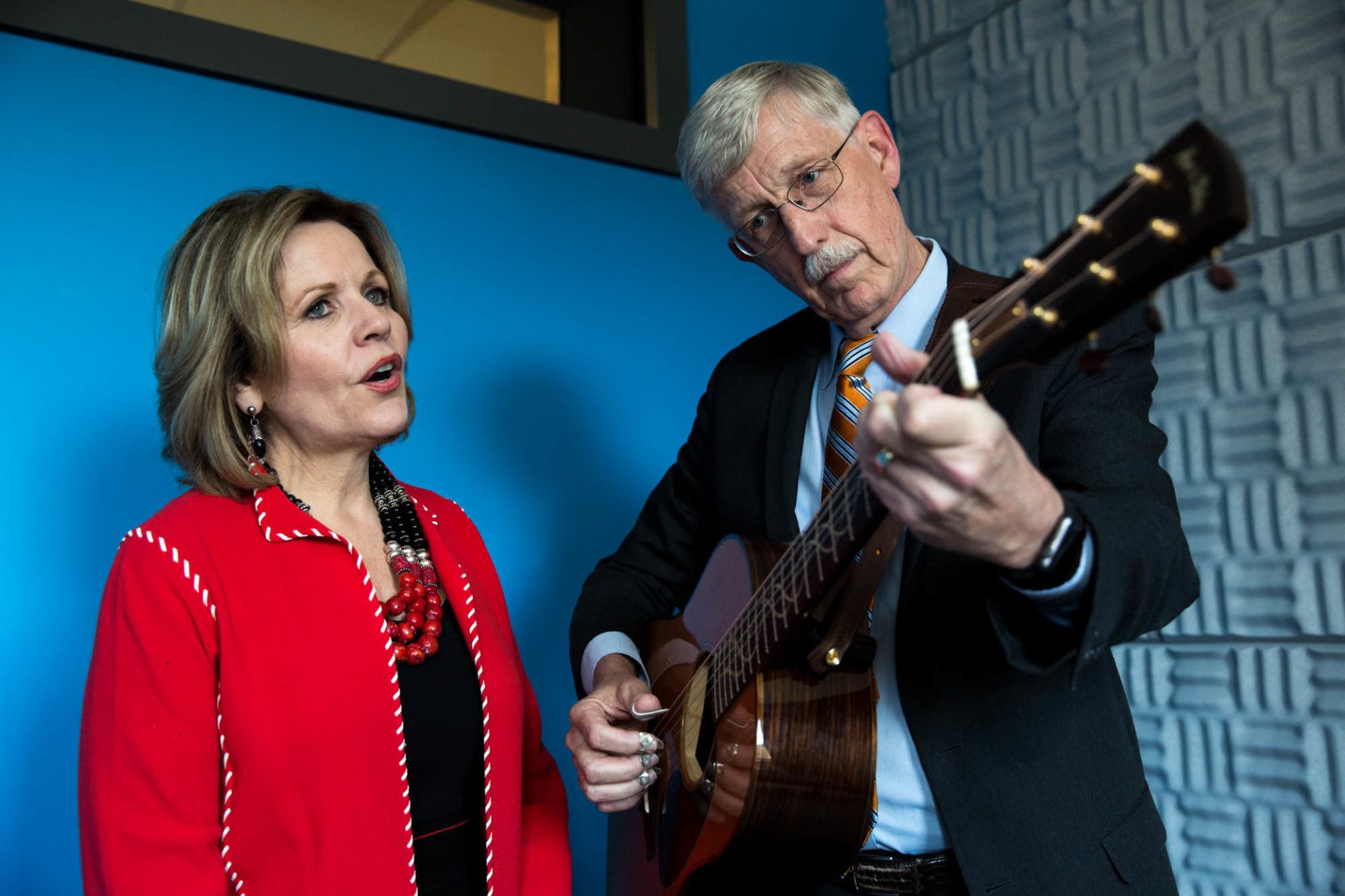 NIH Director Francis Collins and Renée Fleming, who is Artistic Advisor at Large for the Kennedy Center in Washington, D.C., sing a duet

But Nestler says even with good scientific evidence, arts therapies are likely to face obstacles to gaining widespread acceptance and support.

“No one asks a question about paying $100,000 or more for spinal surgery,” he says. But coverage of music therapy for a brain condition, he says, “that is going to be a major struggle.”

Newer version of omicron variant spreads in the region. How worried should you be?