Crosby is the second active player to reach 500 goals, joining Washington's Alex Ovechkin. He is the 18th player to make it to 500 while playing for one team. 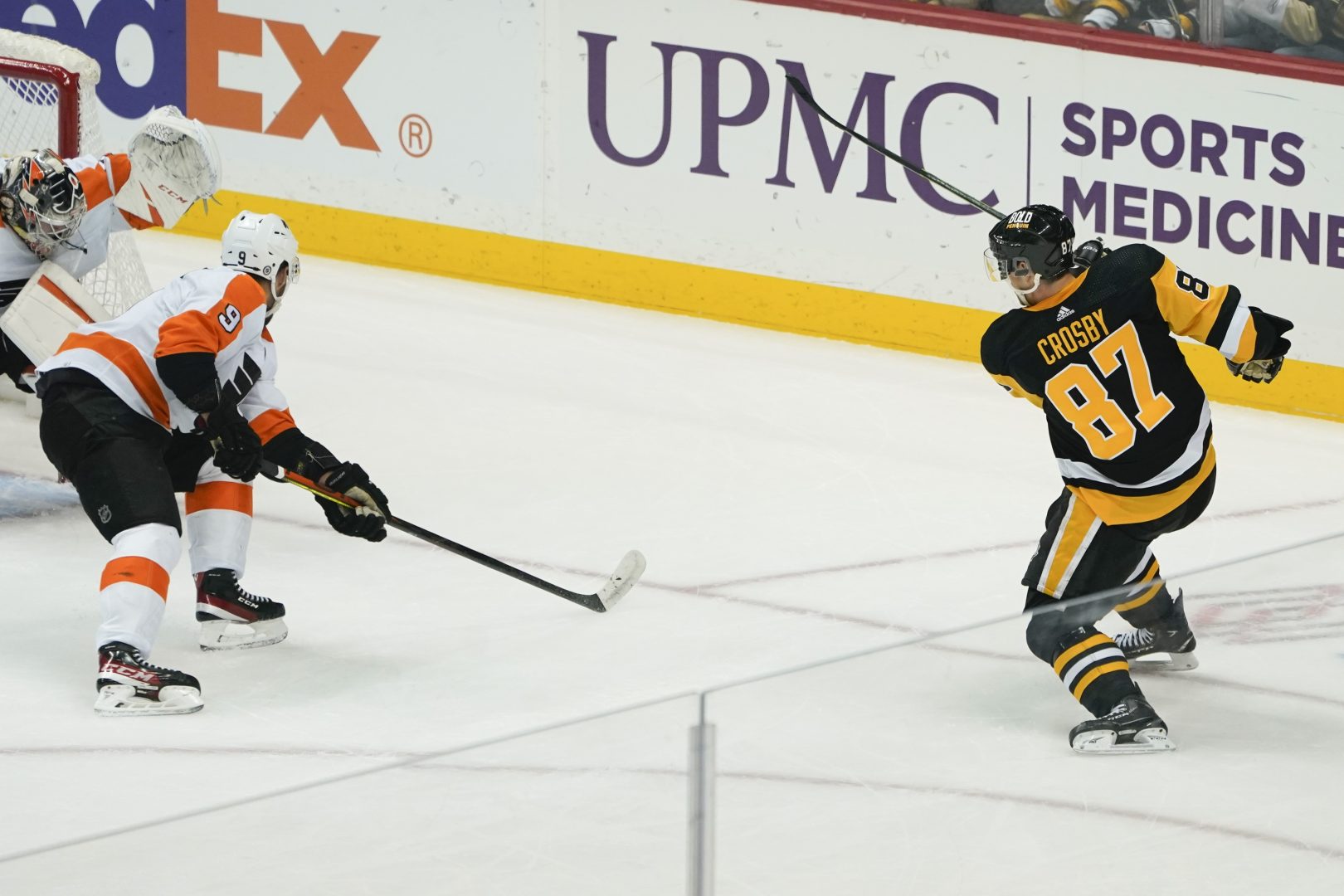 (Pittsburgh) — Sidney Crosby never makes it about himself. Ever.

Stanley Cups. Scoring titles. MVP awards. Conn Smythe trophies. The Pittsburgh Penguins star never met a milestone he didn’t try to share as quickly as possible with as many people as possible.

Crosby’s 500th goal was no different. The moment he became the 46th player in NHL history to reach the benchmark during a 5-4 overtime victory against the Philadelphia Flyers on Tuesday night, his teammates poured over the boards to mob him in the corner.

Crosby’s familiar No. 87 became temporarily lost in a sea of faces. Fitting for a player who almost pathologically considers himself one of the guys, even if his considerable talents mean he’s anything but.

“All the guys coming on the ice, that’s something I’ll always remember,” Crosby said. “A lot of joy, just happy and try and take in the moment.”

Yet it’s what happened in the third period and overtime that’s perhaps more symbolic of Crosby’s career.

“Of course, you want that game, that memory to be a win,” Letang said. “You don’t want to remember (Crosby’s) 500th goal in a loss, especially to a rival like this.” 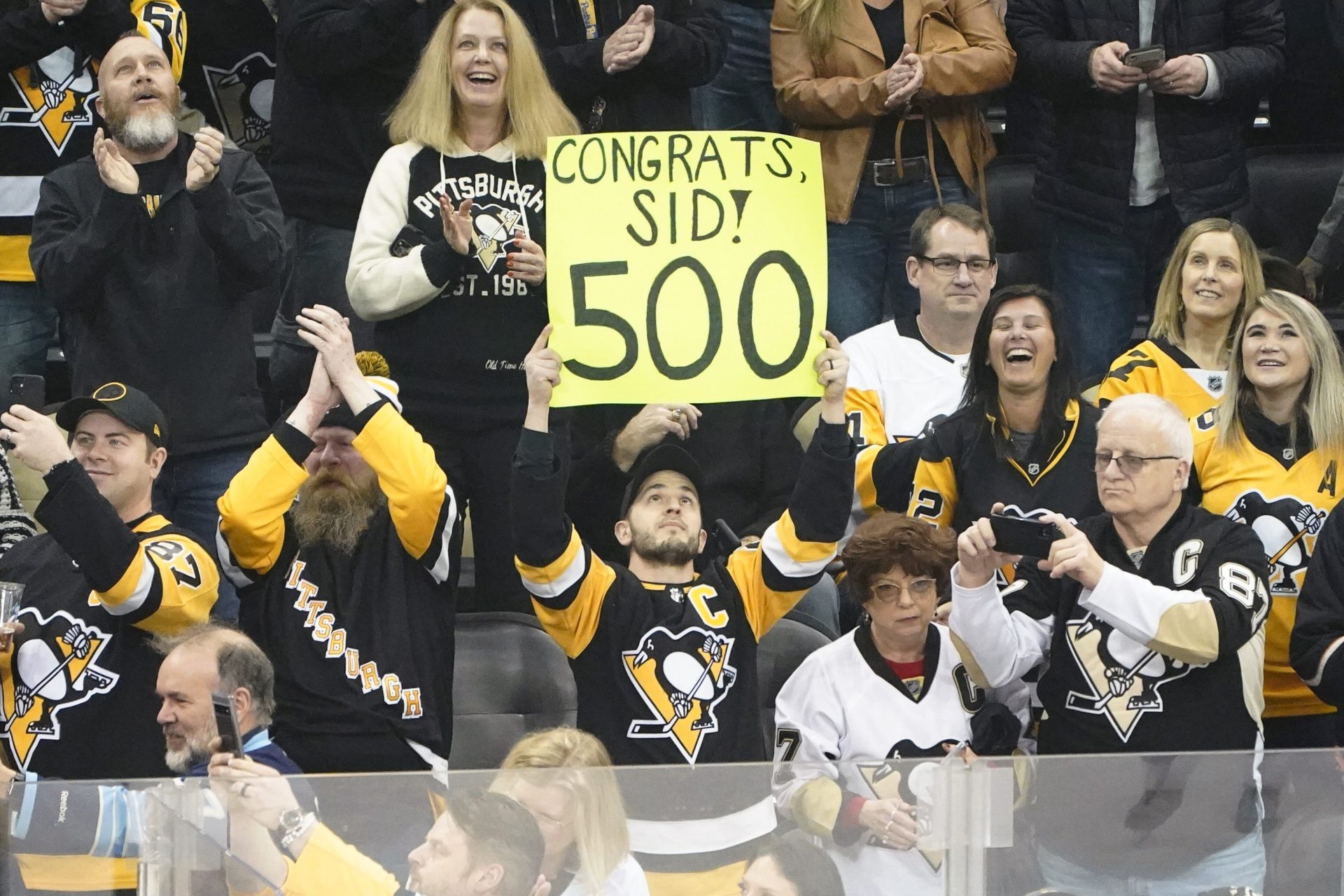 A fan holds up a sign recognizing the 500th goal after Pittsburgh Penguins’ Sidney Crosby, (87) scored his 500th NHL career goal against the Philadelphia Flyers, during the first period of an NHL hockey game, Tuesday, Feb. 15, 2022, in Pittsburgh.

Crosby is the second active player to reach 500 goals, joining Washington’s Alex Ovechkin. He is the 18th player to make it to 500 while playing for one team, and he made the Penguins just the sixth franchise to have multiple 500-goal scorers, joining Hall of Famer Mario Lemieux.

Heady territory for a player who has so deftly handled being one of the league’s standard-bearers from the moment he arrived with the top pick in the 2005 draft. And he’s taken special care in tormenting the Flyers with regularity for most of his 16-plus seasons.

With the Penguins on the man advantage late in the first period, he perched himself along the goal line, took a cross-ice feed from longtime teammate Evgeni Malkin and fired a wrist shot to Carter Hart’s short side that handcuffed the goalie and smacked into the back of the net.

The three-time Stanley Cup winner and future Hall of Famer — who refused to talk about reaching such rarified air before it happened — broke into a wide smile as his parents and the rest of the sellout crowd erupted.

Perhaps it was fitting the primary assist went to Malkin — the franchise’s other pillar for the better part of the last two decades — and that it came against the Flyers. A full 10% (50) of Crosby’s career goals have come against Philadelphia.

The crowd chanted Crosby’s name after the goal and gave him another loud ovation during a stoppage in the second period that included a videotaped congratulatory message from Lemieux, whom Crosby famously roomed with when he entered the league as a fresh-faced 18-year-old.

Now he joins Lemieux in some pretty exclusive company, a notion not lost on a player with a deep appreciation of the history of the game he’s helped define.

“It’s hard to put into words,” Crosby said. “I think just being able to be part of some great teams over the years, play with some great players. It’s a cool number. You look at the guys who score 500 goals, I think it’s just a privilege to be part of that company.”

Company Crosby joined in victory thanks to some late heroics from Jake Guentzel and Chad Ruhwedel, who scored 18 seconds apart in the third period to erase a two-goal deficit. Dominik Simon also scored for Pittsburgh, and Casey DeSmith stopped 23 shots as the Penguins stayed atop the Metropolitan Division by sending the Flyers to their third consecutive loss.

Scott Laughton, Nick Seeler and Justin Braun scored during a second-period outburst as the Flyers sprung to life after Crosby’s goal. Hart finished with 29 saves but lost his third straight start when he couldn’t get a handle on Letang’s game-winner.

Claude Giroux also scored for Philadelphia, which saw itself on the wrong end of a signature Crosby moment once again, though that didn’t stop a few of the Flyers from tapping the boards out of respect for a player who has dominated them for years.

“Obviously, he’s a heck of a player,” Seeler said. “So congratulations to him, but it’s tough when it’s against you.”