A meeting of the Legislative Reapportionment Commission on Feb. 4, 2022 at the state Capitol building in Harrisburg.

The Legislative Reapportionment Commission approved the updated maps 4-1 and now the public will weigh in on the maps. 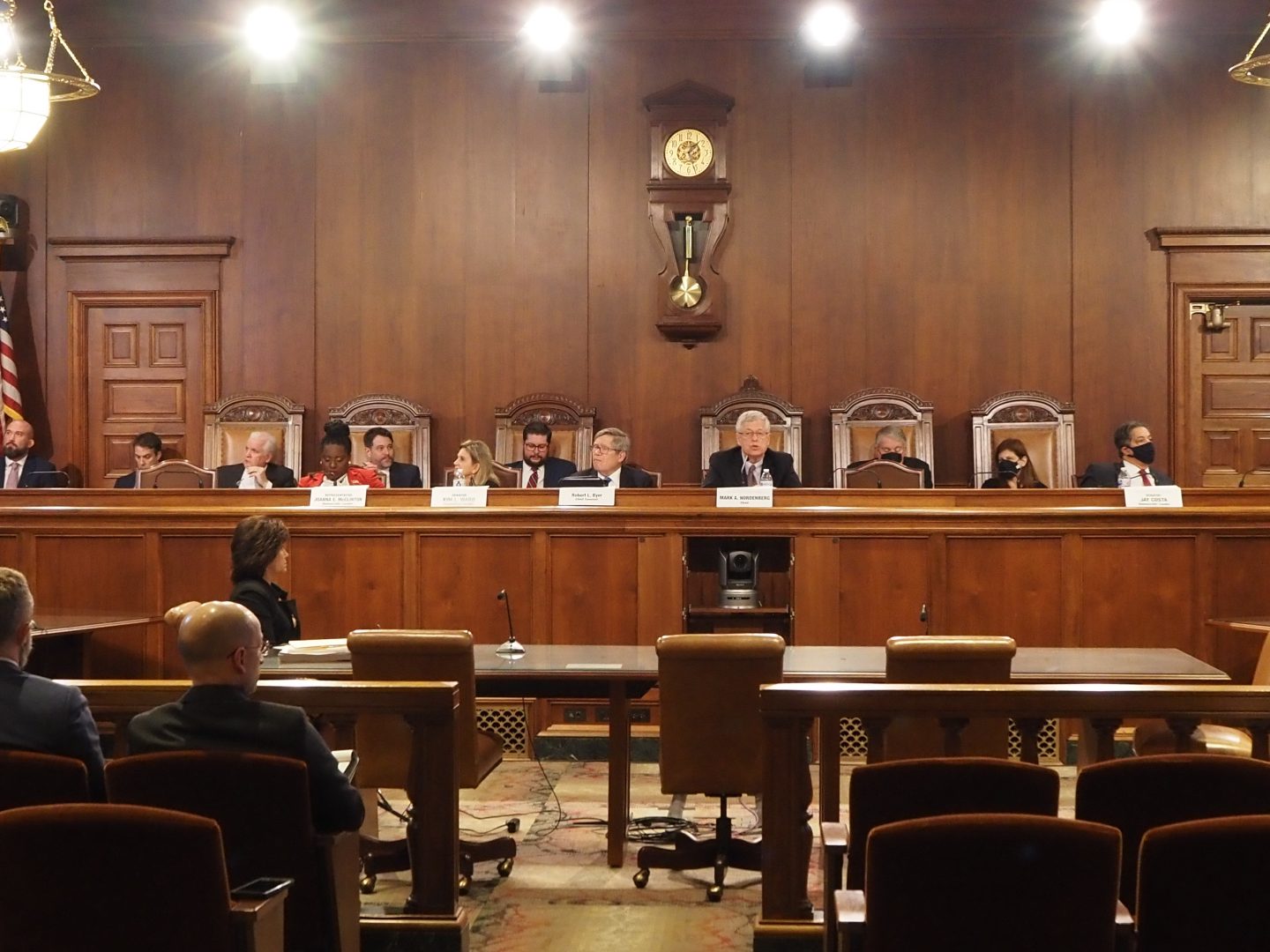 A meeting of the Legislative Reapportionment Commission on Feb. 4, 2022 at the state Capitol building in Harrisburg.

(Harrisburg) – A five-member panel in charge of redrawing Pennsylvania’s state House and Senate districts is moving ahead with tweaked map proposals.

During a Friday meeting, the Legislative Reapportionment Commission approved a set of updated maps 4-1. By doing so, it agreed to offer those plans up to the public. People can challenge the plans directly with the state Supreme Court for the next 30 days.

Republican Senate Leader Kim Ward (R-Westmoreland) joined both Democratic legislative leaders on the panel and Chairman Mark Nordenberg in voting “yes” on the plans. That move was unusual because the commission has decided most other map matters strictly along party lines.

The updated maps carve up counties a few more times than than the initial proposals did, but less than the current maps do. The state constitution and Supreme Court both say redistricting plans must keep municipal splits to a minimum in order to pass legal muster.

According to non-partisan map analysis tool Dave’s Redistricting App, the new Senate map splits 23 counties up 47 times – while an initial proposal split 22 counties up 42 times. The new House map splits 45 counties a total of 186 times. Initially, the same number of counties were split, but 184 times.

That same analysis tool shows the new districts would be slightly less competitive than initially proposed. There would be just nine Senate districts and 27 House districts with an even enough split of voters to make it possible for a candidate from either party to win office. By comparison, the initial maps would have set up 13 such districts for the Senate and 34 for the House.

The plans also create ​​nine open seats in areas where non-white voters make up a majority. There were initially eight of those seats. Mapmakers created an additional Senate district in Philadelphia with those parameters.

They also appear to allow slightly more incumbent lawmakers to keep their seats. A group of two Republicans and two Democrats, which included Rep. Jason Ortitay (R-Washington), lobbied against proposed changes in the Allegheny County region. Nordenberg pointed to that effort as what convinced mapmakers to eliminate several municipal splits and the pairing of Ortitay with incumbent Republican Rep. Mike Puskaric (R-Allegheny).

“What I hope this conveys is some sense that this was a thoughtful process, not an exercise in targeting incumbents of either party,” he said.

Nordenberg added both maps are polished enough to sustain criticism and court challenges.

“Even if imperfect, these are good maps that are fair, that are responsive to the requirements of the law, and will serve the interests of the people of Pennsylvania for the next decade.”

Opposition and What’s Next

Republican House Leader Kerry Benninghoff (R-Centre) was the lone “no” vote, arguing both the House and Senate plans are problematic for non-white voters and do too much to protect Democratic incumbents.

“People have tried to justify this map as undoing some wrong or correcting previous partisan gerrymandering,” Benninghoff said before the vote. “They fail to realize that…they [the maps] do not undo those wrongs. They perpetuate them.”

In an eleventh-hour move, Benninghoff on Friday morning offered to fellow commissioners an alternative House map he argued was technically better than the LRC’s final map.

Benninghoff did not say whether his caucus will formally challenge the final House map, but it is allowed to do so in the next 30 days.

The Department of State says candidates must have nomination petitions in by March 8. Meanwhile, the state Supreme Court is set to hear separate arguments in a case that will pick the state’s new Congressional map on Feb. 18.

It’s possible that any of those court challenges could butt up against that timeline, but the agency has not indicated whether it would move back that schedule to accommodate. Gov. Tom Wolf told reporters this week that he was “confident” the primary could still be held on May 17.

Sen. Ward (R-Westmoreland) is one of several state lawmakers who signed a letter asking Congress to delay certifying Pennsylvania’s 2020 electoral vote. Rep. Benninghoff (R-Centre) was among several dozen House lawmakers who asked Congress to object to that vote – despite no evidence that would call that vote into question.