A front-end loader works in front of a pile of road salt, Friday, Jan. 28, 2022, in Chelsea, Mass. Residents and officials in the Northeast and mid-Atlantic regions of the U.S. are bracing for a powerful winter storm expected to produce blizzard conditions Friday and Saturday. (AP Photo/Michael Dwyer) 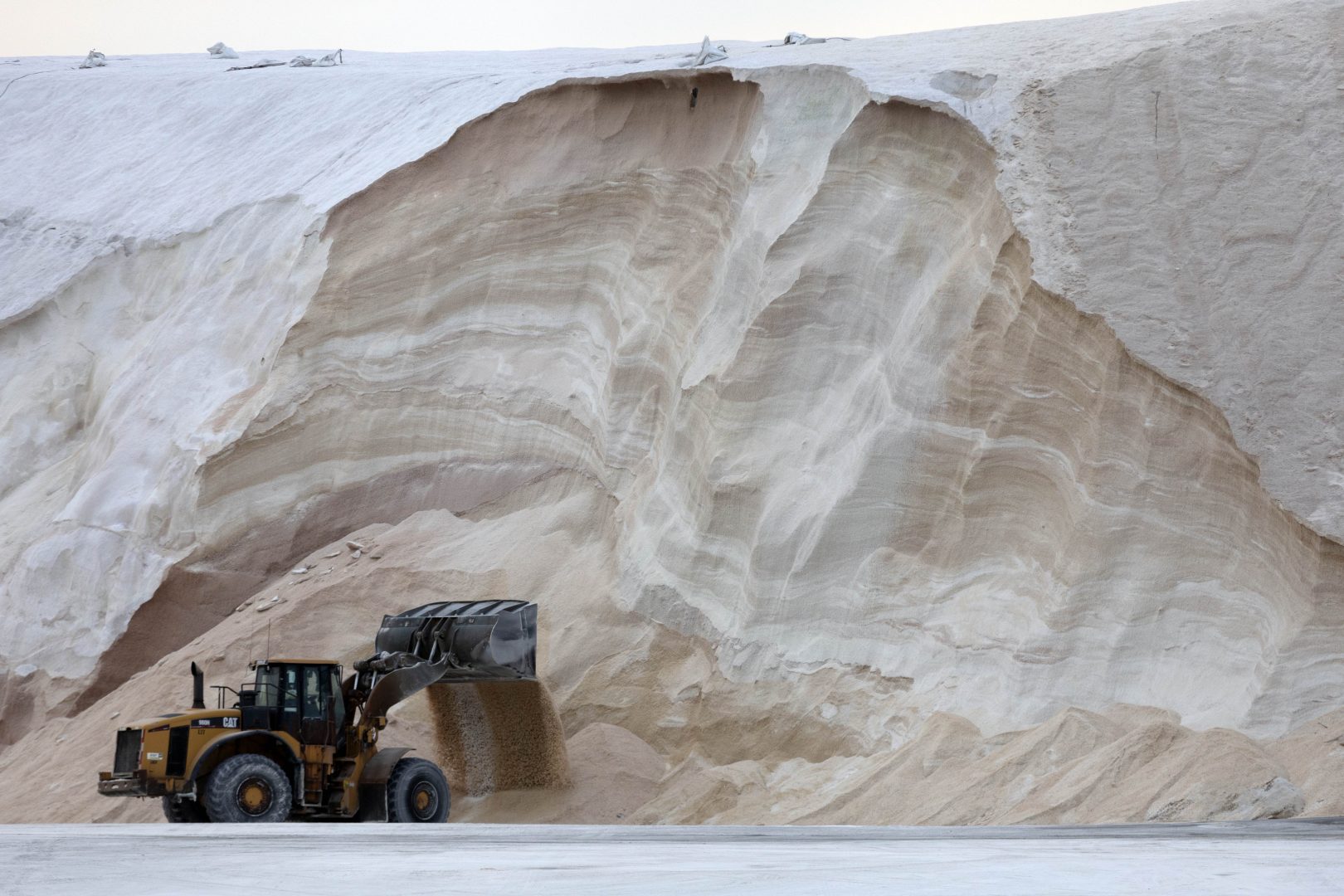 A front-end loader works in front of a pile of road salt, Friday, Jan. 28, 2022, in Chelsea, Mass. Residents and officials in the Northeast and mid-Atlantic regions of the U.S. are bracing for a powerful winter storm expected to produce blizzard conditions Friday and Saturday. (AP Photo/Michael Dwyer)

(Boston)  —  People from New York City to Maine were awakening Saturday to half a foot (15 centimeters) of snow, and forecasters warned that could more than quadruple as a powerful nor’easter kicked up blinding blizzard conditions with the potential for widespread power outages and coastal flooding.

Parts of 10 states and some major population centers — Philadelphia, New York and Boston — were in the path of the storm, which was expected to rage throughout the day. Airlines canceled more than 3,000 flights at some of the nation’s busiest airports. Amtrak suspended or limited service on the Boston-to-Washington corridor.

Officials from Virginia to Maine warned people to stay off the roads amid potential whiteout conditions.

Rhode Island, all of which was under a blizzard warning, banned all nonemergency road travel starting at 8 a.m.

“This is serious. We’re ready for this storm, and we also need Rhode Islanders to be ready,” Gov. Dan McKee said. “The best way to handle this storm is to stay home tomorrow.”

Delaware allowed only essential personnel to drive in two of its three counties starting Friday night. Massachusetts, where forecasters said some isolated pockets could get as much as 30 inches (76 centimeters) of snow, banned heavy trucks from interstate highways for most of Saturday.

Shoppers crammed stores Friday to stock up on food and buy generators and snowblowers ahead of the nor’easter, a type of storm so named because its winds typically blow from the northeast as it churns up the East Coast.

Many hardy New Englanders took the forecast cheerfully and even looked forward to the storm, given its weekend timing.

Dave McGillivray, race director for the Boston Marathon, jokingly invited the public to his suburban Boston home on Saturday for a free snow shoveling clinic. “I will provide the driveway and multiple walkways to ensure your training is conducted in the most life-like situation,” he said.

Marc Rudkowski, 28, bought French bread and wine Friday at the Star Market in Cambridge, Massachusetts, along with balloons and toys for his dog, who turned 1 on Friday.

But there were some concerns about hoarding amid ongoing supply chain issues caused by the pandemic. New England supermarket giant Stop & Shop pleaded with customers to practice restraint.

“We ask shoppers to buy what they need and save some for their neighbors,” the chain said in a statement.

Parts of 10 states were under blizzard warnings: Maine, New Hampshire, Massachusetts, Rhode Island, Connecticut, New York, New Jersey, Delaware, Maryland and Virginia. Areas closest to the coast were expected to bear the brunt of the storm, which could bring wind gusts as high as 70 mph (113 kph) in New England.

Coastal New Jersey was forecast to get as much as 18 inches (46 centimeters) of snow and eastern Long Island up to 17 inches (43 centimeters). Philadelphia, New York City, and parts of the Delmarva Peninsula in Delaware, Maryland and Virginia could get 10 inches (25 centimeters) or more.

Virginia, where a blizzard this month stranded hundreds of motorists for hours on Interstate 95, did not hesitate to get resources at the ready. In Maryland, the governor mobilized the National Guard.

Washington and Baltimore were forecast to be spared the worst of the snowfall, with only 1 to 3 inches (2.5 to 8 centimeters) and 5 inches (13 centimeters), respectively.

Snow could fall as fast as 5 inches (nearly 13 centimeters) per hour in spots, including Connecticut, where officials worried about having enough snowplow drivers amid shortages caused by the coronavirus pandemic and other issues.

The worst of the storm was expected to blow by Sunday morning into Canada, where several provinces were under warnings.

One saving grace, at least in parts of Massachusetts: The snow should fall light and flaky because it is coming with cold weather that dries it out, said Judah Cohen, a winter storm expert for the commercial firm Atmospheric Environmental Research.